What are the Audio Technica ATH-ANC40BT?

The Audio Technica ATH-ANC40BT are the full package. As well as being wireless headphones, they’re in-ear ones that also offer active noise cancellation.

You don’t often see in-ear sets with this amount of tech. Sure enough, they offer effective noise cancellation and pretty good wireless smarts.

As is so often the case with tech-heavy headphones, though, the sound quality doesn’t match similarly priced conventional competitors’. So, how much you do you want wireless? If the extras really appeal, these make great commuter and exercise earphones. 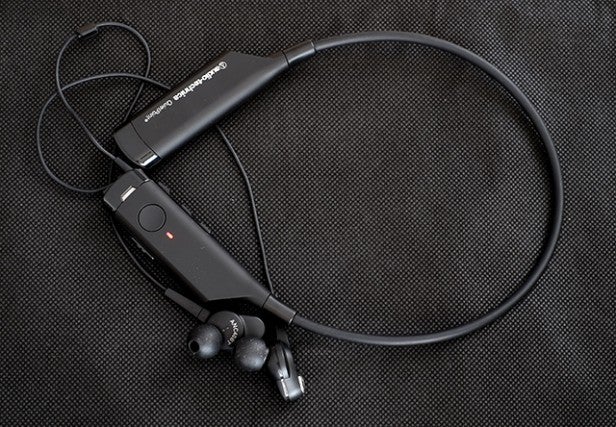 The Audio Technica ATH-ANC40BT design’s actually pretty good. To look at the pictures, you might not think that, though.

They use a large but otherwise traditional traditional earpieces joined together by a neckband that is part chunky remote, part battery. I liked the two parts’ placement as it stopped either pulling on my ears, or running down my chest, as they often do on competing headphones.

As such, they’re great for runners or gym-goers. While they are a little bit eye-catching, a clear ‘gadget’, they probably aren’t any more embarrassing than the next person’s gym gear. 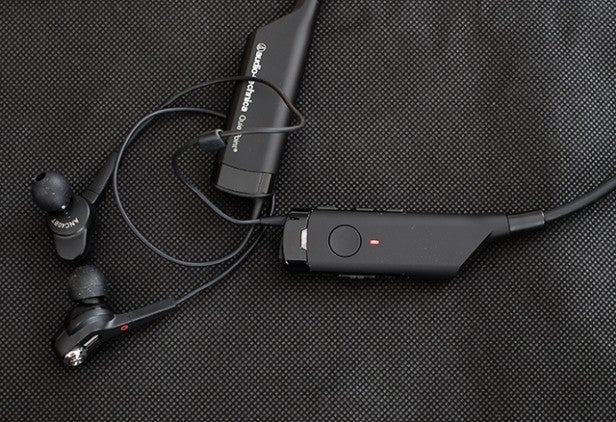 The Audio Technica ATH-ANC40BT band is flexible and has an ever-so-slight tension and elevated friction thanks to a slightly rubbery finish. As such they stay almost still during exercise without feeling like they are gripping your neck, and leave nothing to pull down from your ear canals.

As I said at the beginning: pretty good design.

All the controls sits on the left end of this band (as worn), letting you change the volume and switch the active noise cancellation on and off. It uses the same QuietPoint branding as other cancelling Audio Technica headphones, but the way any of these kind of earphones/headphones work is similar anyway.

They use microphones on the outside to monitor ambient sound, then inject inverse waves to cancel out that sound. That’s why more intense ANC headphones cause a weird sensation of pressure in your ears. While they reduce noise, they actually increase sound pressure. The effect is only very minor here, though. 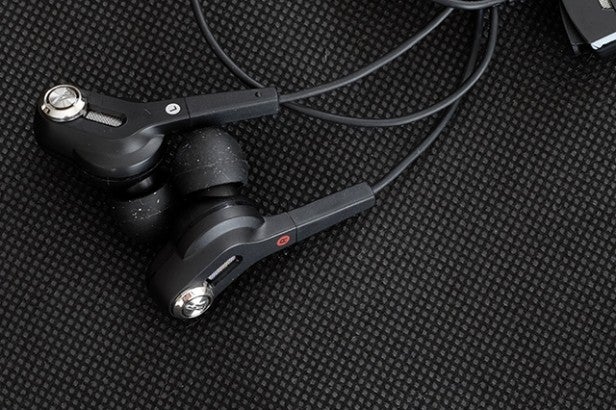 For the most part the ANC works very well. There’s a little switch on the outside of the band that turns it on and off, and it really takes the edge off the noise of public transport. The Audio Technica house sound isn’t exactly a thundering wall of sound, so having good ANC is very welcome and means the earpieces don’t need a too-invasive fit.

It works. But it is not perfect. In certain conditions it seems to create a distracting mid-range drone, as if a certain band isn’t touched by QuietPoint. I remember this happening in the hubbub of a busy pub, but I also heard it in a near-empty car park once. Go figure. It becoming obvious is a rarity, though.

Bluetooth performance is similar, in that it is good but not perfect. Range is perfectly fine, letting me move about through a couple of rooms without break-ups, but there are some less explicable glitches. It varies between phones.

With the Samsung Galaxy S6 Edge Plus+, each session seemed to begin with 30 seconds or so of serious glitchiness before settling down. With the Huawei Mate S Premium I experienced just a couple of brief glitches in several hours of listening spread over a few sessions. Clearly some Bluetooth chipsets just get on better with others, but it is only right to let you know my experiences (the Samsung phone worked perfect with Samsung’s Bluetooth headphones (no surprise) so it’s not as simple as blaming either party outright). 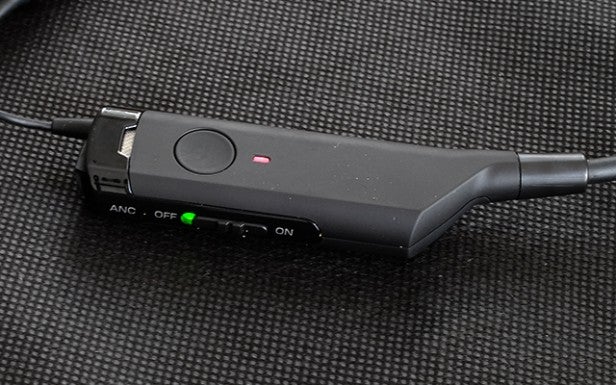 With just Bluetooth and no ANC, Audio Technica says you’ll get 13 hours of use, or eight hours with ANC plus Bluetooth. It has been a bit tricky to reliably assess stamina out in the real work because of one little thing: it’s devilishly easy to leave ANC switched on when you stop listening. There’s no auto-off feature. And it’s worth using most of the time because it has, unusually, virtually no major effect on the sound. ANC generally has a significant effect, either altering the tone or volume level.

No big effect is what you want, though, especially as you can also use the ANC40BT when the battery dies with the included USB-to-3.5mm cable. Most ANC sets have a little 3.5mm socket, but to save space the Audio Technica ATH-ANC40BT output audio from the charge socket, which is smart. 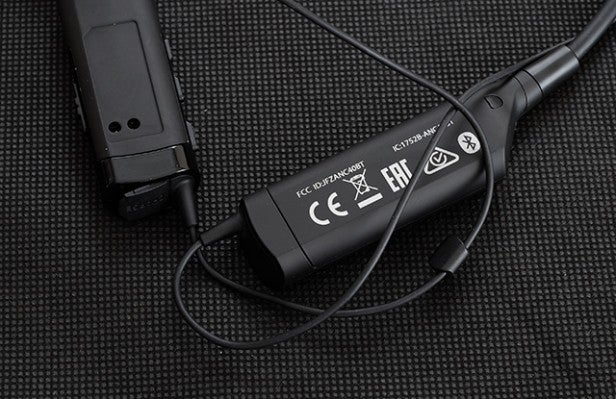 You have a right to expect great sound in any £150 pair of earphones, even if they have Bluetooth wireless and noise cancellation. Do the Audio Technica ATH-ANC40BT provide it? For the most part, although there are some issues.

Their greatest strength is something that doesn’t instantly hit you over the head, because these are not earphones with a focus on one part of the sound: no club-like banging bass or ultra-intense treble. There’s more of an even balance than that.

So while the bass’s really quite excellent quality won’t strike you on first trying them on, it is certainly there. It is fast and intricate, a lot more disciplined and taut than the £50-70 earphones I had been testing beforehand. In wine critic nonsense-speak you might call it plummy. 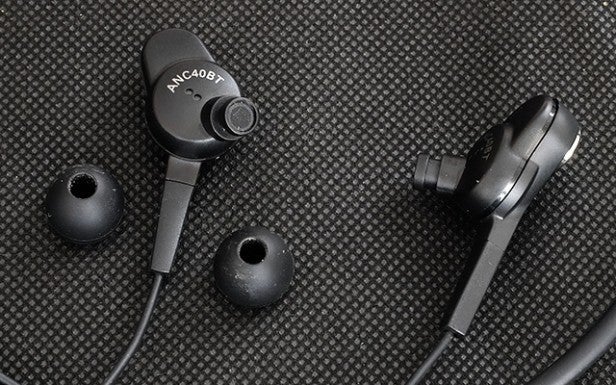 It’s the frequencies higher up that aren’t quite so perfect. For a £150 set they are a little prone to sibilance, and the upper-mids have a slightly hard, synthetic edge that you wouldn’t want to hear in a £100-plus ‘normal’ set of earphones.

These effects aren’t necessarily deal-breakers. They’re things I’ve noticed in comparison with other earphones and headphones, not things that have caused obvious fatigue after an hour or so of listening. But it does mean that, aside from the bass, these might not be the audiophile-quality earphones you were hoping for.

Should I buy the Audio Technica ATH-ANC40BT?

With fairly effective active noise cancellation and, when paired with the right phone, good Bluetooth performance, the Audio Technica ATH-ANC40BT get a lot right. It’s also handy that you can use Bluetooth/ANC independently, go wired when the battery dies and that the sound barely changes as cancellation is switched on and off. That’s a real rarity.

There are little shortfalls in each area that make them less than a sure-fire hit, though. Not everyone’s going to love the look/feel of the neckband, Bluetooth performance isn’t flawless, ANC is bettered by the (more expensive) Bose QC20 and the mids/treble are a little hard and slightly sibilant for the price.

Still, if this is the exact combo of features you’re after, I’m not going to deny having enjoyed using them. I’ll be on the lookout for other potential ‘ultimate’ travel/sport earphone sets for review later this year.

Feature-packed earphones for those wiling to make a slight sound trade-off for extra tech.