What is the Audio-Technica ATH-ADG1X?

The ATH-ADG1X isn’t a particularly impressive name – but make no mistake, these are some seriously good-sounding cans. Armed with two 3.5mm headphone jacks, the headset is compatible with all your favourite devices, extremely comfortable over long periods, and delivers a reference level of audio quality for gaming headsets.

But all of this comes at a cost – £300, in fact – and it’s a real shame that a couple oversights see the Audio-Technica headset fall short of absolute perfection. Nevertheless, if you’re after the best audio quality possible then this is as good as it gets.

There are many gaming headsets that rely on gimmicky features to stand out from the crowd; the Audio-Technica ATH-ADG1X is the polar opposite. Equipped with a pair of 53mm drivers, the headset is large and rather obtrusive.

It’s one of only a few headsets to take on an open-back design, which removes the side panels in favour of a metallic mesh. This allows the headset to ‘breathe’, which in turn creates a more open sound. They do leak a fair bit of sound, however, and you’ll be absorbing ambient sounds too, so consider this carefully before buying. 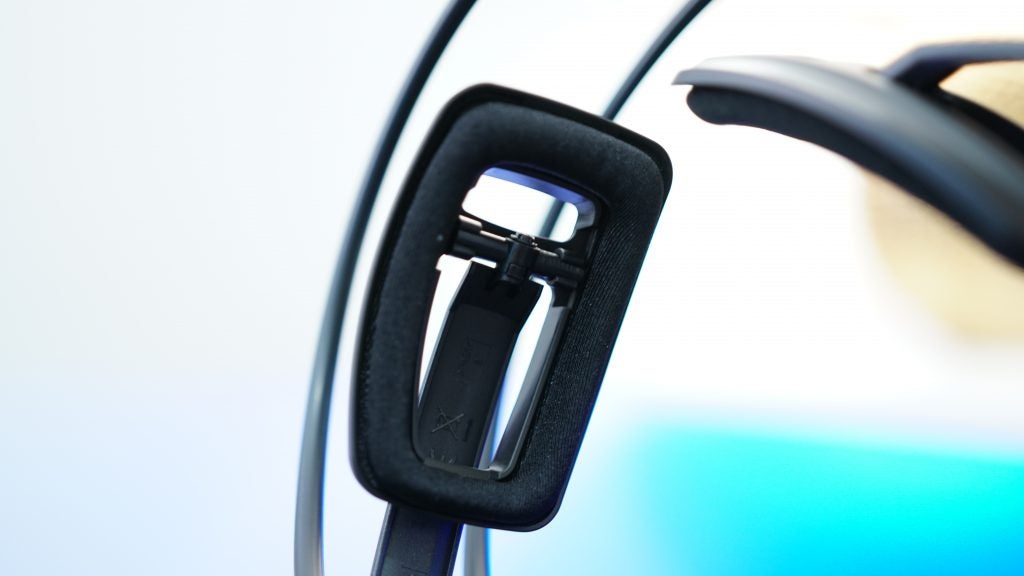 The top of the headset is a little bare. Two rubberised wire pillars create the frame outline that connects the earcups together. Stemming from this is a pair of head support pads, which catch the top of your head with minimal force. These are made of cloth-covered foam, and while the self-adjusting nature of the headset feels a little weird at first, after a few steps of micro-adjustment you can achieve a really impressive fit. The ATH-ADG1X is as easy to use as HyperX’s Revolver, as comfortable as the Corsair Void Pro, and as grippy as the SteelSeries Arctis 7. In short, this headset is damn near-perfect. 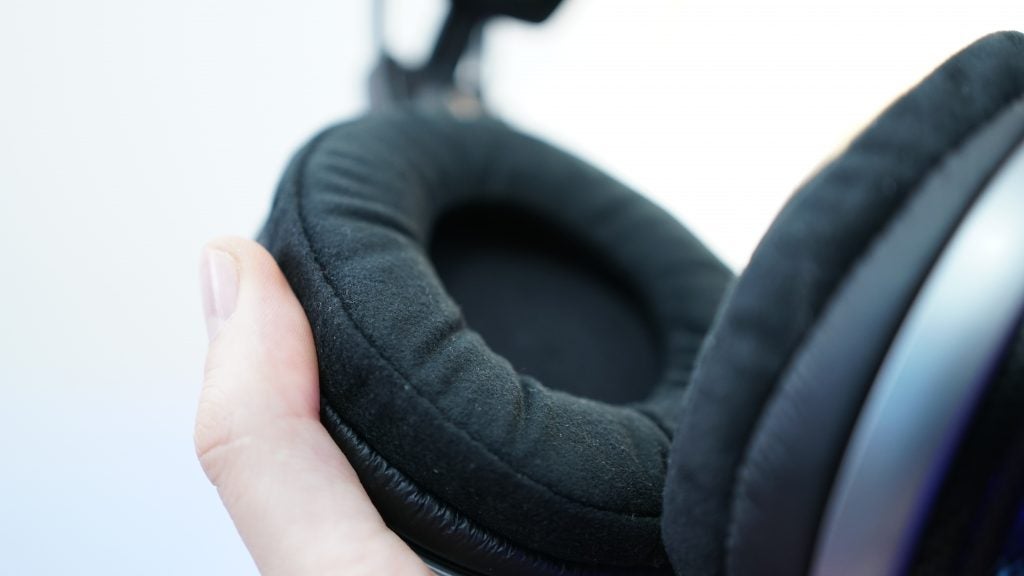 It’s a shame, then, that the same can’t be said of the build quality. It’s good for the most part; with a reassuringly strong mesh overlayed across each ear cup, and a luxurious fleece covering the thick foam earpads. However, the body itself is less impressive. It’s super-lightweight, but the quality of the plastic feels too cheap for a device of this expense. I’m not expecting Audio-Technica to incorporate the aluminium body found on the Shure SRH1840, but a stronger plastic would have been welcome – I’d be a bit nervous about throwing this headset into a rucksack on a regular basis.

The microphone is attached to the ATH-ADG1X on the left-hand side, and it can be raised and lowered with ease. The mic head is covered in a foam pop filter, and is fully adjustable via a flexible stem. Note that the microphone is non-detachable, so if you want to listen to music, watch a movie or edit a video, then you’ll have a small black stem in your peripheral vision. The microphone also adds a slight weight bias to the left earcup, which – although not a deal-breaker – is noticeable. It’s a shame, since this is a serious piece of audio equipment so why restrict its functionality outside of games? 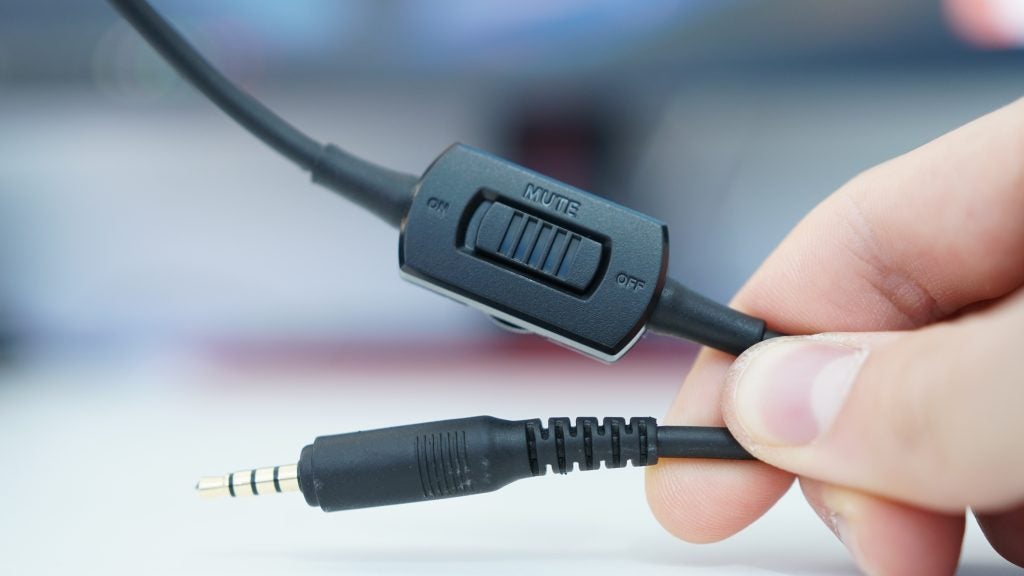 As an analogue headset, the ATH-ADG1X uses a 3.5mm headphone cable as its transmission medium. It also comes with an extension cable that splits the connection into two 3.5mm jacks, separating the microphone and audio signals for use with PC sound devices. The main downside here is that there’s no DAC – something that Astro has covered with the A40 TR for £100 less.

Compromise is a word usually attributed to gaming headsets, and it’s normally the audio quality that suffers as a result of gaming features. This isn’t the case with the ATH-ADG1X; Audio-Technica proves that gaming headsets can deliver a stupendous audio performance. It doesn’t matter whether you’re a gamer, an audiophile or somewhere in between, this is the bee’s knees as far as audio quality is concerned. 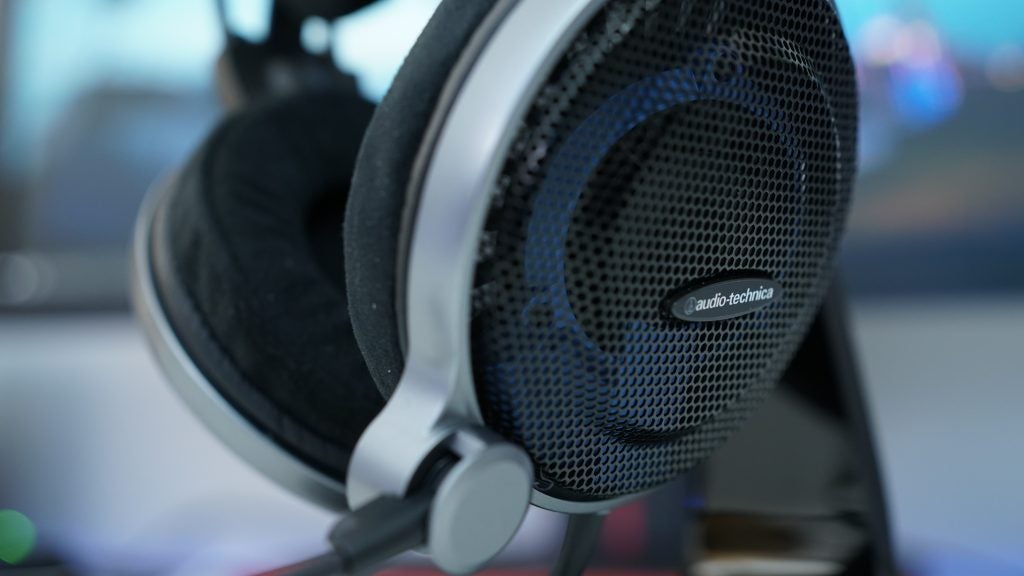 The ATH-ADG1X is right at home with music, and loading up my Tidal Hi-Fi subscription, I was instantly impressed by the sound it produced. The open-back design adds a real lightness to the music, with unrivalled clarity coming from Audio-Technica’s drivers. We’re truly in headphone quality here, and I can’t hammer this point home enough. It doesn’t matter what you play – Jay-Z, Dire Straits… La La Land – it simply outclasses every other gaming headset I’ve tested. Great bass, controlled highs and precise mid-tones. If you appreciate music, you’ll adore these cans.

Gaming is also an area of strength, with my testing split between a gaming PC and PS4 Pro. Battlefield 1 is as action-packed as ever, with strong booms of a tank’s main cannon and unfortunate screams of friendly soldiers as they’re picked off by enemy snipers. The headset handles the dynamic range excellently, and the wide soundstage and airiness of the ATH-ADG1X creates a truly immersive experience. It’s much the same story with Destiny 2, where action-packed firefights amp up nicely over tight multiplayer action in the Crucible. 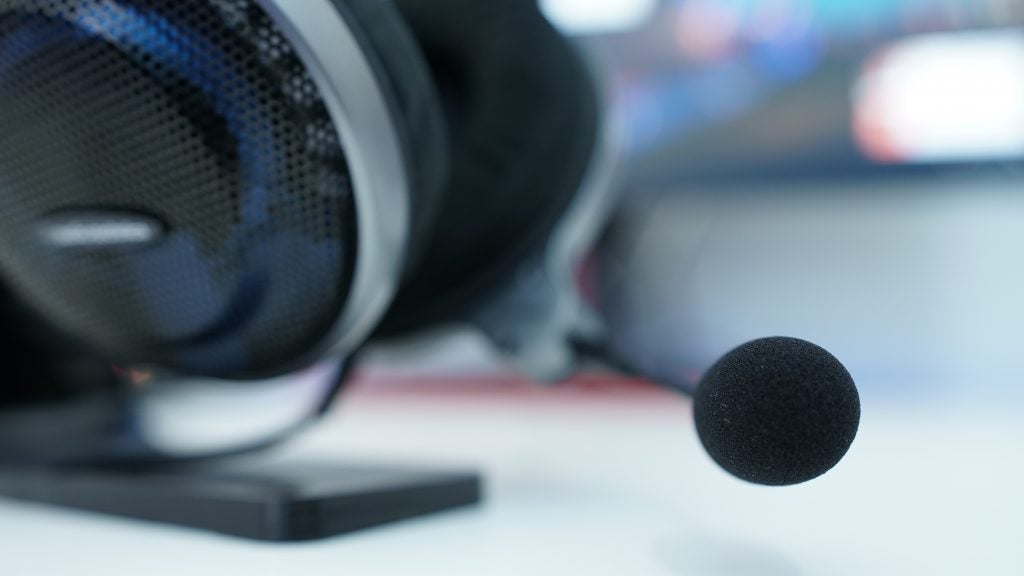 There is a caveat, however. As an analogue device, the headset is at the sole mercy of the device you use to drive it. For my testing, I opted to use Astro’s MixAmp Pro – a decent gaming DAC that provides a clean signal for both the microphone and audio drivers. Step up to something such as Audioquest’s DragonFly and you’ll be treated to an even tighter sound. Conversely, plug the ATH-ADG1X directly into a PS4 controller and you won’t get the same experience. At this level, you really need to be using a separate DAC to truly unlock the benefits of the headset.

The microphone is well implemented on the ATH-ADG1X. While its non-removable nature is z bit annoying, the raw audio quality goes some way to make up for this. There’s a clear pickup that doesn’t at all sound nasally, and isn’t particularly susceptible to popping from ‘p’ sounds. Just be sure to connect to a respectable microphone input for clean audio signals.

Should I buy the Audio-Technica ATH-ADG1X?

The Audio-Technica ATH-ADG1X is my new favourite gaming headset. I love audio, and these are the first cans I’ve used that comfortably trade blows with high-end headphones. It’s disappointing that the microphone isn’t removable, however; as you’d then have the perfect hybrid solution for all your gaming and music listening needs.

If you’re the sort of person who’s happy with the earbuds bundled with your phone then the ATH-ADG1X isn’t for you. But if you want the absolute best audio quality from your gaming headset, then this is it. You’ll just need some very deep pockets – and be willing to invest in a DAC to truly make the most of it.

An audiophile-grade headset that requires some serious financial investment.