The AT-LP5X offers a great combination of performance, convenience and facilities. It can join virtually any system, play virtually any vinyl record and make very reasonable digital copies of LPs, too – it offers impressive performance for the money

They talk a lot, don’t they? And when they suggest “if it ain’t broke, don’t fix it”, they probably never had to keep a product looking fresh and attractive in a competitive marketplace, did they?

The original AT-LP5 was one of the better mid-range phono-stage-equipped, direct-drive, non-DJ turntables of the last decade – and the temptation to leave well alone must have been strong.

Instead, Audio-Technica would seem to have hit on its own variation on its philosophy with the Audio Technica AT-LP5X, which is: “if it ain’t broke, fiddle around the edges of its specification and stick an ’X’ at the end of its model name’.

Does anyone really “design” a turntable these days? Models have pretty much looked the same for the past 60 to 70 years, and anyone who tries to meddle with that formula (which is utterly dictated by function) inevitably ends up with a turntable that just looks weird – and not in a good way.

So the AT-LP5X is recognisably a record player. The J-shaped tonearm is a nice touch, both as a nod to the Audio-Technica turntables with which the company made its name in the 1960s and 70s and for its tracking precision. 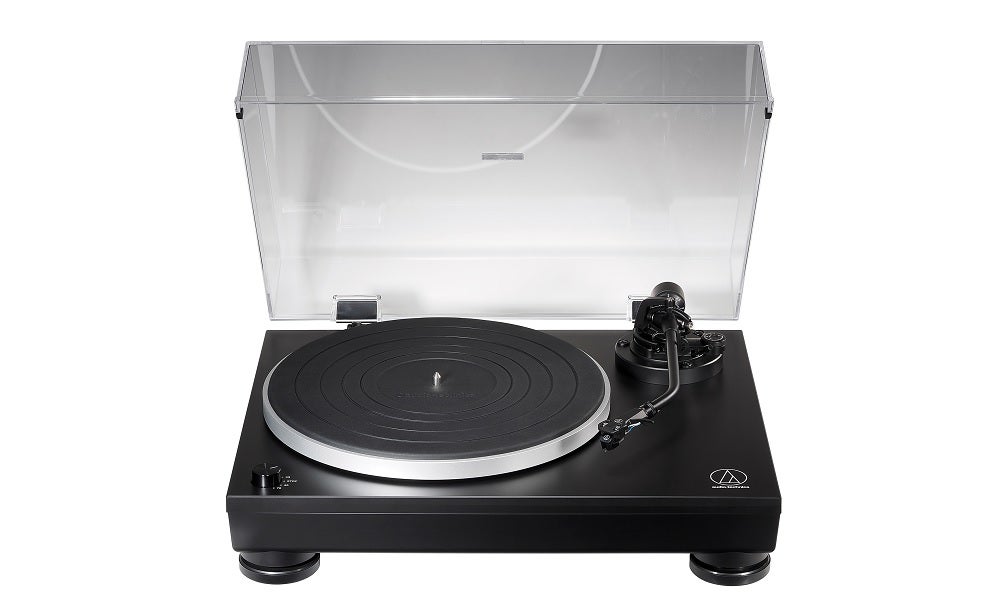 The gimbal suspension at one end of the arm looks impressive and purposeful; the matte-black plinth and the four pliant feet look discreet and sturdy.

Aside from the tonearm and the aluminium platter, which is topped with an extremely hefty rubber slipmat, the plinth features a nicely weighted rotary speed selector/power switch. Everything about the AT-LP5X feels thoroughly well engineered. The materials may not be the most out-and-out luxurious, but everything that moves does so smoothly.

Like the turntable it replaces, the AT-LP5X features an integrated, defeatable phono stage and a USB output for connection to a computer (and, subsequently, fuss-free digital copies of your rare and/or precious vinyl).

Unlike the AT-LP5, however, the LP5X has a phono stage that’s switchable for both moving magnet and moving coil cartridges. And unlike the LP5, this new model can play at 78rpm as well as 33.3 and 45. The interest in moving coil cartridges and 78rpm discs among people spending this sort of money on a record player is questionable, but they’re nice features to have nonetheless. 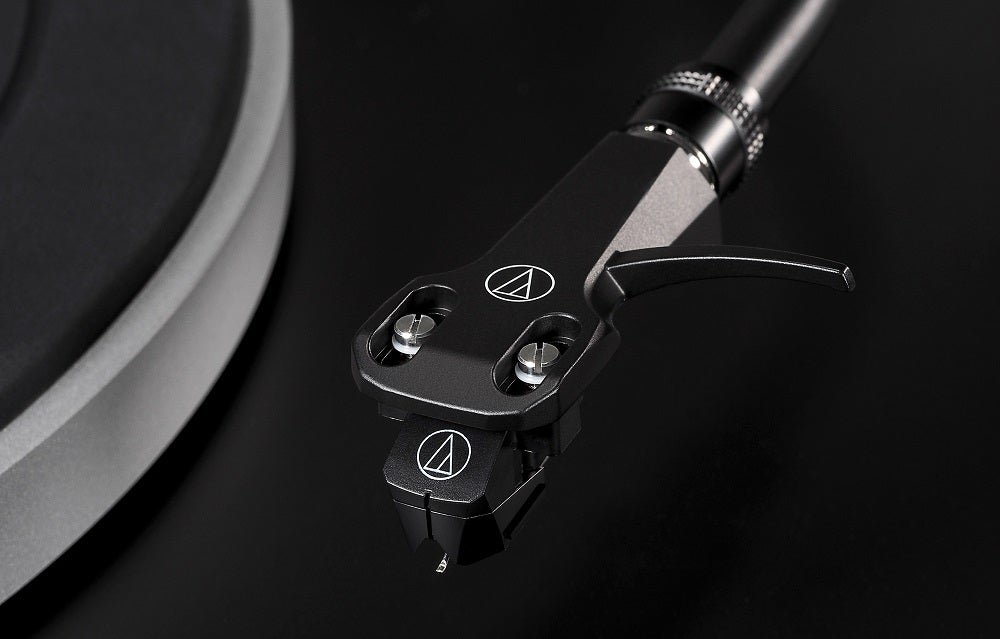 Like the AT-LP5, the LP5X comes with a cartridge already attached to its removable headshell. This time it’s an AT-VM95E, rather than the AT-VM95 of the outgoing deck. It’s a very capable moving magnet cartridge, specified in part for its low resonance and high-frequency sweetness, and it works well at both 33.3 and 45rpm speeds.

If you’re one of the few who’s been lured in by the Audio-Technica’s ability with 78rpm discs, you’ll need a different cartridge. At least it will be very easy to change.

And like the AT-LP5, the LP5X is an absolute doddle to set up. It comes with phono connections (complete with ground cable) and a USB cable. The headshell affixes in seconds, the platter and slipmat slide on easily, and the dust cover is simple to attach. All you need to do is set the tracking weight – somewhere between 1.75g and 2g should do it – and you’re ready to play.

Playing into the vinyl format’s hands somewhat with a decently heavyweight reissue of The Upsetters’ Blackboard Jungle Dub lets the Audio-Technica give a remarkably full account of itself.

The AT-LP5X remains completely composed and believable when dealing with the loping, foggy rhythms and tempos. It manages the gradual decay of sounds as they reverberate off into the distance with complete assurance, and it gives the plentiful low frequencies decent weight and momentum. The sense of space that dub is so dependent on is described confidently, the gaps and silences between the actual sounds of the recording given straight edges and due prominence.

The Audio-Technica doesn’t exactly snap into bass sounds – there’s almost a “soft” attack about the entry into low frequency notes – but it controls them well and they certainly don’t hang around any longer than they should.

Switching to a somewhat more disciplined and altogether more modern recording (Thom Yorke’s Anima) shows up a slight lack of body to the LP5X’s bass, but it also allows the deck to show off its high-frequency precision and tonal variation. Treble sounds throughout this album clatter and hiss in the most convincing way, attack resolutely and never suggests they might get out of hand. 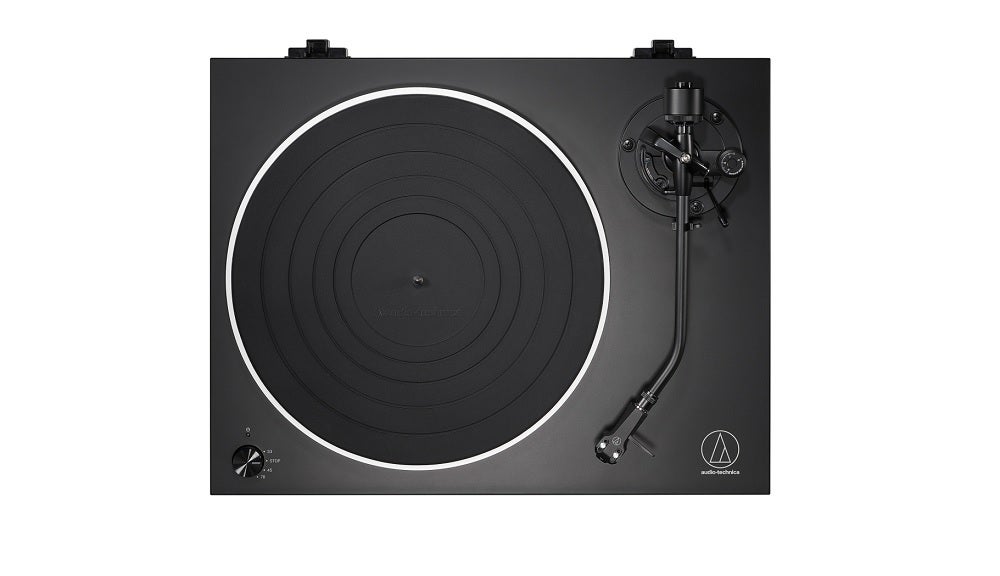 Anima can be a tricky record to organise and control, but the AT-LP5X has enough authority and agility to keep the arrangements in check. And in the mid-range, where the record’s treated vocals sit, it retrieves more than enough detail from the vinyl to make Yorke’s every lisp and rumble sound immediate and explicit.

An elderly pressing of Saint-Saëns’ Carnaval Des Animaux by the London Sinfonietta reveals a slight shortage of out-and-out scale to the LP5X’s presentation, but it also serves to illustrate just how capable the Audio-Technica is at organising even a complex and crowded soundstage. The shape and layout of the performers relative to each other are explained quite clearly.

The integrated phono stage – at least the moving magnet aspect of it – proves capable enough in the context of the LP5X’s price. It’s quite comprehensively bested by Cambridge Audio’s outstanding Duo off-board phono stage, but then the Cambridge costs £249 and doesn’t have a whole record player attached.

The Audio Technica AT-LP5X offers a great combination of performance, convenience and facilities. It can join easily to virtually any system, can play virtually any vinyl record, makes very reasonable digital copies of LPs, too, and sounds impressive for the money.

Sony’s PS-HX500, for example, has a USB output and an integrated moving magnet phono stage, and while it won’t play 78rpm discs, it plays 33.3 and 45rpm equivalents with some panache. It’s probably a slightly more detailed listen than the Audio-Technica too, but it’s made to look expensive by the AT-LP5X.