If you're looking to get into vinyl or DJing, the LP120XUSB will happily get you started. In terms of audio quality, the Rega Planar 1 bests it, but if you're looking for an entry-level turntable with a decent array of features – including ripping vinyl to digital – then it's worth a considering.

The Audio-Technica AT-LP120XUSB is the next-generation model of the LP120USB turntable. Having DJs and music fans in mind, this direct-drive vinyl player comes with a few upgrades and new features along with a refreshed design.

As the saying goes, imitation is the sincerest form of flattery. So, if this really is the case then the Technics SL1200/SL1210 in all its variations must be one of the most flattered products in all of the consumer electronics world.

The latest turntable to take inspiration from the SL1200 is the Audio-Technica AT-LP120XUSB. Despite this, the Audio Technica – as befits a company with more than a bit of experience where turntables are concerned, of course – has enough going on to make a distinct case for itself, not least of which is its full suite of functionality.

So are we meant to ignore the styling and concentrate on the substance? I guess that all depends on how substantial a product the AT-LP120XUSB turns out to be.

Well, as far as design goes, the AT-LP120XUSB looks really quite similar to a Technics SL1200 (in the silver finish of this review sample) or a Technics SL1210 (in the black). 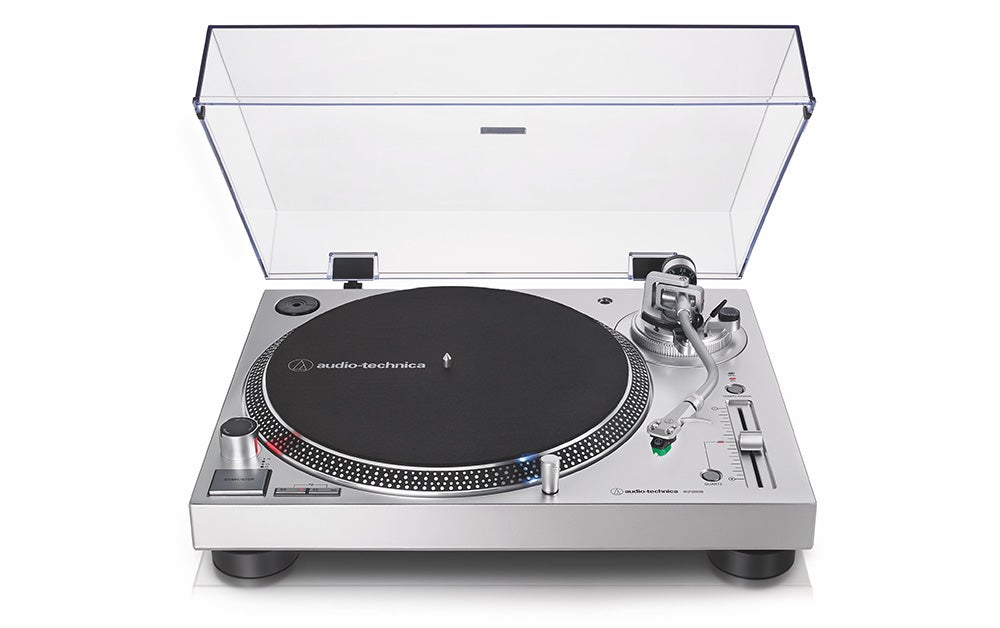 Of course, one record player looks pretty much like the next in the same way that one car looks broadly like another. So as far as the S-shaped tonearm, stroboscope, stop/start button and pitch control are concerned, at first (and second) glance they’re pretty familiar. The same goes for the die-cast aluminium anti-resonance platter.

Presumably the LP120XUSB is different enough to the Technics to prevent Audio-Technica getting sued, but quite where the significant visual differences lie is beyond me.

In tactile terms, it’s quite easy to distinguish between the two – while it feels perfectly well made, the LP120XUSB features far more plastic in its construction than the more expensive Technics.

This is quite an extensive list, so let’s move on from Technics for a minute and just reel them off.

The AT-LP120XUSB is a direct-drive turntable, powered by a hefty DC servo motor. The “quick start” and “quick brake” for which direct-drive is prized comes with all the DJ-orientated accoutrements, too: quartz-locking pitch control (switchable between +/- 8% and +/- 16%), stroboscope, target light, anti-skate adjustment…

And it all sits on four big, extremely compliant, rubbery feet. As such, there’s a welcome degree of “give” should the turntable be leaned upon at any point. The feet also help reject vibration, which can only be a good thing.

The LP120XUSB comes with an Audio-Technica AT-VM95E dual-magnet cartridge pre-fitted to its headshell. Audio-Technica has decades of experience where styluses and cartridges are concerned, and there’s no doubt the LP120XUSB is over-specified in this respect, especially in the context of its overall price. 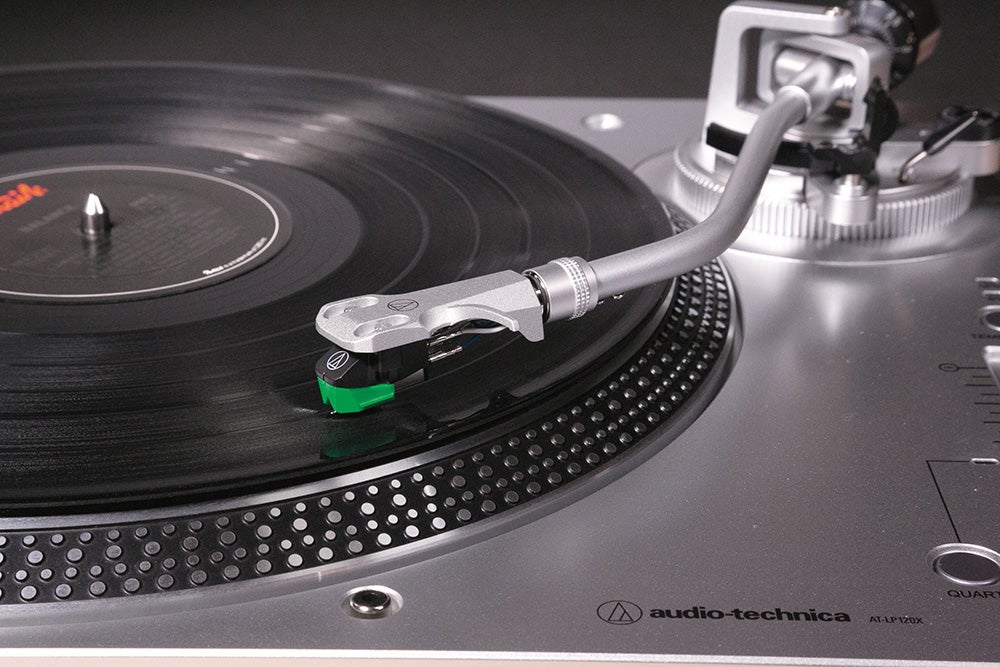 Even more unusually for a record player of this type, the Audio-Technica is fitted with a switchable pre-amplifier. This means it can be plugged straight into any old amplifier, whether or not the amp has a phono stage of its own. Most DJ decks, of course, are intended to be routed into a pre-amplified mixer, so generally don’t bother with their own pre-amplification.

As well as the pre-amp switch, there are stereo RCA outputs and a grounding post on the deck’s rear panel; there’s also a USB Type-B socket. Audio-Technica provides a USB B-to-A cable in the turntable’s packaging (along with stereo RCA and grounding connections), making it possible to connect the LP120XUSB to a computer.

Install your favourite software (Audio-Technica suggests Audacity, which is about as good as these things get) and you’re able to copy vinyl to a computer in real-time. Your chosen software should also allow you to divide a side of vinyl into individual tracks, to add some metadata and to remove the pregnant silences with which many LPs start.

Testing kicks off with a copy of Fat Boy Slim’s Better Living Through Chemistry – because how better to test a wannabe DJ deck than with a record by a wannabe DJ?

Thanks to the direct-drive arrangement, the Audio-Technica’s pitch stability is excellent. The integrated phono stage proves worthwhile, too – it may not be quite able to give Rega’s £90 Fono Mini A2D (which also includes a USB output) a run for its money, but it’s by no means disgraced.

There’s plenty to be said for the LP120XUSB’s sound, too. It doesn’t display the outright solidity of bass that’s ideal – there’s a slightly deflated quality to bass-drum kicks during Everybody Needs A 303 – but the low frequencies are quite rich, and generally move along at a reasonable pace.

The Audio-Technica can seem to drag just very slightly at tempos during bottom-heavy recordings, as the entry into and departure from individual bass notes can be just slightly blurry. But if it’s worthwhile punch you’re after then you can get it here.

A grinding gear-change later and Nico’s Chelsea Girls is spinning. The mournful chanteuse is served up with plenty of detail and character – the mid-range is delivered with subtlety. The voice is integrated nicely into the rest of the frequency information, yet nevertheless exists in its own pocket of well-defined space. The higher frequencies have decent shine and bite, without getting splashy or wearing. 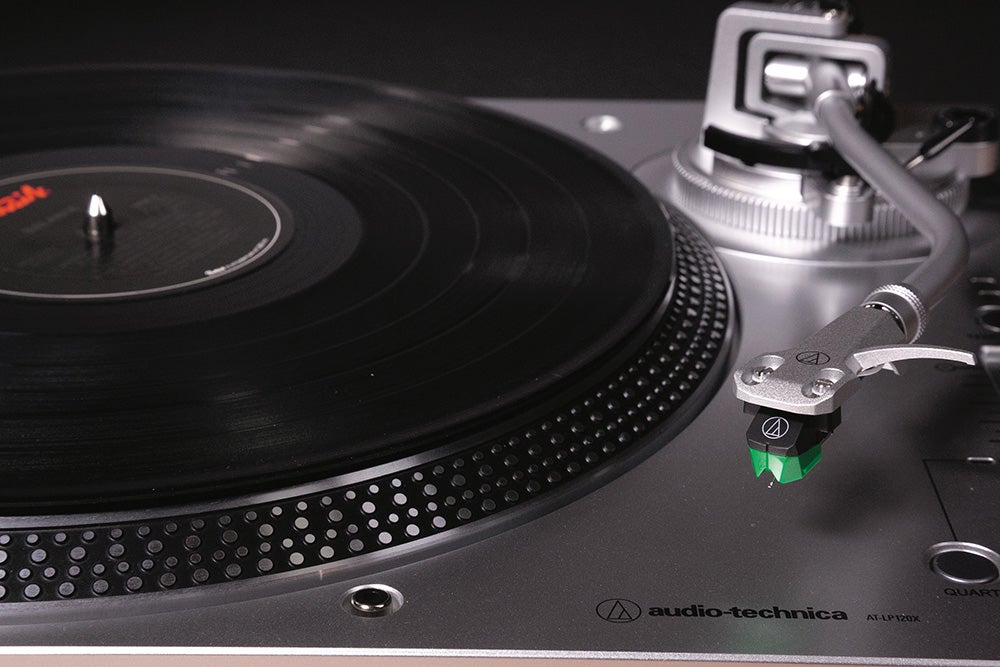 Perhaps not entirely predictably, the AT-LP120XUSB turns out to be, first and foremost, a record player. One that concentrates on the peculiarly vinyl-centric traits of warmth, harmonic nuance and timing, rather than a turntable – a tool for DJs to use while at work.

A listen to Girl Band’s Holding Hands With Jamie confirms it: the Audio-Technica deals with the nosebleed dynamics well, establishing a convincing soundstage, and integrates the entire frequency range pretty smoothly.

It makes reasonably faithful digital copies, too. A little of the excitement, and more than a little of the timing precision, is lost during the translation from vinyl to hard drive. However, for those who have rare, or less-than pristine vinyl that they’d rather not keep taking out of its sleeve, the LP120XUSB is a useful and easy-to-operate method of analogue-to-digital transfer.

Ultimately, its sound is a little soft at the bottom of the frequency range, and it plays things a little too safe at the opposite end. But this doesn’t take away from the fact that there’s plenty here for the money, much of which will prove useful, no matter if you want to be a DJ or a vinyl archivist.

You should buy the Audio-Technica AT-LP120XUSB if…

The LP120XUSB comes kitted out with out with plenty of accoutrements. Factor in its smooth and substantial build quality, resistance to vibration, and its ability to play at 78rpm as well as 33.3 and 45, and this deck has a welcome feature set for the price.

You shouldn’t buy the Audio-Technica AT-LP120XUSB if…

In absolute terms – and “absolute” in this instance means “audio” – the Audio-Technica AT-LP120XUSB is a little off the pace. It can be bettered, in terms of outright audio fidelity, by Rega’s very similarly priced Planar 1. However, it should be noted that the Rega is “just” a record player, and a belt-driven record player at that.