Audio Pro has a problem with wires. The 34 year old Swedish audio specialist has developed a laser-like focus on wireless products in recent years and its latest speaker system takes this to new extremes.

The catchily named ‘LV2e’ is a wireless, lossless, speaker system aimed at space saving audiophiles with a hatred of clutter. The concept is simple: the LV2e system uses a dedicated, protected wireless protocol which is built into each speaker and allows transmission in full CD quality. The speakers automatically pair with a driverless USB dongle which can turn any computer, TV, HiFi or dock into the audio source. Easy. 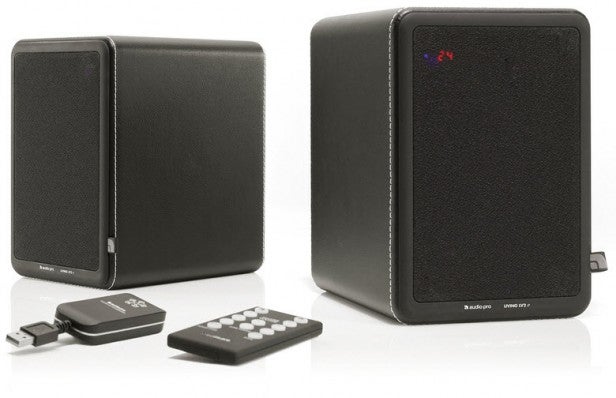 To enable complete independence each speaker has its own power cable and – since they take their stereo source from the dongle – have no need to be physically connected. This means you can position each speaker anywhere in a room. As for the dongle its USB connection can be plugged into a PC or USB AC adaptor and it has a 3.5mm jack for connecting virtually any device. Streaming is almost instantaneous (just a 20ms delay) and since it uses WiFi it has a range which should cover most households.

Where things get a smart added twist is Audio Pro’s dongle which can transmit in three different network frequencies, which it calls ‘house codes’. These can be adjusted on the dongles by simply sliding a switch between positions 1, 2 and 3. What this opens up is the ability to have multiple LV2e speakers around a home. If this sounds familiar it is because Audio Pro sells a similar dongle-only system, comprising the WF100 Wireless Transmitter and RX100 receiver, which is used to add wireless functionality between any source and speaker system. Think Sonos on a budget. 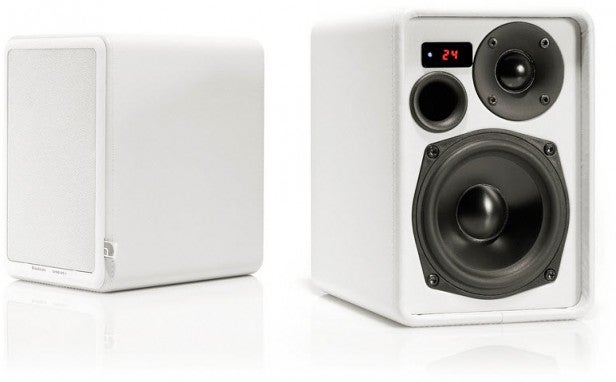 We loved these dongles giving them a TrustedReviews Recommended Award last year so how does the dedicated LV2e system stack up? Out of the box first impressions are promising. The speakers themselves (available in black, white and red) are beautifully made with a premium leather finish and simple controls on the rear to switch house code and zone. Behind the front grill of each speaker in the top left corner is a small LED display which indicates volume level, house code number and zone letter.

Audio Pro is determined to make the LV2e as convenient as possible and at just 210 x 145 x 180mm the speakers are very compact, but they do weigh a hefty  2.9Kg each. The reason for this is Audio Pro has crammed them full of gadgetry designed to belie their small size. Inside each speaker are twin discrete 25W Class D amplifiers driving a 25mm soft dome tweeter and 115mm aluminium woofer. There are also DSP filters and crossovers to optimise audio quality and Burr-Brown DACs which take the audio files at source and process them directly.

Audio Pro has clearly focused on making the LV2e a crowd pleaser. It has opted for a warm sound signature with deep bass and heaps of midrange. The result is the speakers have a cinematic quality where sound is thunderous yet detailed and focused on emotion rather than out and out accuracy. This makes for a highly flexible system that is equally happy across genres applying grit and aggression to dance, rock and hip hop yet treating classical music and jazz with a lighter touch.

Equally impressive is the volume the LV2e generates. The system totals 100W, but the drive from each speaker is such that it would easily overpower higher wattage devices – most notably docks with their narrower output. Of course this touches upon another strength of the LV2e: stereo separation. Given the speakers are not connected to one another they can be positioned anywhere you can stretch to a mains socket and indulge even the biggest stereo junkie (admittedly one of my weaknesses). 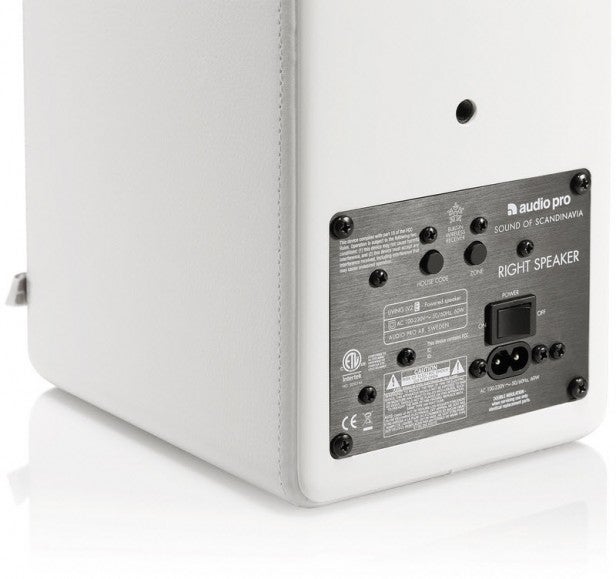 Flaws? While the LV2e produces truly room shaking sound the bass can cut back at maximum volume. This tends to apply only to the most bass heavy tracks though and everything else holds together remarkably well. Audio Pro recognises this as it offers a wireless matching sub for the LV2e, appropriately called the ‘LV SUB‘, which also lets the system play an additional 10db louder. At £550 and given the LV2e’s superb overall performance it would be a luxury. 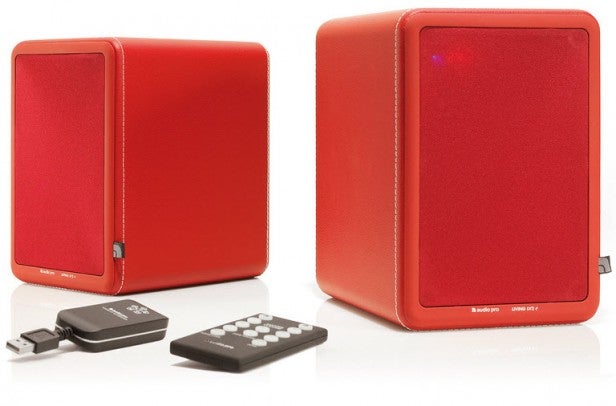 All of which brings us to price and the LV2e’s biggest challenge: Audio Pro itself. The LV2e costs £700 which is by far the black mark against the system as a whole, but such is the elegance of its wireless system and level of performance it is a cost worth paying. Against this is Audio Pro’s own aforementioned WF100 Wireless Transmitter and RX100 receiver bundle, the latter of which has the same integrated Burr Brown DAC, costs just £150 and brings identical functionality to any speaker system. Armed with this the remaining £550 could buy speakers of arguably even better quality and to the exact size and specification you desire.

As such the Audio Pro LV2e is a premium system, but it remains one that is dangerously easy to fall in love with.

”’Verdict”’
The beauty of Audio Pro’s LV2e is in its simplicity: two compact lossless, wireless speakers with integrated DACs and barnstorming performance which pair with a USB dongle that can transmit any audio source. No drivers, no secondary software and no configuration. Combine that with the clever zonal system which allows Sonos-like functionality switching audio between multiple sets of speakers in different locations around the house and you have a product you can easily build around. The fly in the ointment is Audio Pro’s own wireless transmitter and receiver bundle which offers the same functionality at a fraction of the price and lets you choose your own speakers. Then again it would be churlish to deny the LV2e is an exceptional wireless speaker system.