AirPlay has a lot to answer for. The wireless audio and video streaming technology may be a fine solution for Apple products – but it comes with hefty licensing fees, Apple-exclusivity, and is far from perfect with a frequently complex setup and lots of latency. In consequence, many manufacturers have looked elsewhere, but without Apple’s influence their solutions have become fragmented. Audio Pro is a perfect example of this.

The 34-year old Swedish audio specialist has made wireless streaming a primary focus in recent years, built around its own proprietary technology. The technology is excellent (more on which later) as we have seen in its WF100 transmitter, and it has the sonic chops as demonstrated with its LV2e HiFi speakers, but its latest creation takes a very different route. The Living LV1 is a compact (220 x 300 x 100mm) wireless speaker aiming to take a bite out of the premium dock market, which has taken a hit after Apple switched to the new Lightning connector. 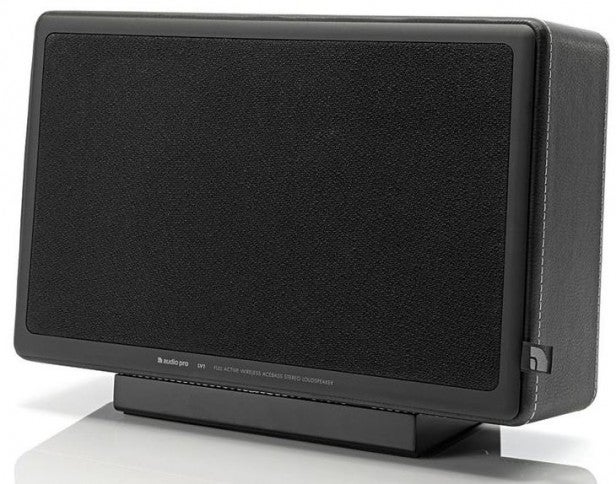 Design
In terms of looks Audio Pro has got the LV1 spot on. Scandinavian design has a reputation for elegant minimalism and once more we have a product living up to the stereotype. Essentially a slim rectangular box, Audio Pro has really thought about the LV1’s build materials. A premium case is wrapped in leather around the sides (red, white and black finishes available) in a way that feels luxurious rather than tacky.

One quirk is the inclusion of a rest. The LV1 sits on it and this places the speaker at an upwards-tilted angle. This is to help audio dispersion and it looks nice, but it is nothing more than a carved block with no electronics or fixings inside.

As for the front grill, it is stretchy fabric and semi-transparent, allowing a digital volume level to be seen. The grill is also removable which reveals volume and control buttons along with some surprisingly narrow fitted drivers and tweeters. On the rear is just a power port and a 3.5mm auxiliary jack which Audio Pro hopes you won’t need much. 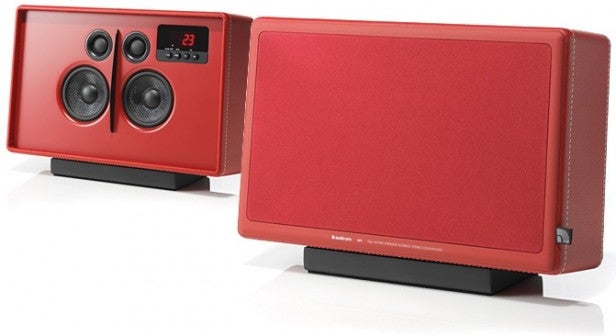 Connectivity
Of course the reason for this is Audio Pro’s aforementioned wireless technology – and it does indeed have much to recommend it. Like AirPlay it is lossless, allowing uncompressed audio files to stream smoothly and, unlike AirPlay, it offers near instantaneous response thanks to a mere 20ms delay (AirPlay tends to be 3-5 seconds). Range is also roughly akin to WiFi which enables streaming all over the home.

Why this becomes important is the technology’s most impressive trick: house codes. Being a proprietary solution it requires dongles at the source, but each dongle has three house codes which can correspond to a different Audio Pro speaker – whether it is an LV1, LV2e or any other Audio Pro model. This means you can switch output destinations at the flick of a switch. Conversely multiple dongles will allow different people to stream to different speakers. Think Sonos without the need for apps or software. 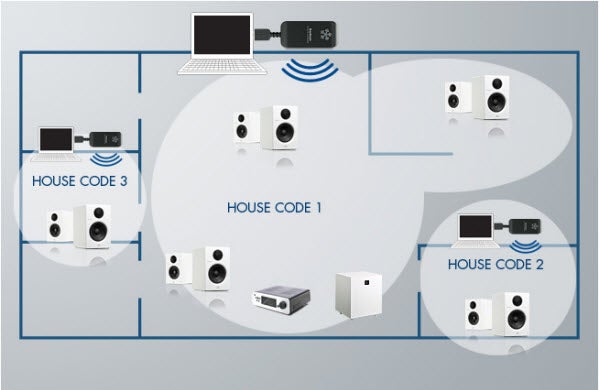 Downsides? By far the most significant is Audio Pro only makes USB dongles and, while they feature a 3.5mm jack to tether a phone or tablet, the lack of a dedicated phone dongle (iPhone or otherwise) is a shame. Given this is a home based system that isn’t a deal breaker, but it would be convenient – especially as the phone would double as a remote control.

To that end Audio Pro includes a dedicated remote control. Like most rivals the remote doesn’t get the same care and attention as the speaker itself and is made from fairly rudimentary plastics, but it has basic controls for power and playback, along with the three house codes.

Performance
Of course with all this trickery what really matters is performance and, on the wireless side of things at least, the Audio Pro works flawlessly. We suffered no drop outs and the number of stutters could be measured on one hand (with fingers to spare) over the course of an entire day.

Unlike AirPlay, PC users will be able to stream from any content source, not just iTunes. This is great for music and movies – in fact any noise that can come out of your PC will come out of the LV1.

The trouble is the quality with which these sounds are reproduced, because sonically, the LV1 isn’t such a success story. On paper the signs are promising. Audio Pro has crammed in four 35W digital Class D amplifiers for two 3.5-inch woofers and two 1-inch soft-dome tweeters. Meanwhile there is a quoted frequency response of 50 – 22,000Hz. So far so good. 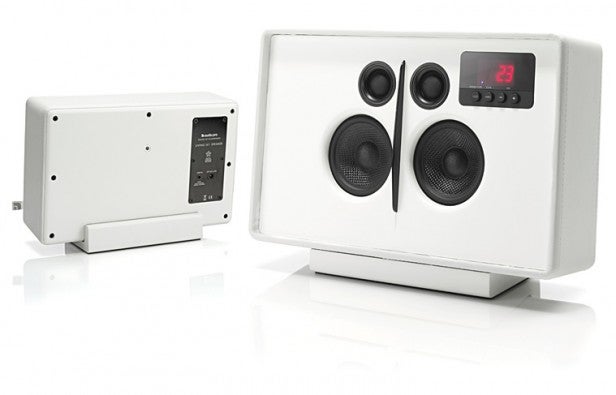 The problem rather is the fixed sound signature. The LV1 has an unusually shrill delivery with piercing treble at the expense of midrange and bass. As such tracks have plenty of detail, but we found they lacked depth and emotion.

With many manufacturers opting for bass-heavy reproduction at the expense of treble (also a problem) the LV1 is a brave differential, but it goes too far and only gets away with it on acoustic or classical music tracks. Consequently while the LV1 can crank up the volume to a reasonable level, it never feels like it is filling a room and lovers of big beats need not apply.

Furthermore there is little stereo separation, something which isn’t helped by the narrow positioning of the woofers and tweeters. Obviously this was not a problem with Audio Pro’s LV2e HiFi speakers that we tested (and loved) back in May, but then again they also delivered a fuller, richer sound – making the LV1’s choice of signature an even stranger deviation.

There are other quirks too. The volume control doesn’t change the volume of the source device, so whatever that is set to is the maximum and you find yourself going back to it regularly to turn it up or down. Yes setting it to maximum fixes this, but it does become something you must remember to do every time you connect the dongle. 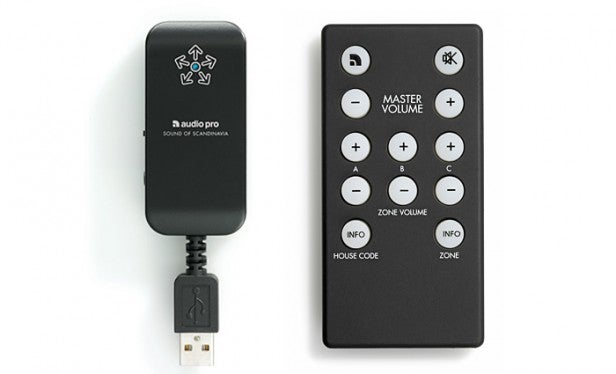 In addition the LV1 auto sleeps to save power. Very sensible. The issue is resuming playback doesn’t trigger it back to life. With sleep happening within 5 minutes it can leave you regularly reaching for the remote or walking over to the speaker to jolt it back to life.

Value
All of which leads us to the biggest problem: price. You will have noticed throughout we have referred to the ‘LV1’ while the review itself is for the ‘LV1TX’, this is because the former is the speaker, while the latter is the optional bundle of speaker plus a TX100 USB dongle. This offers existing Audio Pro product owners the ability to buy the LV1 without having to purchase an unnecessary extra dongle, but the speaker remains a hefty £350 without it and an eye watering £499 with.

More to the point, however, is both the LV1 and LV1TX are too expensive. What makes them so are products like the Arcam rCube which also packs proprietary lossless wireless streaming, but bundles a USB dongle for £350, couples it with far superior audio performance, and adds an integrated battery which makes it portable. 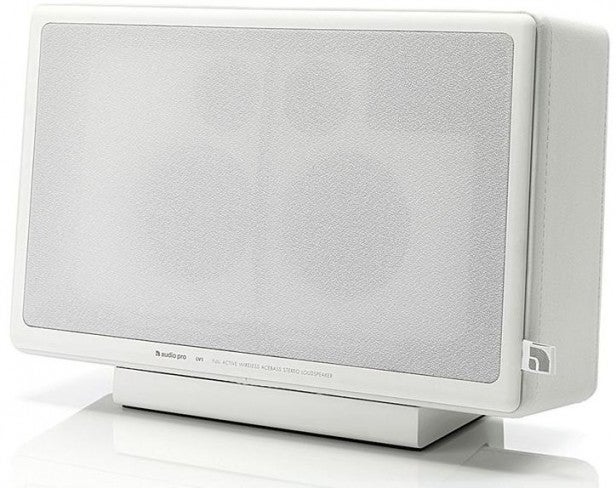 Other sonically superior docks, most notably the Monitor Audio i-deck 200 which is currently doing the rounds at an incredible £150, can be paired with AirPlay via an AirPort Express unit for £89 or even Audio Pro’s own WF100 bundle and you will still come out ahead – both financially and acoustically.

There is much to love about the LV1 in terms of its clean, stylish design and clever integrated lossless streaming technology, but it falls down in the two most crucial areas: performance and price. Quite simply the premium price (particularly with the necessary dongle) puts it into a bracket of rivals with which it cannot compete. Sonically it is lacking bass and midrange and the treble is overly harsh.

We love the Audio Pro wireless system, but you can buy it separately and combine it with other better performing docks for less total expenditure. The LV1 is a missed opportunity, though we suspect Audio Pro’s innovation will see more impressive future attempts.