The Audio Pro A10 sees the Swedish audio brand take a different tack with its wireless speakers. Made for smaller rooms, the compact A10 can be used as part of a multi-room set-up and offers a number of different avenues for playing music, as well as a degree of voice support.

The A10 joins a growing trend of wireless speakers that have ambitions of meshing stylish design and great sound. With the wireless speaker market becoming a popular and crowded one, the A10 pokes its head above most of the rest with a strong offering.

The A10 marks a departure from the rest of Audio Pro’s wireless speaker line-up in terms of it design.

For one, it’s cylindrical not rectangular. As a result it takes up less space and makes positioning easier thanks to its smaller footprint. As it’s not a portable speaker, keep in mind its proximity to a mains plug or extension when moving it about.

Secondly, its aesthetics are more in-keeping with modern tastes. While the speaker grilles on the brand’s Addon range gave them the amusing look of a Koala bear, the A10 is less conspicuous and more elegant. 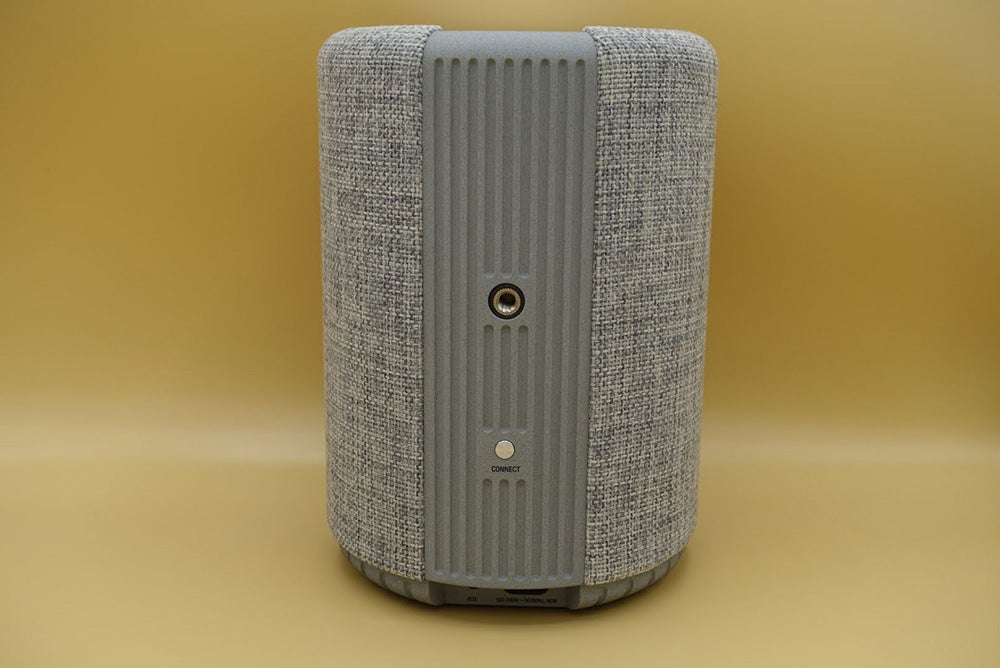 The notch for A10’s wall bracket is round the back, along with the Connect button for setting up the speaker with your wireless network

The textured fabric that wraps round most of the speaker’s circumference looks great, although brush it with your hand and you’ll find it coarse to the touch. It’s a solidly built unit too, heavy enough at 2.7kg to feel substantial, but not too heavy to feel like it’s a drag moving it about.

On the rear is a notch for a wall bracket, with one included in the box if you decide to plant it on a wall. Available in two colours − or two shades of grey as Audio Pro calls it − I’m rather partial to the light grey variant, but the dark grey version is fetching too.

Whatever source you have, the A10 should be able to wring a tune out of it thanks to Bluetooth, Wi-Fi and Airplay support.

There’s also a 3.5mm jack located to the rear for physical connections. Switching through sources is as easy as tapping a button on top of the speaker, or tapping your preferred source in the Audio Pro Control app. For file support, the Audio Pro A10 is compatible with MP3, WMA, AAC, FLAC and Apple Lossless. If you have designs on true High-res audio playback, you’re out of luck. 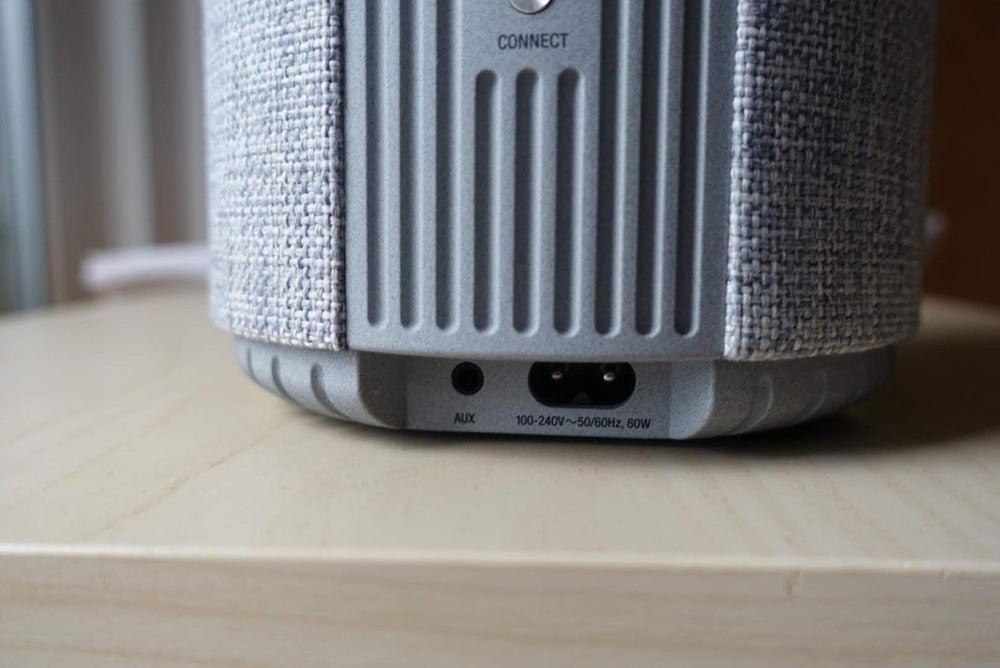 Bluetooth is limited to v4.0 and AirPlay support is first gen, so you don’t get multi-room through Apple.

That said, if you have more than multiple Audio Pro speakers, it can be set up within a multi-room network through the app – assigning zones to each one with the ability to play music to a speaker or all of them.

The control app is competent. If you want to control playback, tweak audio settings or sort out multi-room grouping, the app is the place to do so. However, apart from setting the speaker up, I spent little time using it since it’s less convoluted to use native apps to play content than the control app.

In terms of support for streaming services, the A10 has the big ones covered in Spotify, Tidal, Apple Music and Qobuz, with the app working as a launcher to open your music streaming app of choice. 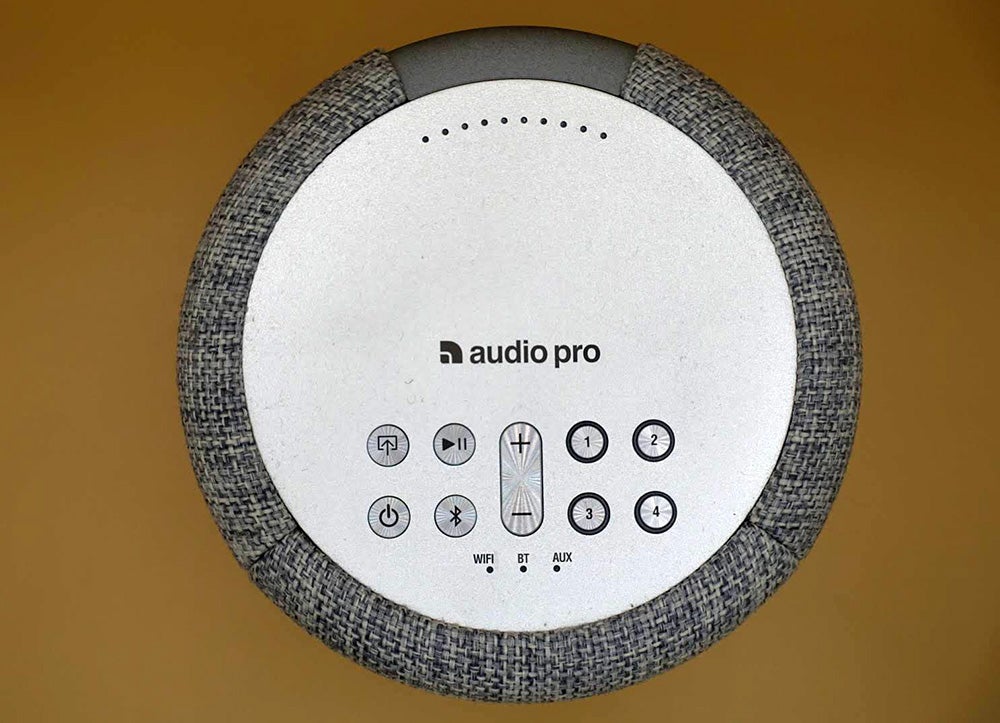 The physical inputs are located on the top surface

Switch to the Wi-Fi input and you can tinker with the four Wi-Fi presets available. Playlists or radio stations can be assigned by pressing one of the numbered buttons for three seconds until you hear a tone – it certainly helps for quick, no fuss access.

Adding to this speaker’s list of talents is Amazon Alexa support, although it’s the ‘Work with Alexa’ variety than built-in support.

Slotting in a BMR (Balanced Mode Radiator) tweeter driver and a woofer into its compact form, the A10 delivers a thoroughly engaging performance.

It doesn’t produce a particularly wide soundstage. However, there were plenty of times where I’d stopped what I was doing and just listen. No matter where I placed the speaker, so long as it was facing outwards, it sounded great.

When it comes to sifting through the detail of a track, the A10 puts in a composed performance. Flinging at it an orchestral composition in the form of Danzon No.2, the Audio Pro A10 emerges with its composure intact, sticking doggedly to the task despite the track’s varying tempo shift, as well as showing some dexterity when dealing with dynamic range. 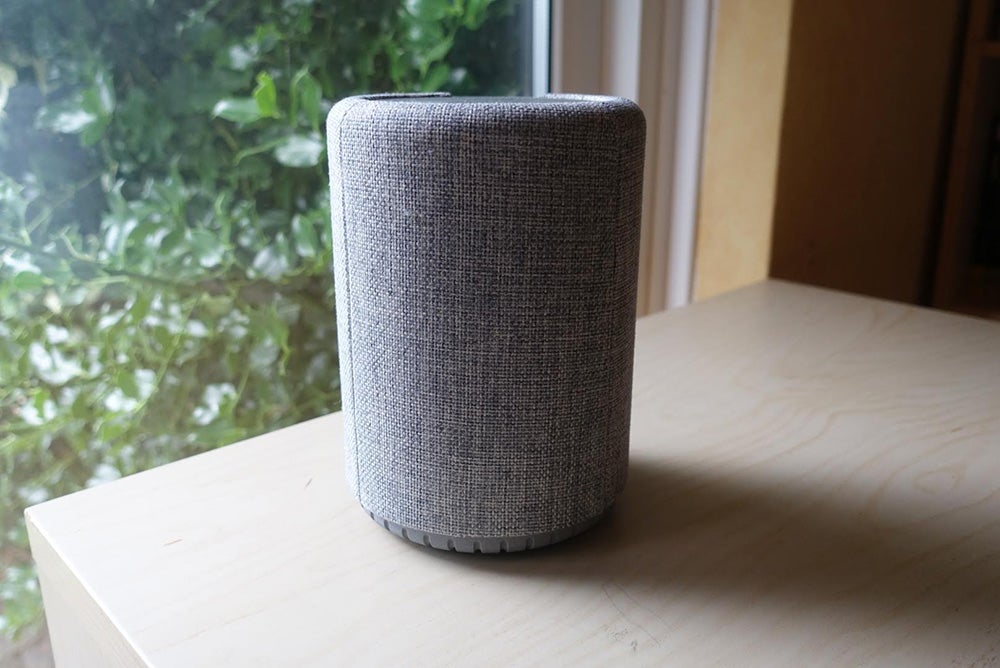 The A10 comes in two colours: light grey and dark grey

Bass performance is decent, and while it does feel restrained it at least doesn’t overspill. Midrange clarity is resolved well, with voices clearly rendered and detail communicated well, right down to the hushed tones of Sam Sparro’s vocals in Black & Gold.

A play of Red Hot Chilli Peppers’ By the Way and the free-flowing character of the A10’s sound becomes apparent, never missing a beat or a strum of a guitar. Prince’s When Doves Cry left me totally engaged, as the beats flow with a sense of purpose and accuracy, the track’s composition never less than tight and compelling with a good sense of timing thrown into the mix, too.

The Audio Pro A10 sounds great across a number of musical genres and is well stocked in terms of features. If you’re after a speaker that plays your music library in a compelling fashion, the A10 is a great affordable choice.

The A10’s design means it won’t take up space on a table or desktop. You will need to place it close to a mains plug to power it, though.

Rivals appear in Apple’s HomePod, which is considerably more expensive and restricted to Apple’s ring-fencing but Apple fans won’t mind that.

And then there’s the Sonos One. It’s more expensive than the A10, but it brings Sonos’ excellent multi-room functionality, built-in Google Assistant, Alexa and great sound. It’s not as stylish as the Audio Pro A10, but offers more functionality.