Like the PC Card Audigy we reviewed some months back, Creative’s new Audigy 2 ZS Video Editor is an attempt to append or adapt existing technology in order to cater for a niche corner of the PC market. As a combination of USB sound card and video capture device it’s a slightly strange contraption that may be perfect for some but only those with very specific requirements.


The box itself is about half the depth of the standard external Audigy sound card case with a shiny black front and the usual silver body. It feels fairly weighty for its size due to the extra electronics packed inside responsible for the video capture side of things.


Creative doesn’t normally skimp on its connections and the addition of video sockets adds to the party. Connections at the front include S-Video in, composite video in and line in together with the microphone input, headphone socket (mini-jack) and optical in and outs. There are also a couple of USB sockets with another two on the back enabling the device to be used as a hub. 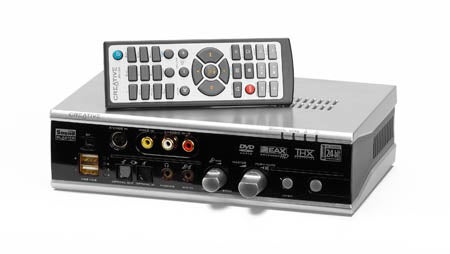 The whole box connects to your PC via USB, so it’s rather ironic that the front of the device sports a Firewire connection. Having this though could be useful if your PC doesn’t already have a Firewire port. However, a better justification for this product would be for digitising and compressing analogue video footage.


Like other Audigy cards, the back of the device has three stereo line outs (as mini-jacks) catering for surround sound. There’s an additional stereo-out and stereo-in using phono plugs, SPDIF out, DIN and S-Video out with yet another set of stereo audio outs.


The number of connections enables the device to be connected to VCRS, DVD players and cameras without having to swap cables all the time. While certainly convenient it’s not quite as flexible as it first appears. For example despite the two sets of stereo line-in connections, only one set can be used at a time – not simultaneously. The video out connections can be used, with the supplied software, to attach a television letting you view the footage. 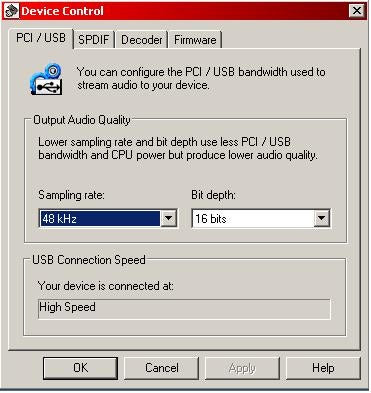 Considering that the recently released Audigy 4 has higher quality converters at a cheaper price the audio features are not the main reason to buy this box. It may be a fully fledged Audigy 2 but a word of warning; USB is still not the most reliable method for audio work. Despite the device control panel letting it be known that it was connected at high speed, the ASIO driver refused to work, complaining of insufficient USB bandwidth. This is obviously dependent on individual machines but I’ve run external hard drives using both Firewire and USB on my test machine with almost identical data rates. If ASIO is important for your work and you must use an external soundcard, Firewire is still the better option.

Within the Creative surround mixer, the analogue audio inputs all exist on the same slider. This means that it’s not possible to individually control the output or input levels of the line, microphone or video in connections. This is perhaps the weakest aspect of the whole device as the level of background noise when the analogue audio inputs are live is substantially higher than a regular Audigy, to the point where there’s a noticeable hiss when listening on headphones. This could impact on the quality of the sound recording, particularly if the incoming levels are low. The extra electronics responsible for the video features or the layout of the board must be responsible for the noise. Quite frankly I found this surprising from a company such as Creative.


The video features then, are clearly the selling point for the device. While I can see the convenience of having audio and video hosted on the same device, Audigy 2 ZS cards currently retail for around £65 with budget PCI video capture cards, such as Leadtek’s Winfast VC100 retailing for as little as £20, although clearly the picture quality of these budget cards won’t be of the same level as the Audigy.


The software package includes ‘SE’ versions of Ulead’s DVD Movie Factory 3 and Video Studio 8. (Given the disturbingly manic grins of the images of the women featured on the discs SE must stand for ‘Smiling Enhanced’). A word of warning though, only these applications can be used for video capture, a restriction difficult to understand. Whilst any program can be used for the editing process, it would be bizarre if audio could only be recorded through a single program rather than the application of your choice so why should video be any different?


Providing that the USB bus speed is fast enough, the hardware MPEG encoding offers excellent results, perfect for converting video footage to DVD. A comparison with the Winfast VC100 card at similar bit-rates easily shows the advantage the Audigy has over the cheaper card: images are sharper with fewer compression artefacts. 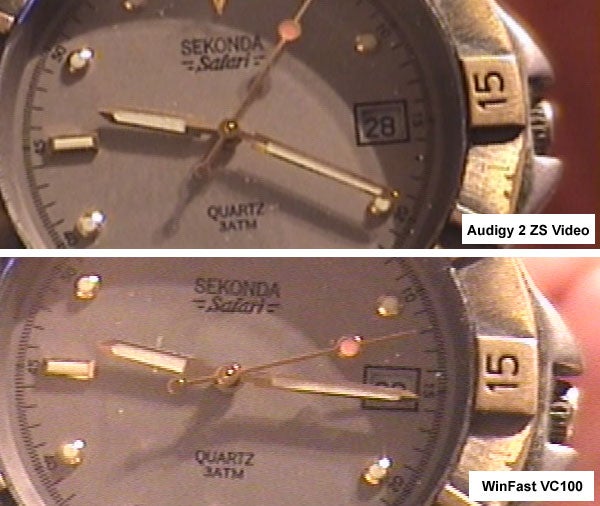 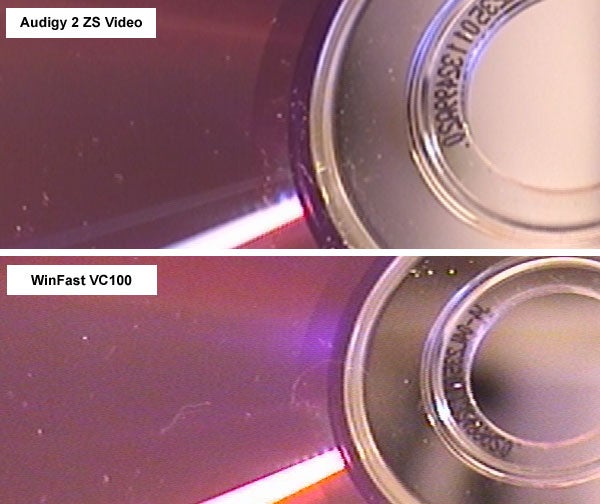 In the examples above, one image has been recorded using the WinFast card, while the next one is courtesy of the Audigy. The compression settings can be altered within the Ulead software but I did miss a frame drop indicator. Problems in the recording process with dropped or corrupted frames will only evident once the footage is played back and a volume level meter would also not go amiss.


Despite the impressive quality captures the just-above average review score reflects the issues that I have with the audio quality and the inherent unpredictability of USB. Restricting video capture to the supplied software is also less than satisfactory. Where the Audigy 2 ZS Video Editor makes sense is if you have a specific set of requirements that necessitates using an external box for audio or video capture from a non-DV camera, (for example if only a laptop is available). If that’s the case then the Audigy is a fairly priced solution that gives excellent picture results but with a less convincing audio performance.