What are the Audeze LCD-X?

The Audeze LCD-X are high-end headphones willing to make no compromises on sound quality. If you want something to plug into your iPhone as you saunter about listening to Taylor Swift, run away now.

However, If you need a pair of headphones to use at home, attached to a dedicated headphone amplifier, the Audeze LCD-X are quite simply among the best pairs in the world. We’re not convinced they’ll appeal more than the Sennheiser HD 800 for many – they’re more expensive and the benefits of the planar magnetic drivers requires even closer, more attentive listening – but if you value soundstage intricacy over pure size, they’re stellar.

Before you get too excited, though, the Audeze LCD-X cost £1399 making them a huge investment even among full-size top-end headphones. 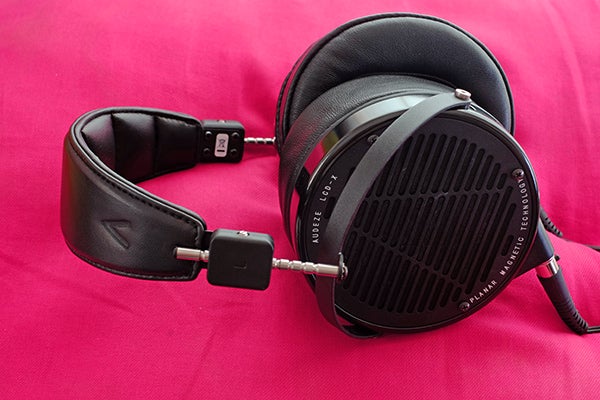 Despite the scary price, the LCD-X headphones aren’t even at the top of Audeze’s range. That spot is reserved for the £1600 LCD-3, widely regarded as some of the best headphones in the world.

The difference detailed on Audeze’s website is that the LCD-X are more efficient, meaning they’re a bit happier to work with mobile devices and lower-power amps. However, we’d advise not reading too much into this, as they’re best used in the home.

For optimum results you can’t rely on the output from a low-end headphone amp circuit, like that of a laptop or phone, and their design isn’t really suitable for portable use. At all. 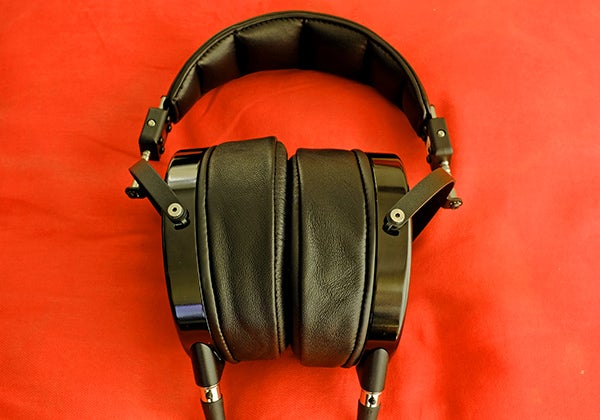 Like most planar magnetic headphones, the Audeze LCD-X are very heavy. At 634g without cable (our own measurements) they have the sort of weight that you’ll notice constantly – and that will only become more obvious if worn while you’re walking about.

The Audeze LCD-X are also huge: very big indeed. There’s nothing wrong with large full-size headphones, especially not high-end ones, we’re just trying to convince you these are not really portable, no matter what Audeze says. Having an open back design means they leak sound significantly too, and offer very little in the way of isolation.

Keep them at home and they are really quite comfortable despite the significant weight. They use gigantic, contoured leather-topped foam pads designed to hug your head and avoid any pressure points forming. predictably, the Audeze LCD-X headband still weighs down on your skull a little, but as the headband too is topped with generously-padded leather, it doesn’t slip over into discomfort. You’re simply conscious the whole time that there’s some significant headgear wrapped around your head. 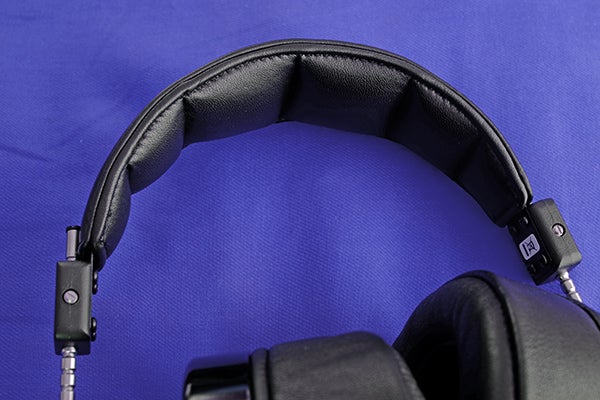 Thoughtfully, Audeze offers a ‘vegan’ version of the LCD-X, too. While the standard edition uses lambskin leather, the vegan pads use microsuede – offering quite a different feel to the synthetic protein leather Audeze could have used. We’ve not tried the microsuede pads, but given the quality of the leather ones, we feel safe assuming they’re very nice. And as well as being ethically non-problematic, they’re likely to heat up your head a bit less.

The design of the Audeze LCD-X is a bit like that of another relatively small planar magnetic headphone maker – HiFiMAN. Driver design encourages a big, round earcup shape, and the style has an industrial bent that gives you some confidence in the build. If you hate this style, your best best in the planar magnetic headphone area are the Oppo PM-1 – although we recommend most people look at the slightly less flashy PM-2, which cost a ‘mere’ £699 while using the same drivers.

Most of the outer parts of the Audeze LCD-X are metal, variously using glossy and matt, textured surfaces. Assessing value versus build at this level is rather ridiculous: what is a £1400 pair of headphones meant to look like? However, we’re happy with the quality on offer. While they don’t hide the screws and seams that make up its construction, every piece feels well put together. 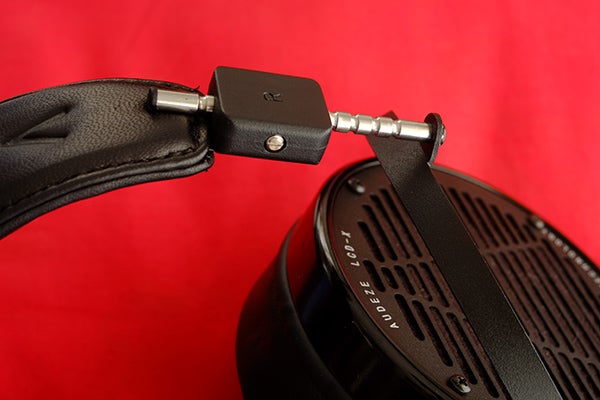 It’s the same situation with the accessories. First, the box they come in is a very tough plastic flight case, the sort you might see a band’s roadie lugging a piece of small outboard equipment in. It’s far removed from the luxury style some might expect, but it’s sensible, practical.

Then there are the cables. The mini-XLR connectors used in the earcups are much larger than the norm, and the hard plastic connectors stick a good way out of the cups. If the Audeze LCD-X actually had any portability points left, this would wipe them out. 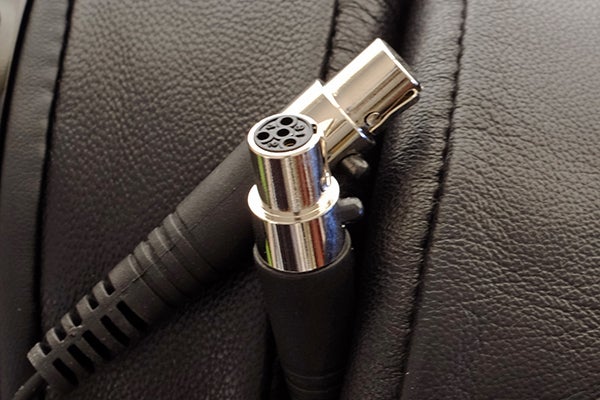 However, looked at form another perspective the use of the XLR points is a great idea. It makes producing balanced cables much cheaper, and you even get one in the box (at least in our sample set). As well as a mini-XLR to 6.3mm jack cable, there’s a mini XLR to XLR cable.

We don’t think most people need to worry too much about balanced cables even when buying headphones this expensive, but it’s a cable structure that’s pretty much the best there is at reducing interference noise. It’s the sort of stuff that headphone nerds lap up, and is important for those thinking about using them as studio headphones. 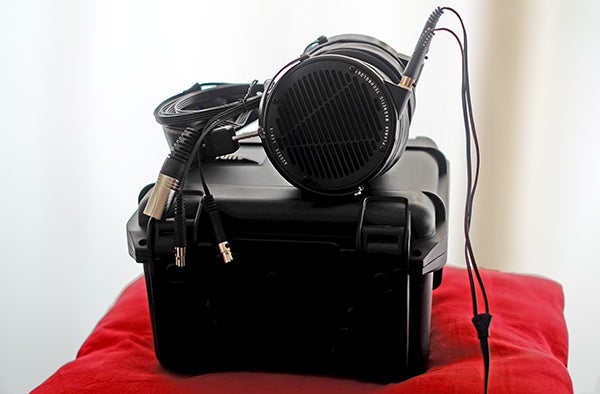 Perhaps the most important technical aspect of the Audeze LCD-X, though, is that they use planar magnetic drivers, rather than the dynamic style found in most cheaper headphones. There’s nothing specifically wrong with dynamic drivers – the fantastic Sennheiser HD800 use them – but  planar magnetic headphones are generally much less susceptible to certain kinds of distortion.

This is down to the basic way they operate – they use much larger, flatter drivers. This both helps explain why headphones like the Audeze LCD-X can offer such pure, low-distortion sound, and is one explanation as to why the things are so bloody heavy. They need pretty sizeable magnets to get the drivers moving.

Now that the tech’s out of the way, we can get onto the good stuff. The Audeze LCD-X sound fantastic, with the sort of supremely natural voicing we’ve come to expect from planar and electrostatic headphones. 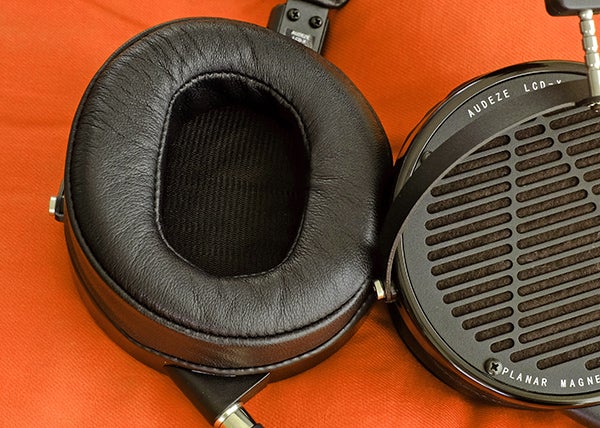 The frequencies that impresses the most are the mids, offering simply fantastic detail and contouring that you just don’t get in 99.5 per cent of headphones, and just about none much under £1000. The mid-range is the most difficult to really master – the most elusive – but it’s also the most important as it takes the brunt of the things we can most easily notice sonic aberrations or failings in: voices.

There’s such refined and sophisticated detailing to the mid-range that vocals and middy instruments are rendered with an incredible amount of spatial information. In other words, the Audeze LCD-X makes vocals appear three-dimensional like almost no other pair.

This sort of depth to the sound – of having a real, natural, three-dimensional character – is heard throughout the treble and bass registers too, but it’s the mids that tell you the Audeze LCD-X are actually worth their money. There’s such definition to them that they have the power of mids that might usually appear forward while being completely neutral, tone-wise. 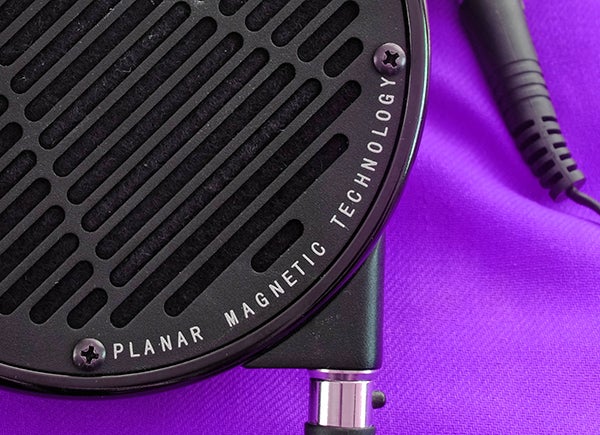 We should say, though, that the Audeze LCD-X’s charms become apparent mostly through close listening – its superb sound requires your active attention to really appreciate more than the Sennheiser HD 800, but more on that in a bit.

For all Audeze’s suggestion that the LCD-X can be used pretty happily with MP3 players and phones, we highly recommend using it with an amp, too. It’s relatively efficient for a planar magnetic set, but this kind of headphone is infamous for its inefficiency, which tells you how loud the sound will be relative to the source output.

When listening through a MacBook Pro headphone output, the soundstage sounds a little cramped and ‘hemmed’ in, spoiling much of the effect of the sound depth. Let’s not get carried away, though – they still sound great with a portable player, just don’t get as close to reaching their potential as, for example, the Sennheiser HD 800.

How do the Audeze LCD-X compare to the other high-end picks? They’re actually quite different to the Sennheiser HD800, which we’ve mentioned a few times already.

Where the Audeze LCD-X sound is expansive because of the mid-range detail, dynamic range and its sculpted precision, the Sennheiser HD800 have an absolutely massive soundstage. It’s truly epic in a manner we’ve rarely heard outside of it and the Sennheiser Orpheus HE 90.

With much more obvious treble microdetail than the Audeze LCD-X, the Sennheiser HD800 sound is immediately more impressive. However, a lot of this is about that first impression – while the gigantic wide sound of the Sennheisers is alluring, the LCD-X’s is probably more natural. 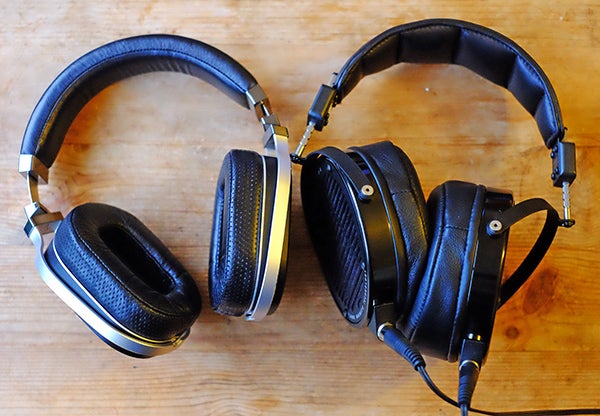 Next to the Oppo PM-1. The Audeze LCD-X offer greater mid-range clarity, although perhaps a little less soundstage width. We rate the Audeze sound a little more highly than the Oppos, although the PM-1 are far more practical. They’re smaller, lighter and work a bit better with lower-power sources.

However, for pure at-home use we’d probably pick the Audeze LCD-X, as the Oppos sound a little bit soft in comparison. 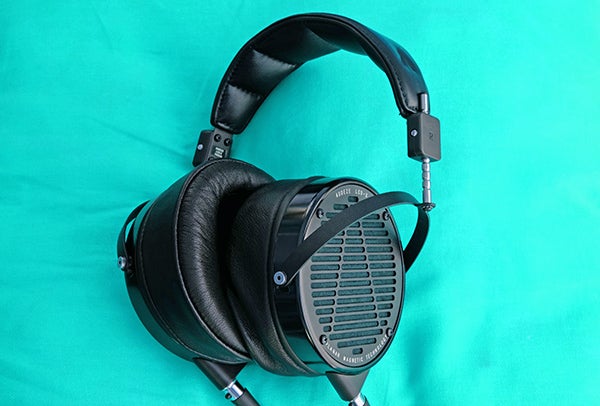 Should I buy the Audeze LCD-X?

The Audeze LCD-X are excellent planar magnetic headphones – superb performers, and able to reproduce vocals on par with or better than any pair of headphones we’ve reviewed, ever. They’re among the very best headphones in the world. Naturally, we’d advise auditioning a few pairs if you’re going to spend this much on headphones, but you can’t go far wrong here.

Well, as long as you’re buying these headphones for the right conditions, that is. Despite being more efficient than Audeze’s other pairs, they’re really not well suited to portable use. Leaky, heavy, large and working best with an amplifier, the Audeze LCD-X are best consigned to wherever you listen to music at home.

Detail freaks may also want to consider the Sennheiser HD800, which offers a more analytical signature.

Audeze’s most practical open-back headphones yet are still not all that practical, but are capable of jaw-dropping sonics.