The Audeara A-01 are wireless headphones offering sound tailored to your hearing. However, unlike their rival, Nuraphone, they use a companion app that puts your through a manual audiologist-style hearing test.

This EQ’ing has a significant effect, but for the price sound quality just isn’t quite good enough. Their active noise cancelling is also nowhere near as effective as that of Bose, and has a flat-out destructive effect as you walk around wearing the Audeara A-01. At the £299, we expect more.

If you love the idea of tailored sound, try the Nuraphone instead. 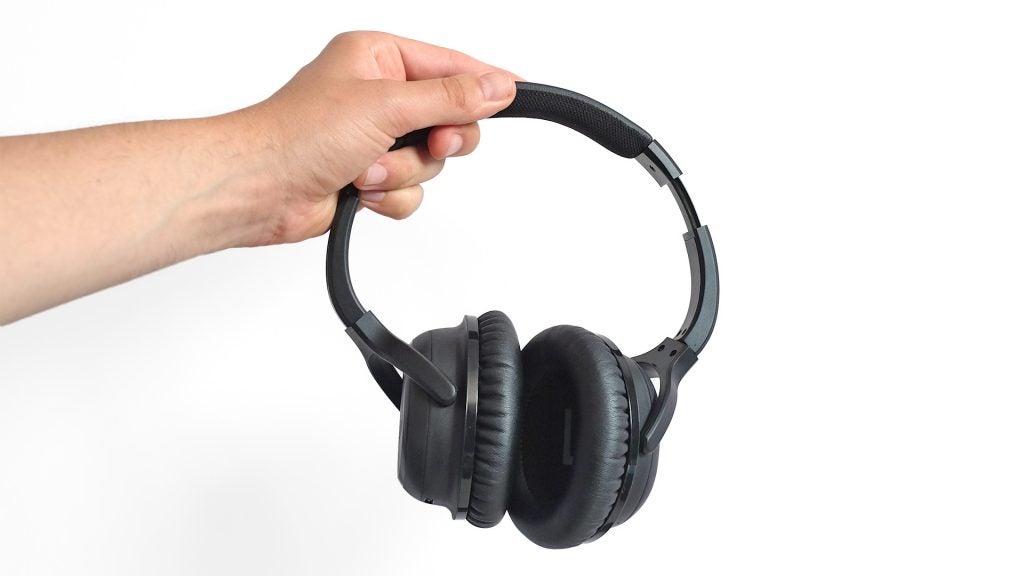 Audeara A-01 – Design and comfort

The Audeara A-01 remind me of old Bose headphones. I’m talking here about models the company released before it levelled-up its designs with the Bose Quietcomfort 25 to appeal to everyone rather than rich, middle-aged executives.

Their cups are all-plastic, with an obvious seam that makes them seem cheaper than they are. The headband bends out and away from your head. It doesn’t make for a slick look.

However, there’s a reason for such a design. It helps regulate the fit, and I do find the Audeara A-01 comfortable. Their synthetic leather pads use thick, soft foam, for a squishy, ear-hugging feel. Again, they remind me of older Bose pairs, this time in a positive sense. 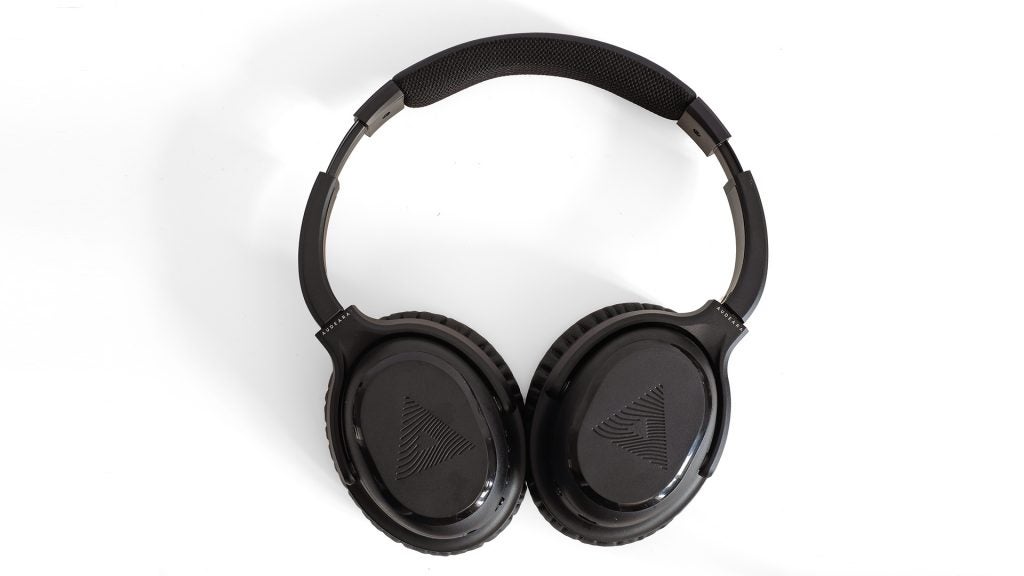 Since the headband and its padding flatten out at the top of your head, the Audeara A-01 do exert some obvious pressure up top. They don’t disappear. However, for a crowd-funded start-up, this is a fairly successful headphone design.

Nothing here even hints at the Audeara A-01’s high price, however. They come across as a Bose alternative in the vein of the Lindy BNX-60 (which look eerily similar). But that pair costs £80, not £300. 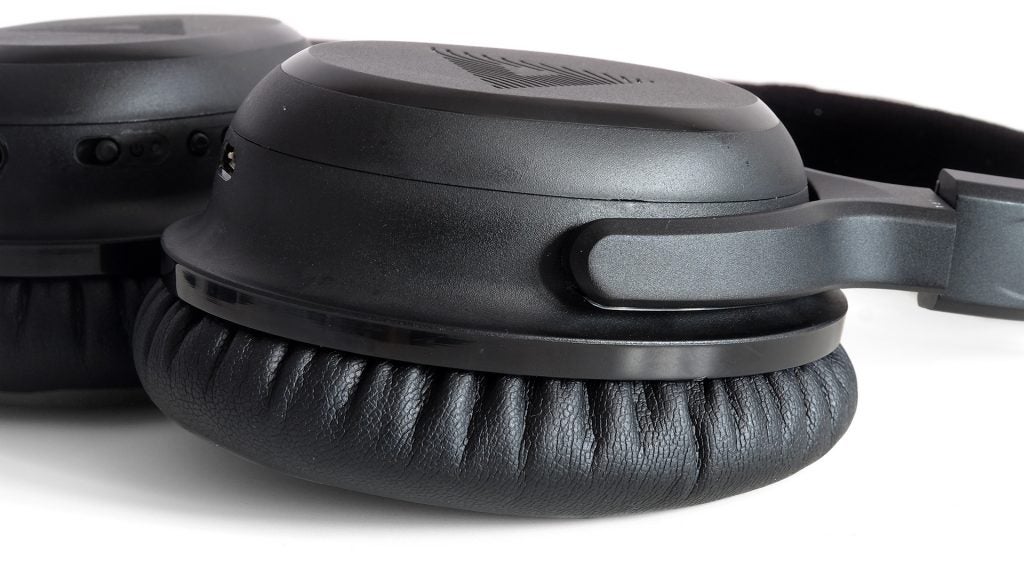 You need to be a little careful with them, too. While the frame is solid enough, the cups aren’t ported. Pushing the pads together creates a vacuum that makes the drivers flex. Don’t do this too often.

The Audeara A-01 come with a semi-hard case, but since the frame doesn’t fold in, these headphones take up more room than the Bose QuietComfort 35 II.

Audeara A-01 — Sound customisation and ANC

There are a few sides to the Audeara A-01’s tech. They’re Bluetooth headphones, and their signal is excellent. You shouldn’t hear any signal blips or cut-outs when your phone is in a pocket.

Audeara says the battery life is “up to 65 hours”, but this is only when the headphones are used wired, with just active noise cancellation active. Turn on sound customisation and use the Audeara A-01 wirelessly, and stamina drops down to a more ordinary – but still good – 35 hours.

The battery is charged using a micro-USB, and these headphones aren’t water-resistant. 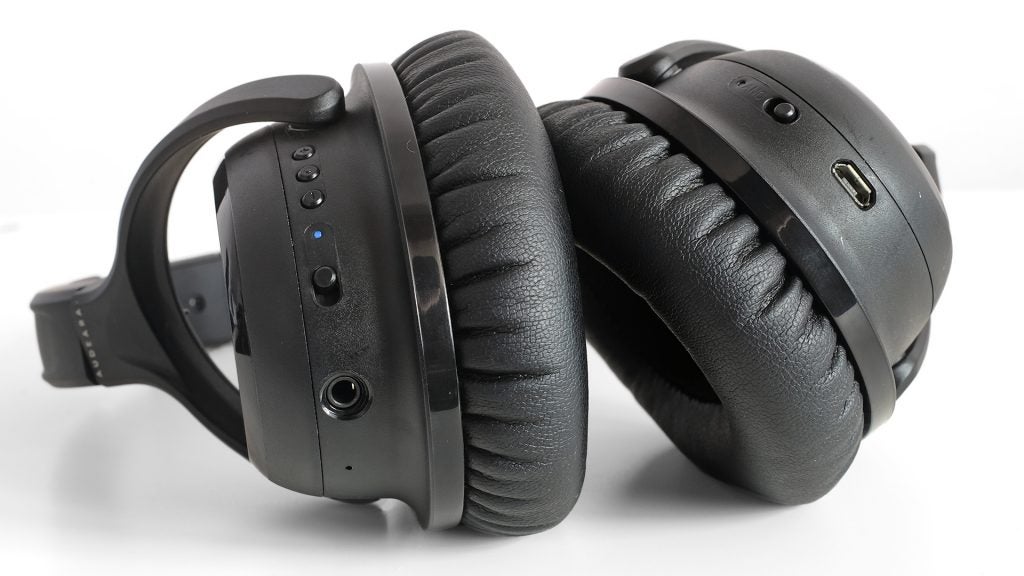 But it’s how the ANC reacts to footfalls that’s the real issue, though. Walk along the pavement and the noise cancellation causes sound pops in time with your steps. In the end, I had to switch off Audeara’s ANC while walking around town.

However, sound tailoring is the main event. Where the Nuraphone uses highly sensitive microphones to see determine how your eardrums react to sound impulses, the Audeara A-01’s app gives you a hearing test. You run up and down the frequency spectrum, reducing the volume at each band until the beeps played are “barely audible”. 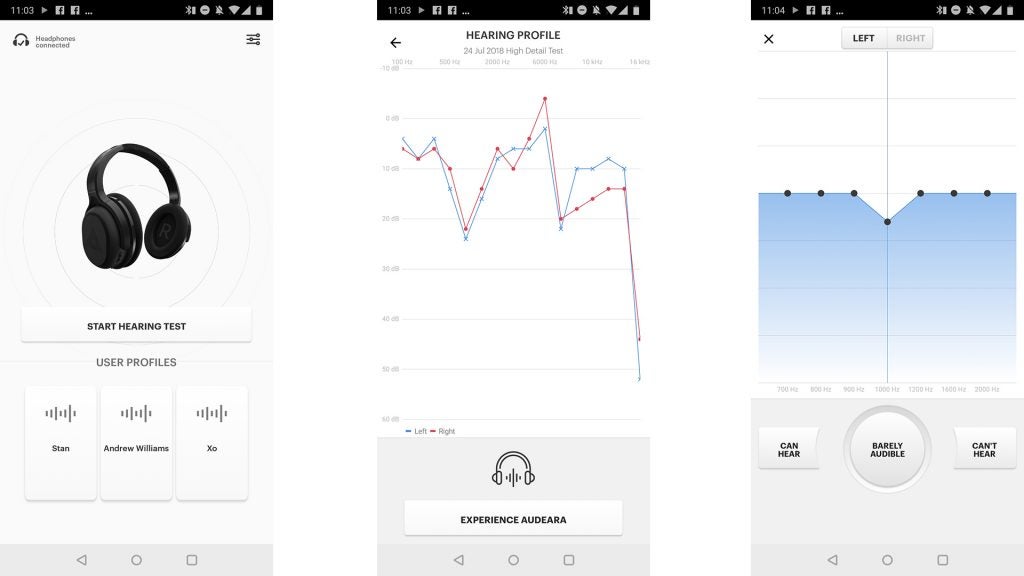 There are three levels of hearing test, with 8, 16 or 32 beep bands. Given the price, the latter is what you’ll want. However, it’s a fairly boring and laborious process, and one you’ll want to fine-tune to ensure you’re consistent with what you take “barely audible” to mean.

After the test is complete, you can apply the “Audeara effect” in 25% increments. This is handy, because ‘100%’ will most likely sound strange at first. It highlights the difference in hearing between your two ears, if there is one, which makes the channel balance sound skewed.

Your brain already compensates for these differences in hearing 24/7. And the process of re-acclimatising to the A-01’s “fixed” profile isn’t the same, and not as quick, as when you put on a pair of glasses. 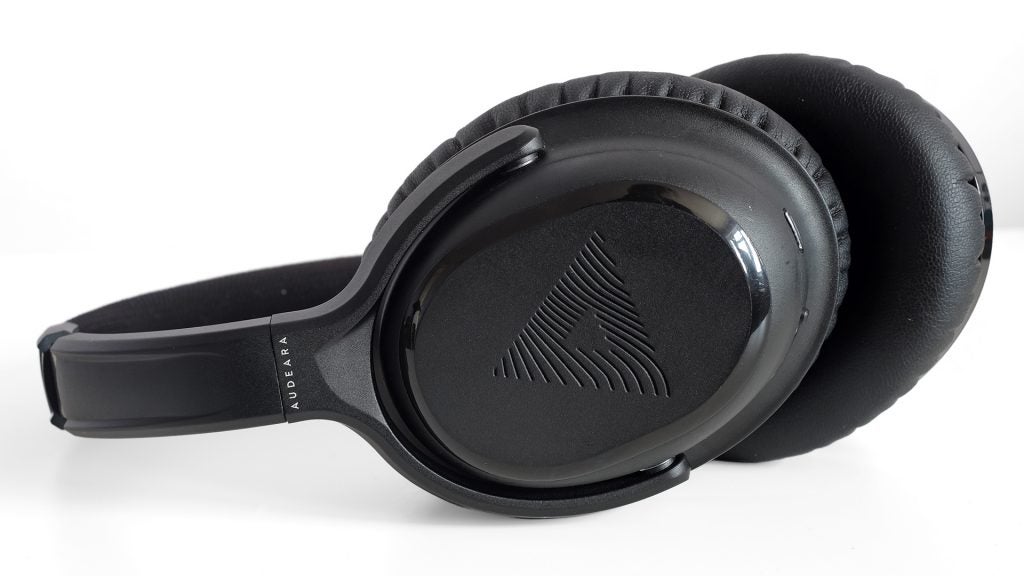 Before using any of Audeara’s sound optimisation, note that the A-01 don’t sound good for a higher-end headphone. The bass is too weighty; it bleeds into the mids. It’s flabby, too. Plus mids lack definition. These two factors leave the A-01 sounding vague and sloppy for a £300 headphone. In fact, they sound more like a £50 pair.

Applying Audeara EQ tighens up the bass and distinctly improves mid-range definition. I tried creating some “fake profiles” with flatter hearing than my own, and the gradual lessening of bass and promotion of the mids seems to be consistent, no matter how well you hear. 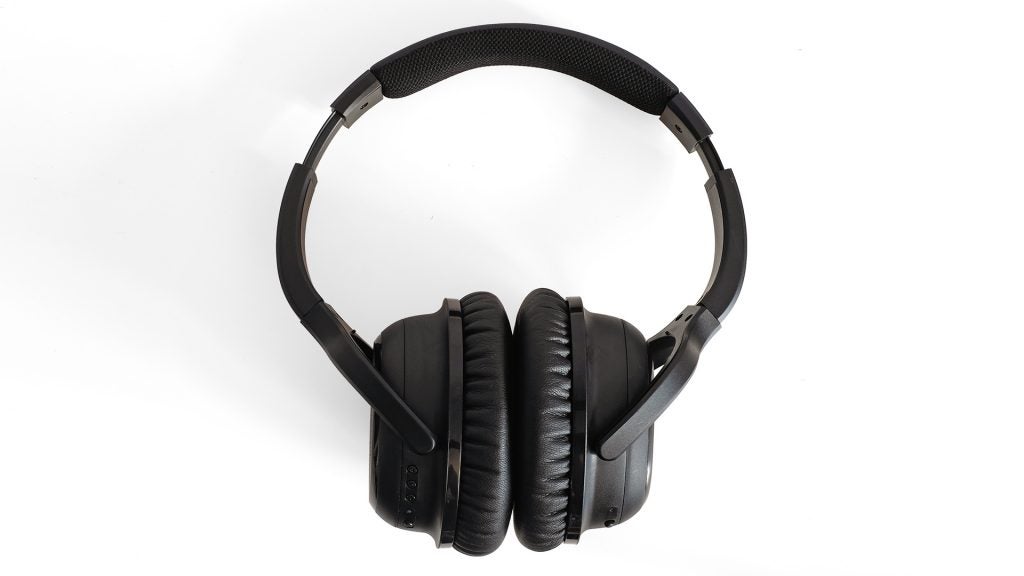 These headphones do offer real sound customisation, but they also try to wean you off the oversized bass common among popular portable headphones. The higher the Audeara setting, the closer the A-01 get to a neutral tonal response, with less mid-bass and bass, and better-promoted mids.

Its effect isn’t the lush and involving experience offered by the Nuraphone, however. As the round is reined-in, the soundstage seems to shrink and the tone becomes less rich.

With the Audeara effect at 100%, there’s a distinct loss of dynamics, since while there’s a progressive loss of “extra” bass, the sub-bass in the untouched audio isn’t great to begin with.

Audeara seems to believe in audio perfection by equalisation, which is effectively what the ear trainer part of this pair uses. However, in this case it’s a little like trying to make a ordinary person a world-class model using plastic surgery. 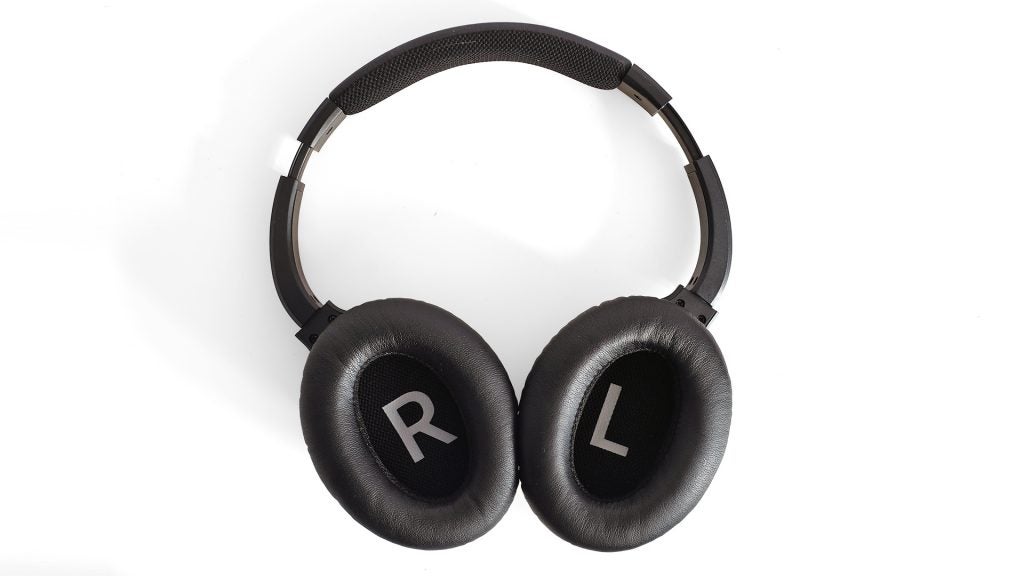 Comparing the Audeara A-01 to other headphones, including the V-Moda Crossfade 2 and Sennheiser Momentum 2.0 Wireless, this approach hasn’t really worked. While parts of the frequency spectrum the profile helps bring out vocals, promoting their detail, the tone and texture isn’t as good as normal wireless headphones at the price.

The mids aren’t particularly smooth or refined. They have definition, but it’s a colder, harder kind of definition that doesn’t offer a particularly natural delivery of vocal lines. Stronger contenders at the price also display better stereo imaging and wider soundstages. The sound doesn’t have the 3-dimensional quality of the best headphones at the price.

It seems we pay quite a lot extra for what is fairly rudimentary equalisation. And if you’re attracted by the Audeara’s claims of compensating for hearing loss, you can also get some of this effect using an Android phone and an EQ app such as Neutralizer. 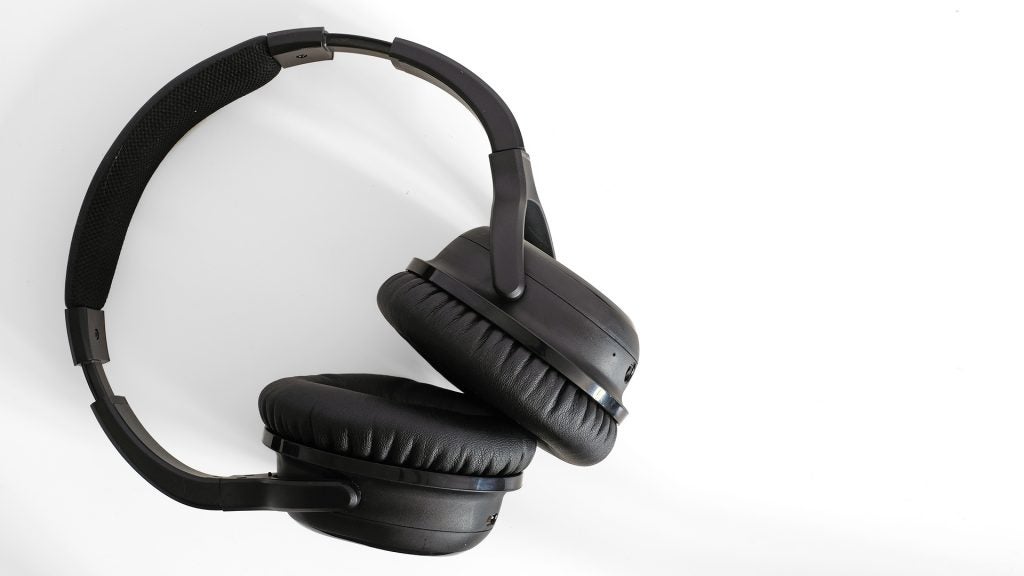 The Audeara A-01 were an obvious candidate for crowd-funding. They attracted AU$ 466,000 of backing in 2017, thanks to their techy-sounding high concept approach. However, they can’t compete with the many excellent portable headphones at the same price.

Active noise cancellation is the most egregious issue. Footfalls cause pops with every step, making these headphones virtually unusable while running or walking.

Profiling your ears is also laborious, and far more subjective than the approach used by the Nuraphone. And even after profiling, these headphones’ tonal quality, separations and dynamics are significantly worse than the best at the price.

The Nuraphone headphones have a weirder fit, but a far more compelling sound. And unless you think you have quite skewed hearing, I’d suggest buying a more ordinary pair such as the Sony WH-1000XM2, Bose QuietComfort 35 II or V-Moda Crossfade 2.

High-concept headphones that are far too expensive for their abilities.