Never put your hand up in error during an auction. Or sneeze, or scratch an itch, or flinch. In fact, it’s probably best if you don’t move in any shape or form.

Any such gesture on your part could see you unwillingly paying out a small fortune for a bespoke and more than likely broken item you don’t really want, or need.

It’s that fear, that thrill of not knowing where in the room the next bid will come from – and whether you’ll get caught up in the rush and find your own hand being raised – that makes an auction the kind of rousing, stirring event it is. 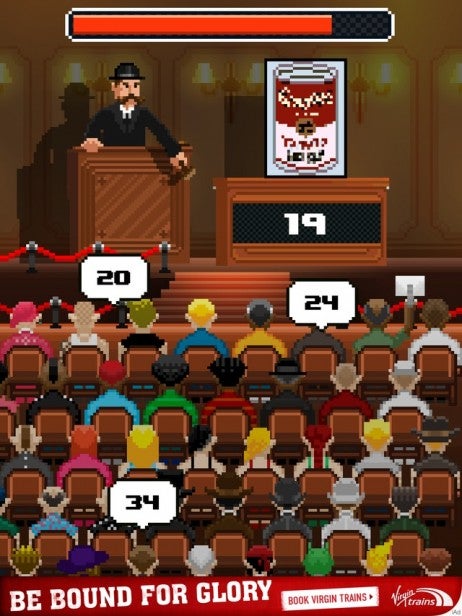 Cherrypick’s Auctioneer may not be able to fully replicate the ins and outs of the bidding process – sadly, you won’t get to take home any of the items that appear on its stand – but it does capture the spirit and the sheer speed behind what goes on in the room.

In reality, this isn’t a game focused on auctioneering at all, but rather a title that has its foundations in reaction times – a game of spotting the highest number on a screen littered with different figures and picking it out as quickly as you can.

Your sole goal is to pick the highest numbers, round after round, until you inevitably make a mistake and tap the wrong figure. It’s an especially addictive set up that perfectly hones in on the same appeal the best mobile games have mastered: The ability to have a gripping bit of gameplay in just a few seconds, and one that could be over just as quickly.

Initially, Auctioneer plays out in a Victorian style setting, with old fashioned items appearing one after another in front of a crowd dressed in their Sunday best. As each item appears, paddles with numbers adorned then start popping up from the crowd – initially two at a time, but the longer you survive, the bigger the batches of numbers get. 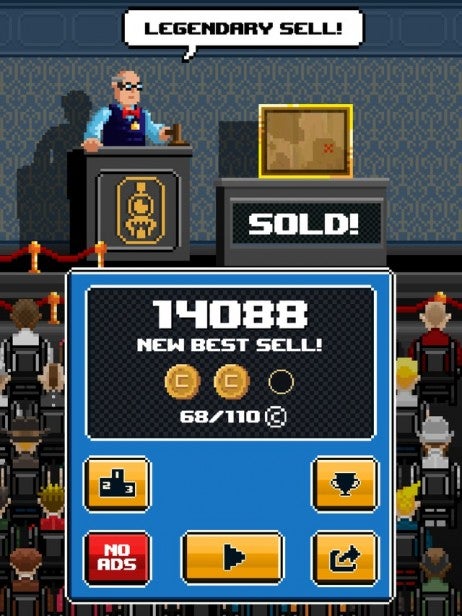 With only five or so seconds to spot the highest number, the chances of picking out the wrong one are high. Auctioneer often floods the screen with similar numbers to distract the eye.

Get it right, and another bunch of paddles will pop up and the clock will reset. Get it wrong, and the auctioneer will thwack down his hammer, taking the last correct number you tapped as the winning bid. This is, effectively, your score, with Auctioneer awarding you up to three stars depending on the quality of your performance.

Additional auctioneers and auction houses are unlocked the more stars you’re awarded – though be warned they don’t actually alter gameplay, but rather the atmosphere it’s played out in.

Each auctioneer has his own audible style, running as a limited but unavoidable commentary throughout, and the items up for grabs also shift along with the auctioneer, bringing a different feel to each auction house, even if the mechanics behind play are essentially identical. 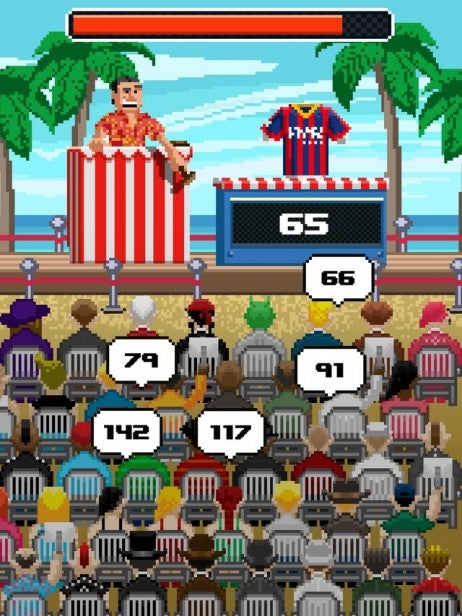 A particular highlight is the reaction of the crowd when you head towards beating your top score. When you get close to beating your personal best you’ll hear gasps of disbelief echoing out of the speakers. It’s a nice touch that adds a bit of extra tension to proceedings – as does the tendency for the paddles to start shaking as time runs dry.

There is, however, a feeling that much more could be made of Auctioneer. As things stand, the game is very much of the ‘mini’ variety, and aside from wanting to beat your own score or any posted on Game Center, Auctioneer comes with a rather short shelf life.

Some additional modes with alternative gameplay elements would the benefit Auctioneer’s long term prospect. Without them, it’s hard to argue this isn’t a slight missed opportunity. Even as it is, however, Auctioneer is a great time waster for those with a spare 30 seconds.

It may not be an accurate recreation of an auction house, but Auctioneer’s focus on reaction times is both compelling and addictive, though the lack of additional modes mean it has little long term appeal.