Looking like the love child of a Starship Troopers arachnid and Kryten from Red Dwarf, the Attacknid is one of the meanest looking toys we’ve seen in a long time. It’s the type of gadget a grown man will fawn over, the sort of toy a father will buy his child just so he can play with it himself. 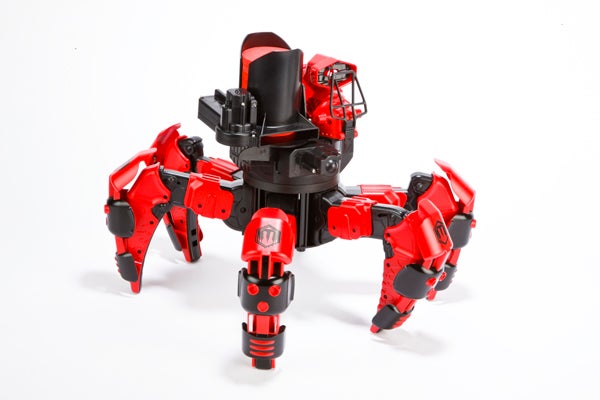 Cool looks aside, however, is the Attacknid worth it or will it be consigned to the bottom of the toy bin within the week? Let’s take a closer look.

In essence the Attacknid is a 6-legged, wirelessly controlled, robot which has the highly entertaining ability of being able to fire foam rubber discs a surprisingly long way (up to 30 feet/10 metres), and at a decent speed. It sounds the part too, with suitably robotic whirring and clunking sounds when it scutters around and fires its ammo. 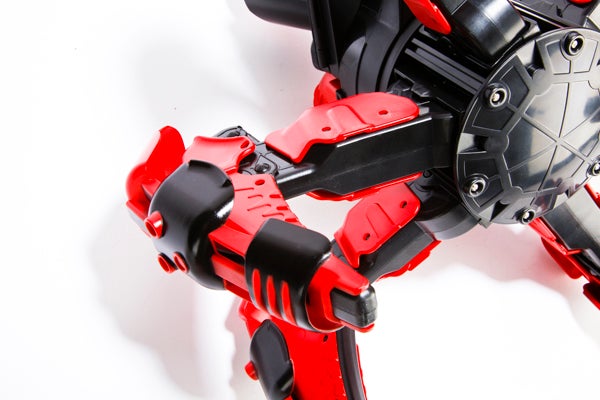 At over 10 inches tall this menacing robot was bigger than we expected, and also quite heavy – 1.5kgs. The weight makes it feel reassuring solid, as do the thick plastic legs and body. Its robustness was seriously tested when we dropped it, several times, from a four foot table onto an uncarpeted floor. No damage whatsoever was sustained, which bodes very well for a children’s toy.

Out of the box, the naked Attacknid is brought to life by attaching a number of plastic clip-on covers which add colour and brightness to the otherwise entirely black toy. This cladding is not just for decoration, however. When facing your Attacknid against a rival, a direct hit with a one of the rubber discs or a clash with another Attcknid will see the spring-loaded leg armour fly off. This controlled carnage adds to the fun of playing with Attacknids and also allows for winners of duels to be crowned based on the number of “legs” removed.

While a single Attacknid is fun to play with, it’s when duelling with at least one other that it comes into its own as a great toy. Two targets, one small and one large can be attached to the battle-brain. Three hits on a target and the losing Attackind deactivates itself, leaving a clear winner. 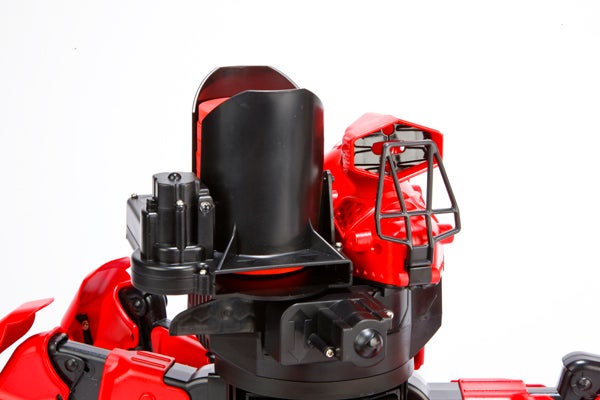 In fact a silly number of Attacknids can battle each other, up to 59,999 can be controlled by a single controller. Unfortunately it’s hard to distinguish them apart as, at the time of review, Attacknids only come in red. However, this is set to change later this year with a range of new colours and weapon types becoming available. In addition the armour cladding is perfectly suited to some modding with stickers or markers to give them some individuality. 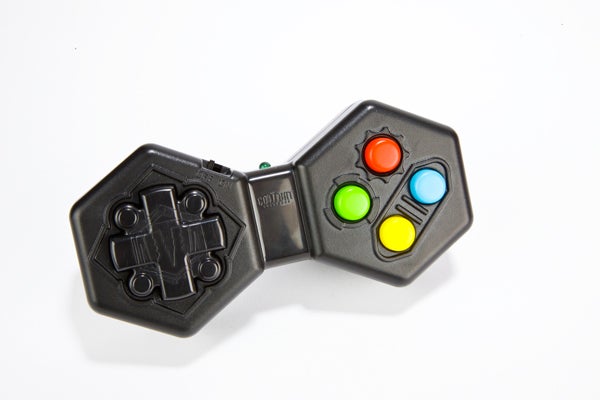 The Attacknid controller is also suitably solid, if a little ugly. Reminiscent of an old-school console gamepad, it allows the user to move the robot and rotate its turret using a d-pad, while the four right hand buttons control the vertical trajectory of fire and let the rubber foam discs fly. There is also a clever button which enables smaller adjustments to the turret, allowing for some precision sharpshooting action.

Controlling the Attacknid takes a little getting used to initially. It moves forwards and backwards depending on the direction the battle-brain is facing, as opposed to being able to “strafe” left and right. Within minutes, though, we found we were able to move it exactly where we wanted it to go and were having fun shooting at our Feature Editor’s head with perfect accuracy. The high ground clearance also means they’re perfectly suited for some “off-road” action in a park or garden, just be prepared to chase after the rubber discs, which are thankfully large and brightly coloured enough to be found easily. 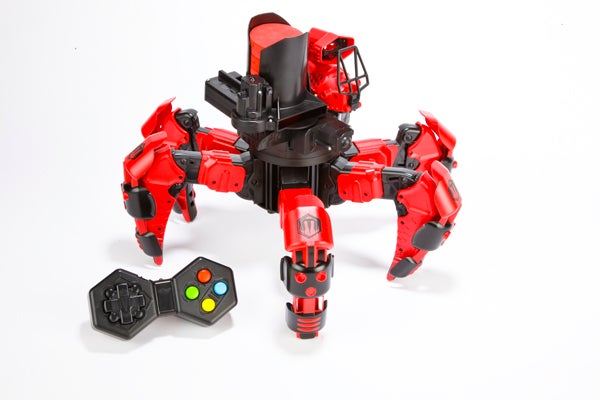 Controller range was good as was battery life. We experienced around 2 hours of play with 4 AA Duracell batteries. This was much better than expected, especially when compared to remote control cars which usually last around 20-30 minutes with the same power. The controller also requires 2 AA batteries, but these should last a fair while. We recommend purchasing a rechargeable battery set to get the best value.

Sure to become the bane of many a household pet, the Attacknid has fast become one of TrustedReviews’ favourite gadgets. It’s solid, well-made and it’s refreshing to play a great game that’s not confined to a screen. Attacknids also have longevity, one of the things most robot toys are not best known for, with owners telling us they still play with them months after purchase.

Do some clever shopping around and you can purchase an Attacknid for under £50, bearing in mind you’ll need two to have a good fight this still comes to around £100 but we think it’s well worth it for both little kids, and for those who are just big kids at heart.