Attack on TItan is a story about the horrors of war, the frailty of mankind and, most importantly, the terrifying nature of the incomprehensible. The human race has been all but wiped out by mysterious giants who devour their victims whole. For the first time the dominant species finds itself outmatched. The wildly successful manga series and an anime that preceded Wings of Freedom was engrossing because homosapiens were the underdog in a losing battle. Every small victory was celebrated, the countless losses mourned.

It’s here that Wings of Freedom is a bizarre inversion of the franchise status quo. Mikasa, the most talented member of mankind’s troops, is celebrated for having killed two dozen titans in the anime. Inside the reaches of WoF, players find themselves slicing and dicing more regularly than a high-street butcher – and, more worryingly, with as much ease.

Although the game captures an essence of aerial combat that’s true to its source material, and still somewhat satisfying in its ad nauseum mechanics, it suffers from repetition on the macro and micro scale. Titan killing quickly becomes a factory floor of identikit button presses, and the game almost exclusively consists, not surprisingly, of killing titans. 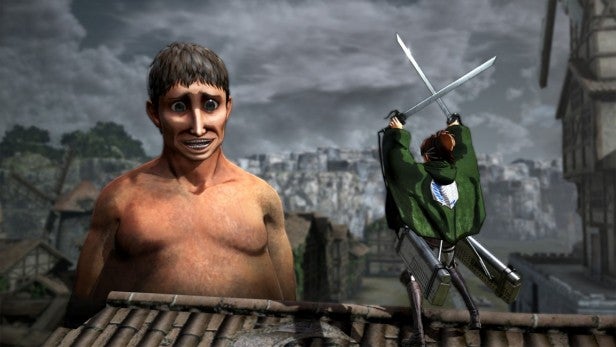 Typing each of these criticisms pains me, since the anime captured my heart back in 2013, and Wings of Freedom is a child of the show rather than the manga. With that in mind, let’s first focus on where the game succeeds, before we descend into my myriad complaints.

The piece of equipment that so captured the minds of viewers in the anime is known as 3D manoeuvre gear. It allows the soldiers of humanity to ascend to the skies and fight monsters that are often 20 times the size of a normal person. Think Spider-Man with 19th-century pressurised cable guns.

WoF manages to replicate this improbable equipment surprisingly well, allowing players to swing across the map semi-elegantly, and effectively removing all borders from the environment. Anyone who watched the anime’s Survey Corps with envy will undoubtedly spend their first hour delightedly “winging” their way from place to place. The system does tend to cause collisions with buildings and other objects with annoying regularity, but when it works, you’re a dual-bladed eagle of the skies.

All of the fee-fi-fo fighting is also conducted using the same gear. Players can attach themselves to one of five spots on a titan’s body: legs, arms, or nape, and enter its orbit, then moving in to deal damage when the appendage is vulnerable. At the same time, players must remain aware of a titan’s attempts to grab and gobble, as well as their cables, which become obstructed by other titans and the environment. You’re much more vulnerable on the ground than in mid-flight.

There’s a rhythmic enjoyment to firing cables from position to position and feeling hyper-mobile. What could’ve resulted in clunky Tarzan fails is, in fact, a series of comprehensible swings. It’s here that Wings of Freedom delivers on the fantasy of being a titan-slayer. You glide, you circle, and then move in for the final blow on the creature’s only true vulnerable spot: the nape. 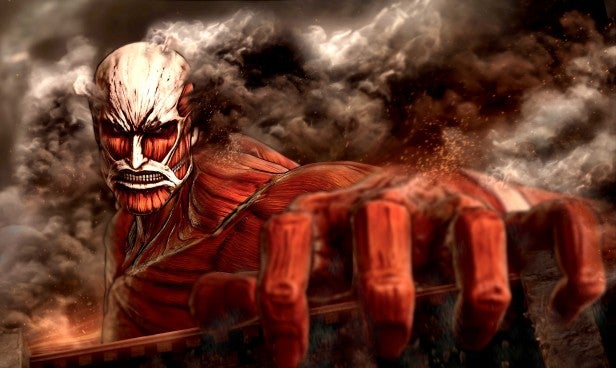 Except that it’s almost never the “final blow”; it’s the first. Wings of Freedom incentivises the severing of limbs before the last strike at the nape by granting a player resources to buy weapons. Unfortunately, the economics of this system are broken, and most of the time it simply makes more sense to cut down the buggers as fast as possible.

I refrained from attacking anything but the nape for hours – with the exception of the odd boss-level titan who has to be slashed in a specific order – and still accrued enough resources to max out my current set of weapons. If the titans were quicker on their feet, then hacking off a leg might be a wise course of action, but they’re lumbering beasts who can, on the whole, be kept at bay with ease.

Inevitably, you’ll want to play efficiently, because you’re going to be killing a lot of the same enemies over and over again. This can only lead to one pattern of attack: grapple on nape, find angle, strike nape, move to next titan. Since most giants can be struck down with a single hit, combat feels more like a one-button slaughterhouse than a test of agility and guile.

Ease and repetition also plague the game’s macro elements. Almost every mission consists of the same pattern: get placed in an open area, slaughter titans near objectives, kill the last, extra-strong titan known as the “final subjugation target”. The game dresses up this pattern as “escort”, “set a trap” or “defend the objective”, but each one plays out in a similar fashion. And the game’s expansive environments are filled with the same old things: idiots who need saving from – you’ve guessed it – titans. 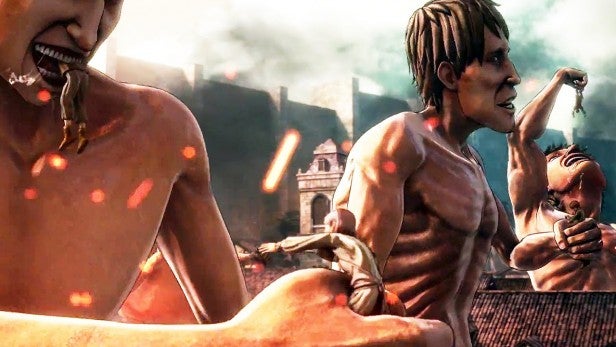 This makes it sound like I’m complaining that a game with “titan” in the title contains too many titans – this isn’t the case. Wings of Freedom was always going to be a giant-fest, but the game fails to make each encounter interesting.

One of the biggest opportunities Wings of Freedom throws down the pan is AoT’s fascinating universe, by slavishly repeating the events of the anime with little to no shame. The world of Attack on Titan is ripe for dramatic plundering. Its history is shrouded in mystery, and much of its lore still lies buried in the mind of Hajime Isayama, the manga’s writer and illustrator.

Where do the Titans come from? What happened in the first expeditions outside the wall? How do the politics between each of the military forces play out? Hundreds of options exist for telling stories outside of the central manga timeline, or even in parallel with the events of the main plot, but Wings of Freedom only occasionally deviates to follow its own path. Nowhere is this clearer than in the cutscenes, which are 100% direct lifts from the anime. Playing is like watching a B-movie version of a film you’ve already seen, and with most of the interesting bits cut out. 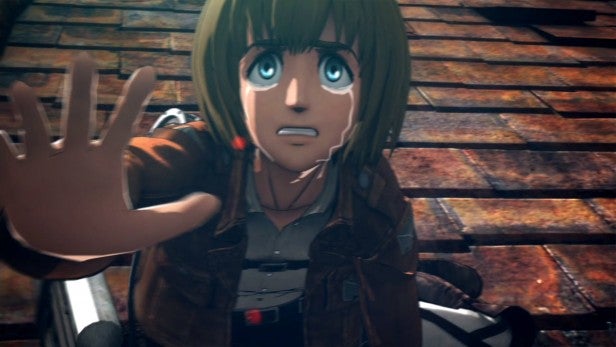 I’d be lying if I said that the feeling of playing Mikasa or Captain Levi wasn’t exhilarating at first. These are two much-loved characters that I desperately wanted in my hands, but I soon came to realise that I wanted something new from Wings of Freedom, rather than a rehash of the old. The game suffers from this problem throughout, desperately trying to stay faithful to the anime’s mechanics while forgetting that variation and progression are the spice of gaming life.

Without a doubt there are hours of fun to be had here, but disentangling my feelings of enchantment with the franchise and the merits of the game itself has been testing. If the WoF didn’t feature characters I already knew, or wasn’t attempting to fulfill a personal fantasy of mine, I’d likely have given up long before the end.

As Mikasa constantly reiterates in the anime, “the world is cruel”, and in Wings of Freedom this statement holds true – but mostly for the wrong reasons.

If you’re looking for a quick distraction that will stick a plaster over the gaping wound of your desire for Attack on Titan season 2, then Wings of Freedom may stem the bleeding. Unfortunately, extended play might cause a few injuries of its own, because for a game about giants and verticality, the game’s long-term experience is woefully flat.

Capable movement mechanics can’t save this game from its endless grind, and lack of variety. Wings of Freedom has its had its feathers clipped, and never manages to get off the ground.