Back in September I took a look at the Sony GPS Location Recorder, a nifty little gadget that clips onto your camera strap and records your position as you take pictures. Not surprisingly Sony isn’t the only company to make such a thing, and today I’ve got a very similar device from Taiwan-based ATP Electronics. Like the Sony gadget, it uses signals from Global Positioning System (GPS) satellites, the same ones that provide the information for your in-car satellite navigation system. The principal is fairly simple; while activated, it records a continuous log of time and position to its 123MB of internal memory, which can then be compared to the time information encoded with the JPEG EXIF data by your camera’s internal clock each time you take a photo. Since the unit know where you were at the moment you took the photo, it can add the location co-ordinates to the picture file. The result can be displayed on a mapping program such as Google Earth, so that each photo is shown in its correct position. 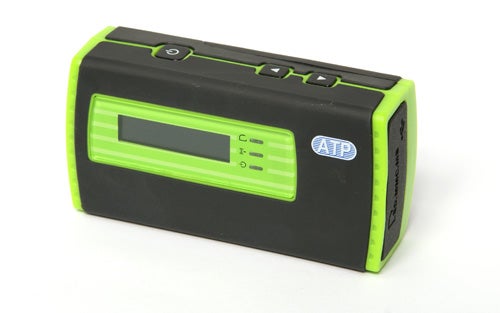 Comparing the ATP Photofinder and the Sony Picture Tracker side-by-side, there are very obvious similarities between the two units, although they do look quite different in style. The Photofinder is the larger and heavier of the two, measuring approximately 83 x 44 x 26mm and weighing about 120g including batteries, a bit less than a small compact camera. Where the Sony is powered by a single AA battery, the Photofinder runs on a pair of smaller AAA cells, which give it a battery duration of around eight hours. The body shell is made of bright green plastic, with most of it covered in a black rubberised material which provides some protection against impacts as well as looking quite nice. Build quality is about average for a mass-produced plastic gadget; there are a few areas that creak if squeezed but it’s not about to fall apart any time soon. 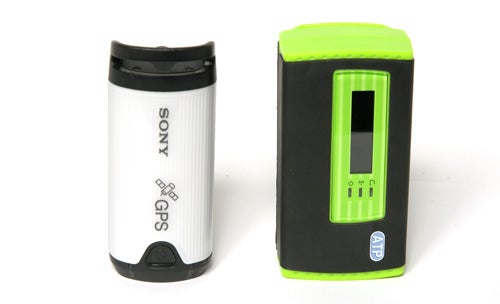 The most obvious differences distinguishing the ATP Photofinder from its Sony rival is the inclusion of a small LCD display on the side, and an SD card slot under a rubber hatch on the bottom. While the Sony Location Recorder has to be plugged into a PC to add its GPS location data to photos already uploaded from a camera, with the ATP unit the memory card from the camera can be plugged into the device’s card slot, which then adds the GPS data to the picture files directly. Also under the same hatch is a mini-USB socket, and any USB memory card reader can be plugged into this, allowing the device to add GPS data to other types of memory card. This is potentially a lot more useful than the Sony system, since it doesn’t rely on access to a PC with the Sony software installed.

The LCD display is also useful, since it can display the time and location data acquired from the satellite signal. The time display is used to synchronise your camera’s internal clock with that of the satellite, essential for accurate positioning, while the location data, displayed as latitude and longitude in degrees, minutes and seconds, can be used for navigation purposes if you know how to read a map. This data is not directly available from the Sony device. The ATP’s display is a bit annoying though; it is of the type that is black with lighter lettering, making it difficult to read in bright light, and it has a stupidly quick sleep function which shuts the display off after just five seconds, presumably to save on battery power. 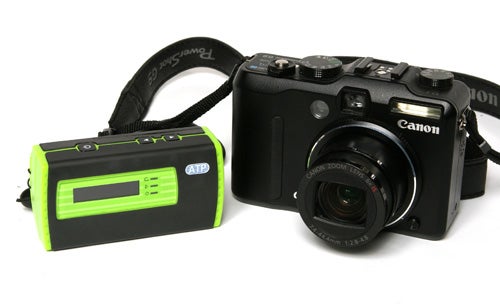 In actual use the ATP Photofinder is very simple to operate. It is activated by pressing and holding the power button for a few seconds, whereupon it attempts to acquire a signal from the GPS satellite system. I found that when first activated, it took around ten minutes to acquire its signal, but was much quicker on subsequent uses, connecting in a couple of minutes. Like most GPS devices it is not capable of picking up a signal inside a building or in a car, but outdoors it worked very well most of the time, although I did notice that it lost its signal when standing on the north side of some tall buildings. I took it out for a walk around my home town, taking a series of photos at local landmarks along my way. When I got home I inserted the camera’s memory card into the unit, and it took about a minute to add the GPS location data to the files. It’s worth noting at this point that the Photofinder only supports JPEG files. 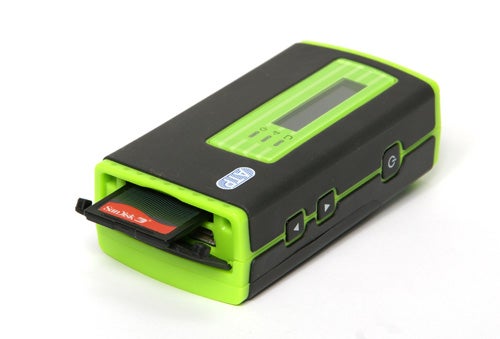 The manufacturer recommends the use of Google’s free photo management program Picasa, which includes an option to display “geotagged” pictures on Google Earth, the global mapping program also available for free download. Like most civilian GPS systems the claimed accuracy is in about ten metres, but I found that while some photos were positioned with pin-point accuracy, many were positioned as much as 100 metres from their actual location. It is possible that some of this inaccuracy can be attributed to errors in the position of satellite imagery in Google Earth, but in some cases the Phototracker was clearly at fault, for example flagging two picture at the same location even though they were taken several hundred metres apart. The reason for this is that if the unit cannot get a signal for part of the time, it attempts to estimate the location based on the time it was taken and the last known position. This is fine if you’re travelling in a straight line, but if you move around a lot it can get confused.

From a practical standpoint, an accuracy of a few hundred metres means that if you were travelling around the world, and just wanted to know which photos were taken in which city, it would be perfectly adequate, but if you want to know where in that city particular photo was taken it is going to be of limited help. The built-in card reader and compatibility with Picasa and Google Earth means that you can update your travel blog from an internet café in Kathmandu as easily as you can from home. For a device costing significantly less than a decent in-car navigation system this level of performance isn’t too bad, but if you’re looking for pin-point accuracy, for example for surveying or wildlife tracking then you will need to spend a lot more money. 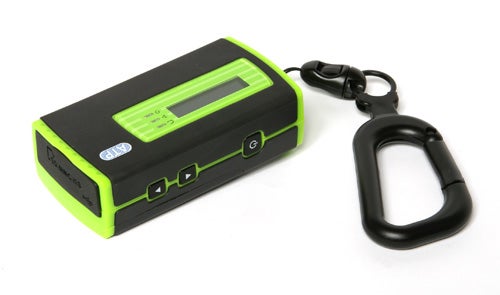 More of a clever gadget than a serious navigational tool, the ATP Photofinder GPS Picture Tracker will be useful for world travellers and anyone into Geotagging, but its slightly hit-or-miss accuracy limits its use for anything more demanding. However it is well made, very easy to use, and the inclusion of a card reader and compatibility with widely-used free software makes it extremely convenient.

Geotagging is the name for the process of attaching geographical location data to photographs, and then displaying them using a global mapping program. Two free programs available from Google, Picasa and Google Earth support geotagging, and the ATP Photofinder is compatible with these programs. 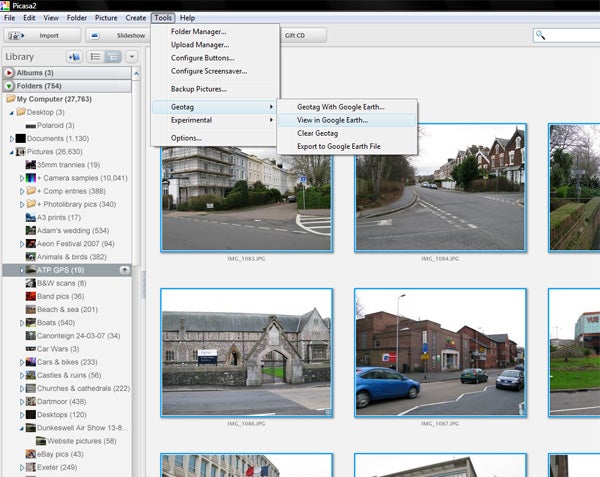 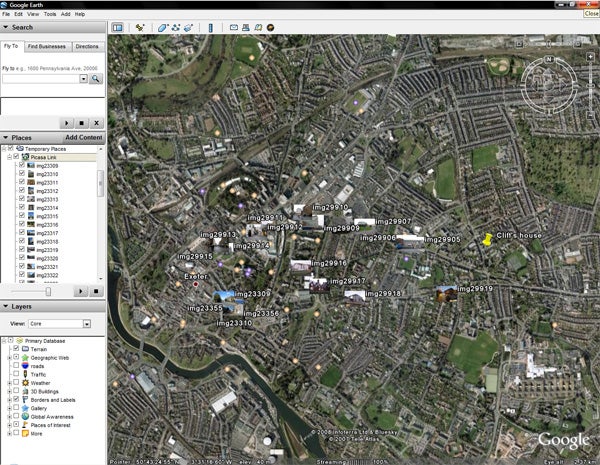 The GPS data added to the image files by the Photofinder device allows images to be displayed on Google Earth’s satellite image, keyed to the position in which they were taken. 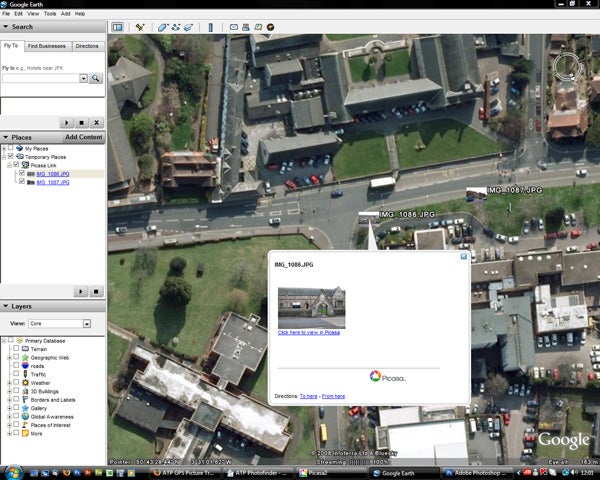 In some cases the accuracy is extremely good, but other shots were inaccurately located, sometimes by over 100m.