Being the cynic I am, on seeing Atomic Floyd’s packaging boast that its HiDefDrum AcousticSteel earphones are “the pinnacle of world class acoustics” I couldn’t help but feel a little driven to disagree. Such preconceptions may not be fair but, when innumerable emails a day (ones that aren’t offering to sell me illicit hallucinogens or resize various body parts) claim whatever product they’re touting to be the bees knees, cat’s pyjamas and dogs… proverbials, a little scepticism is par for the course.


With the Atomic Floyd earphones, though, I was for once pleasantly surprised to have my preconceptions proved a misconception. Because, as it happens, the HiDefDrums aren’t rubbish at all – far from it in fact. 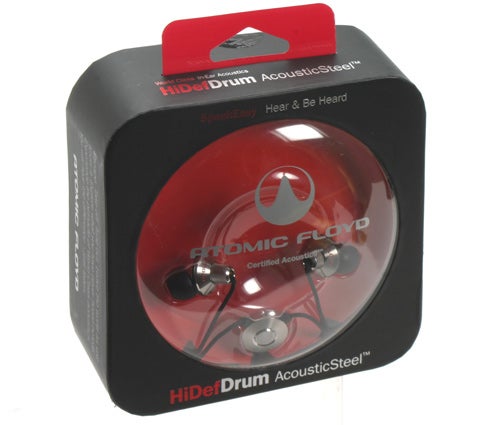 Notably the HiDefDrums are not canal-phones, despite the fact that in-ear models seems to be the design of choice these days. Instead the ‘phones twin driver arrangement consists of an inner nib which points into the canal handling mid and high end sounds and an outer bass port which, as the name suggests, deals with lower frequency audio.


Speaking of the HiDefDrums’ construction, it has to be said that they really stand out given their £85 price point – although that’s a blessing and a curse. The buds are built from some very sturdy stainless steel – or rather AcousticSteel which is presumably somehow better – there’s a real feeling of quality that puts even my Shure SE420s to shame. 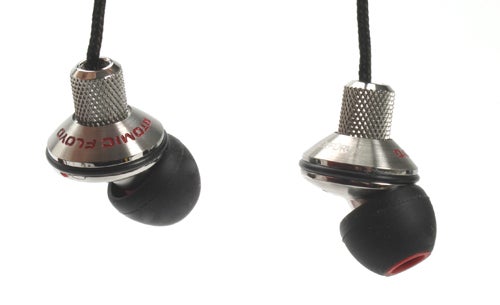 That construction extends to the 3.5mm jack and the in-line remote, which has both a button and a microphone built in, allowing it to not only control iPod touch or iPhone music playback, but also make and receive calls on the latter.


Sadly this ruggedness to the HiDefDrums’ construction isn’t entirely a good thing. After becoming used to the Klipsch Image X5 canal-phones over the last couple of months the bulk and weight of the HiDefDrums makes a stark contrast.


Having so much metal hanging on an earlobe definitely takes some getting used to. Once adjusted to though, the fit is secure and there’s no discomfort.

A further criticism of the Atomic Floyd HiDefDrum AcousticSteel earphones design is that a profound amount of sound leaks out to disturb anyone in the vicinity. Wandering around the office listening to Fall Out Boy’s Pavlove at what I’ll admit was a slightly extreme volume level – testing for any distortion as a result – I was surprised when I removed the ‘phones to hear a couple of colleagues barking at me to “turn the bloody noise down.”


The problem is unavoidable as the bass driver is just pointing in the rough direction of the ear canal, rather than being embedded in it as per a canal-phone design. It’s a trade-off that could be worth it for some, though, because the benefit it brings is bass response that’s rarely found in an £85 set of earphones. 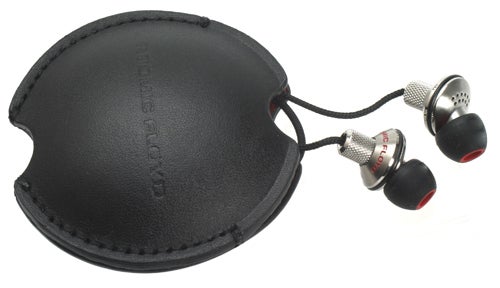 As well as providing a wide-spanning soundstage, the HiDefDrums also offer impressive clarity. That deep bass comes with plentiful detail as evidenced by a play through pf Mötley Crüe’s sublime Saints of Los Angeles (possibly my favourite album of 2008) with Vince Neil’s vocals ringing out unmistakably over Nick Mars’ and Nikki Sixx’s screaming guitars and Tommy Lee’s pounding drums.


In the same kind of league when it comes to sound quality we have the likes of the Etymotic Research hf2 headset which oddly enough also sports an in-line microphone or the Shure SE102 microphone-less earphones.


Not having the hf2s handy, I’m stuck with just the SE102s to compare to and my personal taste inclines towards the Shures. I’d hazard as to say the Atomic Floyds hold their own in terms of audio fidelity but produce a ‘colder’ sound than that produced by the Shures. 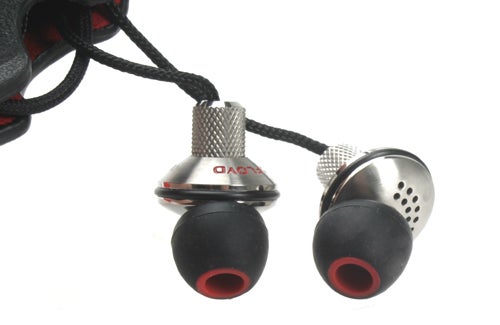 Furthermore the single-driver SE102s sound that bit more cohesive than the HiDefDrums with the majority of my preferred musical styles, suggesting the crossover in the latter earphones is tailored more towards pop or drum and bass fans than rock enthusiasts. A second play of Saints of Los Angeles (the single, not the album) was tangibly more enjoyable on the Shures to my ears, but Katy Perry’s frustratingly catchy Hot N Cold swung me in favour of the Atomic Floyds.


Overall then, my personal preference is based not on which earphones sounds better – that’s entirely down to the musical genre of preference – but instead earphone type predilection. In my case, that’s canal-phones every time.


If you’re comfortable with a more traditional earbud rather than canal fitting earphone design and enjoy grooving along primarily to pop and dance fodder then the Atomic Floyd HiDefDrum AcousticSteel earphones should be music to your ears.