ATI’s All-in-Wonder range is something of a legend in the PC graphics market. Since the introduction of the first All-in-Wonder back in late 1996 (based on the 3D Rage II!) it has become famed for offering an all-you-can-eat mix of high powered graphics and multimedia in one pot.


On top of the latest ATI graphics chip, the All-in-Wonder always adds a TV Tuner and a plethora of inputs and outputs for connecting up and capturing from a variety of sources. It was really the forerunner to what is now becoming a mainstream practice – combining the power of a computer with TV.


In the past it has always been some time after releasing its latest graphics chipset before the GPU would also appear. However, this time ATI has been quick out of the traps, releasing the All-in-Wonder X1900 at virtually the same time as the dedicated graphics card. 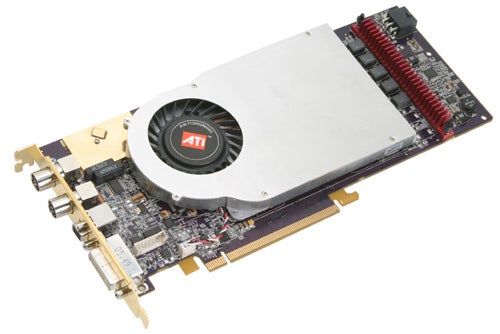 However, as ever the chip on the card is not quite as powerful as the standalone version. The clock speeds on the XTX hit 650MHz core and 1,550MHz and the XT 625/1,450MHz. The All-in-Wonder has ‘only’ 500/960MHz. Additionally, instead of 512MB of memory there’s only 256MB on board. This does make the card slightly more mortal at super high resolutions but the 48 pixel shader processors and eight vertex shaders are unchanged, so for 3D graphics performance this is still a beast of a card.


These lower clock speeds are necessary to reduce heat output to enable the extra circuitry on the card to function reliably and also to save cost on what it already an expensive product. That said it looks as the price should be around the £300 mark, which would make it significantly more affordable that the XTX or the XT. Availability in Europe is said to be mid February.


The advantage of the lower clocks though is that the card can be a slender single-slot solution. However, the card is quite long at 247mm so get out your tape measure before planning on fitting it into a small form factor PC. The fan is also relatively quiet. For testing I swapped out two GeForce 7800 GTs for the All-in-Wonder and purely in terms of noise levels the difference was palpable.

The card has a high quality feel to it, feeling very solid with a gold coloured rear bracket and a small gold coloured DVB-T tuner present. At the rear, the AIW has to make do with a single dual-link DVI port, which means that you’ll only be able to connect a single 30in Dell screen to the card. Oh well. An adaptor is also provided that turns the DVI socket into Component output, which with the rise in popularity of LCD and Plasma TVs is becoming more relevant in Europe.


The second DVI port is omitted in order to make way for the TV and FM radio connectors. Next to this is a small connector for attaching a cable on which hangs a SCART and VGA outputs. A third cable on this connects to a dongle that contains the composite and S-Video inputs along with two RCA audio inputs.


The presence of a SCART connector is good news for those in Europe who wish to output to a CRT TV, while the inputs mean that you can connect analogue sources, such as older camcorders or set-top boxes. 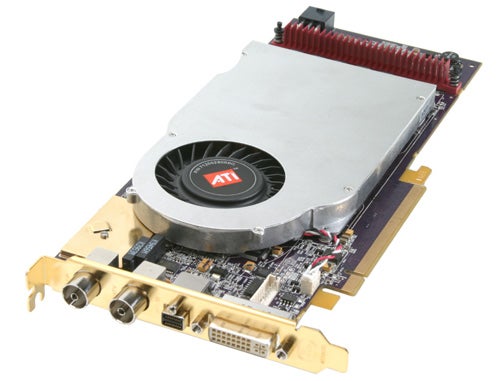 Despite ATI’s stand-alone Theater 550 chip having been available for some time the All-in-Wonder is still powered by the older Theater 200. It’s frustrating to think that ATI’s top-of-the-line multimedia powerhouse doesn’t feature its best in picture quality. At least the tuner is digital, but when testing there was a noticeable amount of noise is the picture on some channels. Mostly this is down to the low bit-rates that Freeview uses but I would imagine that the 550 would do a better job at cleaning it up.


One thing that I’ve always noticed about ATI cards is that its drivers take ages to install, and it’s even worse with the AIW cards, which have loads of extra functionality. Once installed, and you’ve hooked up the card to a TV point, it took about ten minutes to scan through all the channels but not before a BSOD. I’d recommend installing on a fresh Windows installation if at all possible.

A shortcut bar is installed by default on your desktop giving you links to the various players for TV, DVD, Radio, or files on your PC. The library function enables you to quickly find content that you’ve recorded and can be sorted by time or title.


Dissapointingly, ATI’s venerable MultiMedia Center (MMC) software hasn’t had a cosmetic update since the first time I ever used it, which was back in 1998. It can however, be controlled via the supplied remote control. The benefit of this device over the Windows Media Center remote is that it integrates a pad for moving the mouse pointer, so you can use it in Windows. It’s also RF whereas the MCE one is infra-red line-of-sight only. The card is compatible with MCE 2005, and if you’re serious about using this as media system then MCE is undoubtedly a slicker system than ATI’s now aging interface.


The first time I fired up MMC, it brought up a message saying that DMA wasn’t enabled on my hard drive and that it might degrade performance. However, I didn’t experience any problems and I was able to watch TV and have content recorded straight the hard disk so that I could rewind at any time, like a Sky + box. 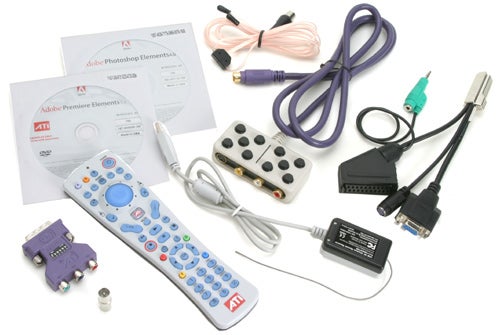 As you switch channels the player shows you the resolution of the content, which is 576i over Freeview. As I mentioned earlier, quality was reasonable, but a high resolution monitor will show up noise in the picture.


In terms of 3D performance the graphs compare how the All-in-Wonder fares next to a full on XTX, which we tested on exactly the same system – an AMD Athlon FX-60 with 2GB or RAM. The difference is quite significant. Having half the amount of memory is notable at very high resolution, making 2,048 x 1,536 impractical or in the case of F.E.A.R. – impossible. Even at 1,600 x 1,200 with 4x FSAA and 8x AF, the AIW really struggles in Far Cry, delivering nearly half the average frame-rate.


Looking at the scores overall it’s clear that the sweet spot for this card is 1,280 x 1,024 , which would still make it an ideal partner for a 20in widescreen monitor at 1,680 x 1,050 or an HDTV with a 1,280 x 768 resolution. If you’re thinking of the latter though, note that there’s no HDCP support on this card so watching Blu-ray or HD-DVDs through it won’t be possible.

In addition to the testing I also played for a while on the card in Quake 4 and Need for Speed: Most Wanted to get a more subjective sense of how it performed. 1,280 x 1,024 was indeed the resolution sweet spot. Image quality was excellent and appeared to me slightly sharper and brighter than the NVIDIA cards that were formerly in the system.


If you were wondering if the All-in-Wonder X1900 could be used in CrossFire configuration in order to improve performance then you’ll be disappointed to learn that it’s not possible as both the AIW and the CrossFire master card both want to be the primary video card, and the squabbling means that they just won’t talk to each other.


The other path to take is overclocking. We found that we could boost the core quite considerably from 500MHz up to 575MHz but the memory would barely budge before the system crashed. This was disappointing as bigger overclocking gains are obtained from faster memory. As such, we only saw increases of a few frames per second despite the huge hike in core clock speed. That said, Half Life 2 at 1,600 x 1,200 did go from 61.0 to 67.3fps. 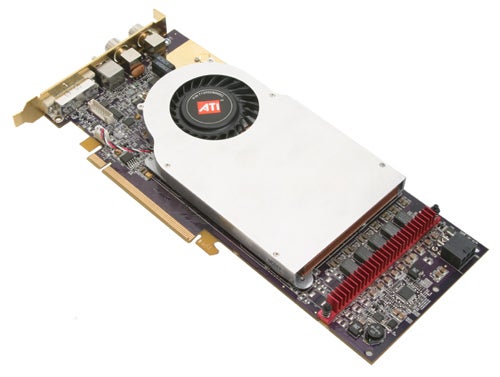 The All-in-Wonder then is, as ever an impressive beast, but I must admit that I increasingly struggle to see the point of it. For a media centre system a dual TV tuner would be far more preferable and DVB cards are now widely available. Many also offer analogue inputs, which used to be a major selling point of the All-in-Wonder. ATI does include both Adobe Premier Elements 2.0 and Adobe Photoshop Elements 4.0, which is a great software bundle, but that doesn’t change the fact the these days video content will be imported via DV.


MMC is also rather unfriendly and I’d rather use Windows Media Center. Also, though there is an attraction to having TV and powerful gaming in one it could be hamstrung by the sheer length of the card. And if you want a dedicated media system, wouldn’t a fan-less and therefore totally silent card be preferable.


This all means that the All-in-Wonder is something of an oddity. Perhaps its biggest selling point is the fact that it’s good value and likely to be the cheapest way of entering the world of X1900 graphics. But I’d still rather have a regular X1900 XT and a couple of DVB cards.


This card is everything you’d expect to see from an All-in-Wonder but in the age of DV camcorders and Microsoft’s Windows Media Center it’s hard to see it as anything else but a niche product.