What is the Asus ZenWatch 2?

The ZenWatch 2 is Asus’ second attempt at putting Android Wear on your wrist. 2014’s ZenWatch was an attractive entry in the expanding smartwatch market, with its refined design and low price. But it was let down by the lack of a physical button and a use of a clunky, early version of Android Wear.

The Zenwatch 2 attempts to fix these and other issues, delivering a well-built, sleek-looking smartwatch with a refined version of Android Wear and a choice of two sizes. They’ve also managed to keep the price low at £149.99 for the larger model (the smaller one isn’t currently available in the UK, although Asus told TrustedReviews they are looking into a possible launch depending on demand) and are offering buyers a choice of three different design styles, and 18 different straps.

However, with the lack of a heart rate monitor, paired-down iPhone functionality, and the return of the dreaded super-bezel, does the ZenWatch 2 do enough to put Asus at the forefront of a still burgeoning smartwatch market? 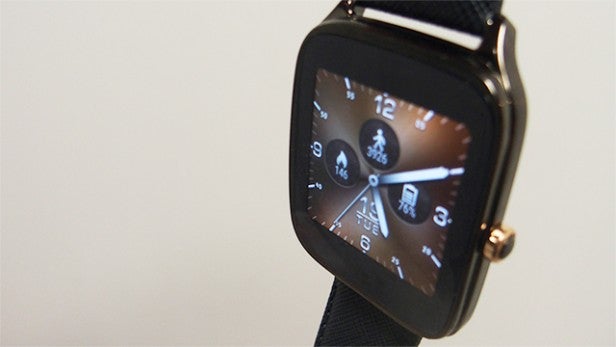 Asus has kept the rounded square design from the first ZenWatch. The 2014 model measured 51mm x 39.9mm, whereas the largest of the two new designs shaves a few millimetres off the length at 49.6mm x 40.7mm. In terms of thickness, the ZenWatch 2 actually adds to the first model’s 9.4mm, with the large version coming in at 10.9mm. The smaller of the new models reduces length and width further at 45.2mm x 37.2mm, but the tradeoff is that you get an even thicker 11.8mm body.

My review model was the larger of the two new ZenWatches which weighs 70g – still 5g less than its predecessor. In comparison, the smaller version, which seems to be Asus’ attempt at targeting women, weighs only 60g.

I can tell you that the ZenWatch 2’s lightweight, sleek design makes it very comfortable to wear. I didn’t notice the extra weight after a few hours and never had any issues with it catching on clothing or knocking against things. In other words, it’s refined build quality is about more than aesthetics, it also makes the watch practical to wear. 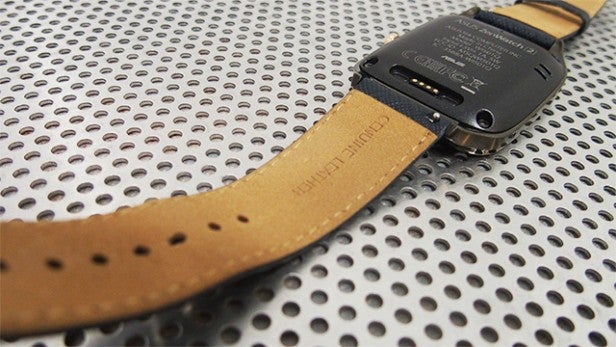 But, as Asus proved with the first ZenWatch and its range of Zenbooks, aesthetics certainly matter. The new device looks distinctly Apple Watch-esque, especially with the added crown which acts as a multi-functional button. But Asus has gone further than simply mimicking the design of Apple’s product.

The ZenWatch 2 is mostly stainless steel and comes in three different finishes: silver, gun metal, and a striking rose gold. The curved Gorilla Glass 3 looks great and the whole thing manages to feel elegant and sturdy at the same time. My review model was the gun metal version which, with its rose gold crown/button, looks genuinely stylish.

The strap options add a further element of choice and are all made from different materials and feature a variety of clasp types. You can also choose between 18mm and 22mm strap size options. So if you have slender wrists and don’t feel like highlighting just how small they are, you can strap on the smaller model.

Asus really has done well in terms of design, providing a premium-feeling product at an affordable price. The ZenWatch 2 isn’t quite as striking as the LG Watch Urbane or the Huawei Watch, but it’s also nowhere near as expensive. 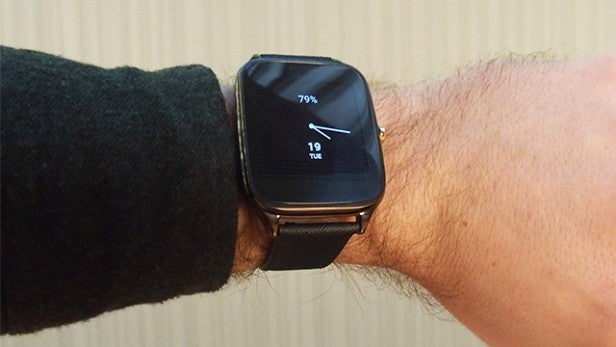 One unwelcome return from the first gen ZenWatch however, is the bezel around the screen. Put simply, it’s huge. Despite a small reduction in the length of the watch face, the screen is still surrounded by a hefty black border. What’s interesting is that, while large bezels on laptops and phones really do make their respective devices seem dated, for me, the effect is lessened when it comes to smartwatches, so it’s not a complete deal breaker.

It would be nice to have a smaller bezel, and compared to the Moto 360 2 with its unadorned digital porthole, the black screen surround certainly looks a tad behind the times. But Asus has done such a nice job of the overall design that even a large screen border can’t detract from the wholly modern build. It also means that the screen can remain smaller to preserve battery life. 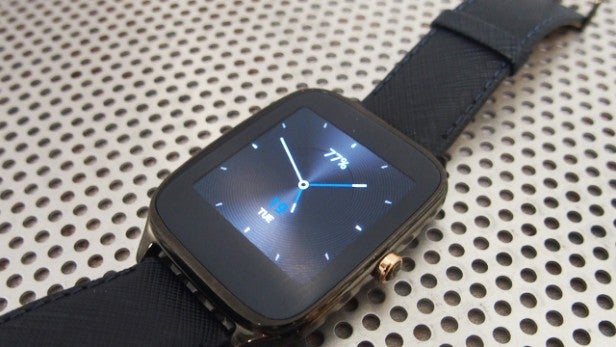 When it comes to the screen, Asus has provided all you’ll ever really need from a smartwatch display. The 1.63-inch, 320 x 320, AMOLED screen features a 278ppi density, which is more than adequate for the average user. If you try hard enough you can just about make out the individual pixels, but overall, images, icons, and text appear crisp and vivid. Once again, Asus sent me the larger of the ZenWatch 2 models, and although I haven’t used the smaller one, I can imagine that there’s no danger of pixelation on the 1.45-inch 280 x 280 resolution screen. Usability might suffer however, as I found the 1.63-inch screen is just about large enough to use all of the swipe actions comfortably.

The Zenwatch 2 uses the same AMOLED screen technology as the first ZenWatch, which helps further mitigate the bezel issue. An LCD screen wouldn’t offer as deep black reproduction, which would make the distinction between screen and bezel more noticeable. You can still make out the border between screen and bezel, but it’s much more subtle thanks to the AMOLED tech’s ability to produce deeper blacks. 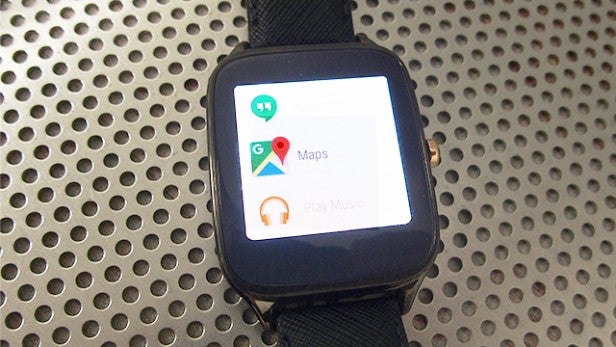 Whereas the first ZenWatch display left much to be desired when it came to readability in bright sunlight, I had no problems reading the screen on the new model during the day. It should be said that I was using the ZenWatch 2 in a distinctly drab London, but even in the rare moments when the sun would appear, I had no problems reading the screen and even managed to use the Google Maps app to navigate across the city without any problems.