What is the Asus ZenWatch?

The Asus ZenWatch is the company’s first foray into smartwatches, and is another to use Google’s Android Wear platform.

The ZenWatch stakes a strong claim for being the most stylish smartwatch currently available, and if you’re prepared to live with the quirks of Android Wear, it’s definitely one of the better options out there. But boy does it still have issues. 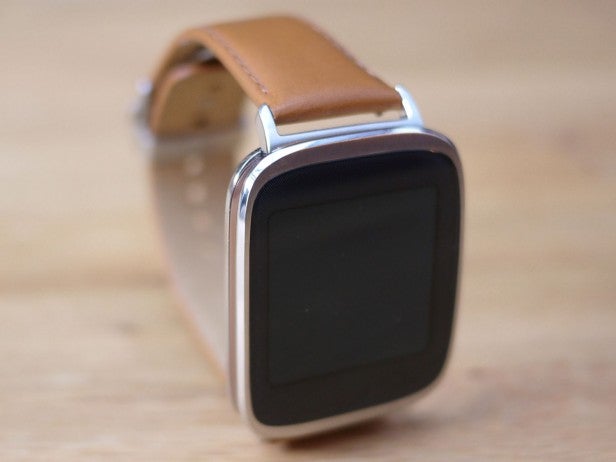 Asus was right to sit on the fence a while before releasing its first smartwatch, as that extra thinking time combined with the company’s keen eye for design – the Asus Zenbooks, anyone – has resulted in a very tasty-looking wrist accessory.

OK, so the face is still quite large and if brown leather isn’t your thing then it probably won’t appeal, but otherwise there’s little not to like. You can always swap the strap for an aftermarket one.

That face is polished stainless steel up front and a lovely matte-finish steel on the back, with metal strap lugs too. Bisecting the front and back are a couple of copper-coloured strips. Combined with the tan-leather strap it’s a classy combination. 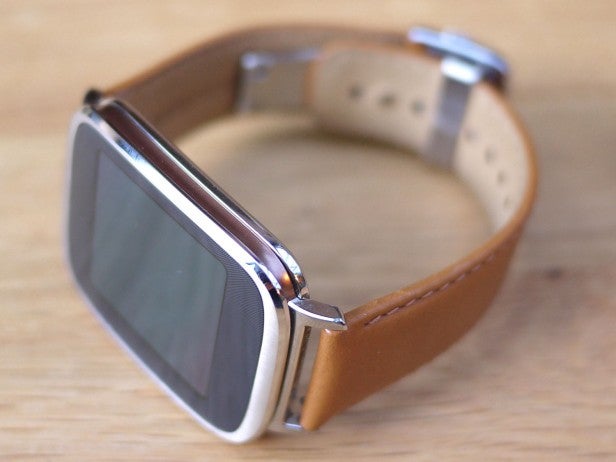 Measuring 51 x 40 x 9.7mm the watch face is among the most compact out there, with its slimness being particularly impressive. In comparison, another of our favourite Android Wear watches, the LG Watch R, is 11.1mm thick. That may not sound like much, but on a device you wear all day it does make a difference.

As to the strap, in theory it’s a great design. The use of real leather, with a polished finish on the outside and soft finish on the inside, is indeed very nice on the skin. The clasp mechanism is also classy. Not only does it make putting the watch on and removing it really quick and easy, but it also allows for simple adjustment and it prevents the watch falling off completely if it somehow works loose.

It’s a tried-and-tested mechanism that’s common in high-end watches, but we found it caused some problems in this case. The culprit is the combination of the slightly stiff leather strap, large watch case and the folding section of the clasp, which means it digs in slightly in places and forced the face to twist away, making the watch more difficult to read. It’s by no means outright unwearable, but just irritating enough. 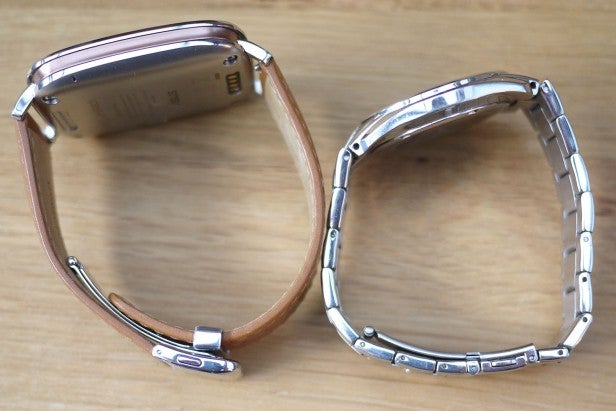 Unlike some Android Wear devices, there are no buttons here, with Asus instead relying on the touch interface. Well, there is a button but it’s on the back of the device where it’s essentially unreachable. This can be used to turn the display on and off, opening up the settings and few other things. We really wish it was in a more prominent position, because it makes Android Wear so much more usable. Alas.

Asus has achieved something rather special with the Zen Watch’s screen, in that it’s managed to build a smart-looking watch despite it being square. Most of our other favourite Android Wear watches use round displays.

The display itself is of the OLED variety with a resolution of 320 x 320 pixels, which puts it on par with most of the Android Wear competition. Sadly it’s not so sharp that you can’t see the pixels, like on today’s smartphones, but the processing power to drive higher-resolution displays would impact battery life, so it’s a trade-off, and it’s still pretty good. 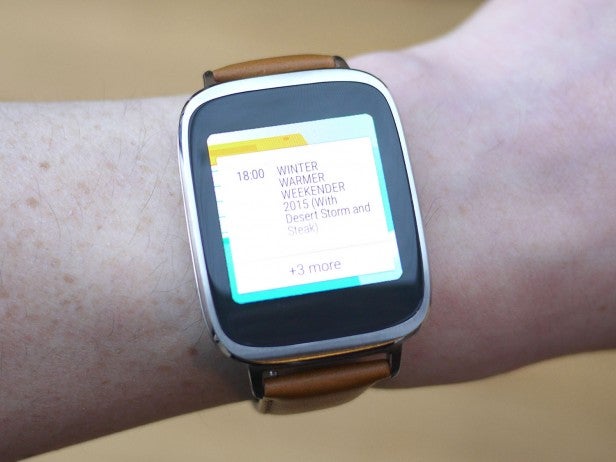 What’s most likeable about the ZenWatch’s display is that, unlike on LCDs, there’s no backlight, so the image just appears out of inky blackness. You can still make out the border between the screen and the bezel, but it’s pretty subtle.

Unfortunately, this very property also makes the display next to useless in bright sunlight. If you crank the brightness up to maximum it’s just about visible, but then this is too bright for most other occasions and it drains battery. Android Wear does have a Sunlight mode, but it’s buried in a menu. Smartwatches really need both brightness sensors and some way of detecting when the watch has been raised, so it automatically turns the face on. Currently you have to choose between always on or tapping the screen every time you want to check the time.