Hands-on with the Asus Zenpad 7.0

There’s a lot we should be thankful to Asus for when it comes to 7-inch Android tablets. After all, the Taiwanese company built both generations of the Nexus 7 – which remain two of the best Android tablets ever built.

Next on the agenda is the Asus ZenPad 7.0 (Z370CG), not to be confused with the cheaper Asus ZenPad C 7.0. The 7.0-inch Android tablet was announced at Computex earlier this year but this is my first look at it. 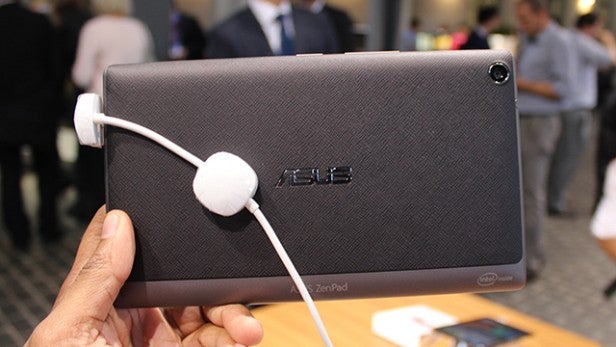 The specs sheet reads like the first generation Nexus 7 albeit with some additions. Like the 64-bit Intel processor, micro SD card support, some potentially interesting HDR display technology and an array of optional covers that Asus clearly hopes will prove a distraction from what is essentially a mid-range Android tablet.

From the front, it’s your bog standard Android tablet. The black screen bezel above and below the screen are pretty thick and there’s just the front-facing camera sensor and microphone up top breaking up an otherwise drab-looking slate.

Flip it over and thankfully Asus has made some attempt to make the ZenPad feel a little more luxurious. The removable back features a textured leather-effect finish that helps you get a satisfying grip on the 272g, 8.7mm thick tablet. It’s a tablet built to be used in portrait mode and it’s sufficiently comfortable to use it without worrying it might become a strain for longer browsing sessions. 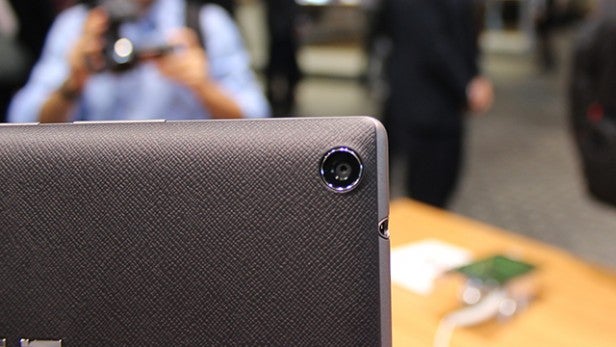 That removable back can be replaced with a clutch-style case, that basically attempts to look like a clutch bag, a power case that can also add battery life when its not in use and an optional 5.1 Surround Sound audio cover. The audio cover is interesting considering the speaker setup alone on the ZenPad 7.0 doesn’t make a good first impression. Granted, that’s always difficult to judge in a busy room, but they’re clearly a little on the weedy side.

Asus talked up the 1280 x 800 IPS screen but being honest, it’s not groundbreaking, at least from a resolution perspective. It does include the company’s Tru2Life technology, which claims to bring the same high-end TV HDR technology to a tablet.

The benefits include improved sharpness, intelligent contrast and better outdoor visibility. There’s a little demonstration pre-loaded onto the tablet to emphasis the screen enhancements but it was difficult to notice a dramatic difference. I’d definitely need to spend more time to get a clear idea if the Tru2Life tech makes a difference.

In the power department, there’s a 64-bit Intel Atom processor with the option of 1GB or 2GB of RAM and a MaLi-450 MP4 GPU. It’s by no means a powerhouse in tablet terms, but it should be enough for most and a swipe through home screens and launching apps shows things generally are running smooth. All of the connectivity bases are covered here as well, with micro SIM slot to offer 3G connectivity and Miracast support to send your screen to compatible TV. 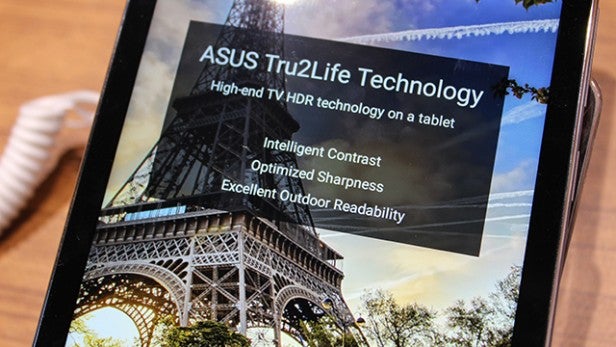 The ZenPad runs on Android 5.0 Lollipop, but be warned you’ll have to deal with some of Asus’ customization. Testing the tablet I found Asus hasn’t substantially tinkered with Android, but there does appear to be a bit of bloatware pre-loaded.

For those intent on taking it out in public to take pictures, there’s an 8-megapixel main camera around the back and the option of 5-megapixel or 0.3-megapixel front-facing camera. The options mean the ZenPad cameras are on-paper reasonable by tablet standards, but nowhere near as good as most smartphones.

Rounding things off is a 3,450mAh battery that Asus claims should get you up to eight hours battery life. That’s enough for a day’s play and probably not a lot more.

Priced at €199, which is about £150, the ZenPad 7.0 ticks most of the mid-range tablet boxes. It’s got a solid screen, a strong build quality and plenty of connectivity. Is that enough? That’s debatable.

I’m not entirely convinced by the HDR display technology and the speaker setup either, but at least the optional cover does help disguise the largely lacklustre design. But, when the affordable end of the tablet market is already a congested place, I’m not sure a selection of optional cases is really the key to standing out from the crowd.