Convertible tablets have been all the rage since the Pixel C and iPad Pro arrived last year, and for good reason. Offering travel-friendly designs, coupled with developed app ecosystems, they’re great for both mobile productivity and entertainment.

The only downside is their fairly hefty £300-plus starting price. Which is why at first glance the Asus ZenPad 10 is a fairly enticing offer. With prices starting at a meagre £200 for both the tablet and keyboard dock, the ZenPad – on paper at least – offers seriously good value for money.

In real-world use, the ZenPad delivers on this promise and is a great netbook replacement. But ongoing issues with it’s software and CPU mean that, like the ZenPad S 8.0 Z580CA before it, the ZenPad 10 falls slightly short of hybrid greatness.

Asus’ ZenPad range of tablets has a tendency to put functionality and affordability ahead of glitz when it comes to design. This trend continues with the ZenPad 10. It’s a fairly unassuming slate, split into tablet and keyboard sections.

The device isn’t going to win any design awards. The tablet section is a purely plastic affair that feels noticeably less high-end than competing devices, such as the Nvidia Shield K1.

Once I’d physically connected the two parts and paired the keyboard with the tablet over Bluetooth, my experience typing on the ZenPad 10 was mixed.

The keys have reasonable travel and feel solid compared to other tablet keyboard docks I’ve tested. The dock is also weighty enough to ensure the tablet isn’t too top-heavy – as is the case with the Pixel C – and can be comfortably used as a notebook on your lap.

However, the entire dock flexes even with moderately heavy typing, making it all too easy to hit the wrong key, or break your concentration when working. 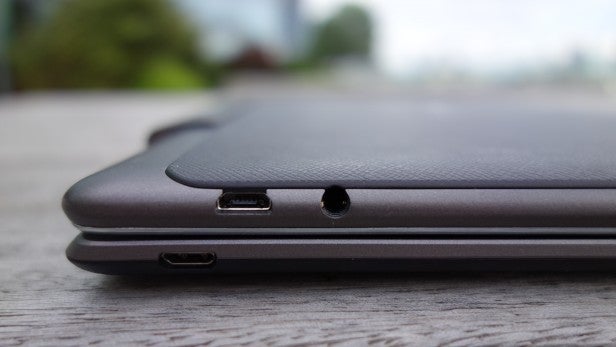 Also, I remain unconvinced by Asus’ bizarre dual-battery system. Like the Pixel C, the ZenPad’s tablet and keyboard sections are powered separately. However, unlike the Pixel C, both sections have to be charged independently using their respective micro-USB connectors.

I can’t for the life of me figure out why Asus hasn’t found a way to make it possible to pair the two batteries to boost battery life, or enable you to charge one part off the other.

Add to this the tablet’s piddly 16GB of internal storage – which, being fair, can be upgraded using the tablet’s microSD card slot – and my opening impressions of the ZenPad were underwhelming.

However, following a little more time with the device, I found myself warming to it.

The tablet may feel cheap and flex more than I’d like, but I can’t question the ZenPad’s durability. Using it as my main tablet and out-of-office word processor, the ZenPad survived a fair amount of use scratch- and chip-free. Highlights include it being accidentally bashed into a table while in my satchel, and an entirely not my fault encounter with a carpeted floor.

I’m also impressed by how well the keyboard works as an audio dock. Asus has loaded the keyboard with two impressive – by tablet standards – speakers with DTS-HD Premium Sound and Sonic Master technology.

Speakers are usually the first area to take a hit on budget devices, so the dual-speaker’s appearance on the ZenPad is impressive and to be applauded. The DTS functionality is nifty tech designed to provide a virtual – AKA fake – surround-sound experience.

It doesn’t really offer anything close to a full surround-sound experience, however – but it’s a positive nonetheless. Audio played on the ZenPad when docked displays more depth than I’d expect, and is free of the tinny quality that plagues competing tablets.

I still wouldn’t want to use the ZenPad as my primary music player, but the audio quality is more than good enough for movie and Netflix watching.

The ZenPad’s 10.1-inch screen is also pretty good for movie viewing. The 1,280 x 800 resolution isn’t anything to write home about, and you’ll definitely be able to spot individual pixels on inspection. But the screen’s colour balance and vibrancy are impressive when you consider the ZenPad’s price.

The IPS panel ensures whites are reasonably clean – although they rapidly distort when viewed at an angle. The maximum brightness isn’t dazzling, but it’s good enough to ensure the screen remains legible in everything but direct sunlight. Blacks aren’t the inkiest I’ve seen, but they’re above average compared to other IPS tablets I’ve tested in this price bracket.

There also wasn’t any sign of serious backlight bleed, which has been an issue on previous Asus devices I’ve tested.

Personally, I didn’t have a problem with the standard setting, where colours are suitably vibrant, without being overcooked., But for those who want to, the Asus Splendid app makes it easy to adjust the screen’s colour temperature on the fly. It includes preset standard, blue filter and Vivid settings, plus a manual colour temperature slider control. 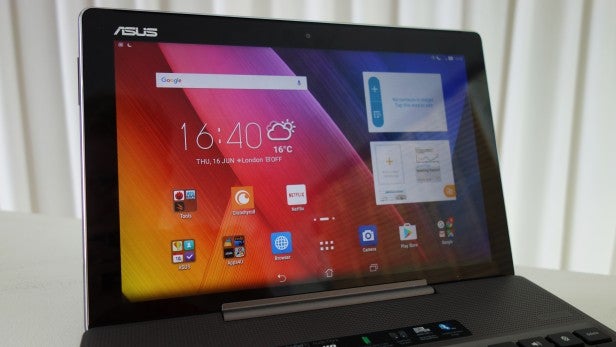 Splendid is part of the tablet’s wider suite of Visual Master technology. Visual Master is a collection of Asus technologies designed to improve screen performance.

In the past, I’ve found Visual Master to be a mixed bag. While the colour calibration tools are great, the Tru2life and auto-sharpening tech has been poor. On other ZenPads I’ve tested, the technologies have over-sharpened videos and altered their frame rate to the point where character movements in TV shows and movies look slightly bizarre. Surprisingly, however, I didn’t experience any such issues on the ZenPad 10.

Asus has also worked to ensure the ZenPad’s screen is good for productivity by adding Active Pen support. This means that if you splurge on one of Asus’ optional styluses, it will be possible to scribble notes or digitally paint on the ZenPad – although, given the screen’s low resolution, I wouldn’t recommend using it for artwork.