What is the Asus ZenBook UX330UA?

The ZenBook UX330UA is Asus’ latest entry into the premium laptop market, and with this 13.3-inch machine, the company is taking on the likes of the Dell XPS 13, MacBook Air and HP Spectre.

This is a world of ultra-thin and ultra-light laptops for around £1,000, and with the UX330UA’s £800 price, Asus has undercut many of its rivals. There are compromises, however, meaning it isn’t exactly a no-brainer.

The UX330UA is available in several specifications, with the one of test here the most common in the UK. The model on review is the Core i7, 512GB, 3,200 x 1,800 resolution screen edition. There are other versions available that swap out the screen (Full HD also available), processor (Core i5) and storage (256GB). Check which model you’re buying.

The UX330UA is not to be confused with the UX310, which uses a slightly thicker and heavier chassis and comes with both an SSD and a hard disk.

The UX330UA’s chassis is an evolution of last year’s UX303UA, coming in both lighter and thinner yet also managing to reduce the price. This ultrabook weighs just 1.2kg and will slide into any bag with its svelte 12.5mm figure. Those are pretty noticeable reductions on last year’s model, which weighed in at 1.4kg and was what now appears to be a rather portly 19mm thick. 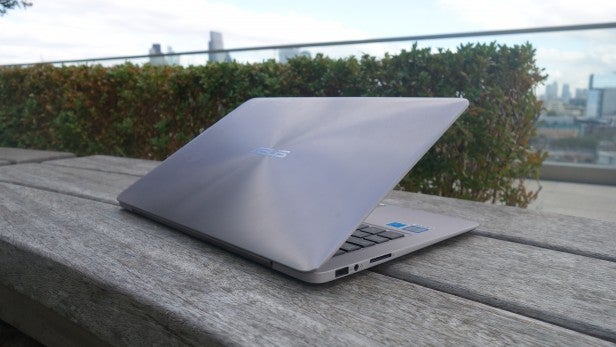 Those numbers may have moved in the right direction, but it’s clear to see where Asus has cut costs with this machine. Aside from the lid, which has a gorgeous spun metal silver finish, the rest of the laptop is unashamedly plastic.

The overall shiny coating of the laptop is achieved through tiny metallic particles in the plastic, but it’s a world away from the amazing carbon-fibre finish of the Dell XPS 13 and the timeless aluminium of the MacBook Air.

The same can be said of the keyboard. It offers a decent amount of travel and a good feel, but the keys themselves aren’t particularly grippy, and takes away another point from this laptop’s premium credentials. The keys are at least backlit, which is something Asus has flatly refused to include on its UK-bound ZenBooks in recent years.

WIth its thinner chassis, the number of full-size USB ports has fallen from three to two – one on each side. The full-sized HDMI port has gone, too, to be replaced by a micro-HDMI port on the right edge of the laptop. You also get a USB 3.1 Type-C connector, which will be able to power peripherals such as USB monitors and storage arrays on its own. An SD card reader and a 3.5mm headset jack are included, but there’s no Ethernet port. It’s unfortunate that although the smaller size means the Asus is more practical to carry around, it’s actually a much less practical to use in an office. You do at least get a USB to Ethernet adapter in the box, so if you prefer your internet wired, you won’t have to pay any extra. 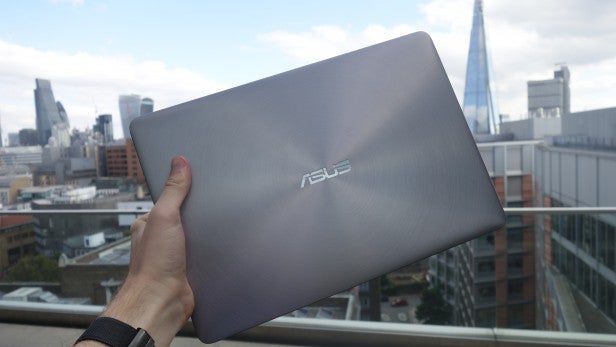 Despite the laptop’s compact size, the keyboard is big in all the right places, with nicely sized letter and number keys and reasonably large Backspace and Enter keys. The left Shift key is the same size as the rest of the letter keys, which makes it harder to hit, but it’s something I soon became used to.

Spot the power button. There it is! Like the MacBook Air, Asus has integrated the on-off switch into the keyboard itself but given it a switch that’s much firmer; it’s very difficult to hit accidentally. This has become a design feature frequently found across Asus’ laptop range, so it can’t be that bad.

The touchpad is reasonably good. It isn’t a Microsoft-certified Precision Touchpad, which means you don’t get that wonderful, instant feeling you get from the likes of the Dell XPS 13 or MacBook Air. I also encountered a couple of occasions where it would slow to a crawl and become incredibly laggy, which felt like a driver problem. It happened only twice while I was using it, but is something to watch out for. 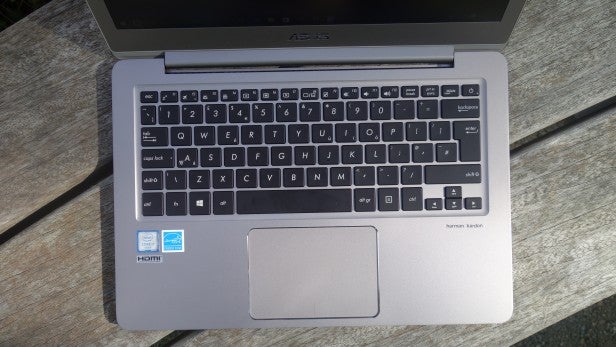 Asus has absolutely nailed the 3,200 x 1,800 resolution panel on the UX330UA. It’s rated as covering 100% sRGB gamut and a mighty impressive 72% NTSC gamut coverage, which is a wide and challenging colour space.

In tests, my calibrator put the screen at 99.4% sRGB coverage and 70% NTSC coverage. The screen is bright, too, at 281 nits. Contrast is slightly lower than I’d have like thanks to slightly elevated black levels. I measured it at around 650:1.

The only negative about the screen experience is the hinge, which is both slightly wobbly and doesn’t bend nearly as far back as I’d like.

On my lap, the display wobbled visibly with every keystroke, which isn’t ideal on a premium laptop. I don’t have any issues with the screen’s viewing angles, but in a very tight space – on a plane, for example – I’d want the screen to bend back much further than it does to keep things comfortable. The HP Spectre suffers exactly the same problem, so Asus isn’t alone here.

The speakers are surprisingly good, managing high maximum volume and a little bass presence. I’d happily watch YouTube and Netflix with these speakers, and music isn’t horribly crunched by them either.

Both of these are distinctly average. Even in pretty well-lit conditions, the webcam’s view of my face was murky. Faced with a challenging backlit situation, it chose to match its settings to the light rather than my face.

The microphone is of a pretty low quality, despite there being two of them in a dual array. Voices sound compressed, and while noise cancelling is effective, it lowers the voice quality even further. At no point was I unintelligible, but it was hardly a sterling performance.

Used as our main laptop for the review period
Tested for at least a week
Used consistent benchmarks for fair comparisons with other laptops
Reviewed using respected industry benchmarks and real world use
Next
Battery life, performance and conclusion Review