What is the Asus ZenBook UX305CA?

The Asus ZenBook UX305 was my second favourite laptop of 2015, only losing out to the slightly more powerful Dell XPS 13 (2015). Its combination of stylish, premium design, excellent screen quality and exceptional battery life made it quite the bargain for £649.

However, for more demanding users its Achilles heel was a processor that was just a little underpowered. That could be set to change with the new UX305CA, which includes the latest Intel Skylake processor technology.

So do the changes add up to an even more compelling device, or does this machine still falls short of utter perfection? Let’s find out.

This is a lovely looking machine. Fully clad in anodised aluminium and with a maximum thickness of just 12.3mm, the UX305CA is a slim and light picture of premium perfection. 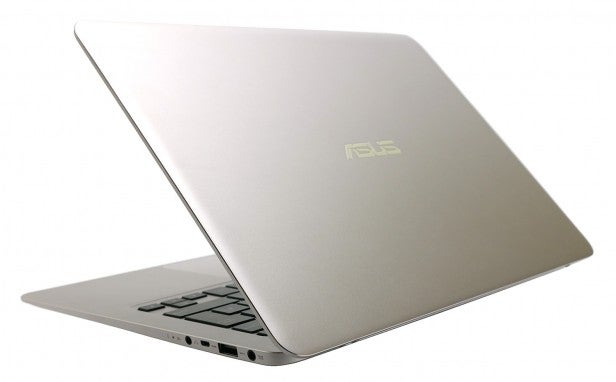 Design-wise, there’s certainly more than a nod to the 13in MacBook Air here. However, it doesn’t quite share its rock-solid feel.

Where the base of of the MacBook Air is milled from a solid piece of aluminium, the UX305CA has a pressed sheet-aluminium top that’s set over a plastic frame. The result is that there’s a bit of flex in the keyboard and base. This isn’t noticeable when typing, but becomes apparent if you pick up the device by its corner – a standard manoeuvre if you’re watching/reading something and want to carry your laptop to another room, for instance.

Still, greatly aiding the aesthetic is that the air intake and exhaust for the fan is – again, like the MacBook Air – contained in the strip that sits just in front of the hinge. As a result, there are no unsightly grilles on the underside of the machine.

When opened the screen also raises the back edge of the laptop slightly, providing a smidgen more airflow to help keep things cool the device is sat on a flat surface. 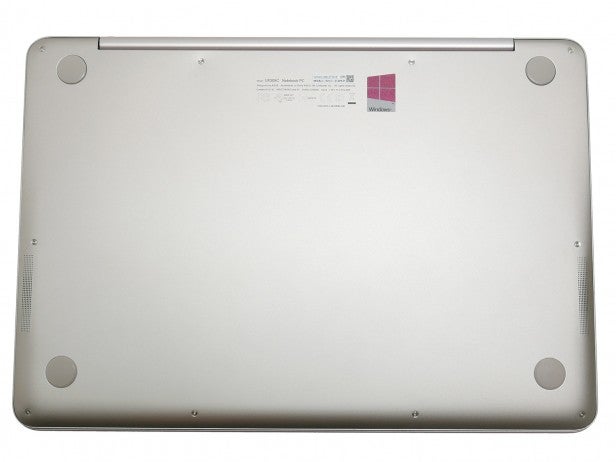 One area where the UX305CA displays a potentially key advantage over the MacBook Air is in its slightly better selection of connections. You get not two but three USB 3.0 ports plus a micro-HDMI for easy connection to a monitor (the Air offers a Thunderbolt for this purpose), and there’s an SD card reader too.

Network connectivity is taken care of by 802.11ac Wi-Fi, and a USB 3.0 to Gigabit network adapter is included in the box.

In use this proved an ideal selection, although I’d be interested in seeing more companies adopt the USB charging port technology used on devices such as the Lenovo Yoga 700.

Initially I was concerned about the power socket on this machine; it was fairly loose and the plug would easily work its way out. However, this proved to be only a temporary issue. I suspect something had made its way inside and was blocking the plug slightly – after a week of use it suddenly worked fine.

The power supply is incorporated into the plug, so there’s no mid-cable power brick to worry about. However, changeable plugs aren’t included, nor is there any form of clever cable tidying system, with only a velcro strap and a clip on the cable.

The headline feature of this laptop is of course its 3,200 x 1,800 pixel screen, which I’ll look at in more detail a little later. A 1080p resolution device is also available and can be had for as little as £550. However Asus hasn’t ordered stock of this model for the UK so it’s only available via grey import and is likely not to have a proper UK keyboard.

Other variations include the option of 4GB or 8GB of RAM and either a 128GB or 256GB SSD. The former is £650, which makes it decent value, while the latter adds a hefty £150 or so to the price, with the top spec model going for around £815. It’s this latter model I’m reviewing here.

Perhaps the most important consideration for many buyers will be what lies at the heart of this laptop, which is the Intel Core M3-6Y30 processor. This brings a performance boost over the Core M processor in the original UX305, which was just a touch sluggish for more demanding users.

The UX305CA also offers a hefty 40% graphics performance boost. All that and it uses a touch less power too, which could lead to a modest bump in battery life – although the extra screen resolution is likely to take its toll with this particular device.

An area where some cost saving can be seen is on the keyboard, which lacks a backlight. As a result, typing in the dark is a little more of a struggle.

Used as our main laptop for the review period
Tested for at least a week
Used consistent benchmarks for fair comparisons with other laptops
Reviewed using respected industry benchmarks and real world use
Next
Screen Quality, Keyboard and Trackpad Review