What is the Asus Zenbook UX303LA?

The Asus Zenbook UX303LA is the latest laptop to arrive at TrustedReviews with an Ultrabook sticker gleaming on its wrist-rest.

It’s a great-looking system that’s up there with the market’s sleekest ultraportable notebooks, but it doesn’t have the high price you’d expect. Instead, the UX303LA comes in at a reasonable £700. 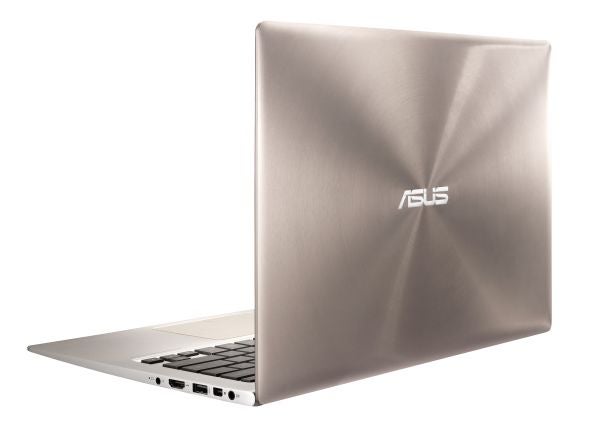 Like many Ultrabooks, Asus has built this machine’s exterior from slick metal. Like most of its rivals, it’s also a slim device that tapers to a thin front edge – in this case, it narrows down to an impressive 3mm.

The metal is everywhere, from the underside to the bezel surround, and it’s inevitable that this machine will draw comparisons to other metallic machines, such as the Apple MacBook Air and HP’s Spectre 13, though of course it’s a design Asus has carried since its first ultrabook the UX31E.

The metal is coloured with a shade that Asus calls “smoky brown”, and it looks good in a satisfyingly subtle way. The material on the inside has a familiar brushed texture, but the lid stands out with Asus’ signature circular spun pattern. When the lid is lifted, it’s business as usual – aside from the small bit of text that indicates Bang & Olufsen audio.

Drill down to the details, and the UX303LA can’t quite compete with its more expensive competition. Its 1.45kg weight is reasonable for an Ultrabook, but the HP and Apple machines are a little lighter. Even Lenovo’s Yoga 2 Pro hybrid dips below 1.4kg.

It’s a similar situation when it comes to width. The UX303LA’s 18mm body extends to 20mm with its rubber feet, which is thicker than every competitor.

The wrist-rest depressed slightly when we pushed the expanses of metal on either side of the track-pad, and there was a little movement in the base. The screen is stronger, with no distortion on the panel itself. The Asus’ strength is on a par with the HP and Lenovo, but it can’t compete with the rock-solid MacBook.

Connectivity is reasonable. The outside serves up three USB 3 ports, HDMI and mini-DisplayPort outputs and an SD card slot. The inside provides dual-band 802.11ac Wi-FI and Bluetooth 4.0. There’s no room for Gigabit Ethernet, but Asus supplies a USB adapter in the box, and another to convert mini-DisplayPort to D-SUB.

The resolution is modest enough to ensure that the Asus doesn’t fall foul of the scaling issues that afflicted the Lenovo’s 3,200 x 1,800 panel, and it’s also a better option than the 1,440 x 900 screen offered by the Macbook Air. It can’t quite offer the sharpness of the HP, which had a 1080p panel.

Accuracy wise, the Asus gets off to a good start with a brightness level of 366 nits – that’s higher than the Lenovo, Apple and HP systems. The contrast ratio of 813:1 is good, too – only the HP was better. Those results, when combined with the anti-glare coating, meant that this machine coped with use outdoors or under bright lights, although the anti-glare material did make the screen grainy. 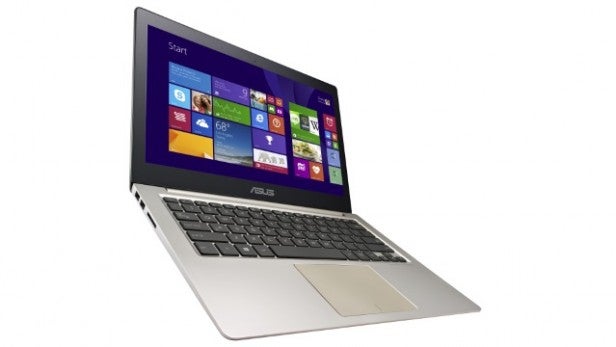 Elsewhere, the UX303LA falls behind. The measured colour temperature is a cool 7,370K, which is further away from the 6,500K ideal than every rival. The Asus’ average Delta E of 9.25 is also poor.

The cool colour temperature and lack of colour accuracy mean poor real-world results. The bright reds and yellows in our test images lacked vibrancy, and skin tones felt pallid. This screen also handled just 57.2% of the sRGB colour gamut, with only blues displayed properly – another factor that makes this panel feel cool and lifeless.

The poor colour accuracy and gamut coverage, when combined with the middling resolution, mean the UX303LA isn’t a good choice for those that regularly edit images or video, and won’t be the best for watching videos either. Otherwise, the brightness and contrast make it a fine panel for day-to-day use: if you’re browsing the web, playing casual games or using Office apps, it’s ample.

The speakers surprised us. We expect slim, light laptops to have tinny, weak audio, but the Asus delivered punchy music. The mid-range was meaty, and the high-end proved snappy but not overwhelming. There’s a little bass there too, which helps round out a reasonable audio profile. We’d prefer a little more low-end punch and a tad more volume, but the UX303LA is fine for listening to music or watching movies in a small room.