There are a few different
config options available for the UX302. The specific version we looked
at is the Zenbook UX302LA, which has an Intel Core i7-4500U CPU (1.8GHz or 3.0GHz with Turbo Boost), 4GB of
RAM, a 500GB hard drive and 16GB of Flash memory to enable quick booting
from sleep.

It comes with the sort of day-to-day performance
we’ve come to expect from a SSD-equipped Ultrabook. Awaking from sleep
takes between 2-5 seconds and booting from cold takes 15 seconds. It’s a
fairly snappy laptop.

A Core i7 power is plenty to work with
for most needs too, even if it is a low-power version of the processor
designed to keep a portable laptop running for a good few hours off its
battery. In Geekbench 3 it scores 5772 points. That’s ahead of the Samsung Ativ Book 9 Plus,
which costs a few hundred pounds more but only packs a Core i5 Haswell
processor, not an i7. Part of the reason why the Asus is able to be so
competitive in this area is because of its use of a 5400rpm 500GB hard
drive rather than a a 256GB SSD like the Samsung Book 9 Plus, which
means Asus has saved money on the storage and has diverted it to a
faster CPU.

What you get for £1,000 in terms of pure performance isn’t bad at all, given how style obsessed the laptop appears to be. 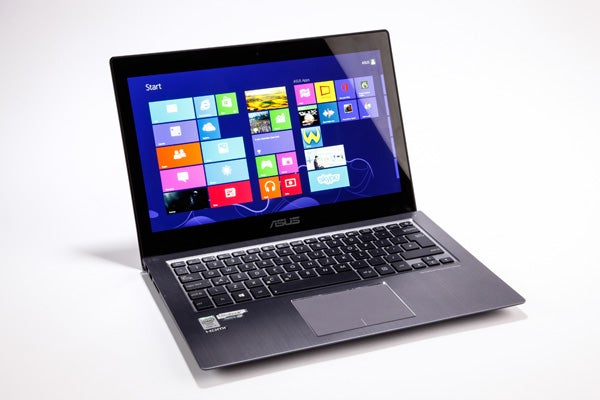 There are some variants of the UX302 that come with dedicated NVIDIA
graphics chips, but our review version makes do with the integrated
Intel HD 4400 graphics. This is not a gaming PC.

The
Haswell-generation chipset used here makes some improvements in terms of
what integrated graphics chipsets are capable of, but you’re looking at
playing fairly low-end games only. Or higher-end ones with the
graphical whizz-bang elements turned off and the resolution turned down.

In the 3DMark bench, the scores read out as 33,457 in the
low-intensity Ice Storm test, 4,287 in the mid-level Cloud Gate. Abstratced they don’t mean a
great deal, but these are exactly the scores we’d expect of a laptop
with a good CPU but limited graphics power, which means only basic and older games need apply. 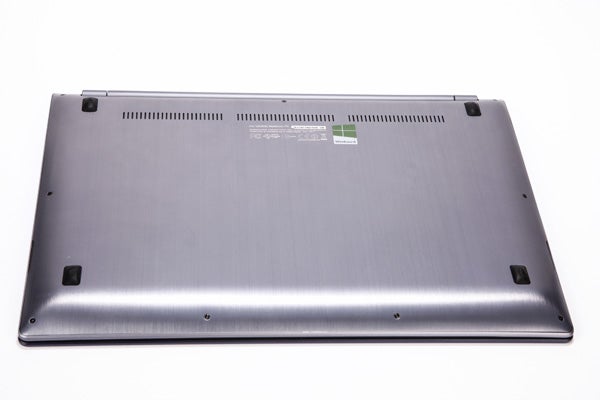 Like
most Ultrabooks, the Asus Zenbook UX302 is pretty quiet even when under
significant strain. It uses two fans, letting the RPM of each stay
relatively low in order to keep noise down. Even when under
system-straining pressure, the sound amounts to just a light whirr from
the right hand-side of the laptop.

The intake for the fan system
sits on the bottom of the laptop – little cut-outs in the aluminium
bottom panel run the length of the underside. Hot/warm air is then blown
out of the upper part of the laptop hinge, up the screen and vaguely in
the direction of whoever is using the laptop. The fans don’t pump out
air with enough force to make them actually blow in your face, though.

After
playing some fairly graphically intensive games for 30 minutes, the
Asus Zenbook UX302 underside hit 42 degrees centigrade. It’s warm,
certainly, but we didn’t experience any uncomfortable warmth from the
laptop during testing.

The heat does extend to the top of the
laptop too, mostly where you’d rest your right hand on the keyboard
surround – the left part stays fairly cool. 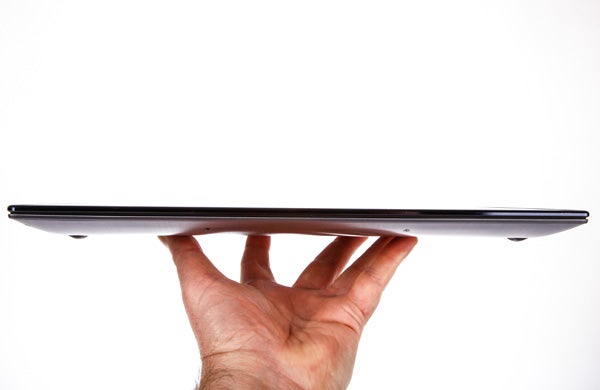 In our initial battery test with the auto brightness setting engaged, the Zenbook UX302 lasted for 4 hours 48
minutes with our relatively low-intensity battery benchmark, which is a
mix of web browsing, video viewing and producitivity on a loop. It’s not
a dreadful result, but it’s disappointing for an Ultrabook at this price and is way
off the circa 10 hours you get with a MacBook Air.

However, as this seemed a bit low for a laptop of its grade we re-ran the test with the auto brightness turned off. Instead we manually set the brightness to around 40 per cent, which is quite usable indoors. It came out with a much better result of six hours 26 minutes. This is bang on what the rival Sony Vaeio Pro 13 achieves. It’s still lower than the scores of the MacBook Pro and MacBook Air, but the comparison isn’t entirely fair as they run completely different systems.

Used as our main laptop for the review period
Tested for at least a week
Used consistent benchmarks for fair comparisons with other laptops
Reviewed using respected industry benchmarks and real world use
Previous
Asus Zenbook UX302 Review Next
Keyboard, Trackpad and Verdict Review