What is the Asus ZenBook Pro UX550VD?

The ZenBook Pro is one of the more expensive ZenBook models out there, boasting premium specs to match that high asking price.

As well as a nippy Core i7 Kaby Lake chipset, you get dedicated Nvidia GeForce graphics for blasting through some of the latest games. Combined with Asus’ finger-friendly keyboard and a realistic 15.6-inch display, this is a beefy laptop to match even quite demanding requirements.

So is this top-end ZenBook worth a punt, or should you look to other similarly priced laptops such as the Dell XPS 15, which boasts very similar specs? 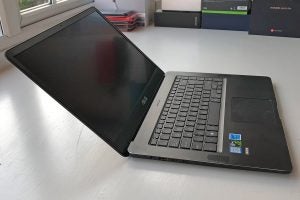 The ZenBook Pro’s marketing blurb may throw around such terms as ‘elegant’ and ‘sophisticated’, but my first impressions were very different. ‘Rugged’, ‘resilient’ and ‘beast’ are a bit more to the point.

That’s not to say the UX550VD has been whacked senseless with every branch of the ugly tree. You’ll find a few stylish little touches here and there, including the circular lid pattern and those funky power indicators housed on the laptop’s lip. All the same, this feels more like a machine built to withstand plenty of daily punishment, rather than an elegant device to turn heads in Starbucks.

If you want more of a looker, check out the Dell XPS 15, the Huawei MateBook X Pro or Apple’s MacBook Pro instead. 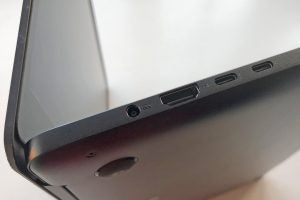 At 1.8kg, the ZenBook Pro isn’t light, either. Yes, it’s perfectly possible to carry it around all day in a backpack, but this is a laptop best moved room-to-room in a household and only occasionally lugged outside. Again, Huawei’s super-light MateBook is a better option in this regard. That said, Asus’ beast is surprisingly slender given the other dimensions. Even at its thickest point, the device doesn’t quite hit 2cm.

From the shiny silver lid to the matte chassis, every inch of this laptop feels solidly constructed. Poke and prod as much as you like, you’ll struggle to find a weak spot. Definitely a bonus if you plan on letting young children loose on it.

Connectivity is quite good, too – as you’d expect from a machine this size. You get plenty of USB ports, including two Type-A and two of the faster and reversible Type-C connections. In addition, there’s an HDMI port and microSD card reader – although, sadly, there’s no Ethernet port for wired web access. 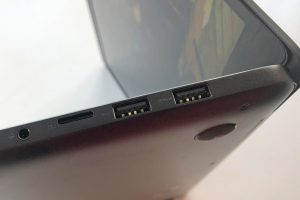 I’m a big fan of Asus keyboards, which pretty much guarantee a comfortable and intuitive touch-typing experience. Therefore, it’s no surprise that the UX550VD lives up to expectations and provides some solid usability.

The keyboard stretches across a good portion of the ZenBook Pro’s chassis, with a chiclet finish to space out those keys. Nothing feels cramped, although the cursor keys are once again squished into a single row. That aside, I rarely made mistakes while touch-typing at my maximum speed. My only real complaint was the right-most row of buttons (home, pgup, pgdn and so on), which pushed the enter, backspace and shift keys inwards. This unusual setup took a bit of adjustment, although proved fine after a while.

Only a hint of sponginess is found towards the centre of the board and this certainly doesn’t affect the experience. Decent travel provides plenty of feedback, too. 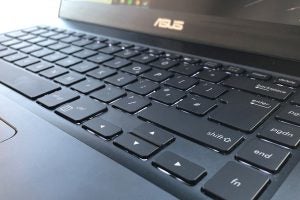 If you’re going to be working well into the wee hours, the ZenBook’s keyboard backlighting will be an essential feature. You can cycle through three levels of brightness to match your conditions and turn the effect off entirely to save battery life.

I also didn’t mind using the ZenBook Pro’s relatively spacious touchpad. Although this doesn’t quite stretch to the limits of the laptop’s palm rest, it proved a decent size for editing photos and other fiddly tasks. Even the built-in mouse buttons aren’t terrible. 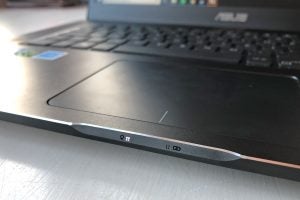 Another highlight of Asus’ laptop is the 15.6-inch LED backlit display. With its Full HD (1920 x 1080) resolution and generous size, I found it a great way to take in a movie or a few TV episodes on the move. Visuals are pleasingly crisp, with plenty of detail reproduced when browsing photos or enjoying video.

Visibility certainly isn’t a problem, either. The wide viewing angles and anti-glare coating mean that you can share the screen with others, even when you’re sat outside on a sunny day. 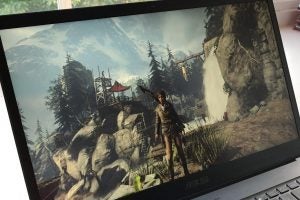 Good news for creative users, too, as an impressive 96% of the sRGB gamut is comfortably covered. Our display tests also found that 74% of the Adobe RGB range is also represented. In other words, you can expect realistic image reproduction, similar to the Dell XPS 15 and Apple MacBook Pro panels.

Harman Kardon has stamped its approval on the ZenBook Pro as far as audio quality goes, although big-name backing doesn’t often mean too much in this realm.

Many laptops we review have just two speakers, infuriatingly housed on the bottom of the device. That means any audio that blasts out is muffled by your crotch or the desk. Thankfully, the UX550VD boasts two additional speakers, this time positioned either side of the keyboard (à la MacBook Pro).

Pump up your music and the sound quality is understandably flat and muddy, as you’d expect from laptop speakers. However, at top volume they’ll also easily fill a room with sound, and they proved perfect for watching Netflix in a noisy kitchen or outdoor location. 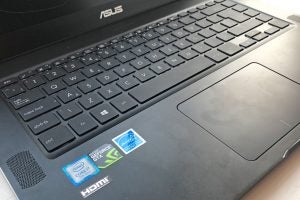 An Intel Kaby Lake Core i7-7700HQ running at a clock speed of 2.8GHz is packed into the ZenBook Pro, with 8GB of RAM to help keep things running smoothly. You also have dedicated graphics in the form of Nvidia’s GTX 1050, with 4GB of its own GDDR5 memory for rendering visuals.

Performance is just as strong as rivals such as the Dell XPS 15 – which isn’t too surprising considering the specs are near-identical. No matter how many apps you’re trying to flip between at one time, the ZenBook Pro happily keeps up. Great news if you’re a multi-tasker.

In the standard benchmark tests, this laptop threw out the following scores.

That GeForce 1050 GPU means that you can play some of the latest games with a decent frame rate during breaks. We tested some recent online titles such as Hunt: Showdown, as well as popular games such as Rise of the Tomb Raider, all of which were perfectly playable at high detail levels. As a frame of reference, the Rise of the Tomb Raider benchmark threw out an average score of 36fps. 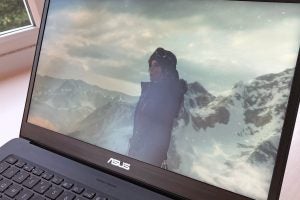 Of course, the ZenBook Pro can’t match recent gaming laptops when it comes to graphical performance. This is more an option for people who’d like to occasionally relax by blowing up terrorists and alien mutants, rather than dedicated gamers. Basically, as long as you aren’t hoping to hook up the ZenBook to a 4K monitor and get some Ultra HD gaming on the go, or play the latest titles on maximum settings, this laptop should appease.

3DMark spat out the following scores for the ZenBook Pro.

Even when punishing the ZenBook with some graphically intensive titles, the laptop didn’t warm up too much. The ventilation system uses a dual fan setup to push out that hot air, and thankfully the fans aren’t too noisy either. Certainly nothing compared with the aircraft-taking-off-style ruckus you get from many gaming machines.

The SSD boasts half a gigabyte of storage space and pretty standard read/write speeds. Data is read at a rate of 512MB/sec, and written at 439MB/sec. 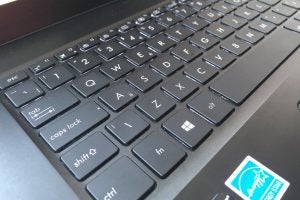 One of the benefits of that larger chassis is the size of battery fitted inside. The ZenBook Pro boasts solid battery life, offering a full working day of use between charges. Even if you absolutely hammer it by downloading massive files while streaming video, you’ll still get around four to five hours of life. Only resource-guzzling games seriously impact longevity, taking battery life down to a couple of hours.

In the standard Trusted Reviews battery test, the ZenBook Pro really impressed. A constant loop of video playback and web browsing gave a return of ten hours on a full charge. That’s better than almost every other laptop we’ve tested so far in 2018.

Read next: Top ten tips when buying a laptop

There’s no denying the ZenBook Pro’s prowess when it comes to performance. The Kaby Lake Core i7 chipset and Nvidia GPU combine to blaze through games and other intensive tasks, while the 15.6-inch screen provides a perfect portal to your media.

Of course, this beast isn’t quite as attractive or portable as some of its rivals such as the XPS 15 or MateBook Pro X. If that doesn’t bother you, we say jump right in.

The ZenBook Pro boasts premium performance, strong usability and a well-designed display – all for a typically steep asking price.