The laptop’s Core i7-6700HQ Skylake processor is one of Intel’s fastest mobile chips, and this shows in our benchmarks.

As a result, the UX501VW will be at home with anything from video editing to CAD; the only caveat being that 12GB of RAM isn’t up there with the 16GB I’d expect to see on such a high-end laptop. What’s more, all versions of the 15in MacBook Pro are supplied with 16GB of RAM.

However, Asus does go some way to make up for this with its generously-sized 512GB SSD. It’s PCI-E-based that, unlike traditional SATA-based drives in laptops of yore, there are no bottlenecks. The AS SSD benchmark reported sequential read rates of 1,785MB/sec and writes of 265MB/sec, which are massive scores. The laptop certainly starts in an instant and feels responsive at all times. 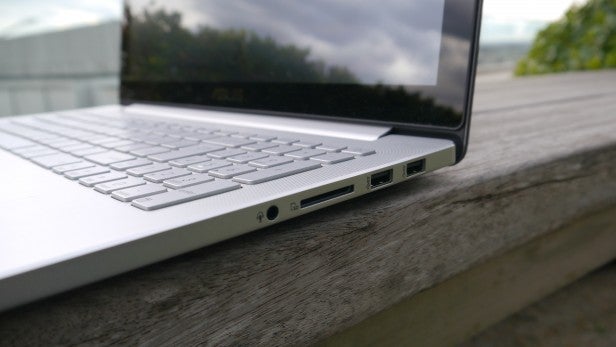 For reference, a PCI-E SSD of this size and a 4K screen on the Dell XPS 15 will require purchase of the £1,599 model; you’ll need to spend £2,000 for the equivalently specified MacBook Pro.

This was proved by our tests in Dirt Rally and Fallout 4. In Dirt, when running at 3,840 x 2,160 with Low detail and no anti-aliasing, I saw an average of 30.5fps, dropping to a jerky 22.5fps in places – not really enough for consistently smooth gameplay. However, after dropping the resolution to 1,920 x 1,080, I saw a smooth average frame rate of 42.7fps, even with High detail and 4x anti-aliasing switched on. 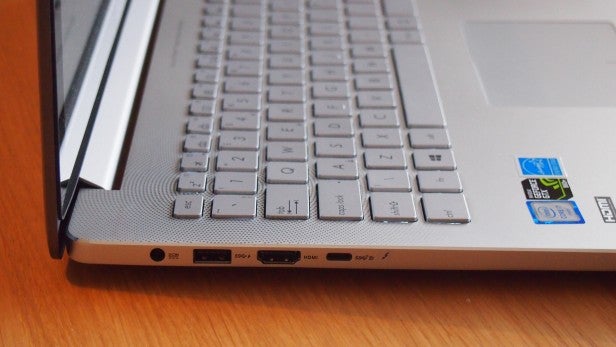 It was a similar story with Fallout 4. At the screen’s native resolution I saw barely more than 15fps at Low detail settings, but at 1,920 x 1,080 and Medium detail, the game ran at an average of 38.4fps and never dropped below 30fps. Both games still looked great at these settings; the only real downside was slightly versus native resolution was less sharp in-game text.

You can get more powerful gaming laptops for quite a lot less money if you don’t need all the other bells and whistles that Asus includes on this more work-focused machine.

The tests at testufo.com showed some mild motion blur, but this didn’t worry me when playing games. One problem I did have was an odd diagonal shearing effect in some titles – namely Star Wars: Knights of the Old Republic II and open-source arena shooter Warsow. No amount of fiddling with V-Sync fixed this.

Asus has managed to squeeze a substantial 96Wh battery into the UX501VW’s chassis. In the Powermark battery benchmark, which simulates web browsing and video playback, the laptop lasted for 7hrs 10mins from a full charge.

I found that it was possible to easily get through most of a working day without needing to plug in the UX501VW. An hour of Netflix watching consumed 28% of the battery, so the laptop will manage almost four hours of solid video away from the mains. 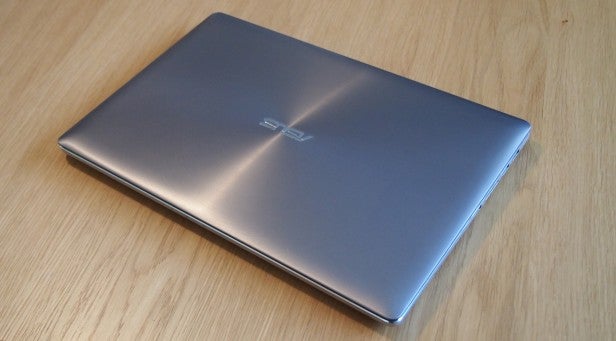 Should I buy the Asus ZenBook UX501VW?

There’s no doubt the Asus ZenBook Pro UX501VW-FJ098T is a seriously expensive laptop. However, taking into account the quality of its screen, its 2D and 3D performance and battery life, it gets almost everything right.

If you’re after a super-premium laptop then your choices boil down to the Asus, the MacBook Pro or the Dell XPS 15. The Asus isn’t quite as beautiful as the Apple laptop – and Windows still can’t match OS X for high-DPI scaling and touchpad gesture support – but the UX501VW is around £500 cheaper than the Mac for the equivalent specification.

The Asus is a similar price to the 4K version of the XPS 15, but it doesn’t have a touchscreen nor does it look as fancy. However, the inclusion of a numeric keypad and its superior battery life make it a better choice for serious work.

The MacBook remains a more desirable piece of kit, but if you’re sticking in the Windows camp then the Asus ZenBook UX501VW is tied for first place with the Dell XPS 15 as our favourite premium laptop.

Asus strikes again with a sensible yet powerful top-end laptop: you won’t get much more bang for your buck.