What is the Asus Zenbook Flip S?

Asus has long been at the forefront of thin and light laptop design for Windows users, and the Zenbook Flip S is just the latest example of what it can do. This stunning convertible laptop sports an all-metal exterior and its screen can flip round so that it can be used as a tablet.

Such a premium design doesn’t come cheap, though, so you’ll be looking at the better part of £1200 for one of these machines. But with that outlay should come one of the finest Windows laptop/tablet experiences around. Should.

Impressively thin, light and beautiful laptops aren’t exactly a rarity these days, but the sheer class of the Flip S is still a cut above. For a start, it’s incredibly slim and light, measuring 131 x 218 x 10.9mm and weighing just 1.1kg. For a convertible laptop with a relatively heavy glass-fronted screen, that’s mighty impressive.

The exterior is also all-metal, which gives an instantly premium feel. It also feels nice to the touch, unlike some aluminium laptops that have a slightly too aggressive brushed effect to them. The top is patterned with Asus’ signature concentric circles, but it remains smooth. 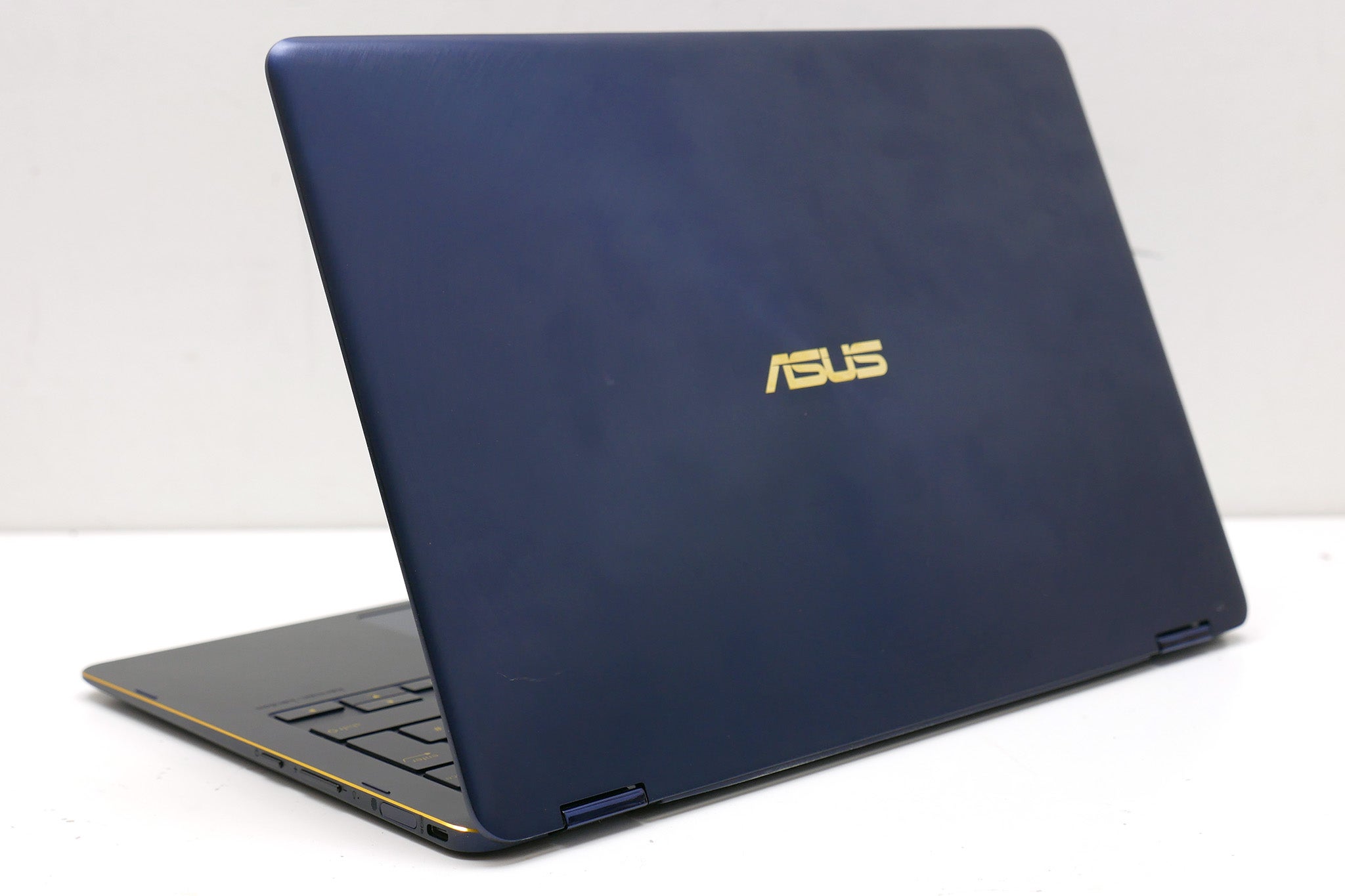 Asus’ intriguing choice of a dark blue chassis with gold highlights and backlighting – a dark grey version is also available – may not appeal to everyone, at least at first, but it does work surprisingly well. It’s something a little different without feeling forced, plus the yellow backlighting on the keys is more mellow and a touch less distracting than bright white.

Being a convertible design, the hinge is all-important to this laptop, and thankfully it passes muster. It’s easy to flip the screen round into its tablet orientation, plus it stays put at whatever angle you place it. Also, the weight of the screen doesn’t make the laptop top-heavy, so it isn’t prone to toppling backwards.

However, despite Asus’ best efforts, in its tablet form this is still a fairly heavy and slightly unwieldy device. It just can’t be helped, as you’ve got the thickness of the whole lower section sitting behind the screen, plus said screen is 13.3 inches across – an iPad Mini this thing is not.

This still very much feels like a premium thin and light laptop with a touchscreen first, and a tablet device second. Rather than for everyday use, the tablet form factor here is great for drawing and is can be nice to perch on the lap and watch a film, when lounging in certain positions.

Plus there’s a position where you rest the laptop on its keys and have the screen flipped up at the front, which is great for watching video in cramped spaces like planes and coaches, as well as just bringing the screen closer in when you’ve got it sat on your lap.

As with many 2-in-1 laptops, one of the concessions to the tablet form factor is that the power button is placed on the side. Sometimes this can be a bit awkward, as it’s difficult to locate, especially if you’ve got several things plugged in next to it. 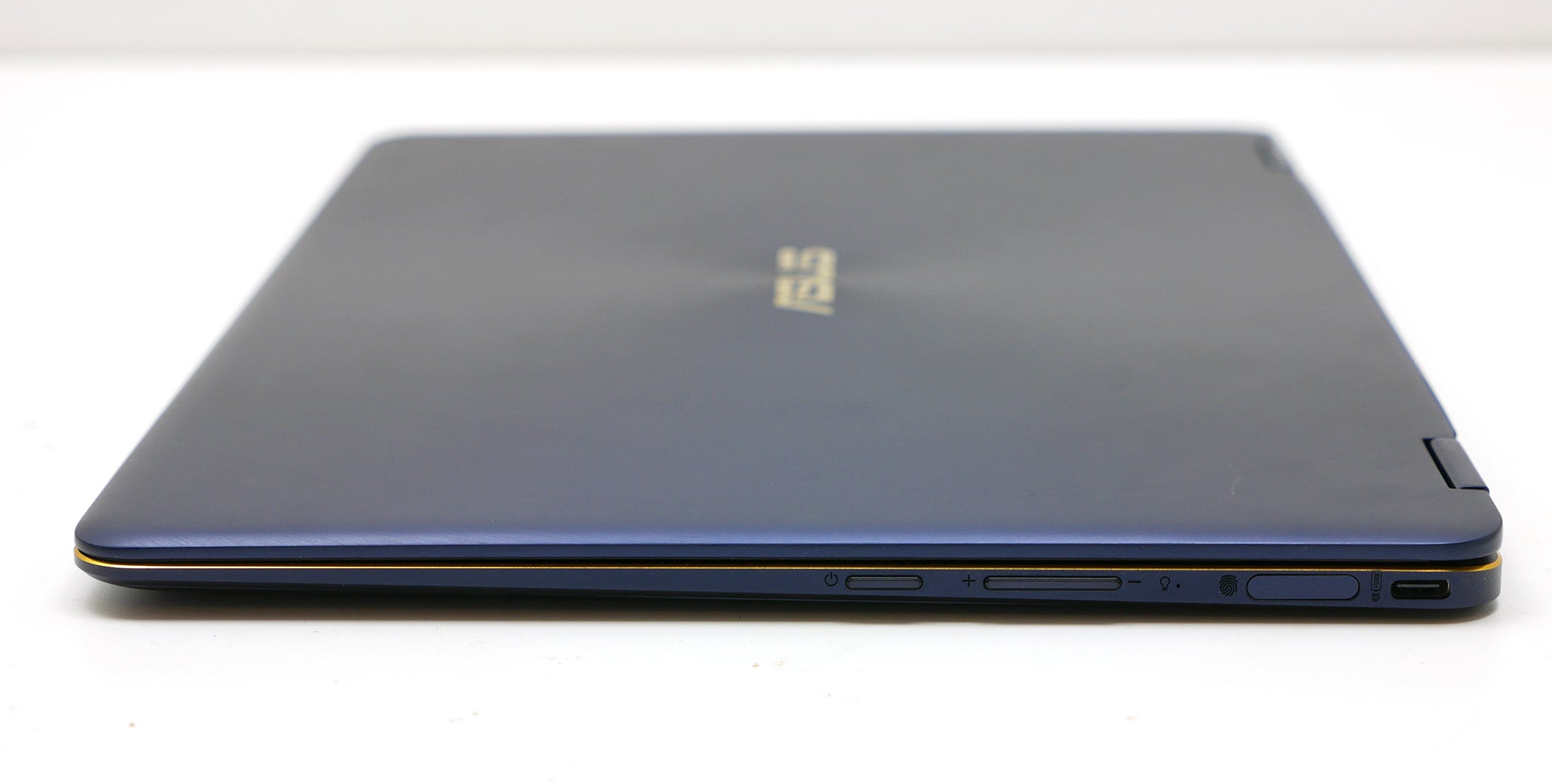 However, here there’s no connectivity in front of the button so it soon became a natural motion to just slide a finger along the side until it finds the button. That said, every now and then I did accidentally press it while picking up the laptop.

Beyond the power button is the volume rocker – a welcome addition from the tablet world, as it saves on keyboard space – then after that is a fingerprint reader. Despite being a sliver of a thing, it works well. Windows Hello prompts you to press your finger on the reader from different angles when setting it up, and as a result when logging in the system coped surprisingly well with whether the laptop is in laptop mode or tablet orientation. 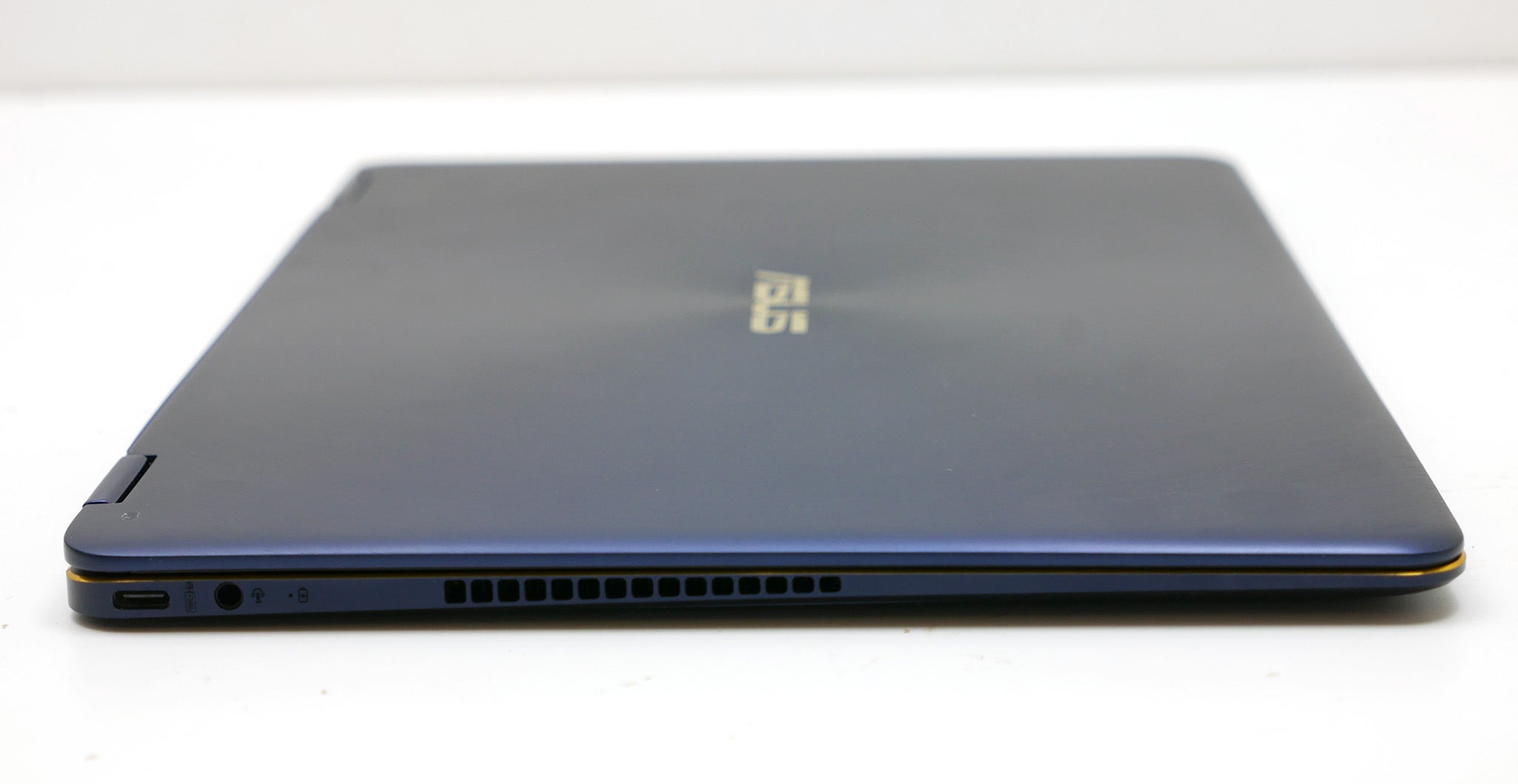 The final feature of the right edge is a USB Type-C socket, something which is mirrored on the left edge. In front of that is a headphone jack.

That’s it for your connectivity, though. That may not sound too bad, but this laptop does charge off USB Type-C, so one of those ports is occupied when you’re running off mains power. It’s good, then, that Asus includes a dongle in the box that adds a full-size USB port, HDMI port and a further Type-C port. It would be nice to have an SD card reader too, but overall it’s not a bad selection.

Just how irked you are by having to carry around dongles is largely down to personal preference, but considering the size of this laptop Asus’ solution seems like a reasonable compromise.

It’s clear from the first moment of using this laptop’s keyboard and trackpad that they are both top-notch.

The keyboard has a spacious and intuitive layout, with none of the odd key placements or squashed keys of some laptops. The backlighting also works really well with nice even, easy-to-read lettering. As mentioned above, it’s also really nice that the yellow colouring is bit easier on the eye, though light spilling out from the side of the keys is still white – thankfully it’s not too noticeable.

The key action is also excellent, with a crisp and even response that means you know precisely when you’ve hit a key. Accomplished touch typists will be right at home on this device.

As for the trackpad, it’s nice and large, making it easy to accurately track across the whole screen in one go. Its aluminium surface is also wonderfully smooth, so your fingers glide effortlessly across it. Tracking is also very accurate and the click action is light yet crisp. It’s simply a joy to use. 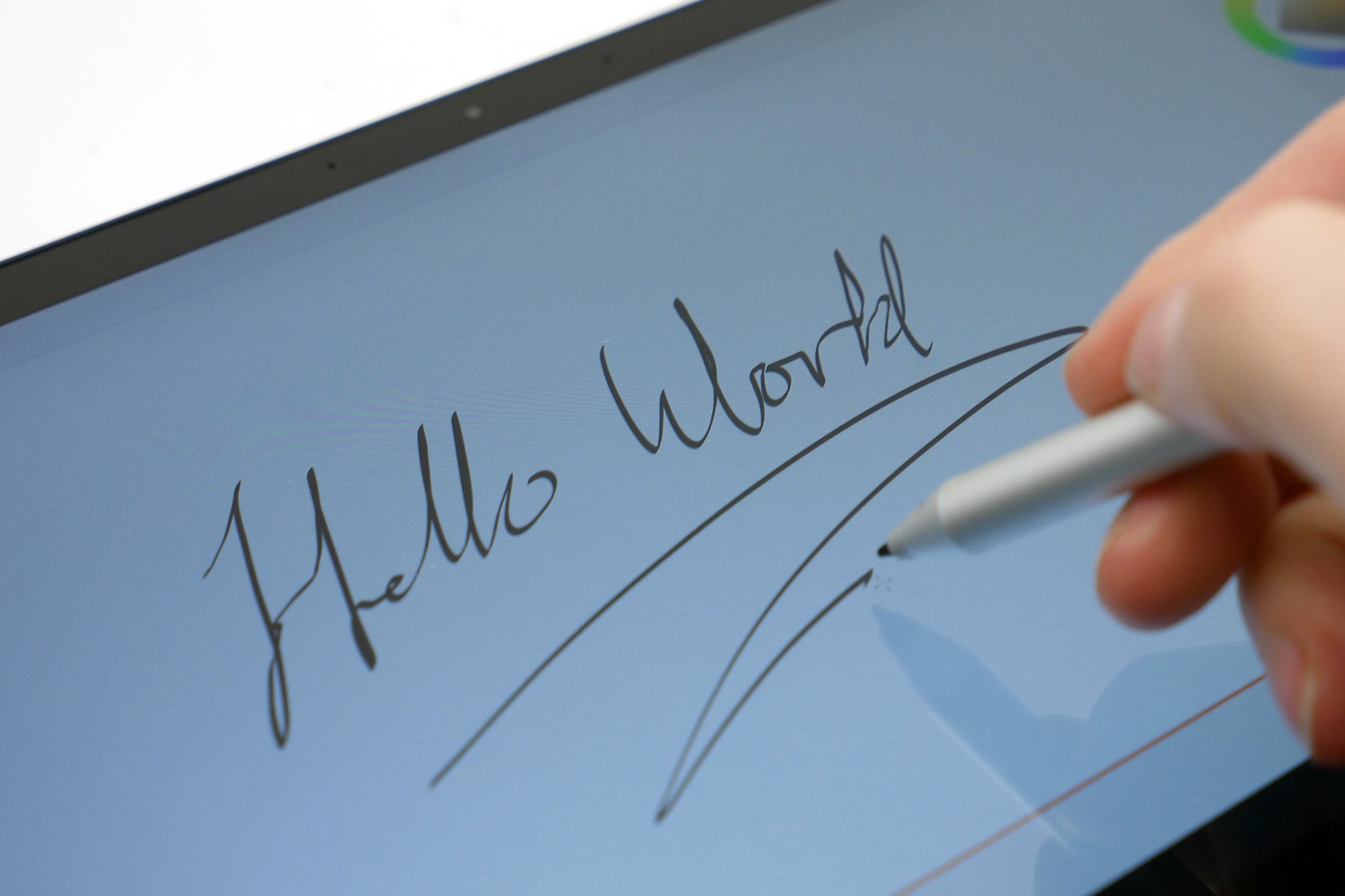 You can also use the Asus Pen with this laptop. It looks just like an Apple Pencil and functions in largely the same way. It’s great for if you want to draw on the screen or just generally to interact with more intricate stuff while the device is in tablet mode.

However, there’s nowhere to dock the device and no way to charge it either, with it instead using a single disposable AAA battery that Asus claims will last up to ten months. It boasts 1000 levels of pressure sensitivity with 10g activation force, which is decent but doesn’t match the 4096 levels of the Microsoft Surface’s stylus.

Overall it seemed reasonably responsive and accurate, though the tilt prediction didn’t seem to be all that clever. That is, if you tilt the Pen as you would when holding a pen or pencil, the tip doesn’t feel like it’s hitting the place you’re putting it. It’s possible this can be tweaked in software, though.

Used as our main laptop for the review period
Tested for at least a week
Used consistent benchmarks for fair comparisons with other laptops
Reviewed using respected industry benchmarks and real world use
Next
Battery life, performance and verdict Review