The Asus ZenBook Flip 15 is a confused combination of ideas that struggles to justify its price. From gaming to productivity, there are plenty of devices on the market that are succeeding at doing what the ZenBook Flip 15 only tries to do.

The Asus ZenBook Flip 15 sees a combination of concepts, from convertible to gaming to a touchscreen trackpad.

Asus introduced the ScreenPad as the ZenBook Flip’s new, stand-out feature – hopping aboard a 2019 touchscreen trackpad trend that saw the HP Omen X 2S give it a go too.

The ZenBook Flip 15 isn’t all about the ScreenPad, though. You can pick it up with a dedicated GPU for extra gaming power, despite having a rather large convertible form.

But can the ZenBook Flip 15 ace all these elements to be a fantastic all-rounder? Let’s find out.

The Asus ZenBook Flip 15’s design isn’t bad for a device with an identity crisis.

Class the Flip 15 as a high-end productivity device then it is lagging behind competitors. It’s almost double the weight of flagship ultrabooks from the likes of Dell, Microsoft, Apple and LG and a wee bit chunky too. It just looks rather unremarkable, especially when placed next to an XPS or Surface device.

Judge it as a gaming laptop, however, and it’s one of the better-looking units you’ll find – short of some sleeker devices from Razer and MSI. Gaming laptops are often guilty of veering into “extremely tacky”, but with its metal body and mild colour choices, the ZenBook Flip 15 is far from that.

But then again, calling this a gaming laptop would be an exaggeration. In reality, it straddles the two: it’s for those who are after a larger laptop, primarily for use at home, but one that incorporates a few neat gaming and productivity friendly touches.

The port selection is generous, which is expected considering the size. Included on the ZenBook Flip 15 are two USB-A, one USB-C, one HDMI, one SD card reader and a headphone jack. The lack of Thunderbolt 3 for super-fast transfer speeds is disappointing though. 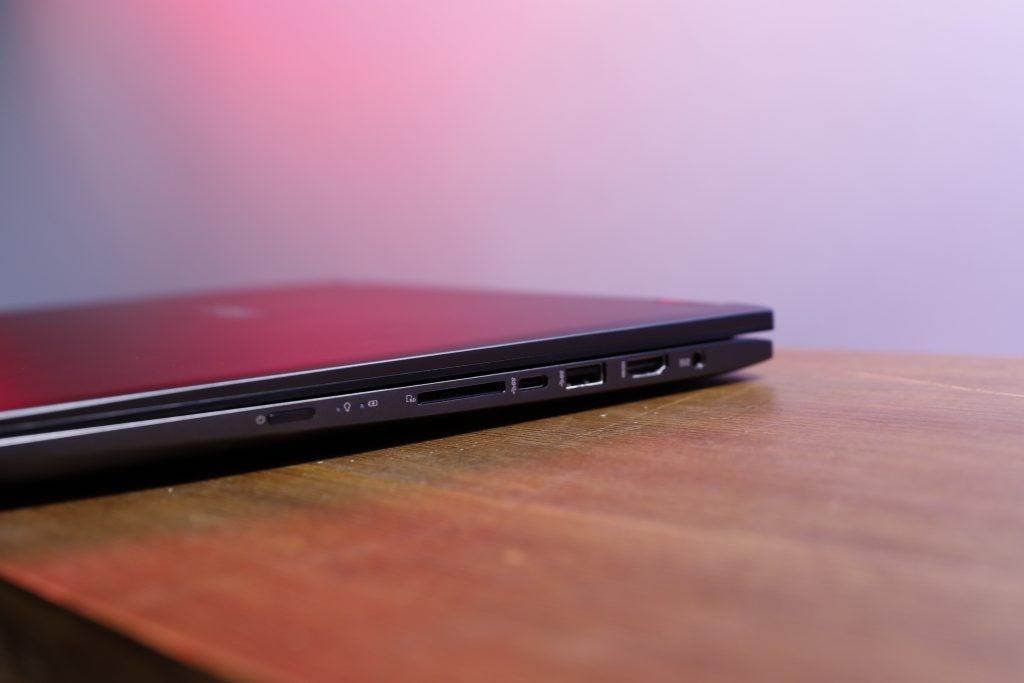 The Flip 15 comes with a set of speakers onboard, but I’d recommend you stick with headphones. The speakers here offer little bass and only average audio quality.

However, it does a decent job of capturing your voice with its Alexa-enabled microphones. The laptop will hear you from pretty much anywhere in an average-sized room and can be used to adjust settings, tinker with media playback, and ask all your usual Alexa-based questions.

Asus ZenBook Flip 15 keyboard and trackpad – The best and worst

One of my favourite things about the Asus ZenBook Flip 15 is its keyboard. Having been blown over by the quality of laptop keyboards from the likes of the HP Spectre x360 13 and the Surface Laptop 3 13 over recent months, I was super-impressed the Flip 15’s unit, which offers something different.

The ZenBook Flip 15 has one of the closest experiences to a desktop keyboard I’ve used in some time; it’s delightfully clicky with plenty of travel. The ZenBook Flip also comes equipped with, what it calls, an ErgoLift hinge. The hinge raises the keyboard up at an angle from the surface for a more ergonomically pleasing typing experience.

The only downside comes from the numerical keypad to the right, resulting in the letter keys being pushed awkwardly far over to the left. This is more a mild annoyance than a deal-breaker. 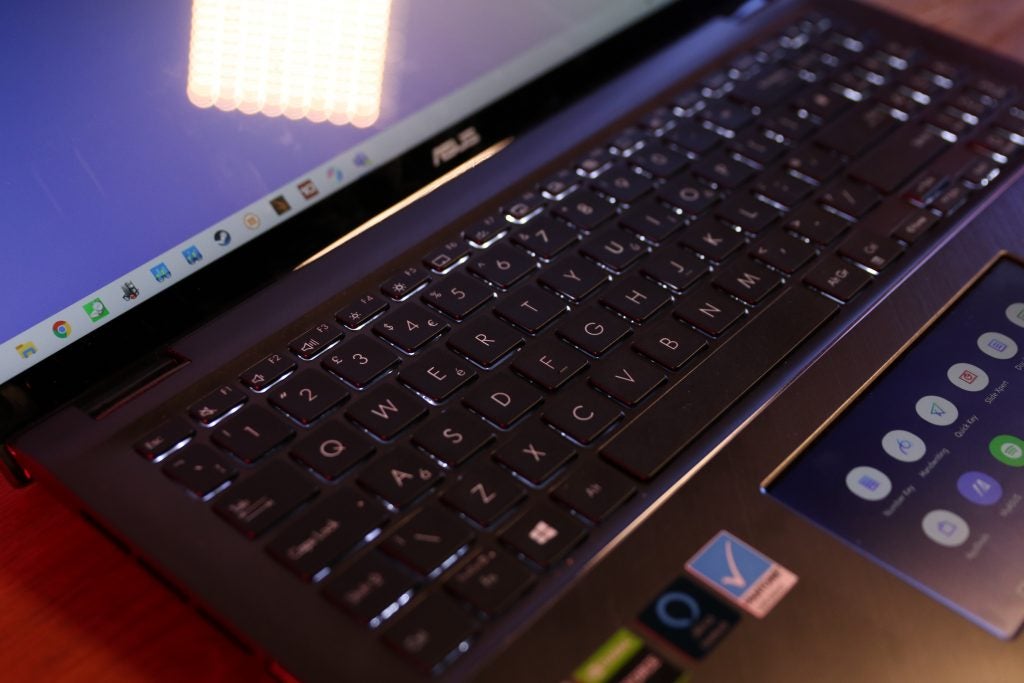 One of the most eye-catching features of the ZenBook Flip 15 is the ScreenPad – but its inclusion is a mistake in my opinion.

The primary benefit of the ScreenPad, says Asus, is as a second screen that offers quick access to useful tools and controls. The ScreenPad offers add-on apps for Excel, PowerPoint and Word – none of which I found “useful”. In fact, it was much easier to find the tool in question in the main window or use the keyboard shortcuts. 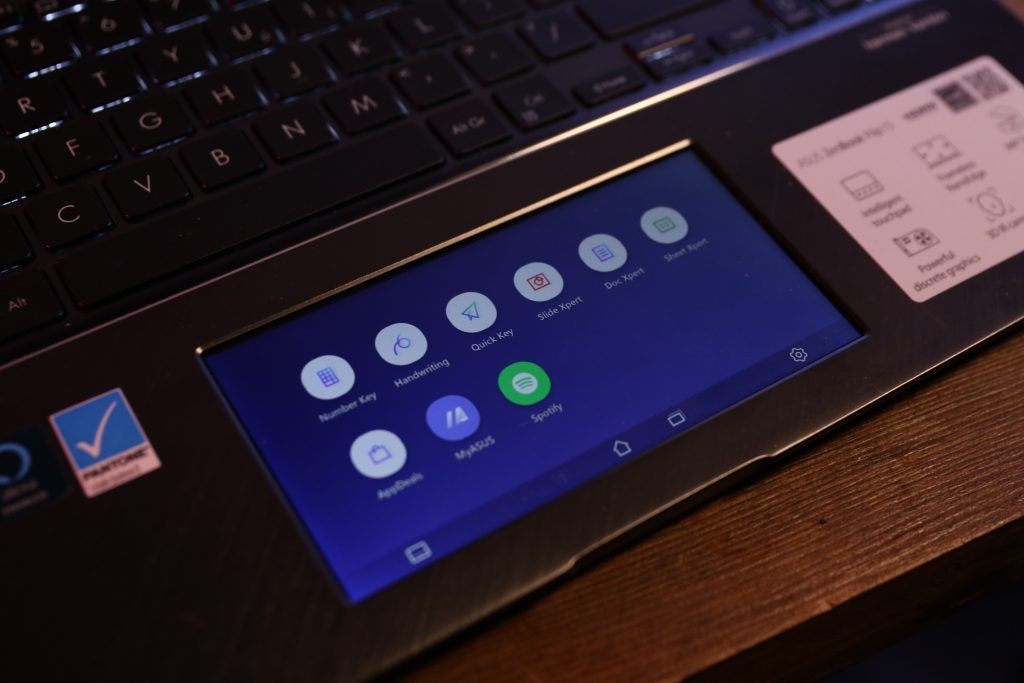 Even worse was trying to use the ScreenPad as a trackpad in general use. If you choose to switch between the app screen and the trackpad then it’s just a click away in the bottom-left corner. However, the trackpad is far deeper than is the norm, possibly as a necessity of the screen tech, leading to me clipping the sides with my finger.

I also found myself regularly brushing the ScreenPad with my palms. The issue would often lead to accidentally moving the mouse or, even worse, touching the close button for the trackpad then reopening the app window.

Thankfully, Asus offers a keyboard shortcut that allows you to turn the ScreenPad into a normal trackpad without the close button, but this obviously negates the ability to quickly use it alongside its other functions. You could use a separate mouse, using the shortcuts at will if that’s your bag, but I still feel the ScreenPad is a needless gimmick.

The Asus ZenBook Flip 15 comes with a 4K option and, in my experience, was decent enough; however, it falls a little short of the stunning displays from the likes of HP and Microsoft.

The display specs of this device are nothing to sniff at, though. The ZenBook Flip 15 gets fairly bright and it’s accurate. A 93.6% sRGB colour coverage and 1214:1 contrast ratio combine to ensure a top class display with punchy colours and a sharp picture. 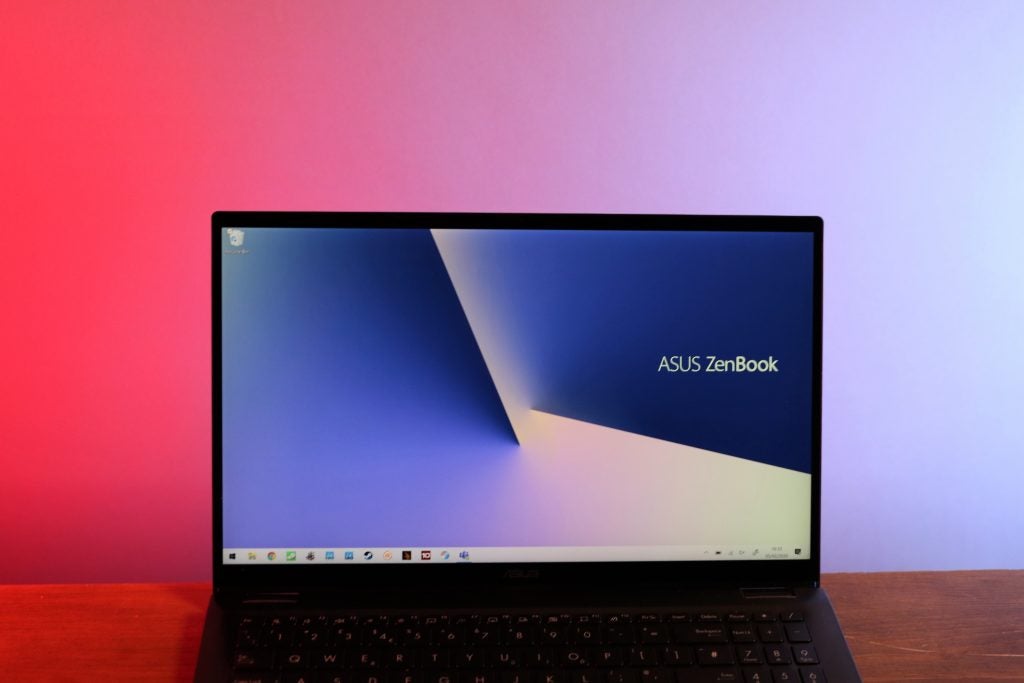 However, I find it unlikely that most consumers will use this chunky convertible as a “Netflix-machine” or for the type of editing/gaming work that reaps the benefits of a 4K panel.

4K can have a significant effect on battery life over 1080p (we haven’t had our hands on the Full HD version to test the difference exactly, but there will be one) – so you’re likely better off opting for the lower resolution instead.

The performance of the Asus ZenBook Flip 15 epitomises the main issue of the device: who is it for?

The laptop offers impressive productivity performance, with its 10th Gen Intel Comet Lake processor besting the performance of most modern ultrabooks, including the Surface Laptop 3 and Dell XPS 13 2-in-1.

The Razer Blade Stealth 13 is one of the few ultrabooks to show superior processing speeds, showing how impressive the ZenBook’s performance truly is. This will allow you to open lots of web browser tabs simultaneously while running rigorous applications without seeing any significant slowdown.

For graphical performance, the Nvidia GeForce GTX 1050 Max-Q onboard is really showing its age. Our 3DMark testing showed mixed results against the iGPU performance of the 10th Gen Intel Ice Lake chips. In reality, the ZenBook Flip 15 did perform slightly better during in-game benchmarks, but far from warrants the label “gaming-grade”.

If you want to game on this machine, you’ll be limited to fairly non-strenuous games such as Fortnite and Rocket League with a 1080p resolution. The same goes for editing; some Photoshop work and very light video-editing.

The Asus ZenBook Flip 15 offers some of the best battery life figures I’ve seen from a device with a 4K display. In our benchmark testing, the battery lasted just under seven hours, and the same played out for general use.

The size of the device facilitates the larger battery, although this also means the battery is having to power a 15-inch screen. As such, it remains impressive.

Our review model of the ZenBook Flip 15 was the 4K model, so you can expect a battery life increase of a few to several hours if you opt for the 1080p model. 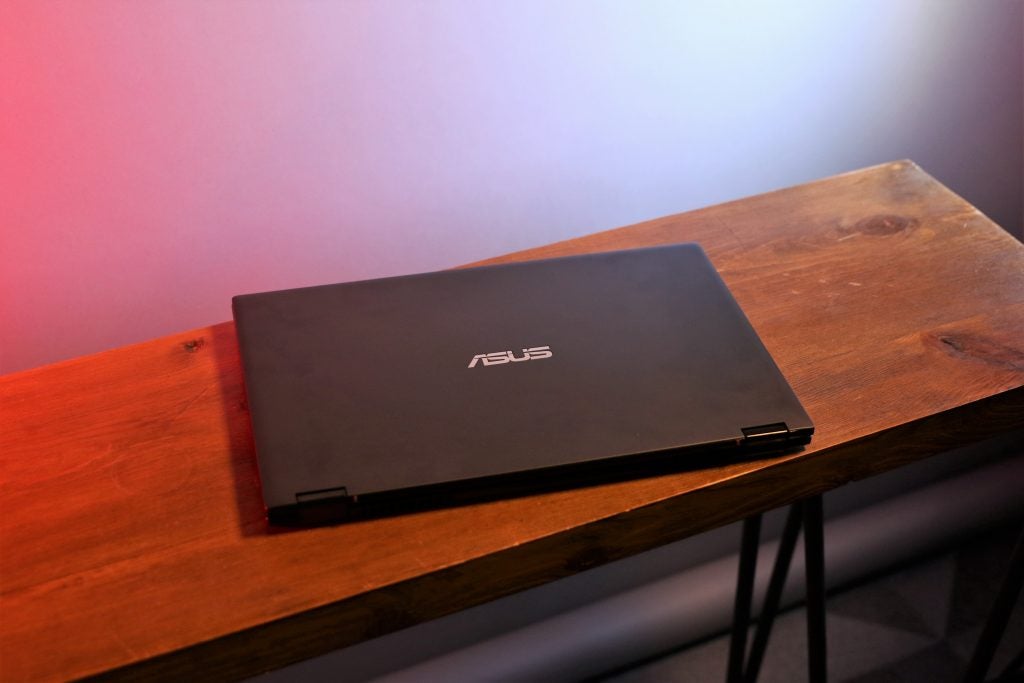 Should you buy the Asus ZenBook Flip 15?

It’s tough to determine the target audience for the Asus ZenBook Flip 15. If you want a large convertible for using around the house – allowing you to do some basic gaming, bash out some productivity tasks and watch some decent quality video – then this could be for you.

However, if you want a device for mainly gaming or editing video, then go for the Razer Blade 15 or HP Omen 15 instead. In fact, there are plenty of options around £1500. And if want a productivity powerhouse for casual or office use, then there are superior alternatives including the Dell XPS 15 2-in-1 and Surface Laptop 3 15.

The ZenBook Flip 15 is a confused combination of ideas that struggles to justify its price and finds itself in no man’s land. From gaming to productivity, there are plenty of devices on the market that succeed at the things the ZenBook Flip 15 only tries to do.