If you’re going to benefit from the second screen – whether it’s in creative applications or just by bumping useful tools downwards – then the Duo is worth considering. If not, then more traditional notebooks remain better due to the number of design compromises Asus has had to make

The Asus ZenBook Duo UX481 is one of the most distinctive laptops on the market – because it includes two screens rather than one.

The second screen sits above the keyboard and is a narrow touch panel. Asus reckons that this machine will be ideal for creatives and a whole host of other productivity tasks.

This model also includes a new Intel CPU and dedicated Nvidia graphics, and it costs a reasonable £1,499 and $1,499 – so can it compete with machines like the Dell XPS 13 and Apple MacBook Pro 2020?

The ZenBook Duo exterior is coated with brushed aluminium with a hint of navy blue, and the Asus ErgoLift hinge design is present – so opening the laptop raises the rear of the base to improve keyboard positioning and airflow.

Build quality is superb throughout. This machine will easily withstand frequent commutes. 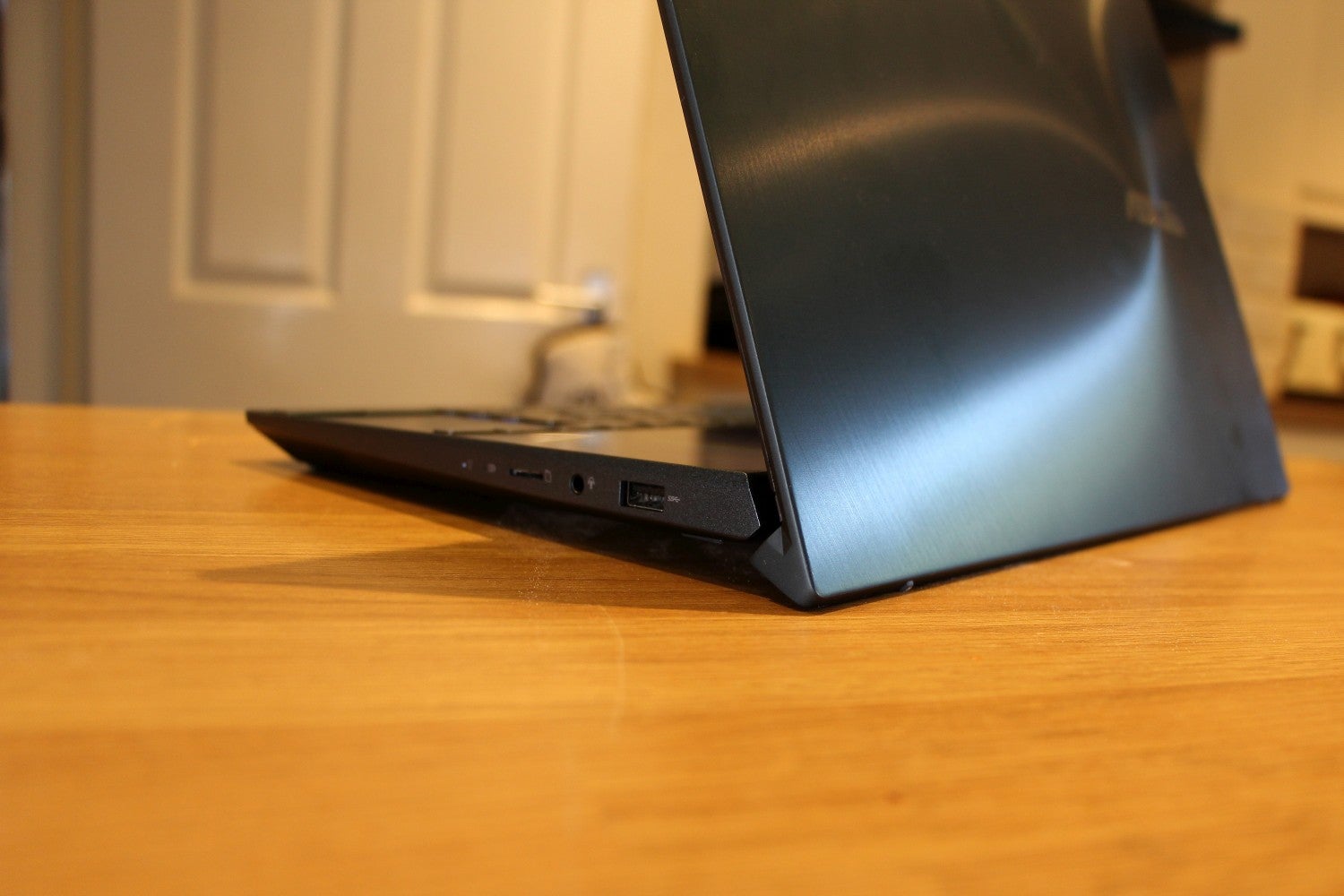 It’s undoubtedly a good-looking machine, but the dual-screen design has resulted in some compromises – the ZenBook’s size and weight, for instance.

The Duo’s 1.55kg heft and 19.9mm thickness are not prohibitive, but conventional rivals like the Dell XPS 13 and MacBook Pro 2020 are slimmer and lighter. They’re arguably better-looking too: the ZenBook has an abundance of visible seams. 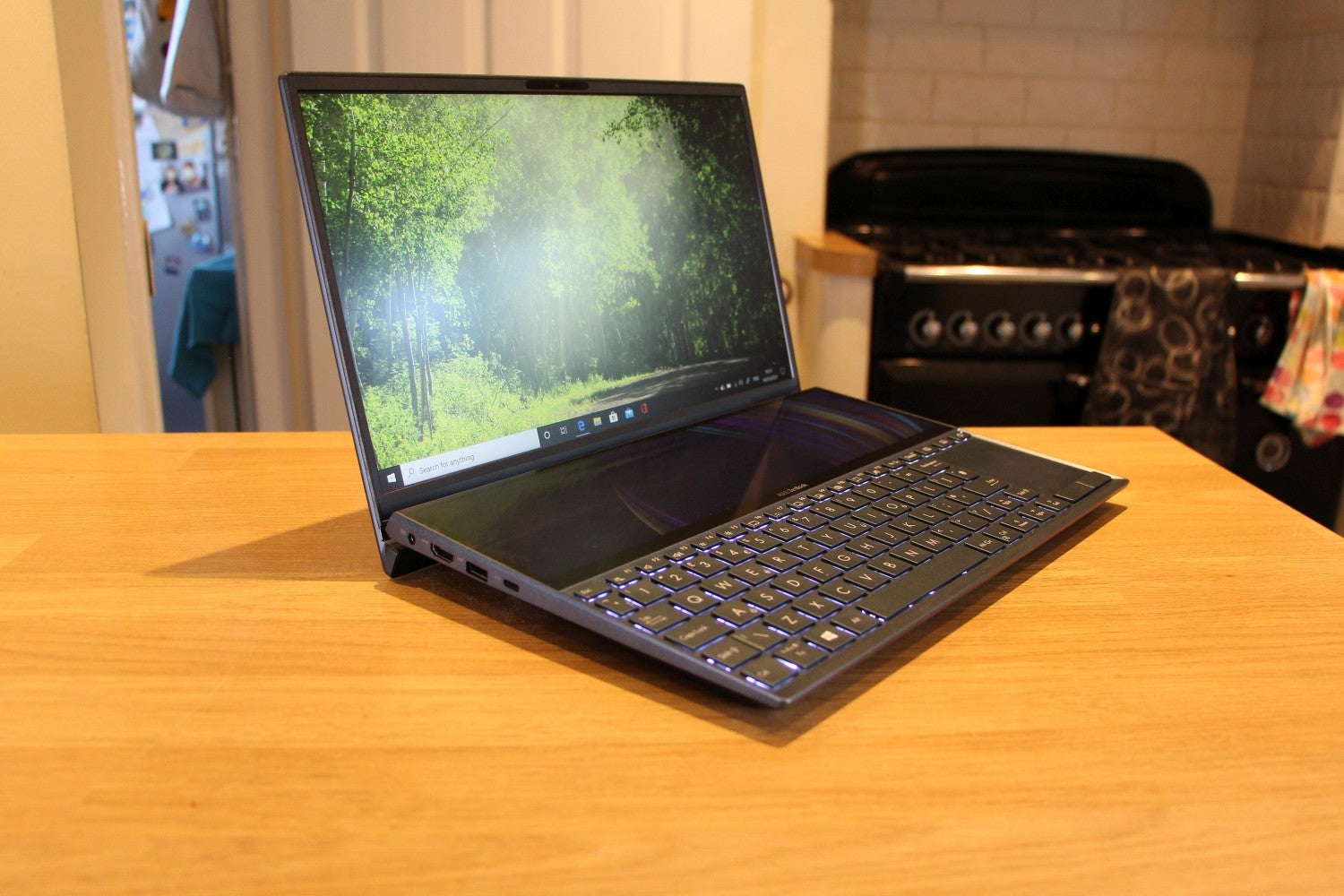 There are small design irritations throughout. The hinge mechanism is a little too stiff, which means this laptop can’t be opened with a finger. The rubber feet don’t provide much grip, and the ZenBook’s unusual form factor means this machine isn’t particularly comfortable if it’s used on a lap – there’s nowhere for your wrists to go.

The Asus has no Thunderbolt 3 port, its USB-C connection doesn’t charge, and there’s no full-size SD card slot. For creatives, that may prove a hindrance.

Instead, the Asus has two full-size USB 3.1 ports, a Type-C connection, an HDMI port and a microSD card slot. There’s also an IR-capable Windows Hello webcam for speedy log ins.

The ZenBook’s buttons are rock-solid, with a firm base, a decent amount of travel, and a pleasing snap – they’re crisp, fast and virtually the equal of those on Dell XPS 13 and Apple machines. 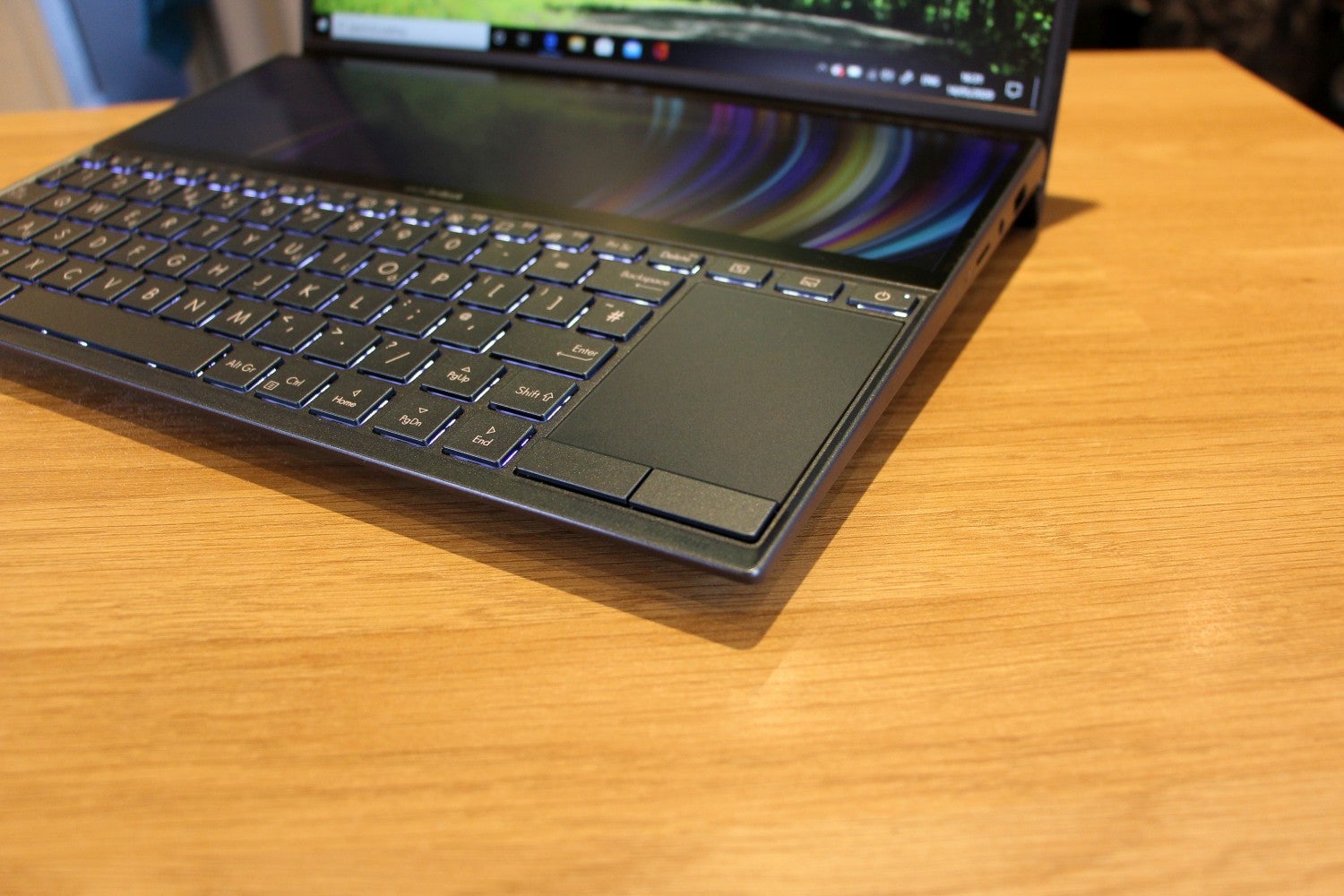 However, the ZenBook’s layout suffers because of its second screen. The buttons are shorter than most conventional laptop units, and they’re cramped. The cursor keys are not separated from the rest, the Shift buttons are tiny, and the Return key is single-height. There’s no number pad and no wrist-rest. These are things that you’ll get used to, but rivals don’t make all of these compromises.

The trackpad is very narrow, which restricts movement – you can’t get across the whole screen with one swipe. The buttons are fine, but conventional trackpads are more useful, and a USB mouse would be a great idea. There’s no fingerprint sensor, either.

The lower display is augmented by Asus’ ScreenPad Plus Launcher, which can group apps together for quick opening. There is also a handful of third-party app that is optimised for the second display – like Spotify, Dropbox and some of Adobe’s creative software.

The second display can be used to hold admin and communication tools if you’re working on the main screen, or timelines in audio and video software. Because it’s touch-sensitive, it’s also handy for note-taking – and Asus includes a stylus. The main display has good quality. Its Delta E of 0.97 and near-perfect colour temperature of 6580K ensure excellent colour accuracy, and the contrast ratio of 1035:1 is a solid result – high enough to provide good punch and depth.

The brightness level of 321 nits is reasonable, but only for indoor use. The main display handled 95.6% of the sRGB colour gamut, but couldn’t hit 70% in either the Adobe RGB or DCI-P3 gamuts.

Those results mean the Asus is extremely capable when it comes to mainstream work – but if you want to go beyond the sRGB gamut, it won’t handle it.

The secondary display is a little dimmer, but its black point is deeper – which means it has a punchier contrast ratio of 1465:1. Sadly, the panel’s lower angle means that viewing angles are poor, which leaves the display looking washed-out – effectively eliminating its better contrast. Its colour accuracy isn’t as good as the main panel either. That means it’s not useful for colour-sensitive work. The ZenBook also falls behind rivals in some areas. Laptops like the Dell and MacBook Pro have punchier screens, with bolder backlights, better contrast and wider gamut ability.

The Dell is available with a 4K panel for little more than the Asus, and the Apple’s 2560 x 1600 is sharper than the ZenBook’s panel.

The Asus has impressive speakers: they’re clear and crisp, with reasonable volume, detailed mid-range and high-end audio and even a moderate amount of bass. For casual music and media duties in smaller rooms, they’re great – although the MacBook Pro remains the king here.

It’s joined by 16GB of memory and a 512GB Intel SSD that delivers middling read and write speeds of 1858MB/s and 974MB/s – enough speed to keep Windows feeling snappy, but a fair distance behind the Dell and Apple SSDs. The specification is rounded out by WiFi 6 and Bluetooth 5. 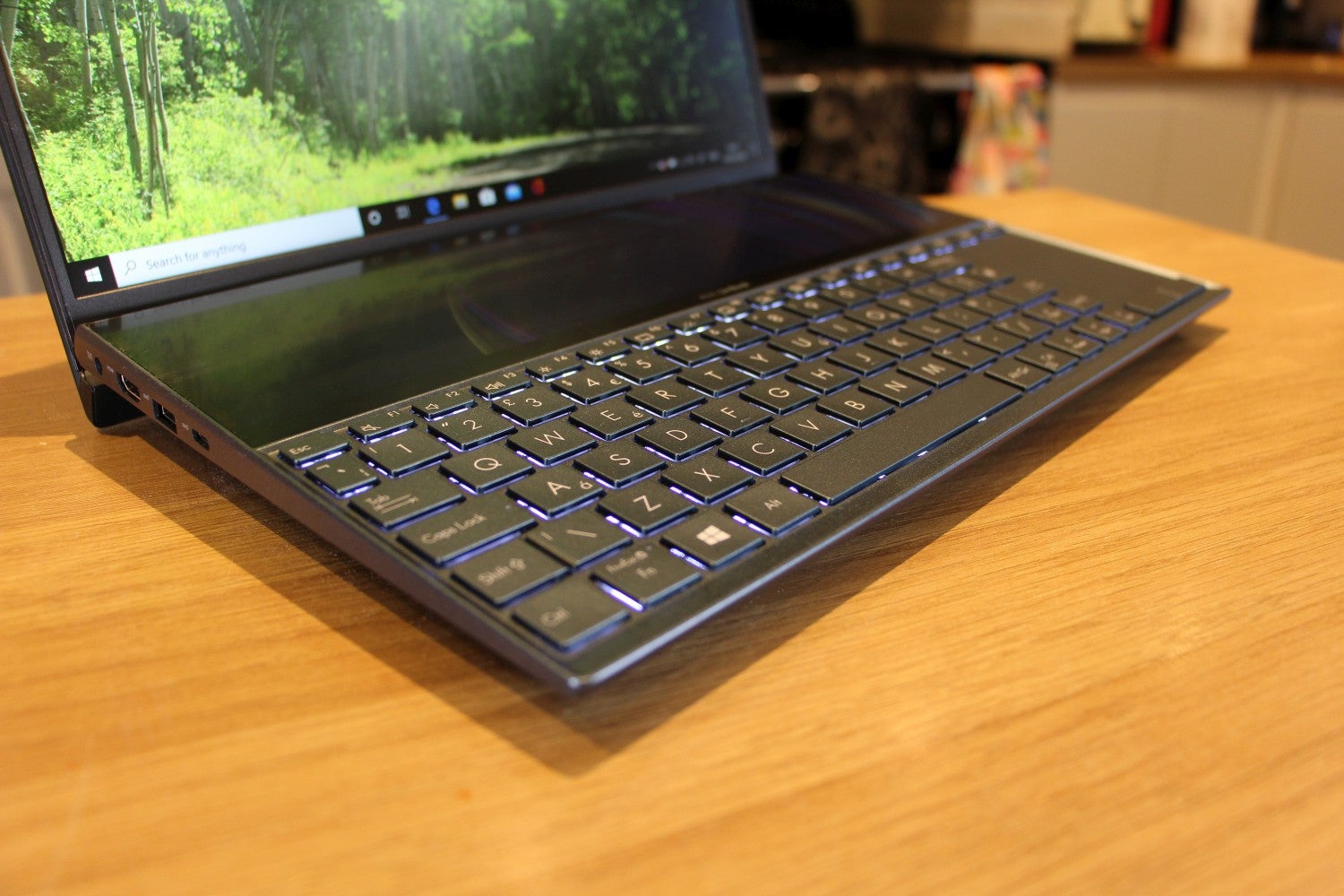 An Nvidia GeForce MX250 graphics core is included, but Asus has used the weaker of the two versions of that chip, with slower clock speeds and 2GB of memory rather than 4GB.

In Geekbench 5’s single- and multi-core tests, the Asus returned scores of 1290 and 4498. The former result is a little quicker than the Dell XPS 13, while the latter is a tad slower.

The Asus will handle Office and browser-based multi-tasking with no problem, and it’ll handle some photo-editing. When it comes to mainstream work tasks, this machine is easily capable. It’s a good thermal performer: even when stressed, fan noise is modest, and the exterior doesn’t become hot.

The Nvidia graphics core is not particularly impressive. Its 3DMark Fire Strike score of 2773 is barely ahead of the improved integrated Intel chip inside the Dell and Apple machines. Basic photo-editing tools will run reasonably well, but in terms of gaming, the Asus will only handle eSports titles like Fortnite and League of Legends. 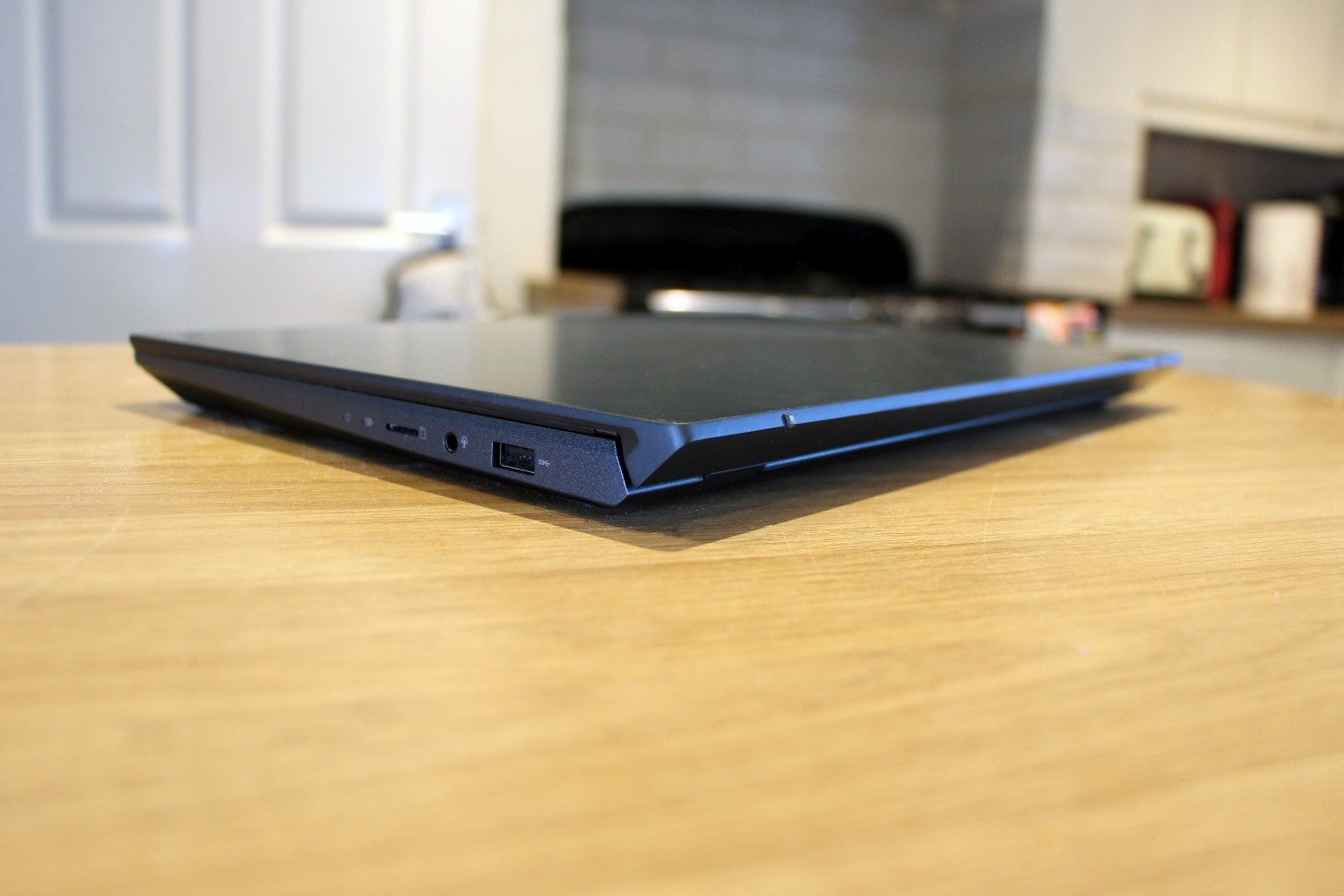 In our battery benchmark, the Asus lasted for eight hours and 23 minutes. That’s reasonable longevity and on par with most other Core i7-based slim laptops – it’s only a little behind the 1080p version of the Dell XPS 13.

You’ll be able to make it through most of the working day, especially if you’re careful with the components and screen brightness. Don’t expect the Duo to last through to a second day, though. 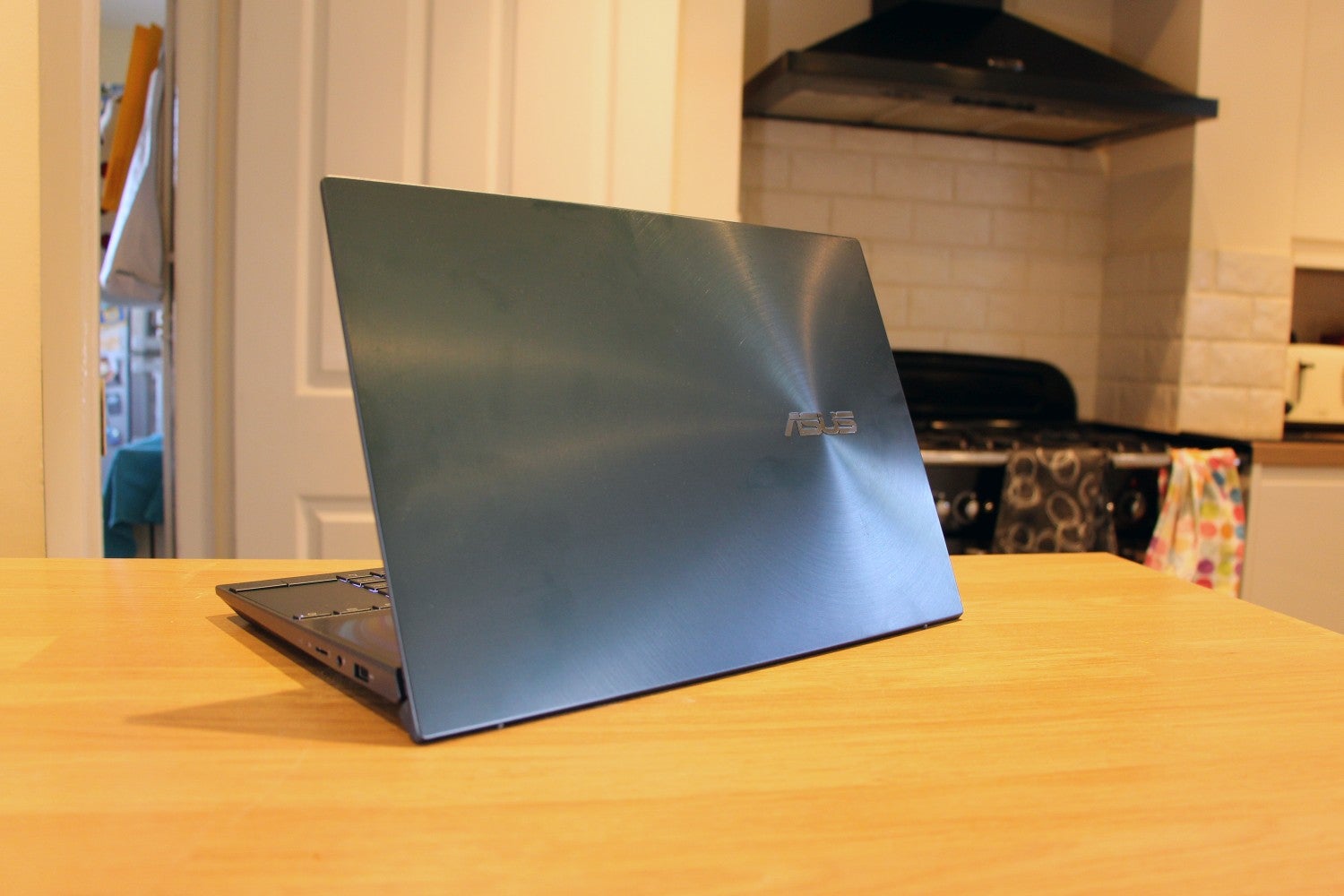 Should you buy the Asus ZenBook Duo?

Its main screen offers great quality for mainstream work, and the second screen has neat features alongside poor viewing angles. That said, it’s a touch panel, and if your workflow benefits from its extra real estate, then it could prove invaluable.

The Asus’ dual-screen design is innovative, and it’ll suit plenty of workflows – especially creative tasks. The ZenBook Duo bolsters its unique form factor with solid performance and battery life alongside robust build quality. However, the second screen hampers the keyboard and trackpad and makes this machine thicker and heavier than rivals. Only invest if you’re going to make use of both displays.