When it comes to all-in-one PCs, people want it all: power, performance and good looks. Fortunately, Asus has ticked all the right boxes with its 24-inch Zen AiO ZN240IC. With a touchscreen, plenty of USB ports, a super screen and great looks, this Windows 10 computer is capable of giving the best of the competition a run for its money.

Asus has built some of the most attractive laptops I’ve seen, and it’s bringing that same talent to the Zen AiO ZN240IC.

On first glance, it’s fair to say that Asus’ computer looks a little like the iMac. Rather than a simple copy, however, the AiO has a style and build that’s all its own. I’m a big fan of the aluminium stand, and the black bezels. The Zen doesn’t have the iMac’s wide “chin” at the bottom of the display, although its bezels are a little thicker all-round. I think it’s fair to call this one a draw.

The slim, tapered-edged design looks fantastic. From the front of the screen to the side of the edges is a svelte 11mm. Asus has used a metal-effect rear chassis that blends well with the stand, and you’d be hard-pushed to tell the difference between the metal and plastic parts by sight alone. 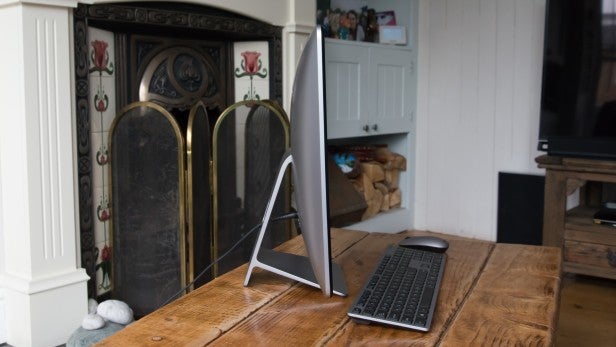 Around the back you’ll find all of the ports. They’re a little fiddly to reach, as you have to spin the entire computer around to get to them, but it’s good to see such an array on offer.

First up, there are two USB 3.1 ports (up to 10Gbit/secs) and four USB 3.0 ports. That’s plenty – and more than I’d usually see on an all-in-one. One USB port has to be used for the keyboard and mouse’s wireless receiver. Again, I find myself asking, why can’t manufacturers just use an integrated Bluetooth controller for their peripherals, especially since there’s Bluetooth 4.1 built-in? 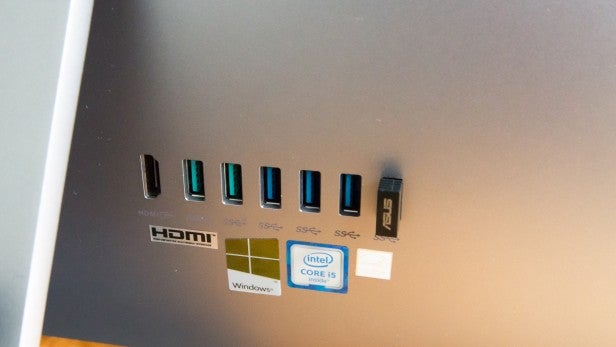 You also get a Gigabit Ethernet port (802.11ac Wi-Fi is built in as well), an SD card slot, headphone output and microphone output. If you want to hook up a second monitor, the HDMI output will come in handy.

Asus supplies a wireless keyboard and mouse set. The keyboard is full-size, with a numeric pad, which is good news since it means that all of the keys are the right size and in the correct position. It’s a pretty good keyboard, with each key offering plenty of travel and feedback. I found that I could type at speed without making errors. 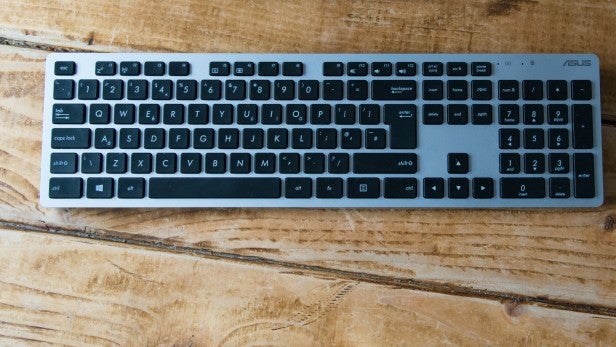 The mouse isn’t quite as good and is best described as functional. I found it a little dull-looking, and it is rather basic with just two buttons and a scroll wheel. For basic interaction with Windows the mouse is fine, but I prefer a unit with extra buttons, for moving backwards and forwards in a browser. For a machine designed with serious work in mind, such a basic mouse is a bit of a disappointment. 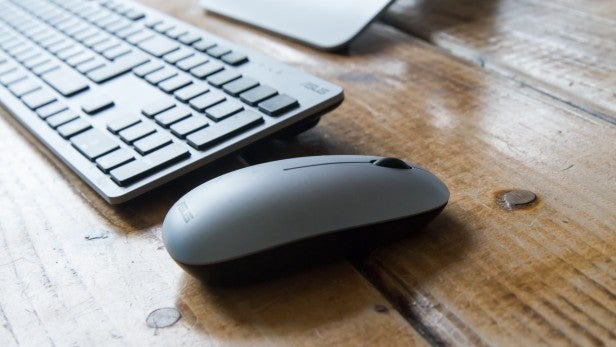 Asus has used a top-quality 1,920 x 1,080 glossy IPS. Despite its glossy coating, reflections were kept to a minimum and I didn’t have any problems viewing the display. Excellent viewing angles make it easy to see from anywhere.

I measured the screen as capable of producing 93.2% of the sRGB colour gamut, with a contrast ratio of 1,250:1 and a black level of just 0.19 nits. That’s impressive for a computer such as this, and the reality matches up to the measurements, with vibrant colours and deep blacks.

Asus has used a 10-point touchscreen, so you can control Windows 10 using touch alone if you prefer. Personally, I’d steer clear of using this format since it feels unnatural to lean across a desk; however, the screen is nice and responsive. 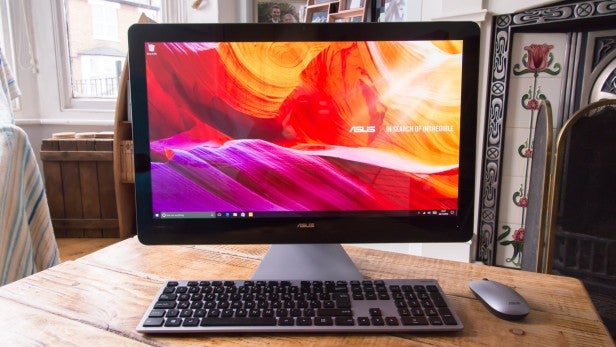 I’m not convinced, however. The sound is good enough for watching a bit of TV or a film, with dialogue sounding clear, but there isn’t a lot of bass or presence. If you want better sound, a set of decent headphones or external speakers would be a wise consideration.

A 1-megapixel camera sits at the top and middle of the all-in-one and is fine for the occasional video chat. There’s a built-in microphone that picked up my voice clearly enough, although it made everything sound a little echoey, as though recording in a small room. Again, it’s fine for video calls.

Asus has paired 8GB of RAM with a dual-core Intel Core i5-6200U processor, which runs at 2.3GHz and can Turbo Boost to 2.8GHz when there’s enough thermal headroom. This chip is usually seen inside ultra-slim laptops, so it doesn’t offer the same level of performance as high-end desktop processors.

That’s not to say that the Zen AiO is particularly slow; it has more than enough power for Windows, photo editing and some lighter video editing.

Running the usual benchmarks on this computer, it achieved scores of 5,452 in Geekbench and 2,785 in PCMark 8 Home. This is between 8 and 10% slower than the Lenovo IdeaCentre AIO 510S, which has a marginally faster Core i5-6500U processor.

When idle, there’s just a gentle humming noise emanating from the Zen AiO’s fan; more processor-intensive tasks spin it up to full speed, and it therefore becomes a little loud. In general, though, I didn’t find this PC particularly intrusive.

Having a low-power processor isn’t necessarily a problem, provided that the storage can keep up. Fortunately, Asus has fitted a 1TB mechanical hard disk and a 128GB SSD. The SSD is capable of 531.1MB/sec read speeds and 185.4MB/sec write speeds, which makes Windows quick to boot and applications responsive. The drives are formatted separately, so the SSD is best used for applications and Windows, with the mechanical hard disk for data storage.

With an integrated Intel HD Graphics 520 GPU anything other than light gaming is off the menu. Firing up Minecraft, I managed frame rates that hovered around the 60fps mark, but more demanding games are likely to be jerky.

Should I buy the Asus Zen AiO ZN240IC?

There aren’t a huge number of Windows all-in-one computers on the market, so the Asus Zen AiO ZN240IC immediately stands out. It’s well priced, includes high-quality components and is very responsive thanks to the included SSD.

The nearest competition at this price is the Lenovo IdeaCentre All-in-One 510S. This has a marginally faster processor, but only a mechanical hard disk making it feel a little sluggish; I’d rather pay £70 more for the Asus Zen AiO ZN240IC.

Attractive and stylish, with plenty of USB ports, decent 2D performance and an SSD, the Asus Zen AiO ZN240IC is a well-priced and balanced all-in-one.