This is one of the cheapest of Asus’ new
range of Z170 motherboards to still offer USB 3.1 support and other
core overclocking and enthusiast features. It lacks a few extras I’d have liked to have seen, but makes up for it with excellent raw performance.

The
Z170-A boasts a reasonably cohesive-looking design, but the chunky
white plastic shroud over the IO section isn’t to my taste and the board definitely looks a little busier than other models, such as the ASRock Z170
Extreme 4+ or Asus’ own, more expensive units.

Taking a closer look and it has plenty going for it, however, even if it lacks a few of our favourite features.

Importantly, this board will support all the latest
Intel Skylake processors and uses DDR4 RAM, unlike some entry-level
boards that still use DDR3. 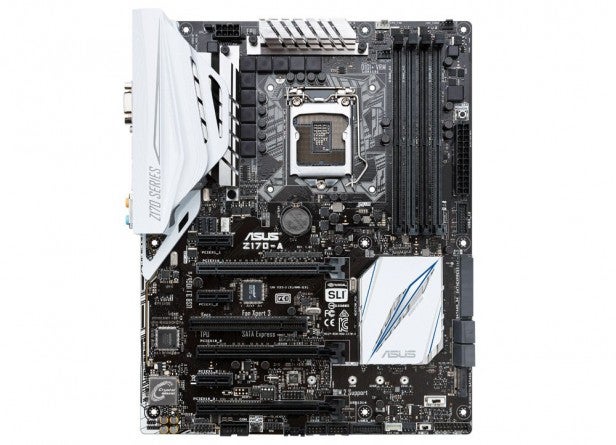 The Z170-A can also support up to three graphics cards, with 3-way CrossFire and quad-SLI (dual-GPU cards) options.

It
also includes an old PCI slot, which is useful for those who still
have old expansion cards they’d like to continue using with their new PC.
Asus has even managed to squeeze in three x1 PCI-E slots
for more modern expansion cards.

This is because the
board’s one M.2 SSD slot is positioned at the bottom of the board, below
the Z170 chip, rather than between the expansion cards like it is on most
boards. This is actually a more convenient position, so thumbs up to Asus for that one.

You
also receive a few other enthusiast touches, such as chunky clips on the
expansion slots to aid easy removal of the graphics card, single-sided RAM slot
clips and right-angled SATA ports. A right-angled SATA Express connector
is also included, along with an onboard power switch – although the latter is rather
small and somewhat inconveniently located.

Perhaps this board’s
main feature is the presence of USB 3.1. You get a total of
four ports, with two on the back panel (including one that’s Type-C) and
two via a header. Support exists for eight USB 3.0 ports, too:
four are located on the back panel, with the remaining available via headers. 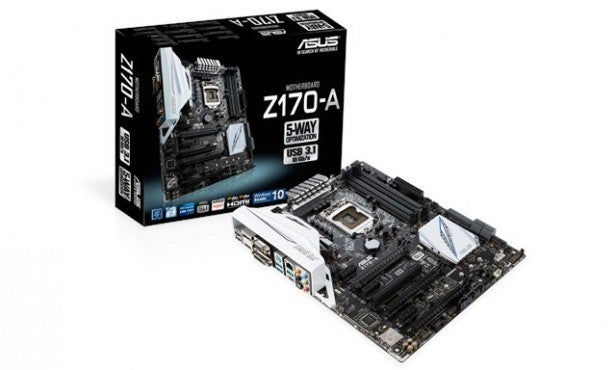 I’d have preferred to see a few more USB 3.0 ports on that
back panel – some boards offer eight – but instead you get four video
outputs, including VGA.

This adds to the versatility of the board, in that it can be
used with just about any peripherals, old or new. However, if you’ve already kitted out your PC
with a modern monitor, keyboard, mouse and other peripherals, this board wouldn’t make it on to the list of boards to consider. Plus, of
course, all those video outputs are redundant if you use a graphics card.

The Realtek ALC892 audio chip on this board is pretty basic. While it offers the full gamut of 8-channel surround sound, the quality of output is a noticeable step down from more expensive boards.

Maximum RAM speed is also rated at “only” 3,446MHz, while higher-end boards are rated to 3,800MHz. Likewise, the power circuitry is more basic and so won’t offer the stability that hardcore overclockers desire.

All
of which makes it somewhat surprising that baseline performance of the
Z170-A is actually very good. In our CPU and GPU benchmarks it was
second only to the more expensive Gigabyte Z170Z-Gaming 7, scoring
659 in Cinebench and 10,802 in 3DMark. This is with our test kit of an
Intel 6600K, an
Nvidia GeForce GTX 980 graphics card and 16GB of 2,666MHz DDR4 memory
along with a Samsung 850 Pro SSD.

However, it delivered this
level of performance by consuming a lot of power. In idle it consumed
the joint-highest amount of all the boards I’ve tested so far, at 40W (36W
is the lowest). Meanwhile, under load it jumped to 288W, compared to
272W for the Gigabyte Z170X-Gaming 7. 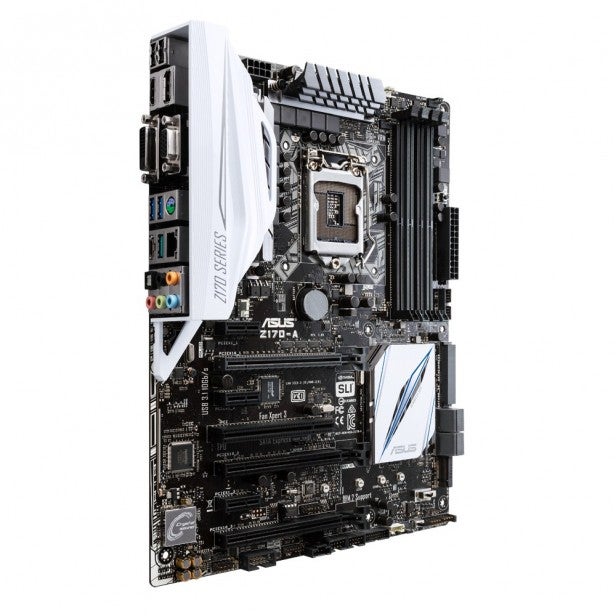 The
Z170-A is a bit of a jack of all trades and master of none. It offers
many of the core features an enthusiast/gamer would want, but skimps on a
higher-spec audio chip, has archaic video outputs and is missing a few niceties.

All of which mark it out as a board suited to more mundane upgrades – for business use, for example, where old monitors and expansion cards are common.

However, the issue here is that it’s around £20 more expensive than true entry-level boards that offer all the same core features.

That said, the presence of USB 3.1 and Type-C means it truly does offer complete coverage of features old and new, so for those users requiring VGA, PCI and USB 3.1, the Asus Z170-A fits the bill perfectly.

Plus, it does actually offer class-leading base-line performance, without the need for overclocking, even if that is at the expense of slightly higher power consumption.

The Asus Z170-A isn’t the obvious option for most enthusiasts who keep up with the latest technologies. Nor is it the clear choice for those simply looking to spend the least amount of money on a basic Z170 system. However, it offers an intriguing middle ground that could be perfect for some.