Asus may be associated in most people’s minds with notebooks, motherboards, graphics cards and the like but it does have its fingers in an awful lot of other pies. Its networking portfolio is getting larger by the day and the WL-550gE is the latest to join an ever expanding range of wireless routers.


Coming in at a shade under £70 it looks good value, although bear in mind that it doesn’t have an integrated ADSL modem. Instead, it has a separate 10/100BaseTX Ethernet WAN port which is designed to accept an external cable or ADSL modem or it can be placed on a LAN where Internet access is provided by a gateway device. If you’re looking for ADSL2/2+ support you’ll need to source a suitable modem with an Ethernet port. Asus offers the AAM6010EV, although we couldn’t find anyone that stocked it. Alternately, you could go for the Linksys ADSL2MUE, which is available and costs around £30.


The router also offers a standard four-port Fast Ethernet switch and comes equipped with a wireless access point that supports 802.11b/g operations. It employs a Broadcom B5352E 54g chip which implements its BroadRange technology that aims to offer a 300 per cent improvement in range over standard 802.11g operations. This isn’t new, having first been launched by Broadcom over a year ago but it offers improved digital signal processing capabilities that increase the device’s ability to send wireless transmissions over greater distances. Naturally, to make the most of this you’ll need to use a compliant notebook adapter and for testing we were supplied with Asus’ WL-100GE PC Card which costs a mere £29 excluding VAT. 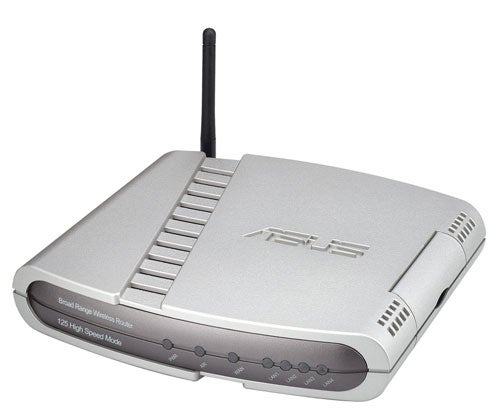 Physically, the router is a chunky desktop unit with a couple of small pull-out hinges at the base so it can stand vertically. Build quality is reasonably good and we did notice after testing it for a week that, unlike many routers, it runs quite cool. For testing we used a simple ActionTec intelligent modem connected to the WAN port and found installation only takes a few minutes. After connecting a PC to one of the LAN ports you can point a web browser at the router’s default IP address and fire up a simple quick setup wizard. There are a few choices for the Internet connection and we opted for the first, which enabled the WAN port to take its IP address and DNS details from the attached modem.

The setup routine also takes you through wireless encryption configuration and we strongly recommend sorting security out straight away as the access point cannot be switched off. During setup you can select none, 64/128-bit WEP or WPA but once you’re into the main web interface there’s a lot more to play with. For WPA the router supports both TKIP and AES and you can use an external RADIUS server for user account authentication. Access controls are good as MAC address lists can be used to allow wireless access or alternatively you use the list to reject those same addresses. Under the wireless advanced settings you can play with the power output of the access point and disable SSID broadcasting. WDS (wireless router distribution) is also supported enabling it to connect to other specified access points for increased range and it can work in WDS or hybrid modes as well. 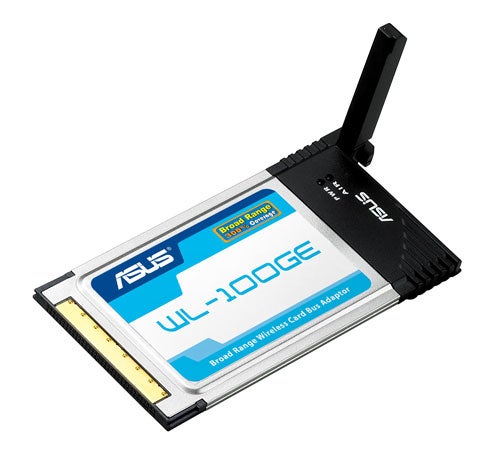 Overall wireless performance wasn’t as good as the current cop of MIMO routers. Using a Fujitsu Siemens LifeBook equipped with the WL-100GE card we ran the open source Iometer over open and WPA-TKIP encrypted links. At one metre, Iometer reported 29.6Mb/sec for an open link and 28.5Mb/sec with WPA enforced. The BroadRange technology did have an impact though as moving the notebook down a floor and putting three bricks walls in the way saw these speeds only drop to 26.5Mb/sec and 24.4Mb/sec respectively. We also tried these tests with Asus’ proprietary AfterBurner feature enabled but saw no appreciable difference.

The router provides an SPI firewall which is enabled by default and will provide all the protection most users will require. However, you can use the virtual DMZ option to allow one IP address on the LAN to circumvent the firewall allowing full access to it from the Internet. Services such as web, mail and FTP servers can be opened up to the Internet by creating virtual server entries for each one and filters can also be applied for LAN to WAN traffic.


A useful feature is bandwidth management as you can create different policies for inbound and outbound traffic. These can be applied to a specific IP address or a port and each policy enforces the chosen bandwidth limitations for each one. URL filtering simply involves applying a list of keywords to web page URLs which will be blocked if there’s a match. Unlike the domain blocking option provided by D-Link’s DSL-G624M you can’t block access to all web sites except those listed.


Asus delivers a well built router with a good range of features and security options for wired and wireless connections but wireless speeds won’t be worrying MIMO equipped routers and you’ll need to factor in the cost of a broadband modem.