The W3J is the second of two notebooks from Asus that have caught my eye recently. The first was the W5J, which packed a lot of power into a relatively diminutive shell thanks to a 2GHz Core Duo processor. The W5J was also noticeable for its white shell and fetching blue lights, designed to appeal to those in touch with their feminine side, or indeed females.


The W3J adds some more bulk, upping the weight from 1.6Kg to 2Kg with the standard battery and 2.2Kg with the extended battery, but for that you gain an extra two inches of diagonal screen size, (14in instead of 12in) and a far more powerful graphics chipset, an ATI Mobility Radeon X1600, which makes games a realistic option. Asus touts it as gaming on the go it and I think it would be churlish to disagree. The concept is pretty similar to the Zepto notebook that Spode reviewed here, though that machine featured an nVidia GeForce Go 7600 chip. 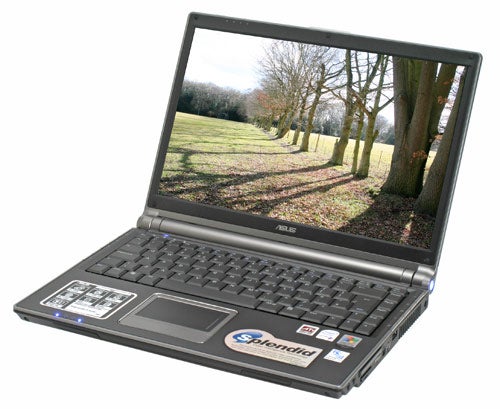 Before you get to the specs though the first thing that will impress about the A3J is the appearance. With its brushed metal exterior and metallic grey and silver finish, it’s almost as good looking as the sleekest Sonys. There are also some neat touches that make it look a bit special. Down the sides of the notebook, alongside the keyboard is a row of hotkeys that are flush with the metal edging, – it looks good. The ubiquitous blue lights are also put to good use, with indicators for AC power, battery power, hard disk activity and Wi-Fi. The coolest touch though is the power button with a glowing blue backlight that’s built into the hinge on the right hand side.


The trackpad that sits below the keyboard is surrounded in by a greyish silver, but I’m not sure about that polka dot covering. There’s also an indicator on the right hand side for the scroll bar. The mouse buttons are unusual is that it looks like a single button but it works as normal depending on where you press. 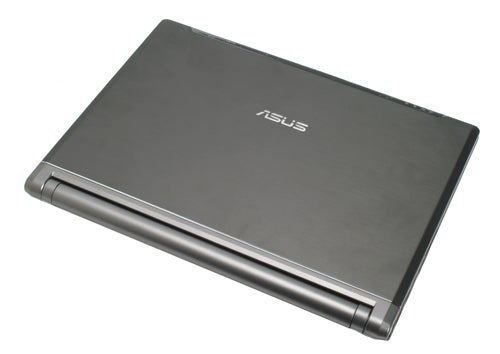 The relatively compact nature of the notebook means that the keys are quite close together but everything is logically placed. The Enter key is well sized, as is the backspace key, while the Page Up and Page Down keys are laid in a line down the side. The arrow keys are squeezed in underneath the Enter key, while the Function key is at the bottom far left. The keyboard has a pleasingly firm base but the keys themselves have a slight rattle to them – I’d rate it as good but not superb.

The top right of the flush hot keys switches power profiles – Game, High Performance, Super Performance, Quiet Office and Presentation are available and these automatically adjust the power profiles. Below this, the button turns Bluetooth and off. Next is one that adjusts screen modes, Theater, Vivid Soft, Gamma Correction. The next two are for Wi-Fi and Touch Pad Enable/Disable.


Moving to the left hand side we find controls for the DVD player – Stop, Start, Pause. While these flush controls are cool I did find that I pressed them inadvertently when I went to pick up the notebook.

Looking to the right hand side of the machine, you find the power supply connector and next to this is the CPU heatsink output and it certainly puts out a fair amount of hot air.


Along from this is one of the three USB 2.0 ports and next to this is the S-Video out. After this you’ll find the FireWire port – though it’s only a 4-pin variety, which could be inconvenient if you don’t have a 4-pin to 6-pin cable to hand. After this you’ll find an Express Card slot, a new type of slot that replaces PC Card, and a memory card slot that can accept SD card and Memory stick. There’s also an infra-red port tucked in there, though I can’t think why you’d need it if you have Bluetooth. The Bluetooth chipset supports the latest 2.0 standard giving greater bandwidth and range. Bearing the Centrino branding, Wi-Fi is also built-in, pretty much standard these days. 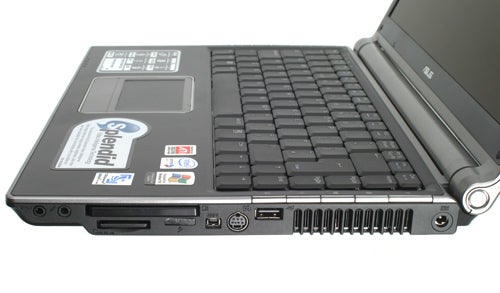 On the left you’ll find the other two USB 2.0 ports, a D-Sub cable and Ethernet and modem ports. The sum total of three USB ports is actually slightly disappointing and I would have liked to have seen four. One of the reasons there is only three might be that Asus is squeezed for space as there are no ports at the rear. This is because of the battery forms part of the hinge. It’s a cool effect but it does mean that only the sides can be used for connectivity.


The screen quality is good when viewed direct on, and looks good but it does suffer from poor viewing angles, especially vertically. If you’re not sitting directly in front of the screen, you won’t get a great experience. If you are though, you’ll be alright and things are bright, clear and colourful.

Despite being a small machine there’s plenty of power in the machine thanks to an Intel Centrino Duo T2400 – a 1.83GHz dual-core processor. You can also get the machine with faster or slower processors, but this one is on the price to performance sweet spot. It’s backed up by two sticks of 512MB DDR2- 1GB is a decent amount but you’ll be limited if you need to add more as both slots are taken. 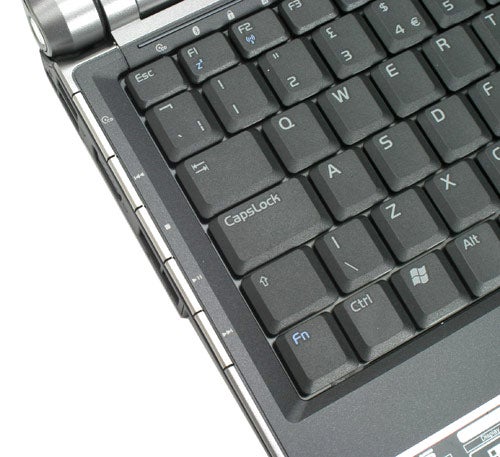 The X1600 chip is listed at having 512MB but in fact this only when HyperMemory kicks in – there’s actually only 256MB of dedicated memory on the chip, but it will intelligently and dynamically grab up to 512MB when it needs it. It might not have the cache of the latest desktops chips or be as fast as the Mobility Radeon X1800, but you can still play games on the X1600. I tried out Call of Duty 2, at native resolution and found it to be quite smooth and very playable though this was without anti-aliasing or anisotropic filtering, and in demanding games it will struggle with these enabled.


The faster CPU helps it outstrip the Zepto by a significant amount in SYSmark 2002 and in PC Mark 05. Though we only were able to run 3DMark 06, we know that the GeForce 7600 Go is a faster chip and indeed the Zepto outperforms the Asus here. But you can definitely play games on this machine.


It also does better than on battery life than the Zepto, lasting for two and three quarter hours – and that’s on its 4-cell battery. We didn’t get the 8-cell battery to test but Asus claims up to four hours. 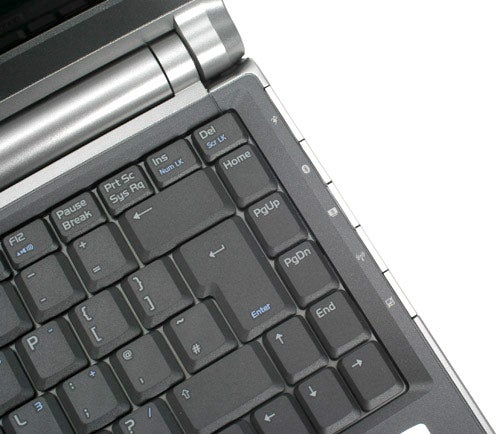 Overall then, it’s faster than the Zepto, except in games, but has superior battery life, has a larger hard disk and is quite a bit lighter, especially with the standard battery. It’s also better looking. All this means it justifies the higher asking price over the admittedly bargain-tastic Zepto.


If you want a perfectly practical, attractive, highly portable machine that packs a punch for work and play then the Asus W3J should be high on your short list.