What is the Asus VivoMini VC66R?

One of the main reasons for people not wanting to invest in a desktop PC is because of the associated bulk. However, computers don’t have to be so huge, as the tiny Asus VivoMini VC66R shows. Despite its small size, the VivoMini doesn’t sacrifice power and can do more than your average laptop. Available only on a build-to-order basis, the VC66R will hopefully be on mainstream sale later in the year.

I’ve not yet given the VivoMini VC66R a rating due to its lack of a price in the UK. When Asus announces a price, I’ll revisit this review to deliver my final verdict.

I love the VivoMini VC66R: it’s modern-looking, minimalist and very small (177 x 153 x 74mm). The case has a subtle dimpling effect, with a pattern of squares. It helps break up the case, giving it a fresher look. 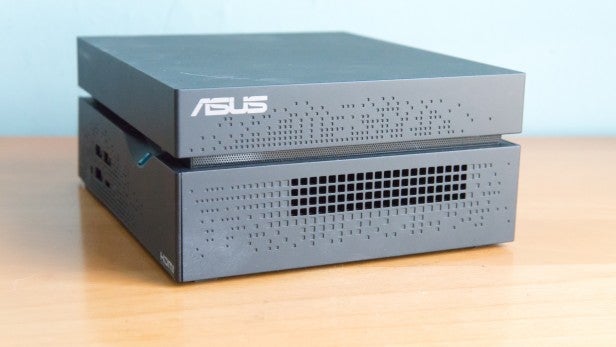 Although the VivoMini VC66R is compact, the case has everything that you could want on it. At the front, there are two USB 2.0 ports, a USB 3.0 port and a USB 3.1 Type-C port, with a headphone jack rounding off the options. At the rear, there are two further USB 3.0 ports, Gigabit Ethernet (802.11ac Wi-Fi is built-in), and an SDXC card reader. Arguably, the card reader would be better at the front of the PC, where it’s easier to reach. That said, the VC66R is so small and light that it’s easy enough to turn around. 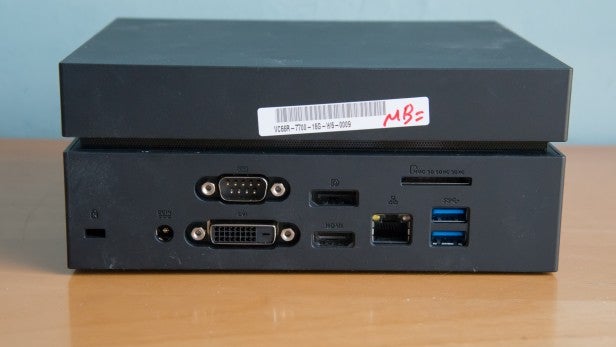 The rear houses the power input, provided by an external power brick. While an internal power supply can be neater, this would require a larger case, which wouldn’t be ideal. There are HDMI, DisplayPort and DVI graphics outputs. As the VivoMini VC66R uses integrated Intel graphics, only the DisplayPort output supports 4K displays at 60Hz; the HDMI 1.4 output can only do 4K at 24Hz. Finally, there’s a serial COM port on the back, should this be the kind of thing that you need.

Flip over the case and pop out the four rubber feet, and the entire top lifts off to reveal the dual 2.5-inch drive bays mounted on a metal plate. Remove one more screw, and you can get into the main guts of the PC. You need to be careful with the cables and connectors, but from here you can get at the two RAM slots and the M.2 slot. It’s nice to have this level of upgradability on so small a PC; traditionally, small-form-factor models are sealed and therefore aren’t user upgradable. 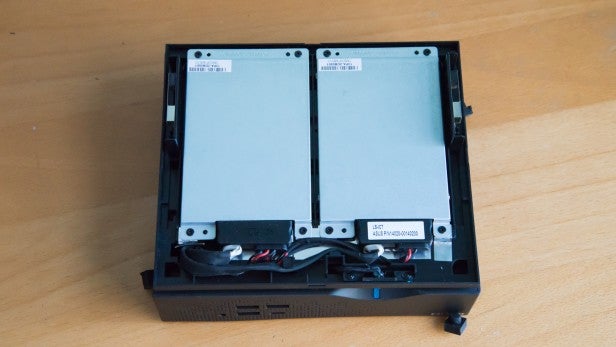 A lot of small computers use low-power processors for cooling reasons. I’m pleased to say that Asus has decided to fit a full, desktop-spec Intel processor. My sample was shipped with an Intel Kaby Lake, 7th-gen Core i7-7700 CPU. This has a base clock of 3.6GHz, although it can Turbo Boost to 4.2GHz when there’s enough thermal headroom. That’s really meaty for an ultra-compact PC. Even the larger HP Pavilion Wave could only manage a “T”-suffix processor, which denotes a lower-power version of Intel’s desktop chips.

Combined with 16GB of RAM, the VC66R is a veritable powerhouse, scoring an excellent 14,354 in the Geekbench 4 Multi-core test. I’ve seen faster results from larger Core i7 systems, since these typically have better cooling, allowing for greater and more sustained Turbo Boost. However, the VC66R can hardly be described as slow; it wipes the floor with systems that use low-power CPUs. 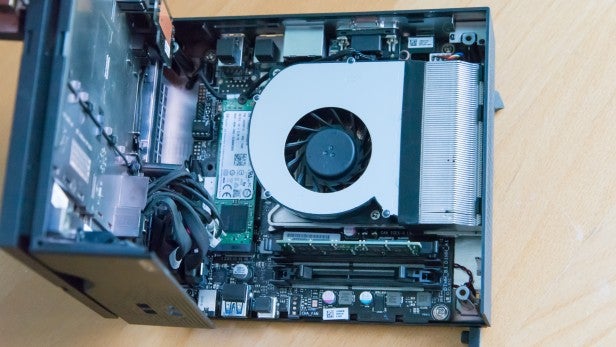 There’s no room for a graphics card, so the system is powered by the processor’s integrated Intel HD Graphics 630 chip. This is more than fine for day-to-day desktop use in Windows 10, but the VC66R certainly isn’t a gaming system. Running Minecraft full-screen at a resolution of 1080p, I saw smooth frame rates of between 51fps and 60fps. Anything more demanding won’t run so well.

Inside the case, Asus has room for two 2.5-inch hard disks (or SSDs), and there’s an M.2 slot for faster storage. The model I reviewed shipped with a 128GB M.2 SATA SSD and a 1TB hard disk. I measured the M.2 SSD with a read speed of 562.8MB/sec and a write speed of 135.5MB/sec. That’s rather average for an SSD, giving decent enough boot speeds. Ideally, I’d like to see Asus install an NVMe-based M.2 SSD with a slightly larger capacity: a minimum of 256GB feels about right for a modern computer. Having a hard disk for storage makes sense, and helps keep the price of the computer down.

Compact computers can be noisy, with fans working overtime to keep the insides cool. Fortunately, this isn’t the case with the VivoMini VC66R. When idle, the fans gently hum away, with the PC registering 45.5dB when measured from 15cm. During more processor-intensive tasks fan speed picks up, with the PC becoming considerably louder; at its peak I measured it at 62dB.

Offering better performance than a laptop, plus the option to upgrade, the Asus VivoMini VC66R is a top computer. Confirmed pricing isn’t yet available – it will depend on the specific combination of hardware that goes on sale. However, prices for a Core i3 model with 4GB of RAM will start at around £500; expect to pay a chunk more for a Core i7 and an SSD. 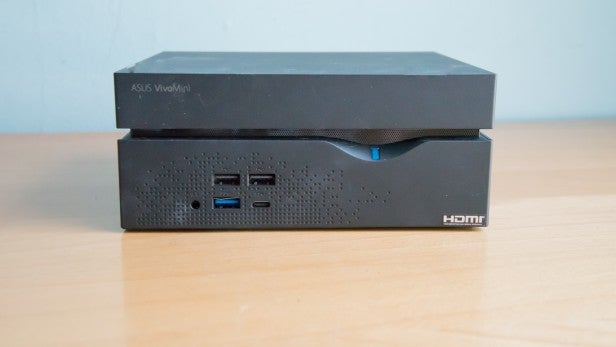 Even so, that seems like comparatively good value, and this is one computer that I’d love to see on general sale.