The Asus E203NA is just about as cheap a laptop as you can buy. Available for under £200, it sports an 11-inch screen and a weight of less than 1kg. Alongside a near-10-hour battery life, this makes it potentially ideal as a go-anywhere laptop.

However, a super-slow processor and built-in storage makes it frustrating to use.

This laptop definitely benefits from a smart design. The various white finishes – pearlescent, plain matte and speckled metallic – combine well together and the dark-grey bezel round the screen completes the look nicely.

Its relatively slim form factor also helps here – it measures 16.9mm thick – and it weighs in at just 0.98kg, yet there’s a sturdiness to its build. Meanwhile, its footprint is just 286 x 193.3mm. 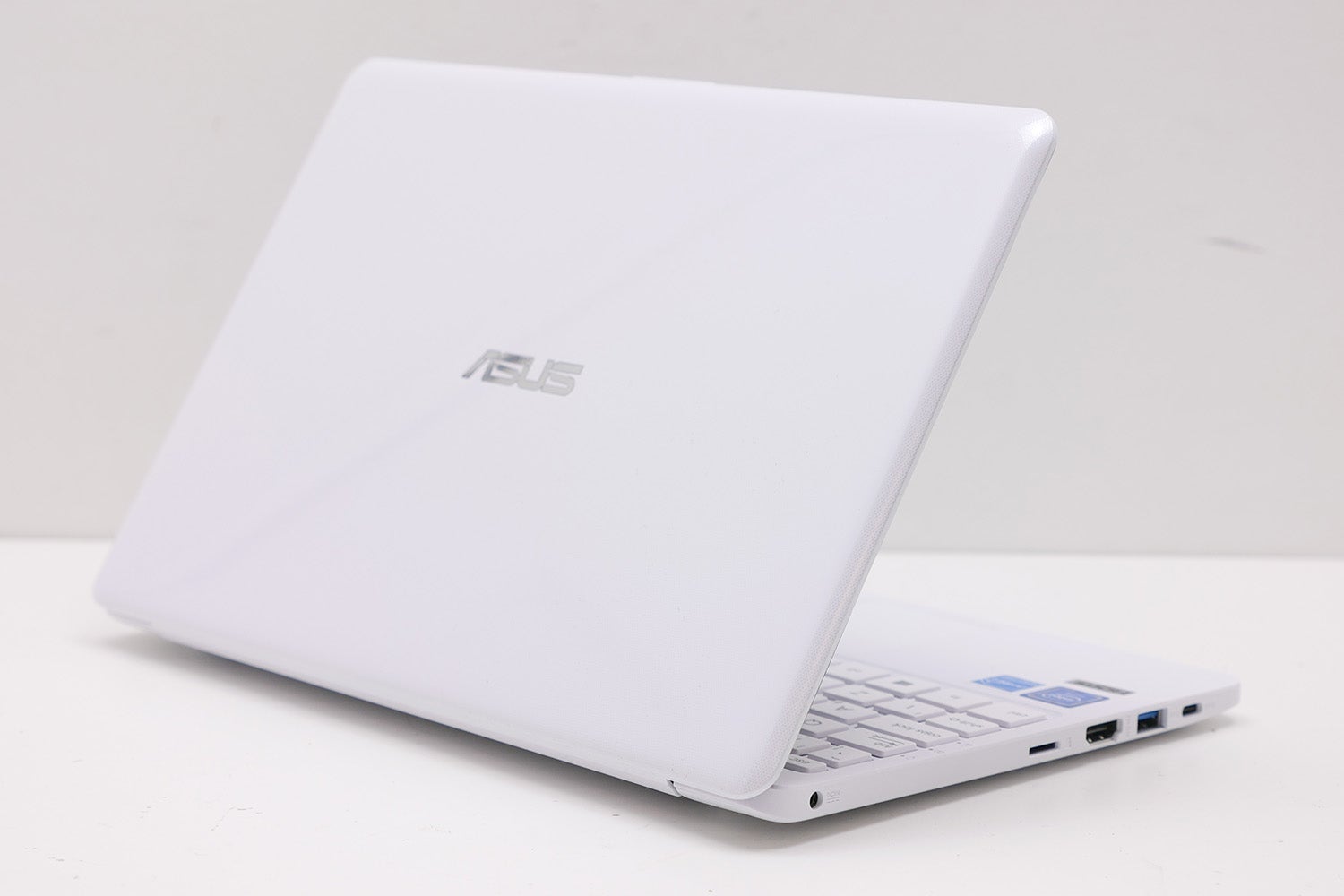 One of the reasons it’s able to maintain such a slim build is that the CPU inside is so low-power that it doesn’t require a fan to cool it. This comes with the added benefit of a lack of fan noise and unsightly ventilation holes on the laptop’s underside.

Surprisingly for such a basic laptop, there are decent selection of ports. You get two USB 3.0 (one on each side), a microSD, a USB Type-C, headphone jack and even an HDMI port; the idea that someone would hook this laptop up to a TV or monitor seems pretty unlikely to me, but at least the option’s there.

There are few other extras, too: a webcam sits above the screen and a trio of LEDs to the left of the keyboard indicate power charging and Caps Lock. 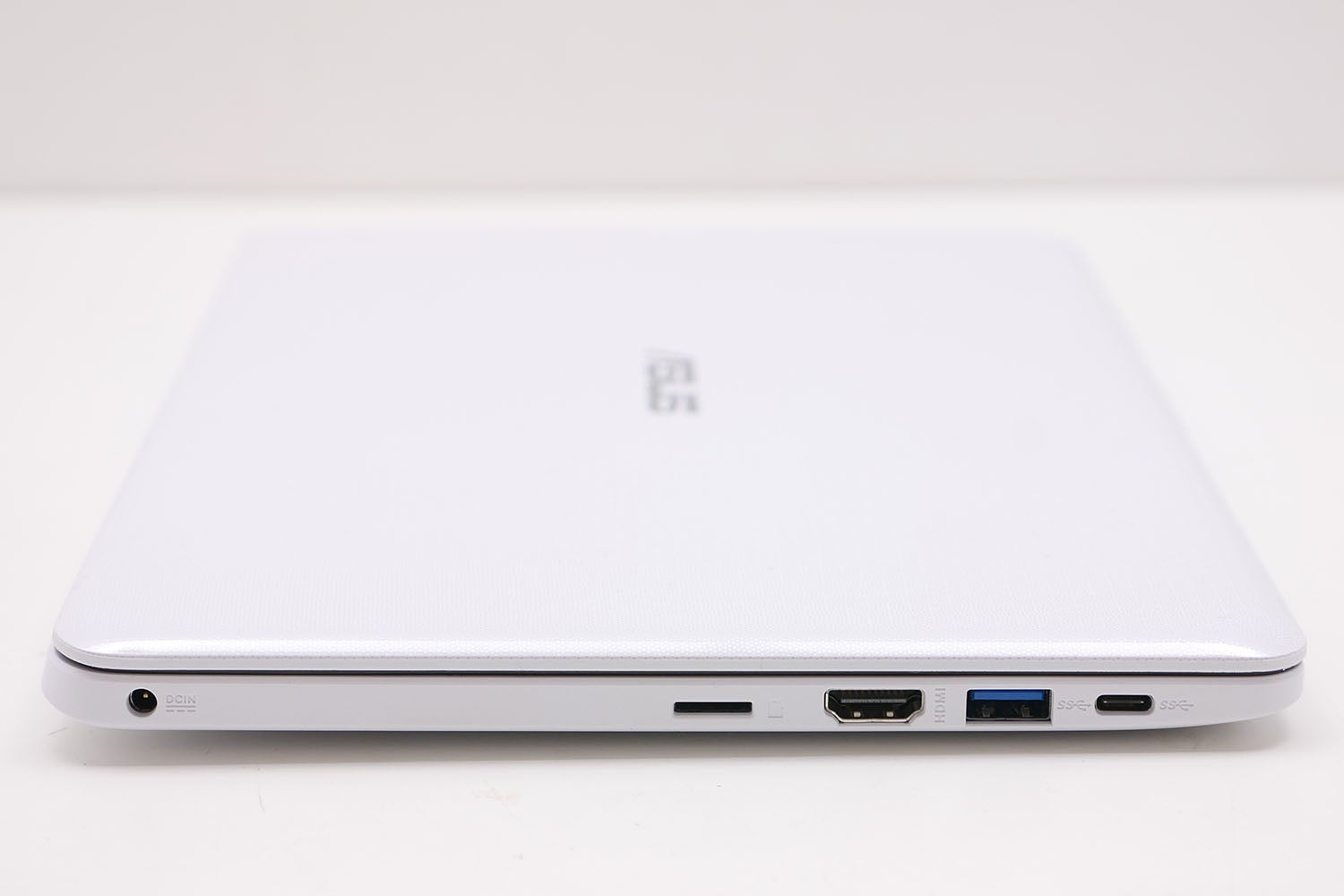 The keyboard on this laptop is perfectly passable. With the device being a compact size, the keyboard is a touch smaller than usual but it doesn’t feel particularly cramped. In the UK, the model features a UK layout and it’s great to see that the secondary function of the cursor keys are the PgUp/PgDn/Home/End keys. This is a really convenient and intuitive place to put them – some manufacturers put them elsewhere and use the cursor keys for volume and brightness adjustment.

Inevitably the key action is nowhere near as refined as that found on more expensive keyboards, but there’s enough of a noticeable break that you know by feel when a key has been pressed. There’s quite a lot of flex in the centre of the keyboard, but not enough to cause the annoying trampoline effect experienced on some laptops. 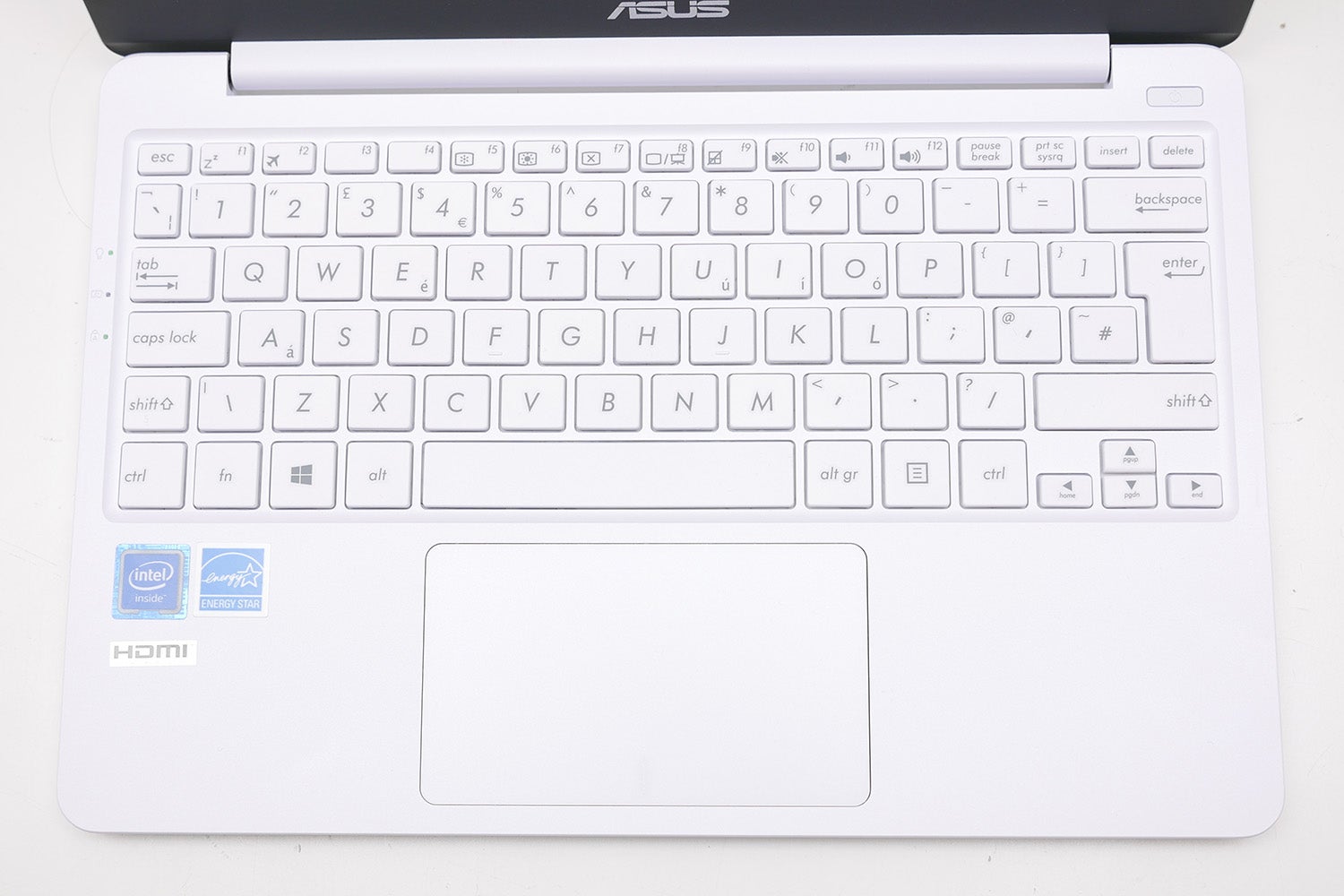 As for the trackpad, it’s okay. Tracking is reasonably accurate and it’s a decent size. However, the click action isn’t anything to shout about – the surface tends to drag beneath your fingers and the whole unit has a slightly wobbliness to it. Considering the price of this laptop, however, this feels like a reasonable compromise.

Another area of clear cost-cutting is the webcam. Those on the majority of laptops aren’t exactly DSLR quality, but here there’s a reduction in resolution from the typical 720p to just 480p (640 x 480). The result is a particularly low-detail, slightly washed-out looking image. You’ll recognise the person at the other end of your Skype call, but only just.

As for the laptop’s speakers, they just about pass muster. At lower volumes the lack of bass and general shrillness isn’t too off-putting, but crank them up and it’s a fairly unpleasant listen. They’re fine for catching up on your favourite vlogger, but you wouldn’t want to watch a movie or listen to music. Again, this is typical of a laptop at this price – but the step up in basic clarity you’ll get by spending £300-£400 is clear. 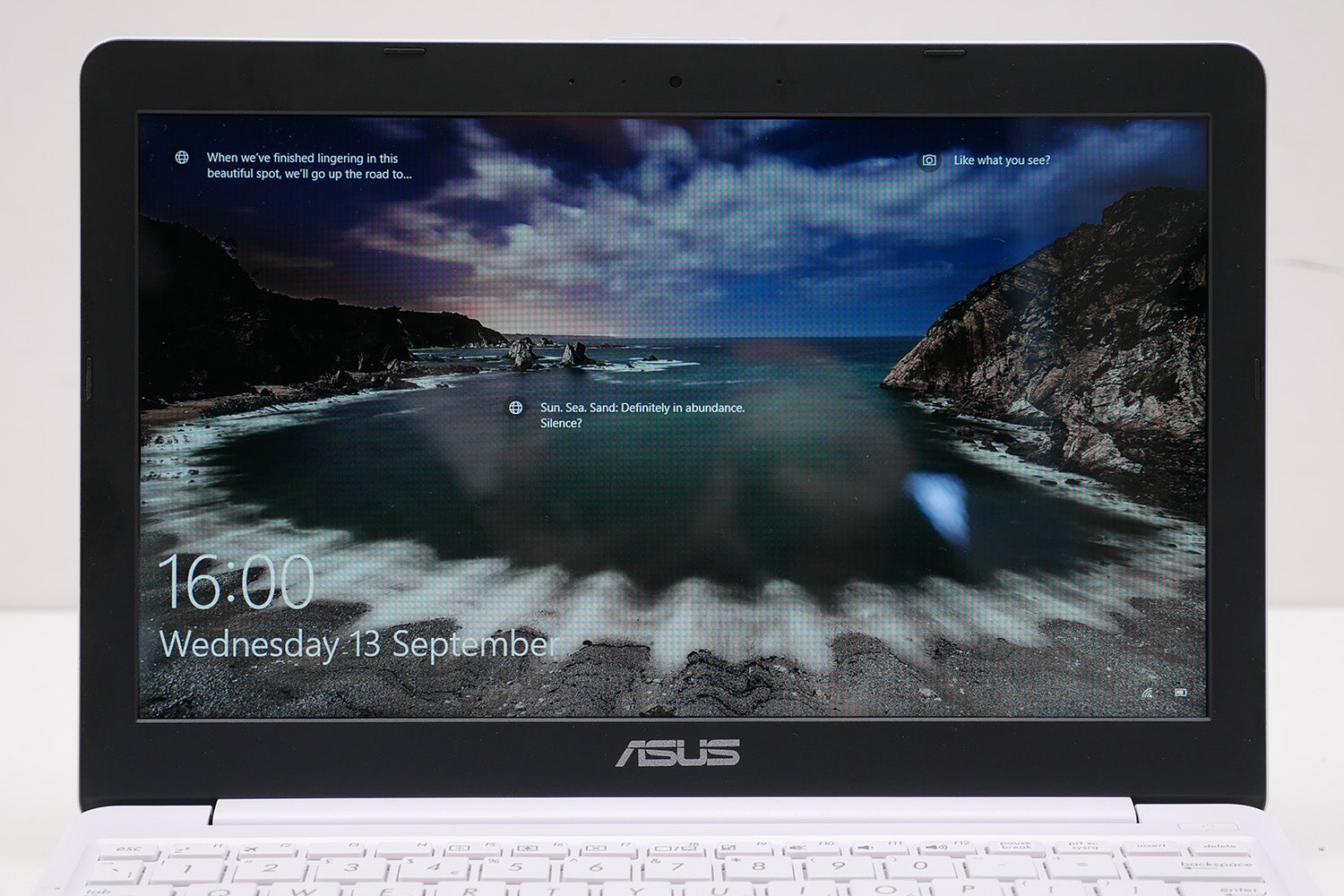 At 11 inches across, this laptop’s screen is ideally matched by its resolution of 1366 x 768 pixels. Anymore would look too small; any lower would be impractical. That said, it’s still a fairly compact resolution that will mean some websites and apps feel cramped. 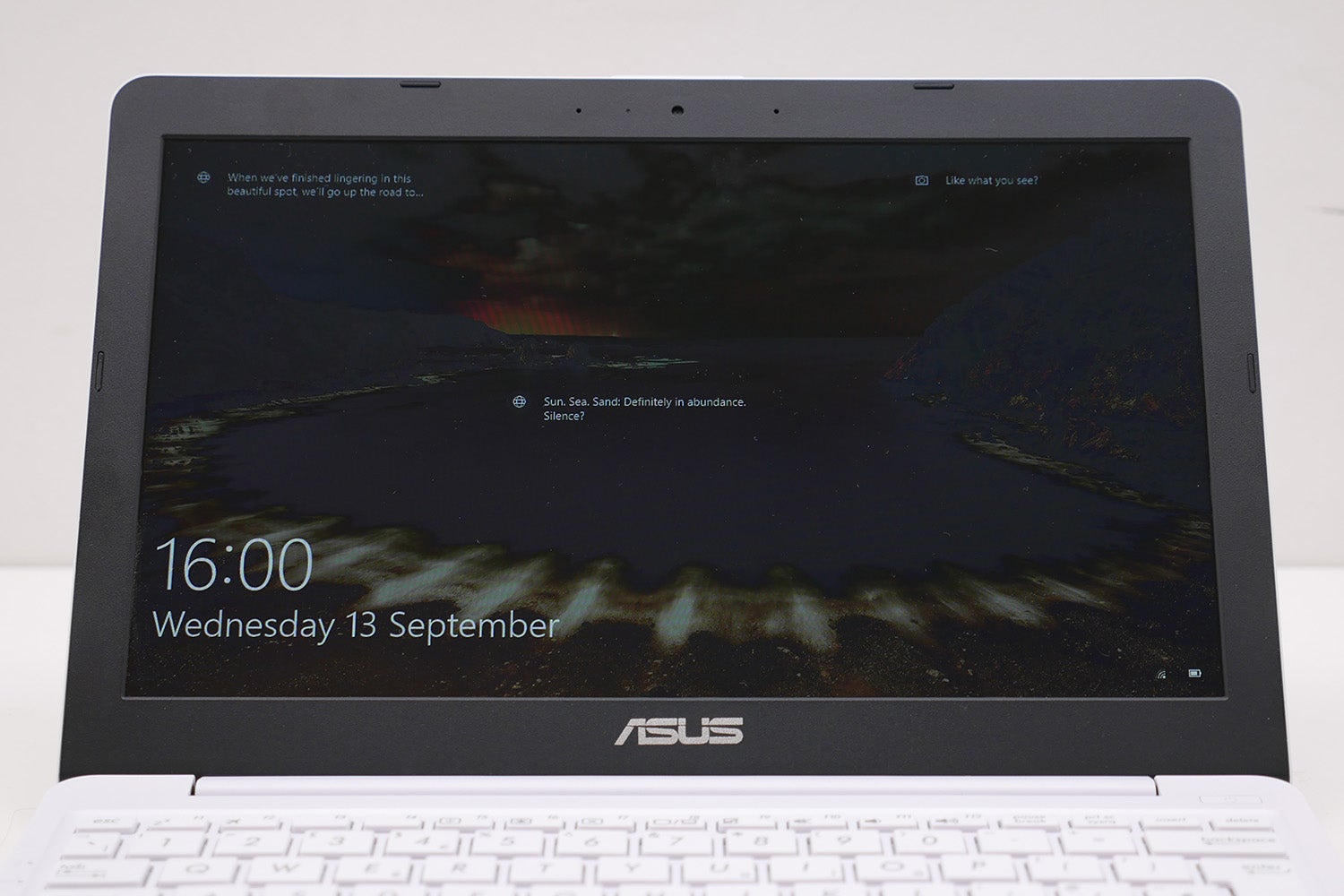 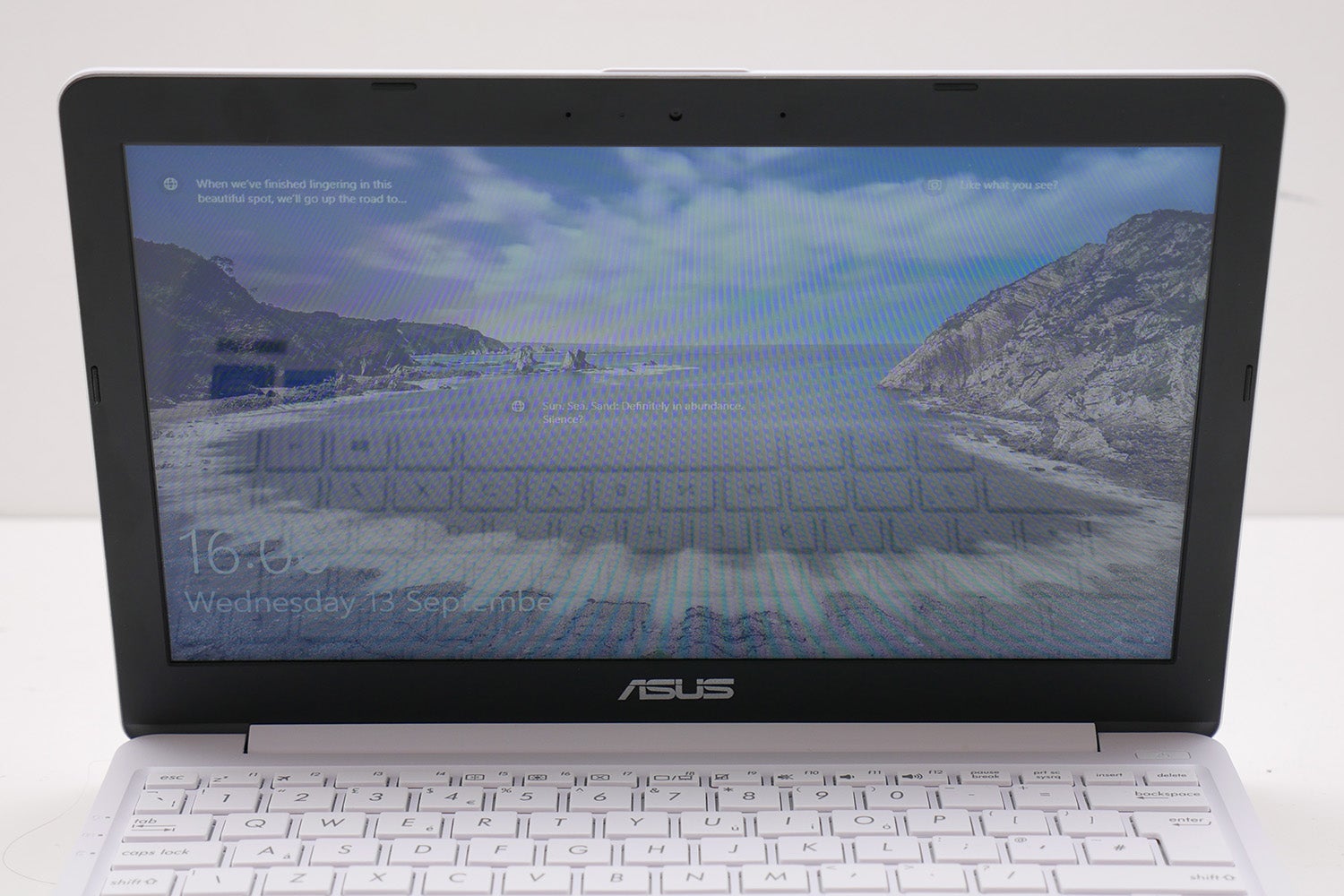 Poor viewing angles mean the screen looks very different as you move it up and down.

Otherwise, its image quality is basic but not awful. Colour balance is okay and it doesn’t look too washed out. However, with a contrast of just 487:1 and sRGB colour space coverage of 63.4%, it certainly isn’t spectacular. Plus, since it’s a basic TN panel, viewing angles are poor, with a noticeable shift in the balance of colours and contrast as you move the screen forward and back.

Suffice to say, this is a screen that’s useful mainly for basic work and play, not creating or watching.