At IFA 2012, Asus started a new tablet family. The Asus Vivo Tab and Vivo Tab RT are the Windows 8 counterparts to the Android-powered Transformer mob, and they offer several design improvements over those popular keyboard’ed tablets, and some more besides. The Asus Vivo Tab RT is the cheaper of the bunch, powered by a Tegra 3 processor rather than an Intel chip and sporting a smaller screen. 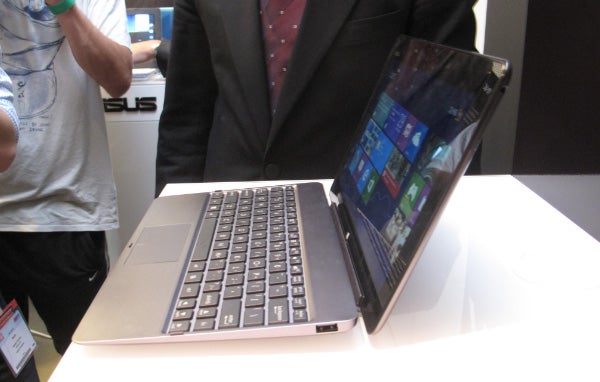 Nevertheless, it’s hard not to be impressed by this little marvel in person, especially if you’re already a fan of the Asus Transformer Pad range. The tablet has a 10.1-inch screen – nothing special – and a slim body, but seeing such a desirable form take on a Microsoft tablet operating system is more refreshing. Over the past year, most of the Windows tablets have been hopelessly heavy and chunky compared to Android alternatives.

Like the Asus Transformer Pad Infinity, the Asus Vivo Tab RT uses a hybrid design, with a removable keyboard dock that both turns the tablet into a laptop and provides extra battery life – Asus claims “all-day use” but hasn’t specified hour figures. Yes, it’s similar to the Transformer norm, but the hinge mechanism has changed since we last looked at an Asus tablet earlier this month. 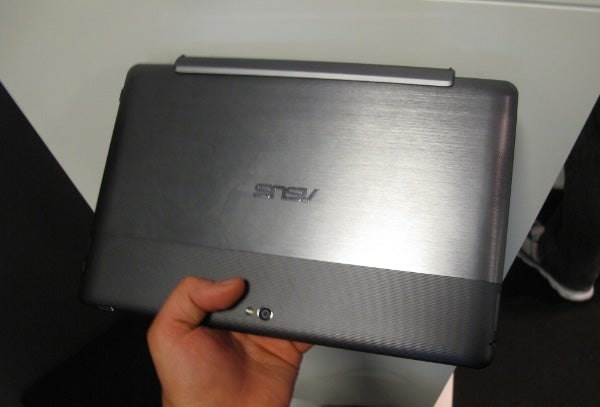 Asus calls it the “hidden hinge” design, and it pushes the hinge out of view while it’s in use for an overall cleaner look. Asus’s dock connector has changed too. Gone is the chunky 40-pin socket, and in its place is something smaller and neater. The basic build quality values are much the same, though. The body is made largely from textured aluminium and feels stunningly well-made.

Stylistically, there are a few minor changes. The Asus-staple concentric circle texture seen on the rear of the Asus Transformer Pad Infinity has been switched for a simpler brushed finish. We assume it’s because the plastic top section of the lid has expanded even further, which would only be highlighted by the circular motif. The Asus Transformer Prime featured an all-metal back, but after connectivity issues arose from the design, plastic has made a not-entirely-welcome return. 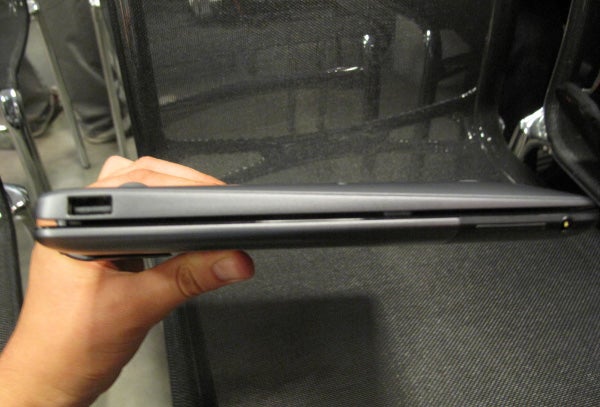 In the trade off, you do benefit from some weight loss. The tablet part on its own weighs a mere 520g, around 80g less than most 10.1-inch Android tablets – and it’s a mere 8.3mm thick. Asus says it has been able to do this thanks to Nano Moulding Technology, which permeates the metal finish with plastic particles. Sounds a bit like a Sci-Fi film to us. In-hand the Asus Vivo Tab RT feels just as impressive as a Transformer model. And that’s a good thing.

The screen is also very impressive. Like the Pad Infinity, the Vivo Tab RT uses a 1,366 x 768 pixel resolution Super IPS panel, offering superb brightness of 600 Nits and excellent clarity. Pixel density isn’t anywhere near as high as an Apple iPad 3 or a top-spec Android tablet, but it’s not bad. It’s covered with Corning Fit Glass, a toughened surface similar to Gorilla Glass. 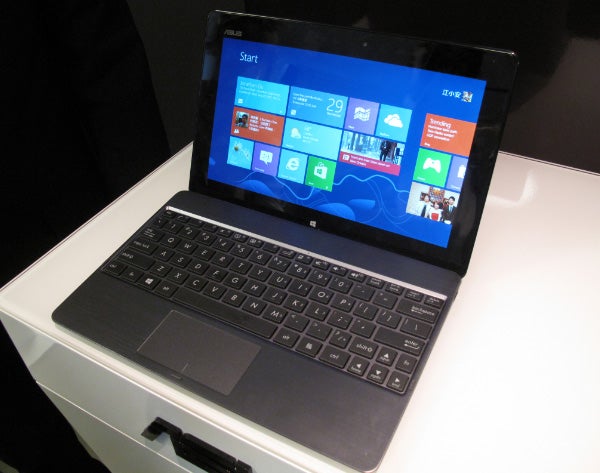 Naturally, the Asus Vivo Tab RT uses a capacitive touchscreen, which feels right at home with Windows 8 RT’s Metro interface. A brief flick around revealed no lag, despite being a pre-production model. Asus says that Office 2013 will also come pre-installed on the tablet – it’s ready for productivity as well as noodling about with games and the net. Nvidia says that the Windows Tegra Zone will be ready for launch, though, so a fistful of games will be on-hand for the fun stuff too. We got to see Unreal Engine 3’s Epic Citadel running on the tablet, and it seemed smooth as butter.


As a lower-cost Windows RT tablet, the Asus Vivo Tab RT doesn’t use a high-flying Intel Ivy Bridge processor but a quad-core Tegra 3 variant. This is similar to the CPU you’d find in a Google Nexus 7, which costs considerably less (we assume… Asus has not revealed pricing details as yet.) 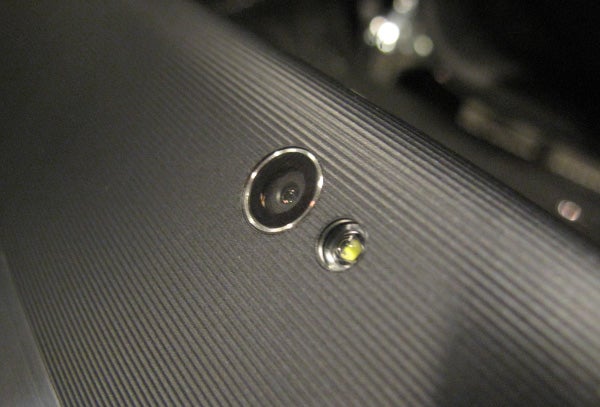 The full array of standard tablet features are included here, though. There are two cameras, and the rear one is pretty well-specced. It offers an 8-megapixel sensor and is backed-up by an LED flash. A whopping four internal speakers are packed in and NFC is also on-board – NFC stands for Near Field Communication and is what’ll let you buy pairs of pants and cups of coffee with a phone or tablet within the next 12 months. Fingers crossed.

Fantastic build, a good look and a good screen – what’s not to like? What’s likely to be picked-up by Asus fans is that neither the tablet nor its keyboard dock offers a memory card slot. You’re stuck with internal memory and Cloud storage options here. Like Microsoft’s Surface, connectivity in the Asus Vivo Tab RT is very limited. The keyboard dock adds a full-size USB port, letting you plug in a mouse, but that’s it. And the tablet part features just a headphone jack and a video output on top of the new proprietary charging/data transfer plug. Next to an Android Transformer tablet, it’s pretty sparse stuff. 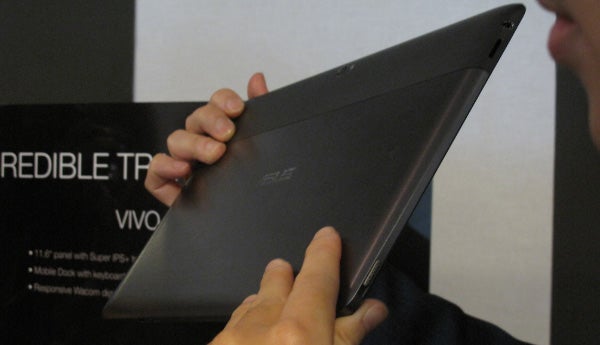 There are just a few reasons to grumble here, though, and we don’t doubt the Asus Vivo RT will turn out to be one of the most promising first-wave Windows 8 tablets. We’ll be back with the full review soon.