A 13.3in screen on a laptop has always made a good compromise. It’s just big enough that it’s comfortable to use, but just small enough that you can carry it around in relative comfort. Machines like the Asus UL30A have taken this philosophy to heart, but remove the optical drive and add bigger batteries, and low-voltage processors, to help boost battery life. This machine isn’t alone in this strategy, however, with the likes of the Sony VAIO Y Series and HP Pavilion dm3-1020ea providing stiff competition.

If you’ve read any of our previous reviews of such machines, the basics of the Asus UL30A should be familiar to you. At its heart beats an Intel Core 2 Duo SU7300, whose two cores chug along at a surprisingly lively 1.3GHz and are supported by a 3MB Cache. Asus trumps many rivals in adding a full 4GB of DDR3 RAM and a 64-bit install of Windows 7 Home Premium to match, and a decent 320GB hard drive for storage. Predictably graphics are of the Intel GMA variety, which won’t do much for games but can accelerate HD video competently. This spec is right on the money for the circa £530 asking price.


It’s just as well the UL30A is well-specified for its price, because it’s not much to look at. We have no qualms over the black, brushed metal lid – it actually adds a sense of classiness sorely lacking from the likes of the Dell Inspiron 13z. Inside, however, things take a turn for worst. Black and glossy is as much as can be said, which is inoffensive provided you can live with the greasy fingerprints, but loses several points for imagination. Is a little contrast too much to ask? 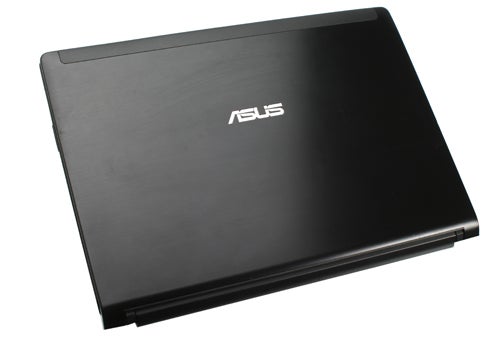 Still, at least Asus doesn’t try to over complicate things, and the UL30A is quite thin and light. At the tapered front edge it measures a miserly 14.8mm and, even with a big battery at the back, at its thickest it’s just 24.6mm. It’s a damn big battery too, an eight-cell unit with an 84 Watt-hour (5,600mAh) capacity. This should auger well for our battery life testing later on. Consequently the UL30A isn’t quite a feather-weight, but at 1.8kg it’s still eminently portable.


Connectivity covers the basics well, but doesn’t excel in any particular way. As such you get the standard three USB ports, HDMI and VGA for video, two audio jacks (1x headphone, 1x microphone), a memory card reader, and a Gigabit Ethernet port. Asus offers both Wireless-N Wi-Fi and Bluetooth, which is encouraging for such a reasonably priced machine. 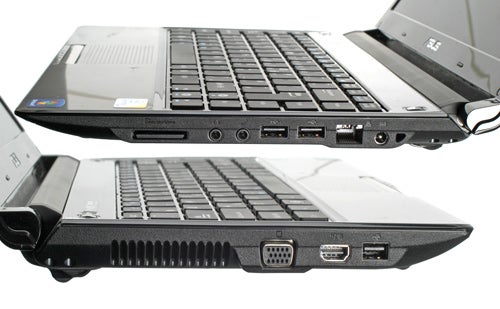 One thing that does separate the Asus from some competitors is the presence of Asus’ ExpressGate instant-on OS, which is based on DeviceVM’s Splashtop. It offers up options for a web browser, music player, video player and Skype calling in double-quick time, but we’ve long since concluded the functionality is too limited to be of any practical use.

Like so many laptops at the moment, the Asus UL30A adopts the isolation-style keyboard and to good effect, too. Its layout is very good, with all the keys being exactly where you’d expect. Asus has even included Home, End, Page Up and Page Down keys down the right side of the keyboard, though we’d have preferred it if the cursor keys – whose secondary functions are playback control – were slightly withdrawn. 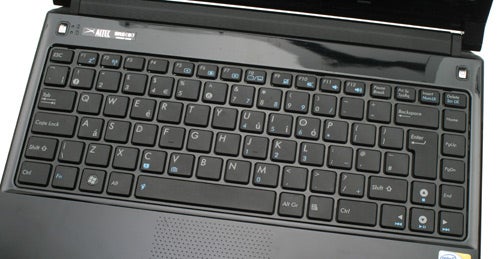 What makes the UL30A particularly good to type on, though, are the key actions. They strike a nice balance between depth and crispness of response, while having the added benefit of being unusually quiet – a nice bonus if you often work in libraries or lecture halls. Even a small amount of flex in the centre of the keyboard can’t detract from an excellent experience.


Like a lot of the Asus laptops and netbooks, the UL30A’s glossy finish is interrupted by a dimpled surface that outlines the touchpad. This proves a surprisingly nice surface to interact with, and though the buttons – which form one rocker switch – initially feel a tad stiff, in actual fact they offer decent feedback. There’s support for two-finger scrolling, but no other multi-touch goodness that we could tell.

For such a reasonably priced laptop the UL30A has a decent display. It has all the usual modern traits: a glossy, reflective finish; 1,366 x 768 native resolution; and some slightly awkward horizontal viewing angles. However, in all the important ways, such as colours, contrast and brightness, it doesn’t disappoint.


Even the speakers are better than average, though that isn’t saying a great deal really. They still lack the sort of mid-range punch necessary for truly pleasing audio, but the speakers – which have Altec Lansing and SRS branding, if that’s worth anything at all – reach good volumes and with some clarity. They’re definitely better than the speakers on many competing laptops. 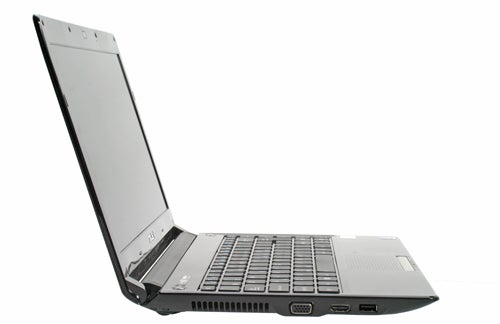 One concern we do have about the UL30A is its build quality. We wouldn’t classify it as bad per se, but our model did have at least one creaking panel to the left of the touchpad. It could just be that our particular sample has seen one too many courier vans in its time, but the plastics – particularly around the keyboard – aren’t of the highest quality.

Having seen so many laptops the like of the Asus UL30A, its performance generates few surprises. It performs almost identically to the Sony VAIO Y Series, while outperforming the AMD-powered HP Pavilion dm3-1020ea by a reasonable margin.

Ultimately it is performance that is ideal for day-to-day mobile usage, providing enough oomph to cope with HD video and general photo editing tasks with no hiccups. System responsiveness is good, too – it’s in a completely different league to any Intel Atom-based netbook, even dual-core or Ion equipped ones.

Of course gaming isn’t a strong suit, as our entry-level TrackMania Nations gaming test reveals. Here the HP Pavilion dm3 holds a small advantage, but if portable gaming is what you’re after you’re going to have to up the budget and pick-up an Alienware M11x.


Battery life, on the other hand, is a completely different story and the Asus outperforms all its competitors, too. In our semi-intensive productivity test it managed an astonishing 651 minutes, or 10 hours, 51 minutes. This annihilates other systems, even those with comparatively good battery life in the seven to eight hour region. Only the smaller Acer Aspire 1810TZ can match it in our memory.

What’s more, even by low-voltage laptop standards, the UL30A is unerringly cool and quiet. This is a heady mixture of benefits for a laptop which, at around £530 to £580, undercuts many of its contemporaries. That price even includes a two-year warranty, as opposed to the standard one-year offered by many manufacturers. If Asus could marry some of this value with a slightly smarter, more imaginative chassis, it might have scored even more highly.


It won’t win any beauty pageants, but the Asus UL30A has it where it counts: value and battery life. A great keyboard, solid feature set and generous two-year warranty only further strengthen its credentials.