Asus was one of the launch partners for the nifty graphics switching tech, Nvidia Optimus, so it’s no surprise to see it appear on another of its laptops: the 13-inch U35Jc. Unlike previous appearances, however, such as on the budget K52Jc or the multimedia-centric N53Jn, the U35Jn’s portability makes the technology potentially invaluable.

With the U35Jn Asus is competing with the likes of the HP Pavilion dm4 and Samsung Q330, and just like them it retails in and around the £650 region. It’s subtly different to either, however, as it jettisons an integrated optical drive in favour of the dedicated GPU. Which is more important is up to the individual, but at least Asus offers something a little different.


At 1.9kg the Asus weighs around the same as its competitors, and is ‘portable’ as opposed to ‘ultra-portable’. Visually it borders on stylish, but is let down by somewhat slapdash look and feel. Its black, brushed metal lid is very nice, as is the brown, smooth plastic finish around the touchpad and palm rest. We found the black plastic bezel discordant, however, and the general build quality is merely so so. Panels flex noticeably under pressure, and the general fit and finish isn’t on a par with the HP or Samsung. 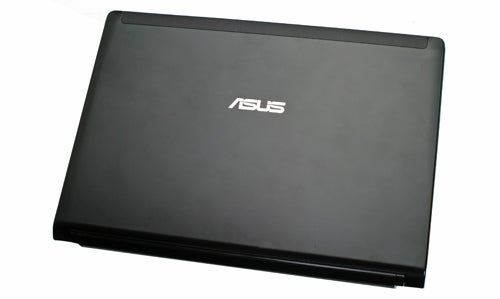 No complaints can be made of the specification, though. Running matters is a 2.4GHz, Intel Core i3 processor, ably supported by a 3MB Cache, 4GB of RAM and both Intel HD Graphics and a 1GB Nvidia GeForce 310M where required. 802.11n Wi-Fi, Gigabit Ethernet and Bluetooth 2.1 are all included, too, giving the U35Jn a comprehensive spec.

You get a fairly standard range of connections, including three USB ports, HDMI and VGA. There are a couple of audio jacks and a memory card reader as well, but eSATA is conspicuous by its absence. Also, unlike competing machines, none of the USB ports feature standby power charging – a useful feature for charging phones and other accessories.

One of the more disappointing aspects of the U35Jc is the keyboard. Its layout is okay, and we don’t mind the use of isolation-style keys. No, as hinted at earlier, it’s the amount of flex in the keyboard base that’s our concern. As ever some people’s mileage will vary but, despite the key actions themselves being adequate, the prodigious flex present is very distracting. 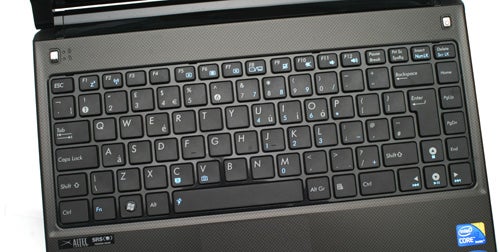 Thankfully touchpads are rather more straightforward, and the U35Jc makes no mistakes here. The smooth surface is pleasant to the touch, and the pad supports our favourite of all multi-touch gestures: two-finger scrolling. Unlike either the HP Pavilion dm4 or Samsung Q330, it also doesn’t interfere at all when typing – a small bonus considering the mediocre keyboard.

The display is much the same as most laptops around. Its viewing angles are quite shallow, but on a small laptop this isn’t such a critical concern. More relevant is that, like 99% of all ‘consumer’ laptops, the display has a glossy, reflective finish. Coupled with a glossy bezel this can be quite distracting when out and about, though the U35Jc is hardly alone in this issue.


A 1,366 x 768 resolution is standard for this size of screen, and it offers decent desktop real-estate. In use it’s reasonably colourful and sharp, but isn’t outstanding in any particular way: it just does the job. 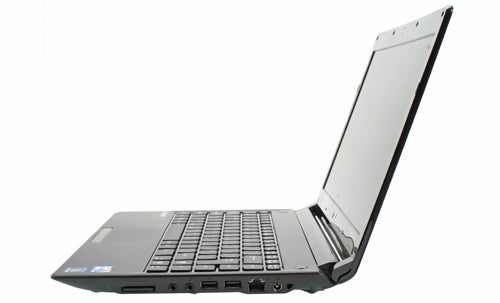 Normally we’d recommend a set of headphones and speakers by at the ready, but the U35Jc is above average in the audio department. Its speakers offer decent mid-range clarity and volume, though their position on the underside of the machine may prove troublesome on some surfaces.

Though the U35Jc’s Core i3 processor lacks Intel’s performance-boosting Turbo Boost technology – as found in the HP Pavilion dm4 – its high 2.4GHz clock speed ensures the U35Jc is no slouch. It’s only marginally slower than the HP in our testing, and outperforms the Alienware M11x’s low-voltage setup quite comfortably.

This means it’s a genuine all-round computing all-rounder, a computer as happy encoding video as it is browsing the web and playing high-def Flash video. Like most Asus laptops of late, it also runs very coolly and quietly. You needn’t worry about burning your lap when using this laptop.

Our gaming testing is interesting. Though the Asus is comfortably quicker than the HP, the Alienware’s GPU shows the GeForce 310M in the Asus doesn’t make it a genuine portable gaming machine: it just can’t cope with the more demanding STALKER benchmark. This still means you can play more games than on competing machines, but also that you’ll quickly run up against games you can’t play. This does erode the value somewhat, especially as you don’t get an optical drive.

Still, thanks to the graphics switching ability, you can enjoy this improved gaming performance and suffer no ill-effects on battery life. Our U35Jc lasted a creditable 377 minutes (6hrs, 17mins) in our Productivity test, which is only marginally less than the HP and near identical to the Alienware. It also beats the Samsung Q330 in this test, which could tip the balance in the Asus’ favour.


Flexing keyboard aside, the U35Jc is an excellent laptop that offers extremely good value for money. It loses a point for that iffy keyboard, but its overall performance is good enough to earn it our recommendation; if you want something a little but different from a 13-inch laptop, it’s your best option.