Even though you may not think of Asus as a big player in the notebook market, it’s worth remembering that this huge Taiwanese company actually manufacturers notebooks for some of the big brands that you will be very familiar with. With that kind of know how behind it, it comes as no surprise that Asus can create notebooks that give the likes of Sony and Apple a run for their money, and the U1F that I’m typing on right now is a prime example. 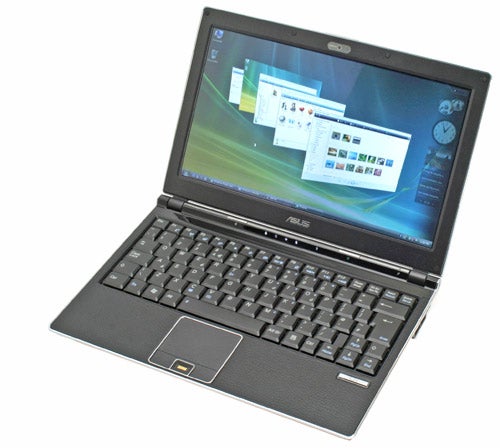 There are a lot of thin and light notebooks around these days, but the U1F is an ultra-portable in every sense of the word. Weighing in at a feather light 1kg, it’s one of the lightest notebooks I’ve ever reviewed, with only the iconic Sony VAIO X505 coming in lighter at 822g. Of course the X505 didn’t even have an integrated Ethernet port, let alone integrated wireless. Since you can’t actually buy the X505 anymore, it’s probably the VAIO TX3XP that the U1F is going up against. But even the super-svelte TX3XP weighs 250g more than this Asus, but then it also has an integrated DVD writer. The U1F is also slightly smaller than the TX3XP at 276 x 190 x 24mm (WxDxH) compared to 272.4 x 195 x 28mm.


Asus has foregone having an integrated optical drive in the U1F, instead opting for ultimate portability. In that respect the U1F feels very similar to the Samsung Q30 that I reviewed a couple of years ago, although the Q30 was also missing a PC Card slot, whereas the U1F has an ExpressCard slot. The importance of a PC Card or ExpressCard slot is that it means the user can insert a 3G data card, and have Internet access almost anywhere. The lack of an optical drive isn’t a major issue for me, since I rarely use one when I’m out and about, although the fact that the Sony TX series manages to squeeze one in without compromising size and weight is impressive. 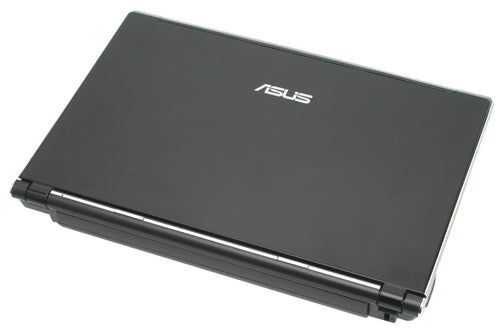 One area where the U1F does have Sony’s TX3XP beaten is the choice of CPU – the TX3XP utilises a single core chip, while the U1F is equipped with a dual core Intel U2400 running at 1.06GHz. With 1GB of system memory supporting the ultra low voltage CPU, the U1F isn’t going to be a power house when it comes to performance. Now, usually I’m not that bothered by raw performance in an ultra-portable notebook, but considering that the U1F is running Windows Vista, it does feel slightly sluggish. My advice would be to specify 2GB of RAM at the point of purchase, as this should make all the difference.

There’s a 60GB hard disk taking care of storage, which may seem meagre by today’s notebook standards, but for most mobile users, it should be more than enough In fact the retail notebooks will ship with 80GB drives instead. Personally I would rather see a solid state disk in a notebook this size – it would save weight, improve performance and take a mechanical point of failure out of the equation. As already mentioned, there’s no optical drive built into the U1F, but you do get an external drive bundled. The external drive connects via USB and also makes use of a DC output on the notebook for power. 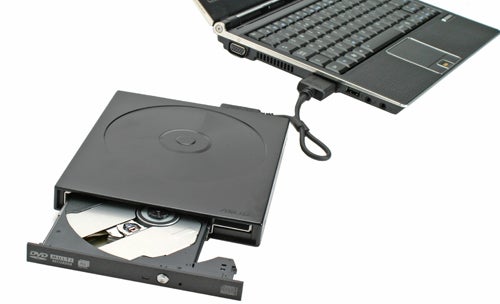 It’s surprising that it’s taken me so long to talk about aesthetics, because this notebook really does look good. The glossy black lid may pickup fingerprints faster than Gill Grisham, but when it’s clean it gives the U1F a real sense of style. Open up the lid and things just get better, the whole wrist rest is finished in black leather. Now, I wasn’t too sure about Asus’ decision to start adorning its notebooks with cow, but I’ve got to say that it really works in this instance. I’m still not convinced I’d like the lid to be covered in leather as it is on other models, but used sparingly it definitely adds both visual and tactile appeal. 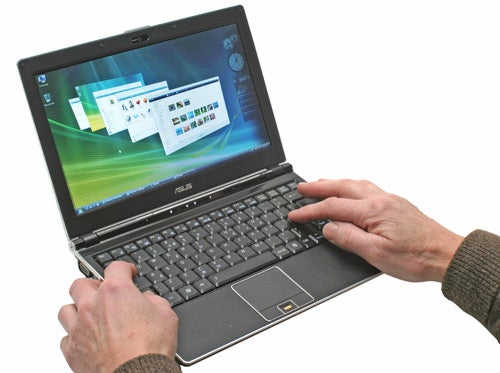 Just like the Sony TX3XP, the Asus U1F has an 11.1in screen with a native resolution of 1,366 x 768, and also just like the Sony, the screen in the U1F uses LED backlight technology. Interestingly, Employing an LED backlight brings with it several advantages, not least of which is how thin the screen can be compared to traditional TFT examples. The LED backlight also rewards the user with a wider colour gamut and should improve the overall battery life of the notebook. When Sony first introduced LED backlight technology with the TX1XP, there was a significant problem with light bleed at the base of the screen, but this was improved upon and pretty much eradicated with later models. Thankfully the U1F shows no signs of light bleed, indicating that this screen is based on the latter technology, rather than the original design.

The screen really does look good and shows Windows Vista off very well indeed. The glossy coating makes colours look bright and vivid, without making the display overly reflective. Using the U1F in an office environment caused me no problems, even with multiple ambient light sources surrounding me. The high contrast also lends itself well to watching movies. Of course the lack of an optical drive means that you won’t be watching DVDs on the U1F, but I think most notebook users tend to watch MPEG4 content straight from the hard disk these days anyway.

The black keyboard is highlighted with silver flecks, for a kind of metallic black finish – the result is pretty subtle, but attractive nonetheless. Despite the small dimensions, the keyboard is well laid out with the Tab, Caps Lock, Shift, Return and Backspace keys all large. Also, Asus has been smart enough to position the Ctrl key in at the bottom left of the keyboard where it should be, rather than placing the Fn key there like many other notebook manufacturers do. The keyboard itself is pretty good to type on, although there is a noticeable amount of flex evident when you’re typing fast. That said, the keyboard still has a very positive feel to it, and each key has a decent amount of travel and a solid break – I certainly found it comfortable to type for extended periods on the U1F. 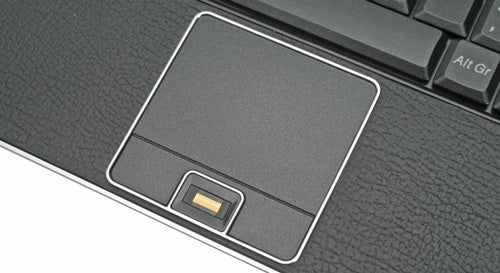 Less impressive is the touchpad that’s located below the Spacebar. First up, the touchpad has a traditional aspect ratio, rather than a widescreen one to match the screen. This means that you need to bump the sensitivity up pretty high in order to make your pointer traverse the width of the screen in one movement. But the real problem is the buttons. The two selector buttons below the touchpad are stiff and unresponsive, making it difficult to double click icons sometimes. Things aren’t helped by the fact that Asus has squeezed a fingerprint scanner between the buttons, causing them to be smaller than you’d really like them to be.

Nestling above the screen is a 0.3-megapixel webcam – handy if you fancy doing a bit of video conferencing on your notebook. There’s also an integrated microphone mounted just below the screen, although you’re still better off using a headset if you want the other person to understand what you’re saying.


There’s integrated 802.11a/b/g Wi-Fi on offer, to get you connected to your home or office wireless networks, not to mention the plethora of hotspots around the world. There’s also integrated Bluetooth for connecting to your mobile phone, using a wireless headset or even a wireless mouse.

There’s an impressive amount of connectivity on offer considering the limited dimensions of the U1F. On the right you’ll find the power socket, a modem socket, an Ethernet port, an ExpressCard slot, two USB 2.0 ports, a four-pin FireWire port and a hardware switch for the wireless adapters. The front is barren apart from a memory card reader that will accept SD, MMC and Memory Stick formats.

At the left there are another two USB 2.0 ports, which is pretty impressive for an ultra-portable machine like this. One of the USB ports has a DC output next to it for use with the bundled external DVD writer. Here you’ll also find headphone and microphone sockets, along with a D-SUB port.

In the box you’ll find a surprisingly large external DVD writer, although the fact that it is powered directly from the notebook makes up for this somewhat. There is also a hardware power switch on the rear of the drive, so you can keep it connected to the notebook without drawing power.


Asus supplies the U1F with two batteries – one three cell and one six cell unit. I wasn’t able to run Mobile Mark on the machine, since the current version doesn’t run on Vista, but I did use the U1F on battery power and managed to get about three hours 15 minutes out of the three cell pack. Rough maths would indicate that you’ll get around six hours out of the six cell battery, which isn’t bad, although the larger battery increases the weight of the machine to 1.21kg. Considering that the Sony TX3XP managed over nine hours battery life under Mobile Mark, it’s fair to say that Sony’s svelte baby has got the U1F beaten when it comes to working on the move. 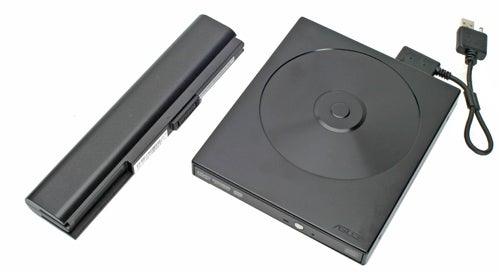 In fact the only benchmark that we’ve managed to get running successfully on Vista is PCMark – well done Futuremark! Firing up PCMark 2005 returned an overall result of 2013, compared to only 1441 on the Sony TX3XP. It’s the dual core CPU in the Asus U1F that gives it the edge over the TX3XP under PCMark.


With a price tag of £1,399 including VAT, the U1F isn’t cheap, but then truly ultra-portable notebooks rarely are. Given that you can pick up the Sony TX3XP for around £1,485 these days, there’s not much between the two machines when it comes to pricing. Which one you buy depends on what’s most important to you – if you absolutely, positively must have the lightest notebook possible, and like the idea of a dual core chip, then the U1F is definitely worth considering. 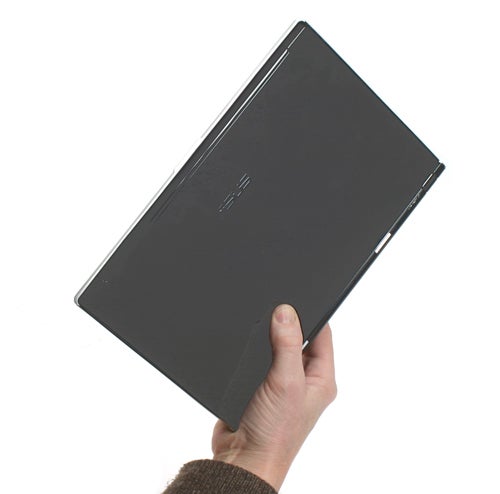 
Asus has definitely proved that it knows how to build an ultra-portable notebook – the U1F is small, light and incredibly stylish. It’s also great seeing a dual core CPU in a machine so small. That said, I think I’d probably still go for the VAIO TX3XP, with it’s integrated DVD writer and nine hour battery life just tipping the scales in Sony’s favour.