The Asus TUF Gaming VG27AQ delivers fast, smooth and crisp gaming thanks to its peak 165Hz refresh rate and improved motion blur technology – it’s hard to find a screen that’s as rapid and as clear as this display. It has a good resolution and great colours, too. Its physical feature set is a little scarce and contrast could be better, but this is a good option for people who play fast-paced games.

Asus has been using its TUF branding for motherboard and graphics cards for a long time, but the firm’s entry-level gaming brand is branching out. It’s appeared recently on laptops and headsets, and the Asus TUF Gaming VG27AQ is one of the first monitors I’ve seen with this designation.

The Asus has Nvidia G-Sync that runs at a standard speed of 144Hz, and the display also works with AMD FreeSync 2 – so it works with any AMD or Nvidia graphics card. The display also has an overclocking function, which means it can run at a peak speed of 165Hz.

I didn’t see any of the ghosting or blurring that can sometimes occur on overclocked displays, and response times only increase by a tiny margin when using this overclocked mode – but the vast majority of users won’t be affected by this, even in competitive scenarios.

The Asus can only use that 165Hz mode over DisplayPort, not HDMI. And, as ever, you’ll need a graphics card that can run games at 2,560 x 1,440 and at framerates approaching 144fps or 165fps to get the most out of this panel. That’s easily done for esports titles, which tend to be less graphically demanding, but you’ll need a beefy GPU to run single-player titles at those speeds – something like an RTX 2070 Super or an AMD Radeon RX 5700. 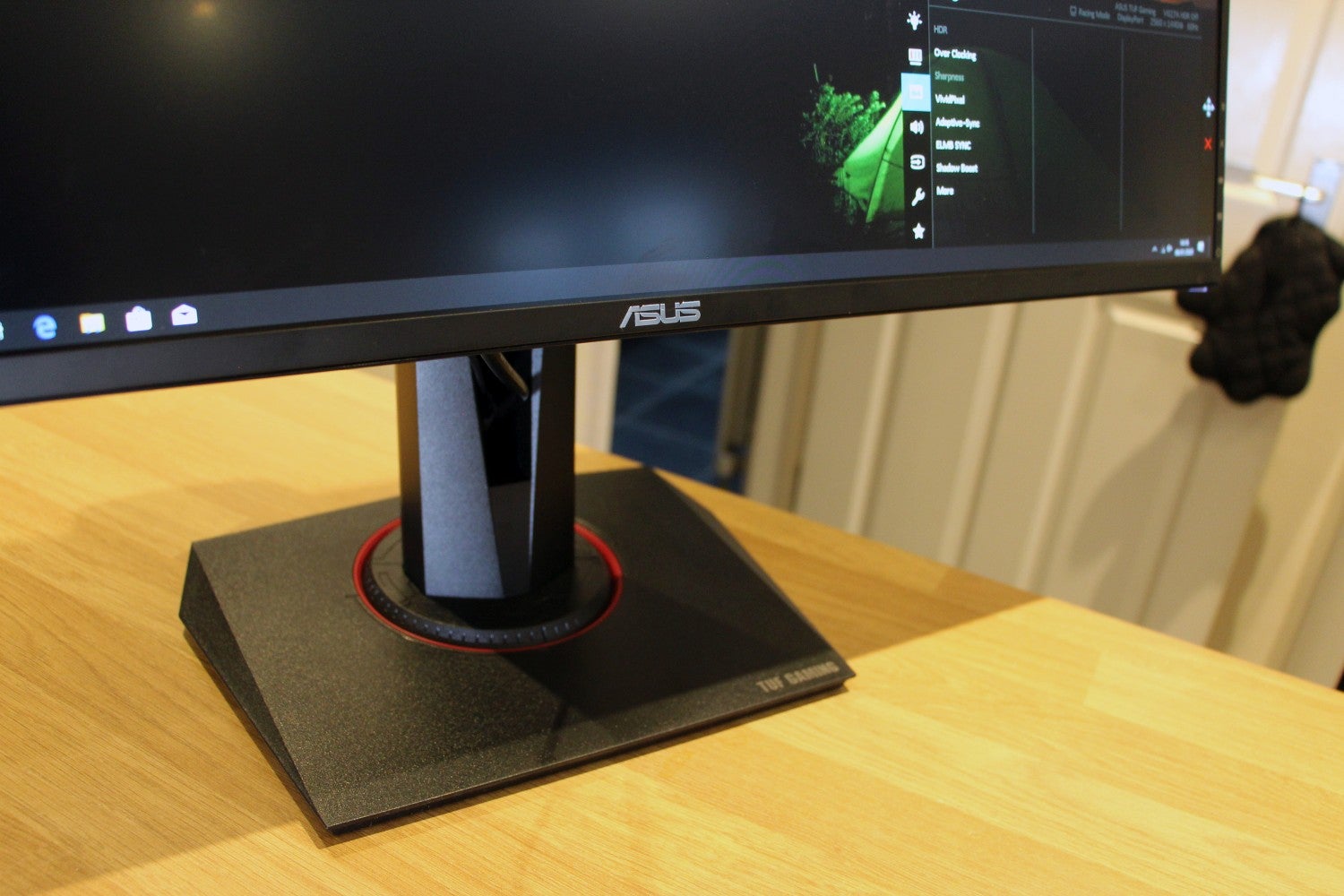 The 165Hz refresh rate is paired with Asus’ ELMB-Sync feature. That acronym stands for Extreme Low Motion Blur, and the VG27AQ is the first time I’ve seen a screen that allows motion blur to work with G-Sync or FreeSync. Previously, motion blur has required fixed refresh rates, which is why it hasn’t worked with variable syncing technologies.

Activating ELMB works well, with butter-smooth gaming throughout and no sign of any ghosting or tearing – and the screen looked incredibly sharp. It’s worth using this feature for fast-paced, competitive games, and it does add some extra versatility to this screen, but be aware that this new technology only has a minimal impact when considered alongside the rest of this display’s features.

The 2,560 x 1,440 resolution is good. It’s high enough to deliver loads of real estate for gaming, and the 27in diagonal delivers a crisp density level of 109ppi. That’s solid – far better than the 82ppi on 27in screens with 1080p resolutions.

The 165Hz refresh rate and 1440p resolution are the Asus’ key gaming attributes, and elsewhere the VG27AQ delivers solid hardware. It uses IPS technology, and it only uses 8-bit colour – fine for gaming, but not quite good enough for work. The 1ms response time is good, too, and easily fast enough for competitive play.

There are some other areas where the VG27AQ’s specification falls behind. It supports HDR 10 content, for instance, but this IPS screen isn’t going to have the brightness to make the most of HDR.

You can find AMD FreeSync 2 panels that work with G-Sync for a little less than the price of the Asus, so the VG27AQ isn’t the cheapest route to this kind of specification – but those panels will miss out on ELMB-Sync and may suffer when it comes to display quality.

The Asus panel has decent build quality and good adjustment options. The VG27AQ has a generous 130mm of height adjustment, and it has 180 degrees of left-to-right swivel and 38 degrees of front and back tilting. It can swing right around to portrait mode, and supports 100mm VESA mounting.

The stand has a cable-routing hole, and the display itself has pleasingly slim bezels, so this screen could conceivably be used for multi-monitor setups. 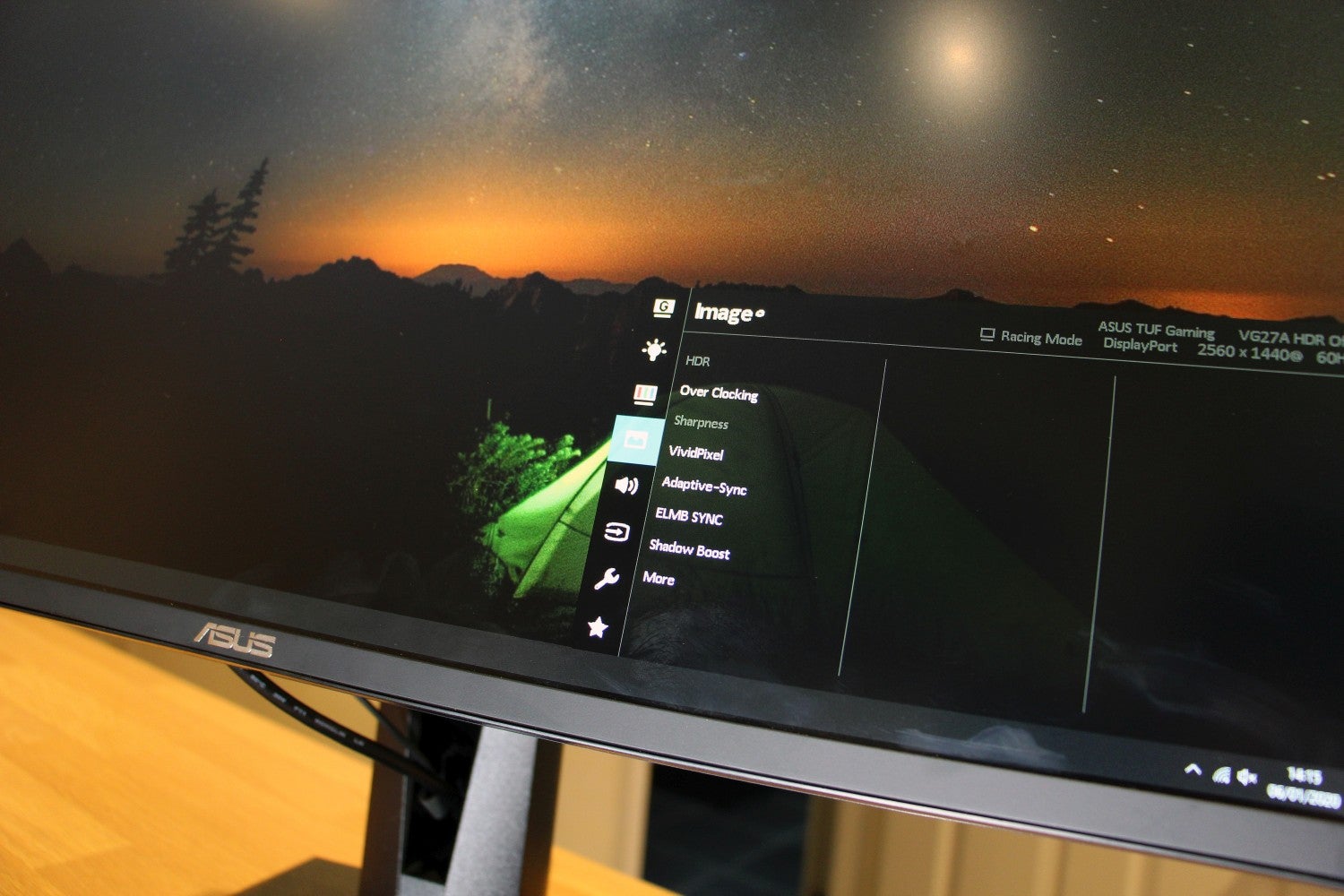 The weight of 5.8kg isn’t bad at all for a 27in screen, and the base is flat and unfussy, so it’s easy to move around a desk and to use for storage.

This is still a TUF-branded panel, though, so it misses out in other areas. The stand doesn’t have a quick-release mechanism, so building takes a little longer. There are no RGB LEDs on this display, and no USB ports – you get two HDMI ports, one DisplayPort connection and an audio jack, and that’s it.

The standard Asus on-screen display is deployed here. It’s not the largest or the best-looking software system, but it’s well-organised. The first menu allows for switching between the key gaming screen modes, and the rest of the options are slotted into conventional menus. 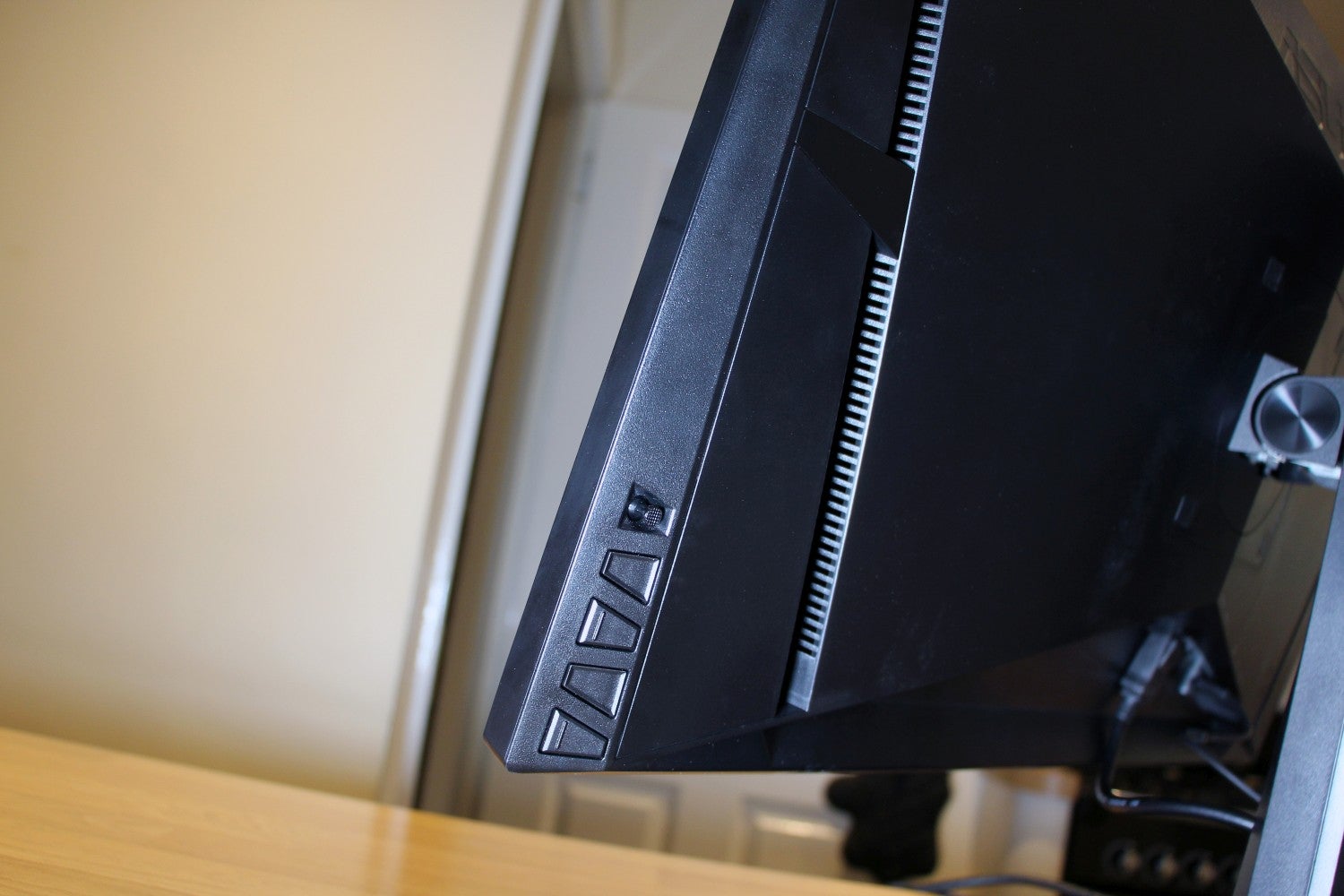 The Asus OSD serves up gaming extras, like FPS counters, on-screen timers and crosshairs that can be accessed from quick-launch buttons behind the bottom-right corner of the bezel, and the main menu is controlled by a joystick. It’s small and a little flimsy, but largely easy to use. The only other slight irritation is that the position of the OSD can’t be adjusted.

The speakers aren’t much cop, either: the pair of 2W speakers are tinny and a little too quiet, and are only good enough for basic media duties – not for gaming.

The Asus delivers great colour quality. The panel’s factory Delta E measurement of 1.36 is superb, and it means no colour deviations that human eyes can detect.

The screen’s colour temperature of 6,298K is great, and delivers tones that are accurate and lifelike – it’s not far enough away from the 6,500K ideal to prove noticeable during gameplay. The gamma level of 2.22 is top-notch, too, tallying well with the key 2.2 figure.

The VG27AQ has an sRGB colour gamut coverage level of 98.5%, which is great. However, the panel ducked below 80% in the Adobe RGB and DCI-P3 gamuts, which means this screen doesn’t have the colour ability to handle those professional and HDR-focussed ranges. 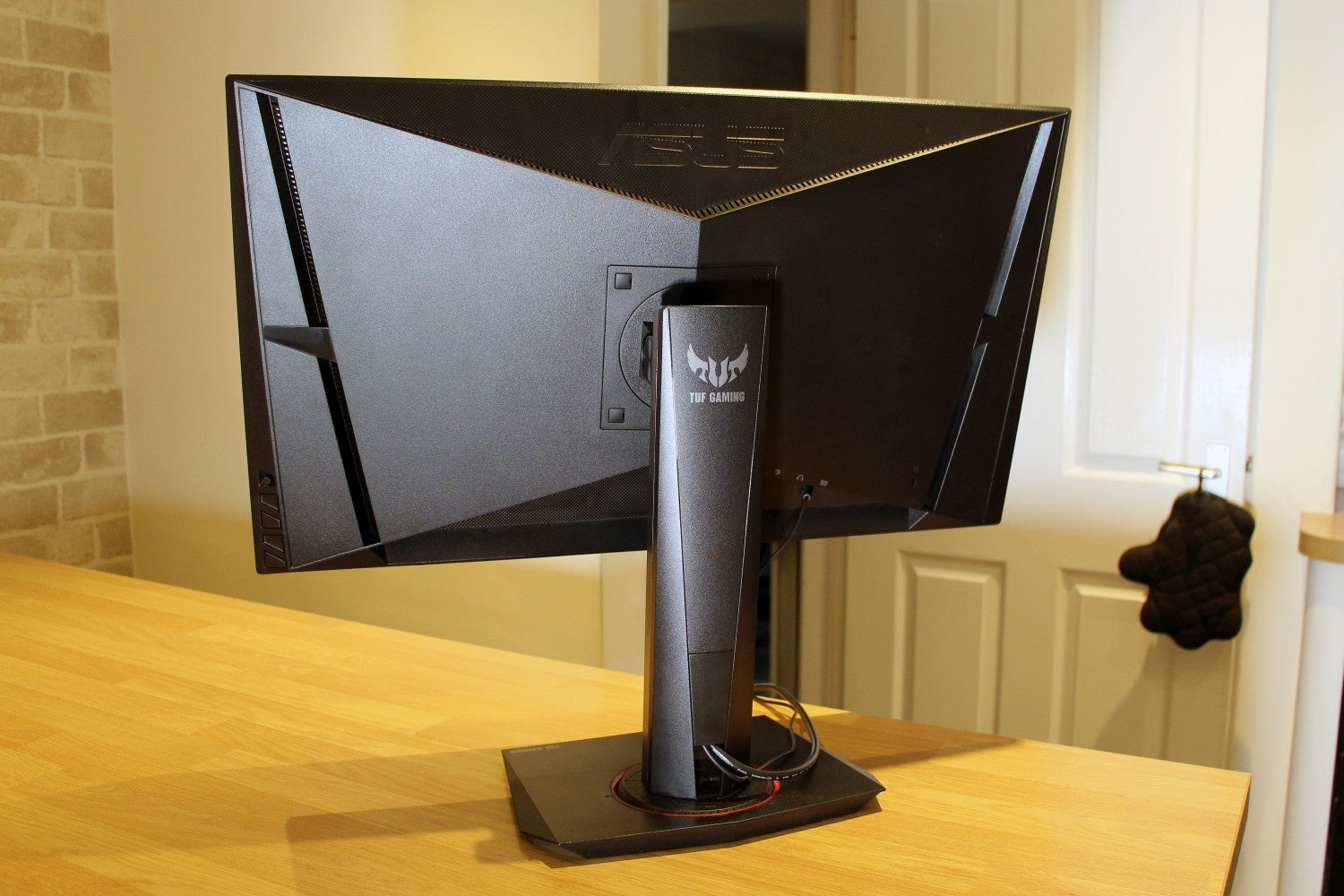 Those colour temperature, accuracy and gamma levels were maintained with the screen at maximum brightness and with the panel at half its original brightness levels, so you’re going to get consistent colours no matter how bright the panel is.

That default brightness level pairs with a black level of 0.24 nits, which means a default contrast ratio of 1,154:1. That result is absolutely fine for mainstream gaming and for esports, but it’s not particularly high – many gaming monitors will deliver better contrast. 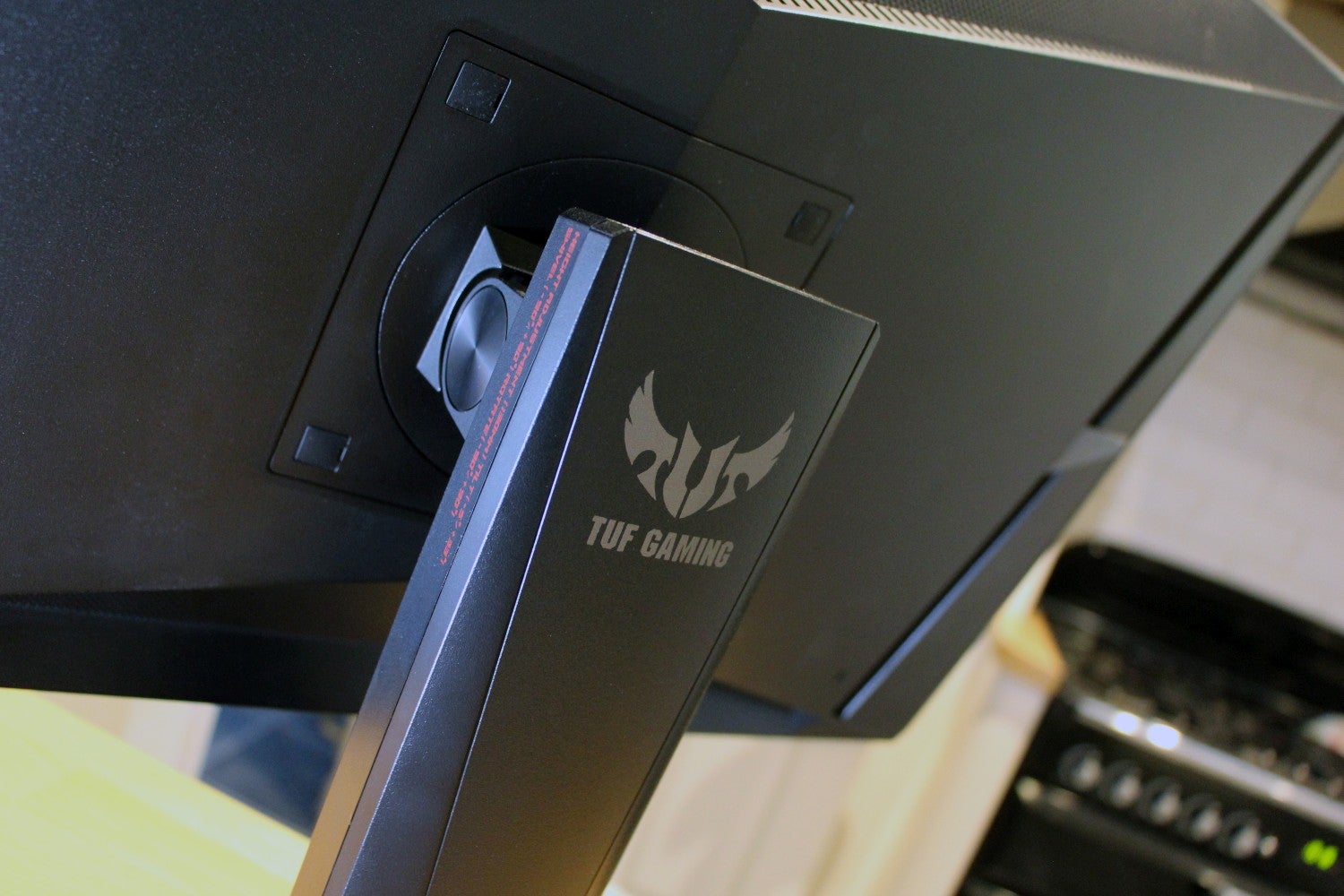 So, while the Asus panel has enough contrast to make games look punchy and vibrant, and with enough depth, there are plenty of panels out there that will deliver deeper, darker shades and a broader contrast range.

The Asus has great colours but merely decent contrast, and that feeds into what this panel can and can’t accomplish. It’s great for mainstream gaming, but the screen doesn’t have the depth of contrast or the colour gamut ability to handle HDR content – it’s just not good enough to provide a noticeable boost.

The screen has the accuracy and contrast to handle gaming and esports, and its input lag measurement of 6.3ms is excellent. Combine the colours, input lag and refresh rate abilities and you’ve got a screen that’s very good for fast-paced scenarios. 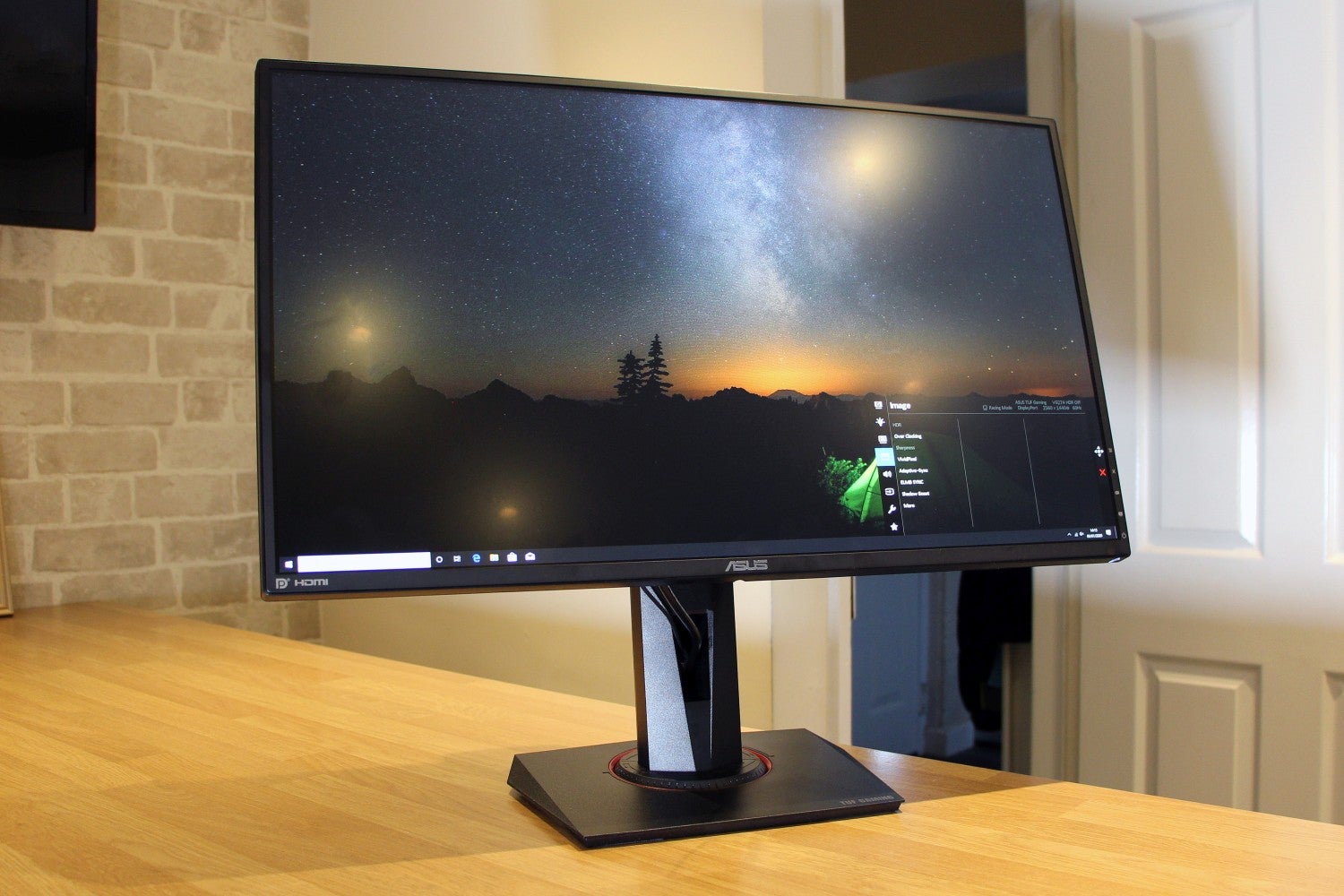 Elsewhere, though, the VG27AQ suffers in predictable areas. The Asus uses its Racing mode by default, but the other display modes are worse and so not worth using. The FPS, RTS and RPG options are very bright, but with poorer Delta E figures and warmer colour temperature results – so images look a little too red and oversaturated.

The MOBA mode is almost monochrome, the sRGB option has poor contrast and is too warm, and the Cinema option is far too cool, with images that had a noticeable blue hue.

Uniformity levels are only middling, too. The Asus lost between 14% and 18% of its brightness on the left-hand edge and up to 16% on the right-hand edge, with Delta Es that veered up beyond an average of 4. These aren’t ruinous figures and the small differences won’t be noticeable during games, but this panel is not the most consistent on the market.

Should you buy the Asus TUF Gaming VG27AQ?

The VG27AQ marks a successful monitor debut for the TUF brand. The Asus succeeds in several key areas: its high refresh rate and the addition of ELMB-Sync means that this panel has crisp, smooth gaming at high speeds – so it’s well-suited for FPS and competitive play.

Elsewhere, this fast, smooth screen has a versatile size and resolution, and great colour quality. Its contrast is more middling, but it’s still good enough for gaming in that regard.

This screen certainly isn’t perfect. It has good build quality and adjustment, but its feature set elsewhere is scant – the speakers are poor, there are no USB ports and no lighting alongside a middling OSD. Its contrast levels aren’t high enough for HDR, and it doesn’t have the gamut ability for HDR or the quality for work alongside gaming.

That said, the Asus is cheaper than most equivalent screens, and it delivers impeccably smooth, crisp gaming alongside great colours. If you need this level of speed and have a powerful enough graphics card, the VG27AQ is a great choice for competitive and fast-paced gaming.

The Asus TUF Gaming VG27AQ delivers fast, smooth and crisp gaming thanks to its peak 165Hz refresh rate and improved motion blur technology – it’s hard to find a screen that’s as rapid and as clear as this display. It has a good resolution and great colours, too. Its physical feature set is a little scarce and contrast could be better, but this is a good option for people who play fast-paced games.