What is the Asus Transformer Mini T102HA?

When it was first released, the Microsoft Surface 3 was one of the best budget convertibles on the market. It offered a compact satchel friendly design and was an ideal companion for any avid doodler, student or tablet buyer. However, it’s beginning to show its age and has some pretty underpowered hardware.

Which is why the Asus Transformer Mini T102HA looks like a pretty appealing device. The tiny convertible offers similar portability, but comes with newer components that generally match, if not beat the Surface 3’s.

The T102HA delivers on its promise and is a great convertible for buyers on a budget, but issues with its middling Intel Atom CPU and touchpad make it a poor choice as a proper laptop replacement.

From a design perspective, the Transformer Mini ticks all the right boxes. The main tablet section feels well built, despite being a little on the chunky side at  6.9mm thick, and comes with a kickstand on its rear that makes it easy to set up in a variety of different angles.

The fingerprint reader on its back is an added bonus that makes it quick and easy to unlock. Personally, I’d have preferred for it to be placed on the tablet’s side or front, but that’s a small quibble for what is otherwise a useful addition.

The tablet section of the device is also fairly well connected in terms of ports. Along its sides sit a full-sized USB 3.0, micro-USB (used for charging), micro-HDMI and 3.5mm headphone jack. Considering the tablet’s small dimensions, connectivity options are fairly impressive and match – if not beat – many larger convertibles such as the Huawei Matebook and Samsung Galaxy TabPro S. It matches the Surface 3 in this regard. 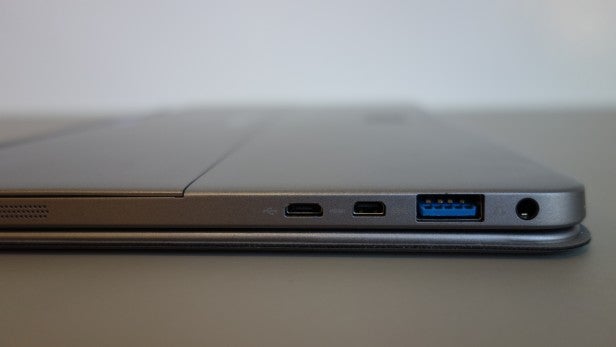 The 64GB eMMC storage is typical for a low-end tablet, but means you won’t be able to store much media on the tablet. But the fact that you can upgrade it via the microSD card slot partially makes up for this.

My only concern is the build quality of the build. In general, the kickstand’s hinge is fine, but on the silver-finish model I tested, it was a scratch magnet – as it was on the Asus Transformer 3 Pro.

Even while traveling with it in padded satchel it somehow managed to pick up marks. Being fair, though, the metal used is otherwise fairly robust. The tablet survived an accidental encounter with my kitchen floor, crack- and dent-free.

I’ve never been a fan of Type Cover-style keyboards. Every one I’ve tested has, at best, offered a usable typing experience. Keys universally display poor travel and don’t feel responsive enough – especially on shallow boards such as the one seen on the Huawei MateBook.

To add insult to injury, many companies also charge extra for such attachable keyboards – including Microsoft.

Asus has addressed the second issue by including the keyboard with the tablet. My initial concern about usability remains, though.

The keyboard isn’t anywhere near as nice to type on as that of a proper laptop, but it’s pretty good by convertible standards. The keys are fairly squashed due to the 10.1-inch form factor, but they offer better travel than I expected and are more tactile. 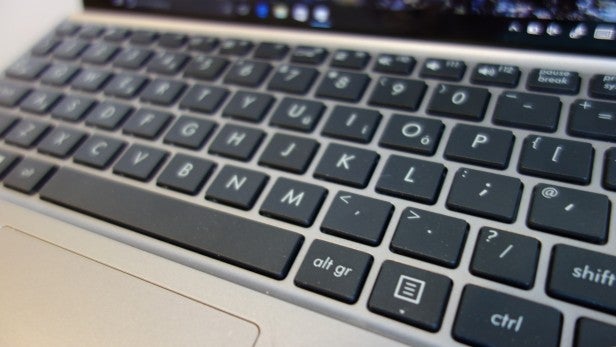 The magnet used to raise the keyboard off the floor is a little weak. On multiple occasions, the keyboard would detach itself from the screen so that it was lying completely flat on my desk, creating a less comfortable typing experience. This might be an intentional addition to allow for extra typing options, but it’s too easy to do when it’s in the elevated position.

The trackpad has few redeeming features. It’s far too small to be comfortable and is absolutely terrible at understanding multi-touch commands. Even basic tasks, such as scrolling up and down, proved too be a challenge for it.

The lack of separate left and right keys is also an annoyance. The touchpad regularly reads an attempt to click one of the keys as a movement, causing the cursor to fly across the screen.

On paper, the Transformer Mini’s 10.1-inch IPS touchscreen isn’t anything to shout about. The 1,280 x 800 resolution is very low for a 2016 device, despite coming with an active stylus, the size means it isn’t ideal for anything but basic notation in OneNote.

The quality of the display is actually pretty great, if you ignore the pitiful resolution.

The 0.48 black level is pretty impressive by IPS display standards and ensures blacks, while not the inkiest, are more than deep enough for Netflix binging and general web browsing.

The 543 lumens white level translates to a wonderfully bright screen with a contrast ratio 1,112:1 – which is excellent for a sub-£500 convertible. The 6,894K colour temperature is a little above the 6,500K ideal – but again, this is far from terrible and ensures that colours look neither too cool or overcooked. 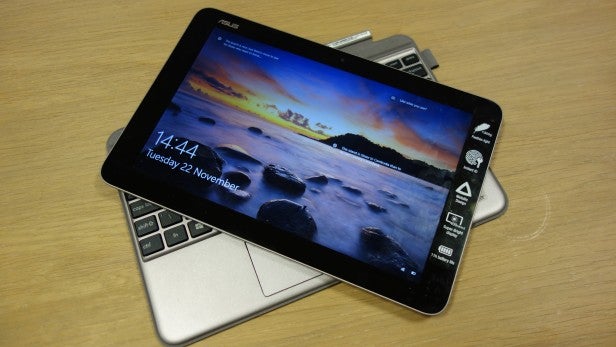 Creatives will scoff at the screen’s 75% coverage of the sRGB colour gamut and 58% coverage of the DCI-P3 spectrum, but to be honest, I can’t see any serious artist or photographer wanting to work on a device this small anyway.

In plain English, then: if you just want a small laptop replacement for basic word processing, web browsing and video streaming, then the screen on the Transformer Mini is more than up to the job.