On paper the T300’s 12in
screen should be one of its strong points as it has a whopping 2560 x
1440 pixel resolution and uses a viewing angle-friendly IPS LCD panel.
And it largely delivers.

It’s immediately clear just how bright
this display can get and its colours feel punchy yet accurate. Sure
enough, firing up our X-rite i1 colorimeter showed this display is
dazzlingly bright, delivering up to 366nits while still achieving a
0.33nits black level, making for an excellent contrast score of 1318:1 –
on par with the Asus UX305 and only trailing the Dell XPS 13 2015 amongst thin and light laptops.

Colour
space coverage is also very high with 97.9% sRGB coverage, while colour
temperature is spot on (6605K – the ideal being 6500K) and its Delta E
of 3.3 is perfectly decent. 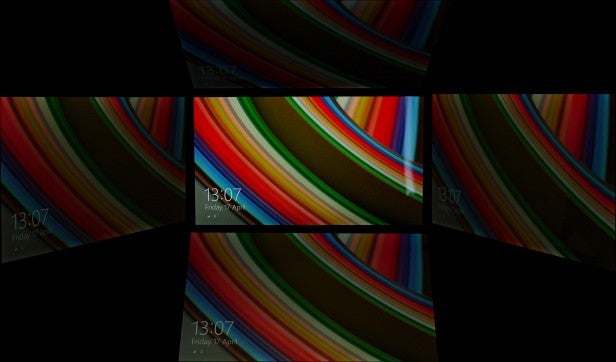 The
resolution is impressive too, though as ever it’s somewhat impractical
on a machine running Windows, as the operating system is still not all
that great at handling very high DPI displays. Programs regularly either
look too small, pixelated or some horrible combination of both.

The
big let-down, however, is backlight bleed. It’s obvious from the moment
you turn the thing on and is a regular distraction, particularly if
you’re watching a movie with black bars above and below the picture. It
really is saying something when it’s as obvious as it is on our pictures
below – it’s often very difficult to capture these visual artefacts but
here the bright halo round the edge of the screen is obvious.

Our
test images also demonstrate the other obvious problem with most
touchscreen devices, which is reflections. It would be harsh to single
out the T300 too much for this as all tablets have the same issue but
when compared to the matte, non-touch screens of competing ultrabooks
such as the UX305, it’s something to think about. 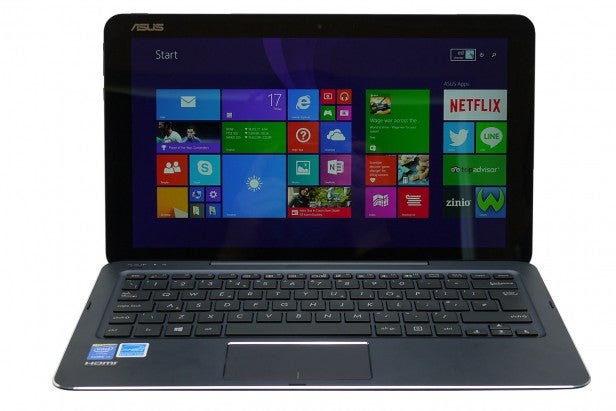 The
T300 is the sort of device that’s meant to spend most of its life in a
landscape orientation and as such Asus has put a speaker on both its
short sides, for stereo sound. We’re always happy to see this feature as
it does add a surprising amount of depth to whatever you’re listening
to.

Of course the overall sound quality is still pretty mediocre
and you’ll want to employ headphones or a Bluetooth speaker whenever
possible but for casual listening in quiet environments they’re up to
the job. 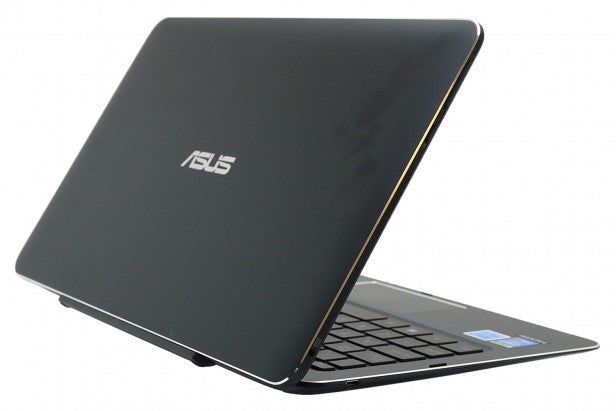 Despite
our concerns about the wireless nature of this keyboard and trackpad
dock the actual performance of both is very good. The keyboard is
spacious and well laid out, with all the usual extra function keys you’d
expect on a laptop also present and correct – no need to jump into
Windows menus to adjust the brightness.

The key action is also
surprisingly good, with a nice defined break and good amount of travel.
In fact we preferred typing on this over the Dell XPS 13 2015. 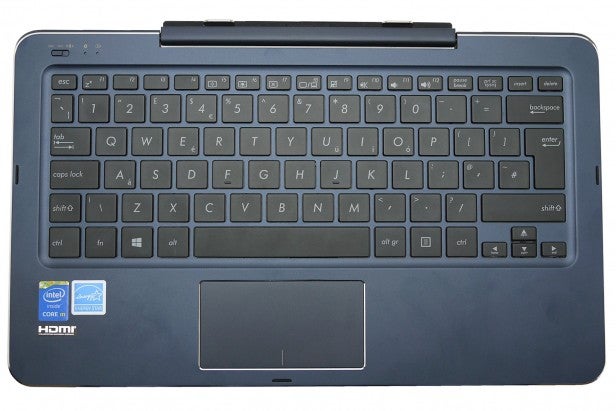 The
same praise can’t be lavished on the T300’s trackpad. The surface is
lovely and smooth, the tracking surprisingly quick and accurate and the
single-click surface is responsive. However, it is a little cramped, and
doesn’t have quite the immediacy of a non-wireless version.

Also,
it is a regular bugbear that when the keyboard dock goes into standby
it takes a moment to power up before it will then fire up the tablet
itself.

As alluded to
earlier, one area where the T300 wants for little is in performance.
Although its Intel Core M processor is slow compared to Core i5 and Core
i7 chips in premium Ultrabooks, it is still enough that Apple has chosen
to use it in its latest MacBook.

Sure enough, for day-to-day
tasks it zips along nicely. It will get a little choppy earlier
than those faster processors – for instance you might have to run fewer
tabs in your browser to keep things running smoothly – but
generally it’s only more demanding tasks that it struggles with, such as
photo or video editing. In other words it’s clearly a consumer rather
than work tool.

Reflecting this, the raw CPU speed benchmark
Cinebench R15 returned a score of 195, which compares to 267 for the
Lenovo X1 Carbon. Meanwhile in PCMark 7 it scored 4413 compared to 4879
for the Lenovo. 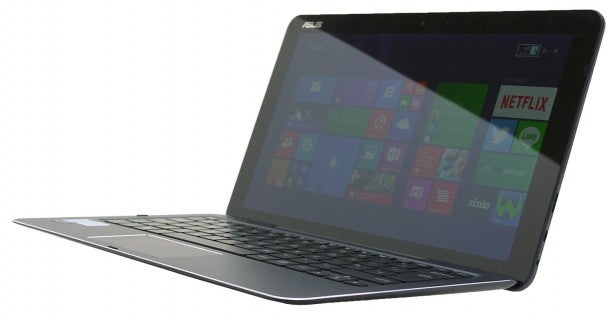 Gaming
performance was actually a little better than we expected, returning
15.2fps in our Unigine Heaven benchmark. However this is still a machine
that will only be suitable for less demanding, older 3D games.

to its use of an Intel Core M processor this machine can be passively
cooled, which means no whirring fans. It also means it doesn’t
get remotely hot to the touch. However we did encounter problems trying
to actually record a CPU temperature with the machine hanging whenever
we ran our 100% CPU load tests.

Really
highlighting the compromises inherent to this new design of the
Transformer, the T300 struggles when it comes to battery life.

In
our standard PowerMark test running a loop of 10 mins of web browsing
and 5 mins of video, the T300 could only last 5 hours and 37mins at a
brightness of 152nits (about 40% brightness).

This compares to
6:46 for the smaller T100 and well in excess of 10 hours for most
ultrabook laptop rivals, not to mention normal tablets running iOS and
Android also deliver in the region of 10 hours.

It really is a poor result. 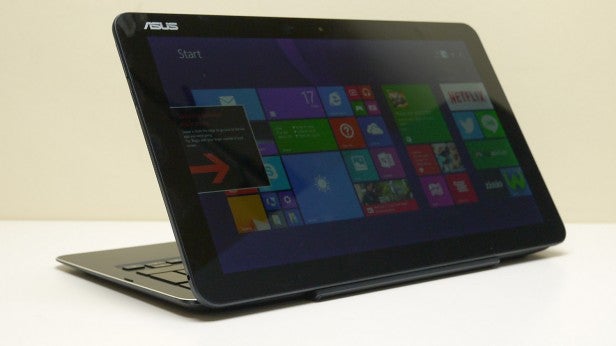 Should I buy the Asus Transformer Book Chi T300?

There’s
a lot to like about the T300, including its impressively sleek and
stylish design and surprisingly capable performance for such a slim
machine.

However, it’s just let down by too many fundamental
problems. Performance-wise, the screen backlight bleed is distracting
and the battery life is poor. These alone would seriously harm this
device’s appeal but then there’s the overall problem of the device just
not quite making sense as a whole.

It all comes back to the
fundamental idea of moving away from the original Transformer concept of
taking a tablet and comprehensively ‘upgrading’ it by adding a keyboard
dock that includes extra batteries and connectivity. With that concept
you can just take the tablet for casual use or bring along the keyboard
for longer journeys or when you’ve got to work.

Instead the T300
ditches the extra batteries and keeps all the connectivity on the
tablet, making for a device that is larger yet hardly more capable than a
conventional tablet yet has neither the battery life nor features to
compete with a laptop.

The
Asus Transformer Book Chi T300 is an intriguing and stylish take on the
Windows laptop hybrid. However, poor battery life, some issues with the
screen and some fundamental problems with the whole 2-in-1 design
approach means it falls well short of convincing as either a tablet, a
laptop or something in between.