What is the Asus Transformer Book T200TA?

The latest tablet-laptop hybrid from Asus is also one of the cheapest examples we’ve seen from this growing corner of the laptop market – and that £350 price is key to the T200TA’s appeal.

It’s the sort of low price that undercuts the cash you’d have to spend to get a proper tablet and a decent laptop, and that makes the T200TA a tempting option – as long as it can avoid common hybrid issues. 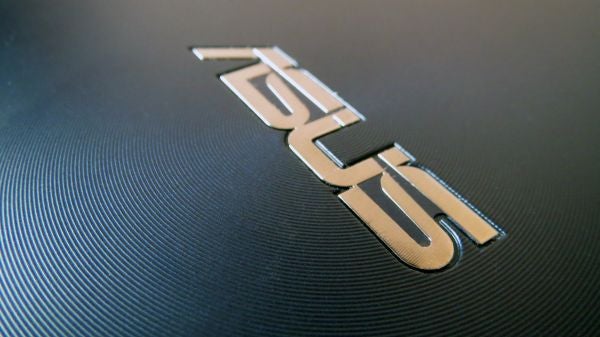 Asus has been making hybrid machines for longer than almost anyone, and it shows. The T200TA doesn’t look or feel like a £350 device: the tablet portion is coated with smart plastic that’s got a subtle ringed pattern, and the keyboard half is topped with a metallic material that tapers to a narrow edge. That keyboard section has great strength, and the tablet half isn’t much weaker – we’d have no qualms about slinging this machine in a bag without any protection.

The T200TA looks smart and feels strong, but its dimensions are a mixed bag – there clearly hasn’t been much room left in the budget for slimming down.

Each half of the T200TA weighs just over 750g, with a combined weight of 1.54kg. Those figures trade blows with the competition: more than the Lenovo IdeaPad Yoga 2 11 and the HP Pavilion x360, but lighter than the 2.1kg bulk of the detachable Toshiba Satellite Click 2 L30W. It’s also heavier than its predecessor – the Transformer Book T100 weighed just 1.2kg. 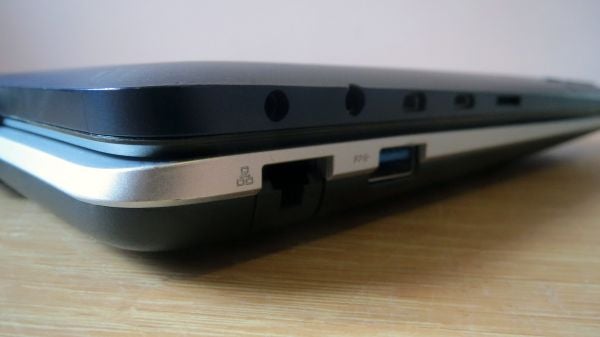 The T200TA isn’t as slim as it looks. The tapered metallic material on the base sits on top of a thicker, darker section, and it’s not the first time we’ve spotted Asus using this trick to make its laptops look slimmer.

The tablet section is 12mm thick, and the dock is 21mm thick so, combined, the T200TA is 33mm at its chunkiest point. That doesn’t compare well to its rivals, as every other machine we’ve mentioned is less than 25mm thick.

The Asus’ detachable 11.6-inch screen means the T200TA is easier to use as a tablet than most of its rivals – the HP and Lenovo machines don’t detach, and the Toshiba’s tablet half is thick and heavy. That helps this machine prove pretty manageable, but it’s still not a clean bill of health for this hybrid: when its two sections are combined it’s no thinner or lighter than dedicated laptops, and the tablet portion is still larger and heavier than the latest iPad.

The base unit serves up a USB 3.0 port, one USB 2.0 and a Gigabit Ethernet socket. The tablet offers better connectivity: a Micro HDMI connector, an SD card slot, a Micro USB socket and a headphone jack.

The buttons are all on the back of the tablet, with the Windows key, power button and volume rocker clustered into the top-left corner. Asus has ditched the Windows logo on the front of the tablet section – it was there on the previous generation of Transformer, but it wasn’t an actual Windows button and simply proved confusing. 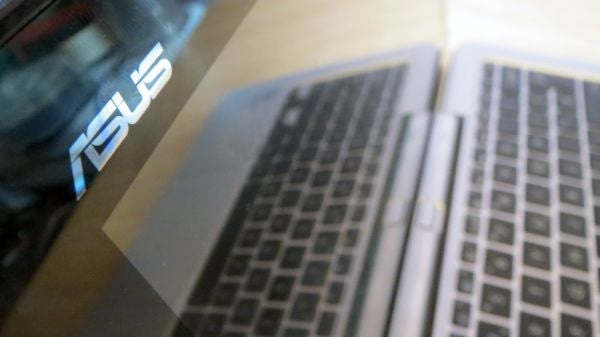 The Transformer has a 1366 x 768 touchscreen, which is what we expect on budget machines – but it’s too low for Full HD movies or proper multitasking.

The Asus got off to a good start with a measured brightness of 307 nits. That’s more than enough for indoor viewing, and it’s good enough for outside use, too. It’s brighter than the HP, but Lenovo’s IdeaPad 2 11 was brighter still.

The Lenovo may be brighter, but the Asus machine fought back with better contrast and black levels of 1059:1 and 0.29 respectively. That means colours will appear richer and darker tones will be deeper. It’s aided by good viewing angles, too – barely any brightness is lost when the screen is titled away.

The Asus’s screen is bright and with good contrast, but its colour accuracy isn’t great. The measured temperature of 7015K is cool, the Delta E of 5.36 is around one point behind the Lenovo, and the 62.4% sRGB gamut coverage level falls short.

Those latter figures fall behind the Lenovo, but they’re not as important – this isn’t a machine for serious work, where good accuracy and sRGB figures matter. The Transformer’s superior contrast is the key result here, and it means that the Asus’s screen will feel punchier and richer when browsing the web, watching videos and playing low-end games. 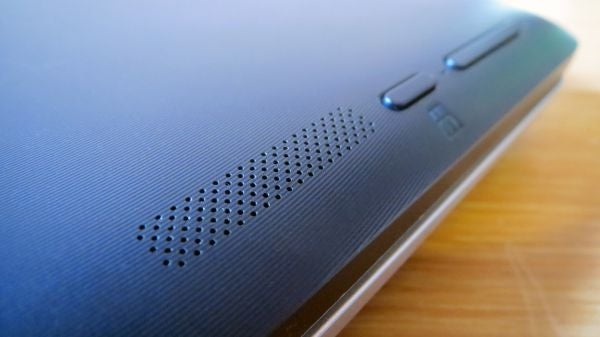 Asus has fitted surprisingly good speakers to the T200TA. The mid-range is meaty, and the high-end is snappy and well balanced – it’s not tinny, and it doesn’t overwhelm the rest of the audio. Bass drums aren’t too deep and basslines are largely lost, and there’s only enough volume to fill a small room – but the audio kit here is good enough considering this machine’s design and price.