What is the Asus Transformer Book T100HA?

The Transformer Book T100HA is the latest two-in-one convertible from Taiwanese firm Asus. This Windows 10-powered machine aims to offer users a fully functional tablet that can be converted into a laptop simply by docking into the bundled keyboard.

While it’s competent as a laptop and tablet, the £299 Transformer Book T100HA feels like a barebones device lacking a killer feature to differentiate itself from the growing sea of Windows 10 convertibles flooding the affordable laptop market.

The Asus Transformer Book T100HA feels like the rice pudding of convertibles. It has a fairly dull design – even by cheap Windows 10 convertible standards.

The separate tablet and keyboard sections are both made of a dark grey anodised aluminium and the Transformer Book has the standard, slightly pebble-like texture seen on most of Asus’ affordable convertibles.

Measuring in at 265 x 175 x 8.45mm and weighing 0.58kg, the tablet section is about the same size as most similarly priced Windows 10 slates. For example, HP’s competing Pavilion X2 has a tablet section that measures in at a slightly fatter 9.65mm and weighs 0.59kg. The Asus’ bundled keyboard adds 10mm to the device’s thickness and a further 0.46kg to its weight – though even with this padding the Transformer Book T100HA is still far from backbreaking.

The Transformer Book T100HA’s tablet section feels reasonably solid, though its polycarbonate back did give a little when met with even moderate pressure, which left me nervous about its durability if dropped. The same was true of the keyboard section, which noticeably flexed when met with heavy typing.

Making up for this, I found the keyboard reasonably comfortable to type on, despite being netbook sized. The keys are undeniably small and slightly crunched together, but have a snappy reactive feel and I never struggled to type on the Transformer Book.

The trackpad is also nicely reactive and recognised one- and two-fingered gestures hassle free – a factor that made document editing noticeably more pleasant than it is on most similarly sized convertibles, like the Pavilion X2.

Asus has also managed to load the Transformer Book T100HA with a reasonable selection of ports. The tablet section features a microphone/headphone jack, microSD slot, microHDMI socket and a USB Type-C charging port. Backing this up, the keyboard adds a full-sized USB 2.0 port.

I’m particularly happy to see the addition of USB Type-C. USB-C is a vogue item many smartphone and tablet manufacturers are adding to their products that’s designed to radically speed up devices’ charge times.

It can also be used as a regular port to connect external devices to the laptop. In these situations it offers improved data transfer speeds compared to regular USB 2.0 and 3.0 ports.

The microSD slot lets you add further space to the device’s 32GB, 64GB or 128GB of eMMC storage. 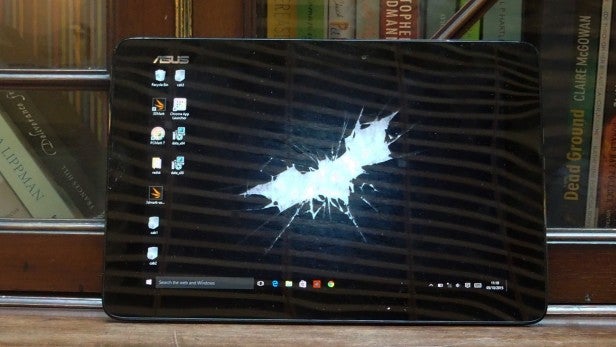 Even though it has similar specs to the HP Pavilion x2, which features a similar 10.1-inch, 1280 x 800 screen, the Transformer Book’s is noticeably better.

Blacks are deeper than the Pavilion x2’s and, while they’re slightly too warm for my liking, colours are rich and vibrant. Viewing angles are also decent and in general I was impressed by the Transformer Book T100HA’s display.

My only minor quibble with the screen is that it’s not Full HD. When you consider the fact that you could pick up the Toshiba Chromebook 2, which feature a stellar 13-inch 1080p screen and costs close to £60 less, I can’t help but be a little disappointed by the Transformer Book T100HA’s resolution.