What is the Asus Transformer Book Chi T100?

Asus’ Transformer
line has been setting the benchmark for convertible laptop/tablets ever
since the first Android-running model arrived in 2011. Now Asus is back
with a new range that runs Windows.

The T100 is the 10in model in the range, which also includes the 12in T300 and the 8.9in T90.
This makes the T100 the most directly comparable to a full-size iPad
with a keyboard dock. With a premium metal build, quality screen and the
full power of Windows it could be the ultimate crossover device.
Especially as it only costs £399…

On
design alone the T100 is on the money. Built largely from aluminium it
has that instant premium feel that a metal finish gives off. The lovely
deep, dark etched surface is also accented by shiny bevelled edges that
sit in perfect contrast.

Sadly the base of the keyboard section
is only plastic but it has a nice soft-touch finish and doesn’t have any
unsightly ventilation grilles or panels to upset the clean look. That’s
of course because there isn’t actually anything to cool or access
inside the base, with the hot work of processing all happening in the
tablet section. 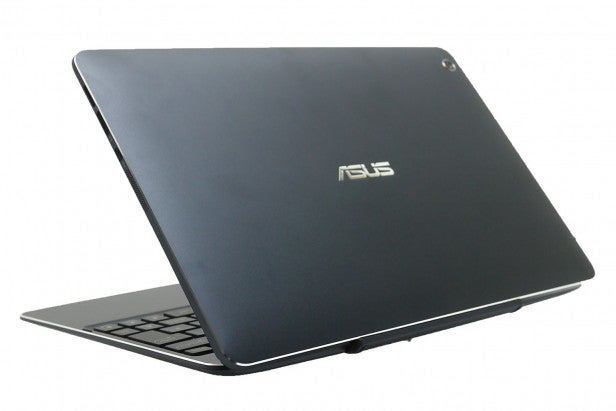 Where
the look falls down a little is in the fact that the screen/tablet
section is inevitably rather thick, giving it a top heavy look and feel
compared to a slim-and-light laptop. Despite this, the device is
reasonably stable, though you do have to be a little careful it doesn’t
topple over backwards, particularly if using it on your lap.

Being
a 10in device, rather than the larger 12in of the T300 Chi, the T100
still has that true tablet feel in terms of how much more compact it is
than a laptop. Its dimensions of 265 x 174.5 x 22mm just give it that
next level of portability.

This is an important point because
the T300 falls down because its size means it feels much more like a
laptop with a detachable keyboard than a tablet with an attachable
keyboard and when considered in this light it just wasn’t a good enough
laptop alternative.

Back to the T100, though. It is a little
thick at 22mm including its keyboard dock but not enough to really cause
concern. Moreover, Asus has dramatically reduced the overall thickness
and general clunkiness of previous Transformers by redesigning the hinge
mechanism.

Previous
iterations had a support section that sat behind the tablet, resulting
in an awkward-looking bump on the back. Here, though, Asus has managed
to do away with it, instead relying on chunky metal pins that slide into
slots on the tablet.

The two pieces are held together purely by
magnets, with no locking mechanism. This is more convenient when you
want to pull the two apart, but we did find that the two pieces would,
on occasion, come apart when we didn’t want them to. In particular this
occurred when performing any manoeuvre where you’re putting uneven
pressure on either side of the tablet, for instance lifting by one
corner or plugging in something to one of the side-mounted ports. 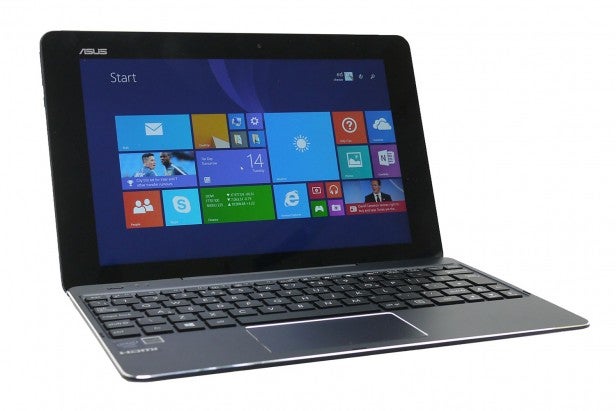 One
area where the T100 Chi feels a little behind the times is the size of
the device compared to the size of the screen. Where the likes of the
iPad Air have shrunk significantly compared to previous models, while
retaining the same 9.7in screen size, the T100 has the same wide bezels
and oversized body of a bygone era.

The effect is actually less
of a concern when using it as a tablet, but when in laptop mode it’s
very noticeable. Not that we’d necessarily want a smaller device, as the
extra chassis size allows for a bigger keyboard, but it would be good
to see a slightly larger screen on the next version.

One final
issue we have with the design is how easy, or not, the thing is to open.
Unlike a normal laptop, there’s no dent or sticky-out bit to help you
grip the two sections to prise them open. The result is quite a lot of
faffing around trying to get a grip on the two sides – it really is a
clumsy affair.


Packed into that 10in screen are 1920 x 1200 pixels, making this a
fairly high resolution display. The iPad Air packs in 2048 x 1536 pixels
so is a little sharper but it’s a close run thing. It’s also good to
see Asus has used a 3:2 aspect ratio rather than the 16:9 often favoured
by Android tablets. This means you get slightly more vertical
resolution, making for a more practical device for work when in laptop
mode and it’s a more natural-feeling size for tablet use too – it’s the
same as an iPad.

Inside, there’s an Intel Atom E3826 processor
with unspecified Intel HD graphics running at 533MHz. This is an
undeniably slow processor compared to even the Intel Core M used in the
T300 Chi, let alone the Core i5 models used in most proper Ultrabooks
such as the Dell XPS 13.

As
such, we have limited expectations for overall performance,
particularly as it’s only backed up by 2GB of RAM – this is very much
going to be a casual tablet device first and a laptop-replacement
second. Storage is variable with either 32GB, 64GB or 128GB available.

Connectivity
is going to be a potential stumbling block for some users. In the
pursuit of slimness Asus has ditched all full-size ports, so there’s no
USB or SD card reader. On the larger T300 Chi this same limitation felt
like a deal-breaker to us as its that much more of a laptop replacement.
Here, though, it’s more forgiveable.

Moreover, you do actually
get both a microUSB 3.0 port – with an adapter for connecting full-size
USB devices – and a microSD slot. So there are options there, just not
particularly convenient ones. There’s also a microHDMI and a combined
microphone and headphone jack.

You’ll
also find a microUSB socket on the keyboard dock as, unlike some
earlier Asus Transformers, the dock and tablet don’t share a common set
of batteries. Indeed this is perhaps the biggest let-down of this
device.

Where previous models could boast of 10+ hours of
battery life thanks to the dock including extra batteries to keep the
tablet going, here the tablet has to survive on its own while you’ll
also have to keep the Bluetooth keyboard dock charged separately –
thankfully its battery life can be measured in weeks and not hours.