What is the Asus Transformer Book T100?

The Asus Transformer Book T100 is a fairly low-cost 10-inch Windows 8 tablet that can also function as a laptop thanks to its keyboard segment. It’s not the first affordable Windows 8 hybrid Asus has made – last year’s VivoTab Smart ME400 is still on shelves – but it is easily the best thanks to a practical laptop-style hinge. This isn’t a true laptop replacement thanks to its relatively low-power Atom processor, but for £349 it is a great-value, flexible device.

If you want to see the Transformer Book T100 in action, check out our video review below.

Although the Asus Transformer Book T100’s closest relative might be the ME400 — because both run Windows — the design owes a lot more to the Transformer Android tablets Asus has made for the past three years, like the recent Asus Transformer Pad TF701T.

Rather than having a wireless keyboard or one that behaves like a ‘cover’ case, the Asus Transformer Book T100 uses a full laptop-style hinge. With the keyboard module attached, the T100 could easily pass for a small laptop. It is not what everyone is after, but this a much more convincing laptop-tablet hybrid than the older ME400, which uses a wireless keyboard that attaches less securely using magnets. 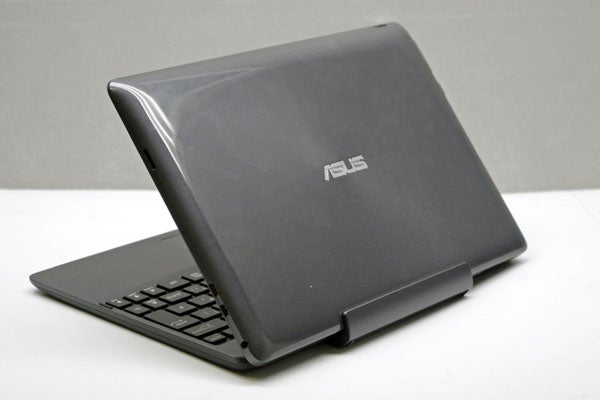 Unlike Asus’s more expensive Android-powered Transformer devices, the Asus Transformer Book T100 is not made primarily of metal. Some metal is used in the hinge’s inner workings to provide the requisite strength, but this is a largely plastic tablet.

It wears quite an array of finishes too. The back of the tablet part is extremely glossy, the keyboard surround is faux brushed metal and the bottom of the keyboard bit is soft-touch matt plastic. Three different finish types rob the Asus Transformer Book T100 of design cohesion, but it – surprisingly enough – largely gets away with it.

Aside from the keyboard keys, the inner hinge and the screen surround, the T100 is coloured in a slightly moody dark blue. It’s this careful colour-matching that stops the multitude of finishes from making the T100 look a mess. It looks fairly good, in fact, and a little lower-key than the shiny aluminium of the Transformer Pad.

The Asus Transformer Book T100 also suffers from no serious build issues despite the slightly lower-grade construction. A glossy tablet rear doesn’t feel fantastic on the fingers, but the T100 is solidly-made, and the screen covering is Gorilla Glass, providing good anti-scratch protection. 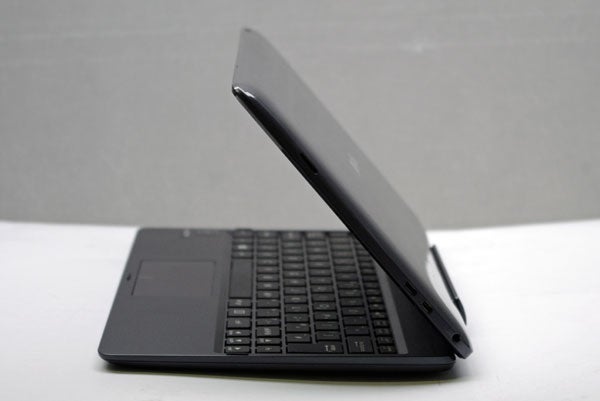 However, as we noted in the last Transformer tablet we reviewed, the screen bezel is pretty chunky, giving it a less ‘modern’ appearance than something like an iPad Air or Google Nexus 7. We find it less of an issue here as – quite simply – there are very few particularly good-looking Windows tablets. In the nerdy world of Windows 8 tabs, the Asus is a bit of a looker.

Practicality-wise, the design is spot on for an affordable hybrid. The keyboard module and tablet are around 550g each, and between 11-12mm thick. Separated from each other, neither is remarkable. There are thinner, lighter 10-inch tablets and nothing too notable about the keyboard’s design. They make a great team, though.

At around 1.2kg, the Asus Transformer Book T100 only weighs as much as a light Ultrabook. And, like any normal laptop, the keyboard part protects the screen when it’s stashed in a bag. That Asus has been producing devices like this for years really shows in the execution of the hinge too. It’s strong, but elegant and faff-free – you just press a clear silver button on the inside to release the locking mechanism. 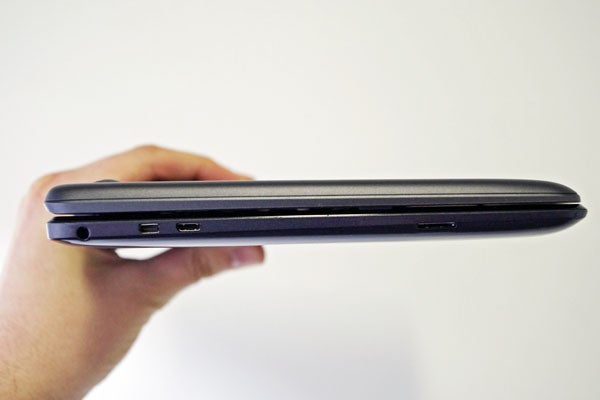 One limitation is the extension of the hinge. The Asus Transformer Book T100 opens-up smoothly like a ‘real’ laptop, but it locks at about 135 degrees, in order to ensure it doesn’t fall back too readily. As so much of the weight is in the screen part here than a normal laptop, it will tip over if placed on bent knees.  However, Asus has clearly put some thought into providing balance by making the keyboard part a little heavier than the screen, even though it doesn’t incorporate its own battery.

Unlike some other Transformer tablets, the keyboard part doesn’t add masses of connections. It brings a single USB 3.0, letting you plug in a mouse, external hard drive or other accessory.

The tablet has a micro MDMI video output, a microSD memory card slot, headphone jack and microUSB port. It’s a simple setup, but keeps the tablet easy to operate. Our favourite aspect is that the microUSB is used for charging and data transfer – rather than a proprietary port. This means that you can use an Android phone charger can be used to charge the battery (a 2A charger is needed for full speed charging, though). 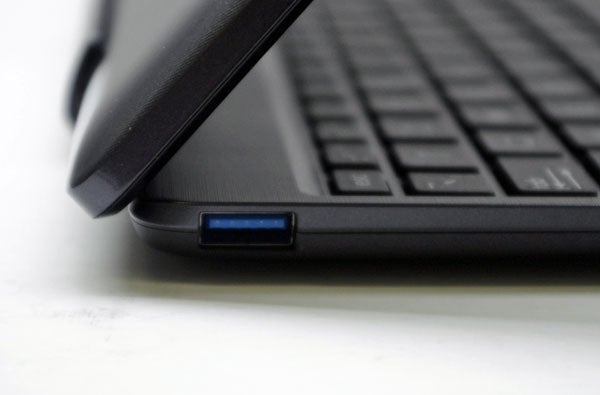 There’s just one hardware oddity.  The Windows logo on the front is not a Home/Start button – it’s just a logo. Its actual Windows button is a bit of plastic on the side, next to the volume rocker. We assume this makes the Asus Transformer Book T100 cheaper to produce, but it’s not as handy as it would be up-front.