This is where Asus’ otherwise decent device falls down. The Intel Celeron chip really doesn’t like being asked to do too much. At times, Windows was so slow I wondered whether there was an issue with the trackpad not registering my clicks, only to be surprised by 3 different windows opening when the chip eventually caught up and registered what I’d clicked on.

There were even slight pauses when opening tabs in Chrome and trying to visit web pages with loads of pictures and content will mean waiting while the TP200 catches up. Clicking on the battery icon on the task bar, an excruciatingly simple task, became one of the most frustrating. Every time I wanted to check how much battery the machine had lost, it took two or three seconds after clicking on the icon for the info to pop up, and sometimes longer. At first I just thought Windows wasn’t responding so I would click again. This would then get rid of the pop up when it eventually decided to load, and I’d have to reclick. It’s a negligible issue when you think about it, but when combined with loading pauses in other software and the annoying amount of pop ups from the mounds of bloatware included, it becomes pretty irritating. 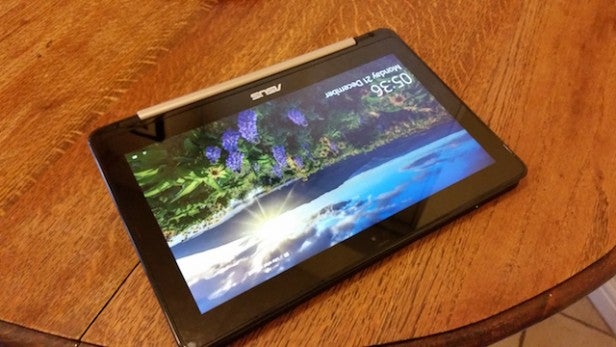 I had the TP200SA for a couple of weeks. It worked during that time and I could carry out word processing, basic internet browsing, and movie-streaming and the TP200 felt as though it was just about capable of keeping up. But after a few months, as the hard drive fills up, I dread to think how slow this thing could become. It would all depend on how well you maintain your system, but for the average user looking to fill up the hard drive with various files, just be aware that the TP200 could very well become that painfully slow Windows laptop you never use.

The review model I had included 2 GB of DDR3L 1600 MHz SDRAM, and a 32GB eMMC hard drive. You can increase the storage to 64GB eMMC or go for the full 128 SSD version.

And this is where the TP200 reveals one major issue. The 32GB eMMC storage arrived almost full, with only about 4GB available. This meant that installing the benchmark software proved to be something of an ordeal as I tried to uninstall enough of the bloatware to be able to add 3DMark. It got to the point where, after the installation failed for the thousandth time, I was forced to give up trying to install 3DMark. The same was true of PCMark which couldn’t even begin installing because of the lack of memory. Beware, if you want to actually, you know, use your laptop, the 32GB model of the TP200 is just not going to cut it.

On the performance tests we managed to carry out, the Intel Celeron Dual-Core N3050 processor proved why Asus’ laptop is not going to wow you in this department. On the multi-core Geekbench test the TP200SA scored 1,637 which is the lowest score I’ve seen for a while. It puts the device in the range of the Acer Iconia Tab 8 tablet, which scored 1,805. But the TP200 did come in far above the its cousin, the Asus Transformer Book T100HA which scored 587. Despite this, 1,637 is a decidedly low score so don’t expect to be doing any major gaming on the TP200. Although you needn’t worry as it probably won’t let you install any games anyway.

Unfortunately, this machine comes with a lot of bloatware. Asus has packed it with extra programmes, and not just the ones that sit quietly in the start menu, but the type which will hound you for registrations and updates.

I’m not sure whether this list is exhaustive, as it seems likely some programme hidden in the depths of the hard drive was just waiting to interrupt me, but the bundled software included Asus Live Update, Asus WebStorage, Asus Giftbox, eManual, Asus On-Screen Display, Asus Install, Asus FlipLock, Splendid Utility, USB Charger Plus, WinFlash, and of course that app you can’t do without, Asus Five in a Row. Is it too much to think that Windows could function perfectly well without all these helpful-sounding yet perpetually irritating apps? 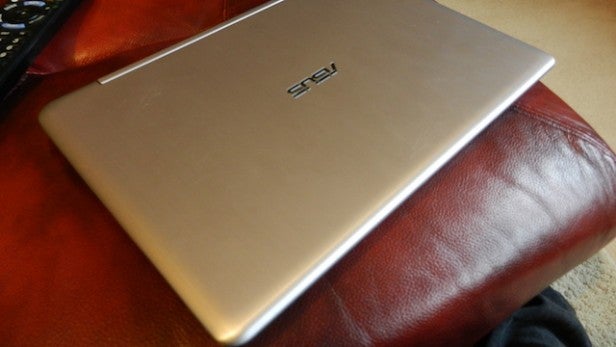 On top of this, the performance issues make all the notifications that much more likely to induce an aneurysm. Waiting for the slow CPU to open a window you clicked on is annoying enough but waiting for it to load a window you didn’t even want to open is trying to say the least.

And it’s not just Asus programmes. Evidently the company has teamed up with Dropbox and is intent upon making you aware of this. Pop-ups asking me to register were sometimes interrupted by other pop-ups from McAfee, whose LiveSafe Internet Security also comes with the laptop. You’ve also got Flipbook, Netflix, Trip Advisor, Twitter, Evernote, Candy Crush Saga, and more pre-installed, although these apps didn’t actually interrupt me with notifications. It’s all a bit much really.

What’s more, this laptop feels like it’s pushing the limit in terms of being able to run Windows 10. It manages it, but with the frequent pauses it feels as though if you lowered any of the specs even slightly, this thing would be unusable.

That said, it’s nice to have a budget machine, particularly a hybrid, which will run Windows 10. It’s just a shame that it the OS can gets so slow at times. 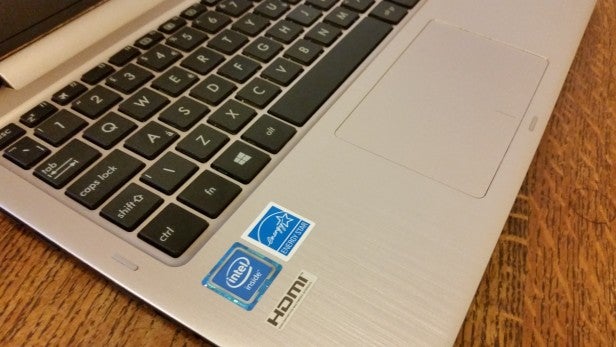 What’s interesting about the TP200’s sound quality is that despite producing audio that is devoid of low-end, at higher volumes the speakers still cause the whole case to rumble. Listening to music on the two stereo speakers, which are placed near the front of the underside of the laptop, I noticed that the sound was pretty uneven and that certain frequencies seemed emphasised.

Not only this but the TP200 struggled to play music without the sound cracking up. Listening to music on Youtube proved impossible as the sound from the laptop frequently went into meltdown, fizzing and crackling as the sound card failed to do its job. What’s more, the bloatware popups made themselves even more irritating by playing a tone every time they appeared. This meant that even if the laptop had managed to play the tracks without the sound issues, the songs would constantly be interrupted by various dings and bleeps as the TP200 reminded me to install this or that extra software.

Basically, this isn’t a laptop for listening to music on, what with the poor sound quality, performance issues affecting playback, and the numerous notifications interrupting you. You probably won’t even use it for watching any videos if the sound issues persist. And if these problems are common across all these devices, and not just unique to my review unit, this could even be a deal breaker.