What is the Asus Tinker Board?

Single-board computers have become very popular over the last five years, with the Raspberry Pi getting in on the act early on, winning the hearts and minds of children, teachers and coding hobbyists with its low price, easy software and vibrant community.

The Tinker Board, then, is Asus’ attempt not so much to cash in on this world of single-board PCs, but offer a slightly more premium piece of hardware to sate the demands of enthusiasts who want better performance. It’s a commendable effort and it is a great piece of hardware, but software and support is a real sticking point.

Asus Tinker Board – Design and features

Although at first glance it looks just like a Raspberry Pi 3, some tweaks to the Tinker Board’s design help it feel more like a premium product. The board is covered with icons depicting its various functions, so you’re unlikely to get your camera and display connectors mixed up.

The general-purpose input/output (GPIO) header is colour-coded, too, to help you see what pin is what (red for 5V, for example, and black for ground). The Tinker Board’s pins have the same layout as the Raspberry Pi’s, to make transferring over your projects simpler. There’s also a stick-on heatsink in the box, which you should use as the SOC gets far, far hotter than the Pi’s under load. 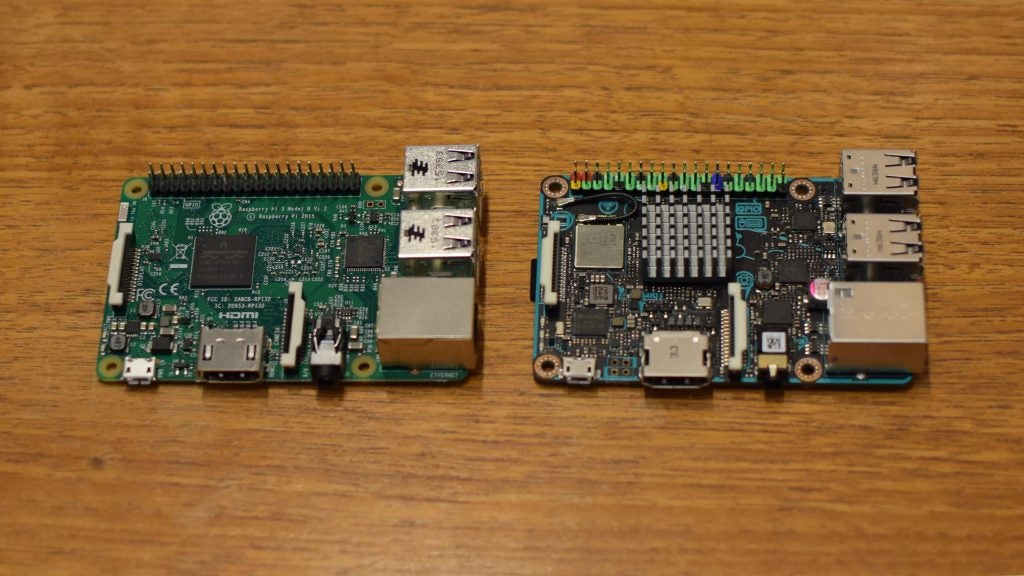 Raspberry Pi alongside the Asus Tinker Board; the most noticable difference is the additional heatsink and coloured IO connectors on the Asus (right)

The Tinker Board has a faster system-on-chip (SOC) than the Pi 3: a quad-core Rockchip RK3288 running at a maximum 1.8GHz. It also has double the RAM. Asus claims some lofty speed increases over what it euphemistically calls a ‘Competitor’: the benchmarks listed on the Asus site show double the CPU and GPU performance compared to the Pi 3.

On top of the faster chip and extra RAM, there’s also Gigabit rather than 10/100 Ethernet, an upgradable Wi-Fi antenna and an uprated sound chip. Asus also claims faster SD card and USB storage performance and, as the Ethernet connection has its own dedicated controller rather than the Pi’s USB-to-Ethernet bridge, no reduction in LAN speed during USB data transfers. 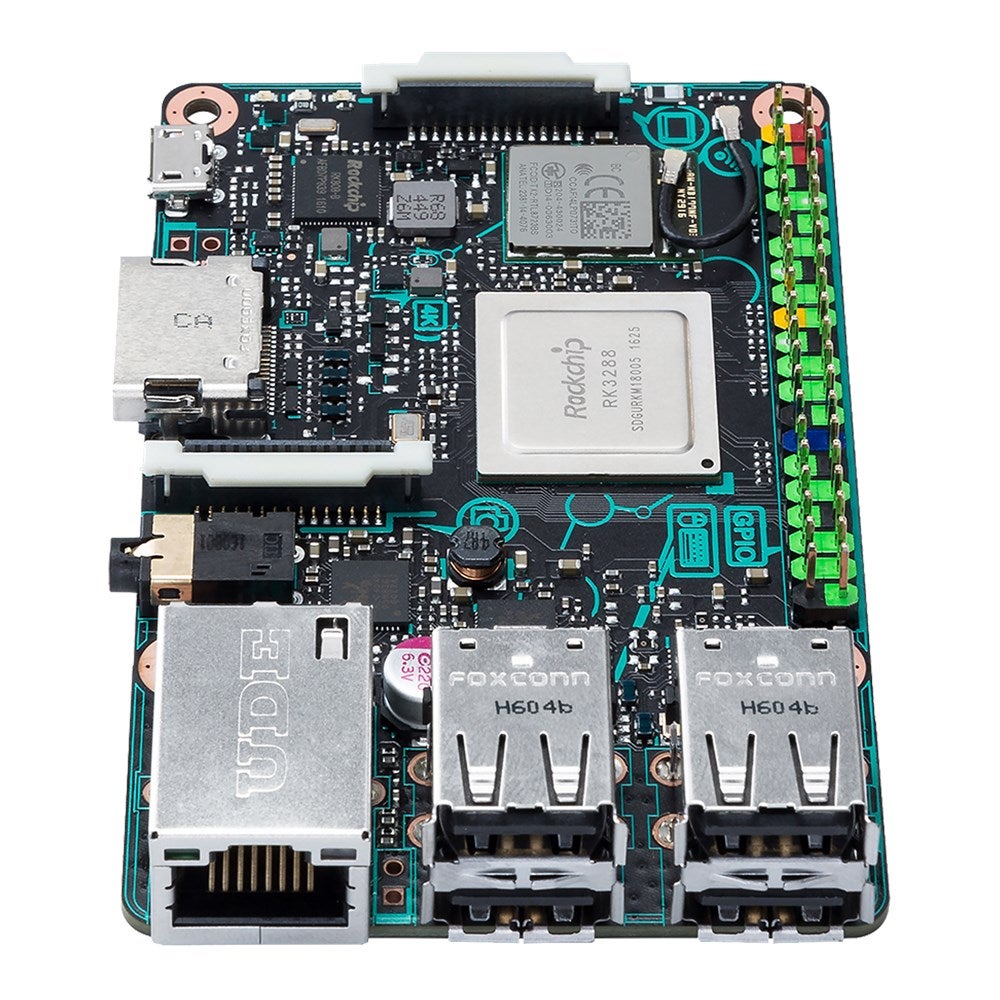 When you buy a Raspberry Pi, you also get a whole bunch of help to get it working. The website is full of useful information and the NOOBS installer makes installing the Raspbian operating system, or one of several alternatives, a breeze.

The Tinker Board is much more hands-off, which will be fine for some but a roadblock for others. You’re told to download the Win32 Disk Imager application, then use it to write an ‘image file’ (about which there is no more information) to an SD card, then boot up the Board. In the end, if you scroll right to the bottom of the Tinker Board web page, you’ll find the disk images to download: one Debian-based Tinker OS, and one based on Android.
Related: Best Raspberry Pi projects

Tinker OS boots very quickly into a no-frills desktop with the lightweight LXDE (Lightweight X11 Desktop Environment) window manager. What’s striking is how stock everything looks. There’s no customization or theme to make it look pretty. It’s a far cry from the pretty Raspbian desktop. There’s very little installed by default – you have to install LibreOffice yourself if you want word processing and spreadsheet capabilities.

The desktop runs smoothly, though, and it was simple to get online with both wired and wireless connections.

The first thing I do with a new Linux system is to install all available updates, with the sudo apt-get update and sudo apt-get upgrade commands. Unfortunately, this crashed halfway through on the Tinker Board, so I was unable to make sure the system was updated – storing up software problems for the future. I tried this on both the latest stable 1.8 version and the latest beta, 1.9, with the same result. For me, this is quite the red flag. 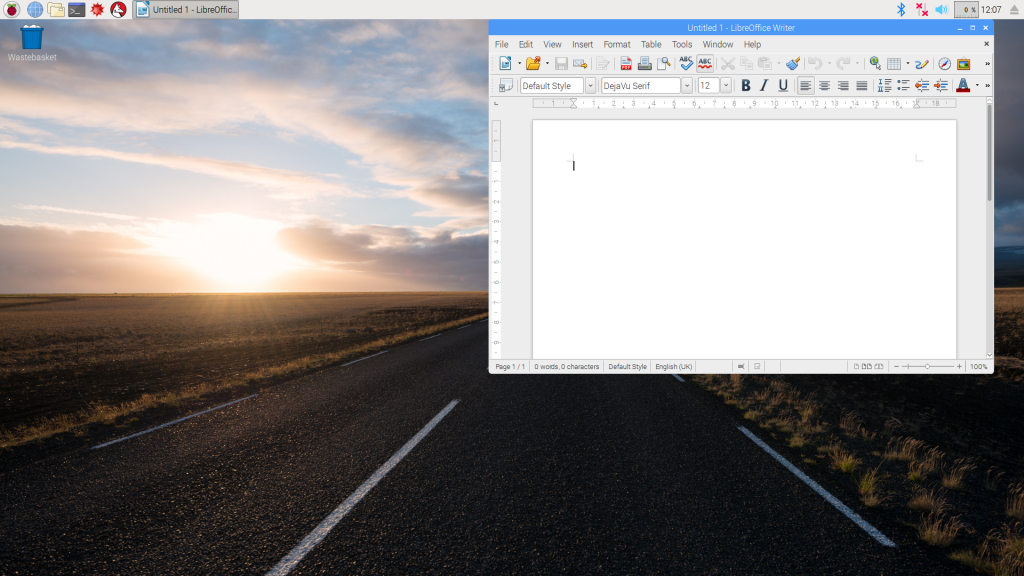 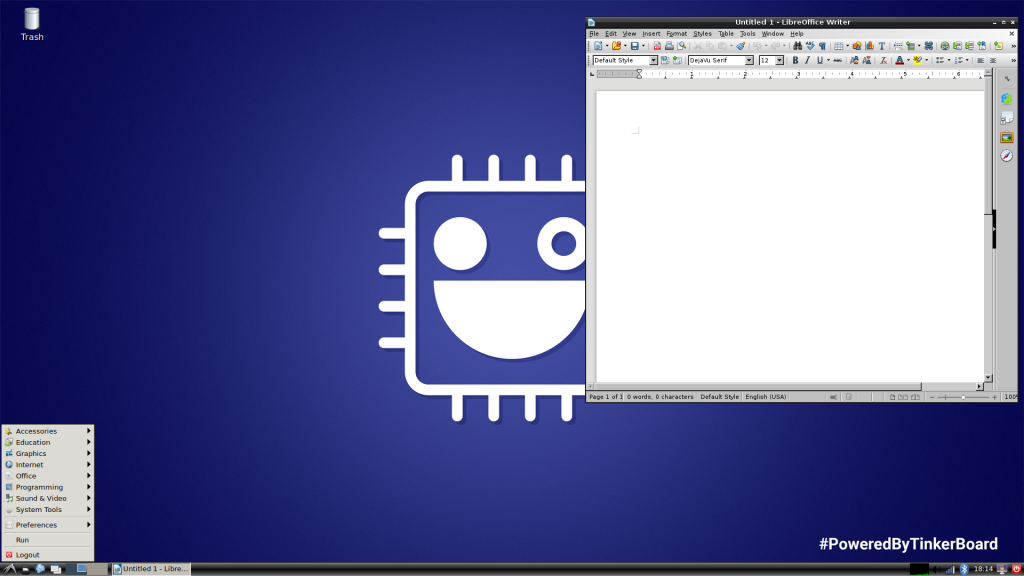 Another potential problem was the board’s default security settings. The Tinker Board has the default username and password of ‘linaro’ (as stated on the Tinker Board’s own website). It also has SSH enabled by default.

This means that, until you change the Tinker Board’s password, anyone on the same network can find its IP address with an application such as Fing for Android, then connect to it over SSH with full root access. The Raspberry Pi handles this much better: having SSH off by default, then warning you if you log in via SSH with the Pi’s default password.

From a newcomer’s standpoint, then, the Tinker Board is probably a bit of a non-starter. With the community still very much in its infancy and Tinker Boards only just heading out into the real world, it’s going to take a while before there’s a decent amount of documentation for beginners. This doesn’t make it a bad product by any stretch, but given that Asus compares the Tinker Board with the Pi (not by name), I would have expected a little more from a multi-billion dollar computer company.

The Tinker Board also supports Kodi, if you’re looking for a speedy media center.

Along with its basic Debian distro, Asus also provides an Android Tinker OS download. This runs remarkably smoothly on the Tinker Board, and browsing the web using Android is actually a more pleasant experience than with the Linux version of Tinker OS.

The first difficulty is getting the screen resolution to something usable on a 1080p display. These instructions helped, but you still won’t have a nice clear native 1080p resolution. The other hurdle is getting Google Play on the device: even after installing Google Play Services, Google Services Framework and the Play Store from the the various link suggested here, I still had endless crashes from the Google Services Framework.

I was happy with the Tinker Board’s overall performance. The desktop feels snappy, and you can really feel the extra power compared to the Pi when opening and switching between tabs in Chrome. The benchmarks I was able to run bear this out, too. In the Raspberry Pi version of Roy Longbottom’s Whetstone benchmark, the Tinker Board managed 1,395 MWIPS, compared to 710 for the Pi 3.

There was also a huge gap in the web browser-based benchmarks. In the Octane 2 benchmark, I saw 7291 from the Asus board, compared to 2752 for the Pi, while the Asus board was twice as fast in the Browserbench MotionMark test, with 4.99. I also tested Asus’s claims regarding USB transfers, and found that it could transfer files from an external USB hard disk around 10% quicker than a Pi 3.

The Tinker Board is certainly quick for a tiny computer, but don’t be fooled that it’s going to replace your laptop: browsing complicated web pages such as the Guardian can still be a jerky and frustrating experience. Also, don’t think that the Tinker Board’s graphical horsepower will let you get into your Linux games: I could barely get past the menu screen on shooter Alien Arena, let alone play the game.

One thing the Tinker Board certainly can do, however, is play HD and 4K video. On a Raspberry Pi, the open-source film Tears of Steel is jerky when played through YouTube on the Chromium browser. It’s smooth on the Tinker Board. The Tinker Board could also play the downloaded 4K version of Tears of Steel smoothly, using its built-in hardware-accelerated media player. This 4K support also shows off another of the Tinker Board’s tricks: it can drive a 4K monitor over HDMI, if only at 30Hz.

Should you buy the Asus Tinker Board?

From a hardware point of view, the Tinker Board is excellent. I like the helpful icons on the board, the colour-coded GPIO pins and the included heatsink. There’s also no doubt that Asus’ board is far faster than the competition.

However, the quality of the software and support is nowhere near what you get with a Raspberry Pi. The Pi’s Raspbian OS is slick, finished and well documented, while Tinker OS feels unfinished and documentation is minimal. The Tinker Board may appeal to hardcore tinkerers who may be able to fill in the software gaps themselves, but most people, in particular beginners, would be far better off with the cheaper Pi 3

A solid piece of hardware for experienced tinkerers, but Pi-standard support and community is still a long way away.