The Asus Strix 7.1 is a premium,
multi-channel gaming headset that packs in five drivers in each ear
piece for true 7.1 surround sound. Coupled with a desktop volume
controller that can also take audio inputs from other sources such as
games consoles and you have a truly versatile and highly capable gaming
tool.

Oh, and the earcups have glowing eyes in them…

The
Strix 7.1 headset is no shrinking violet. Large, angular, touched with
flashes of orange and with great big glowing orange eyes in the earcups,
it’s quite the sight. The earcups even have an eyebrow shaped section
that means this headset really does look like some sort of menacing owl
when the earcups are folded flat.

There is a touch of subtlety
in that the rest of it is mostly black but for the most part this is a
headset that means to be seen. 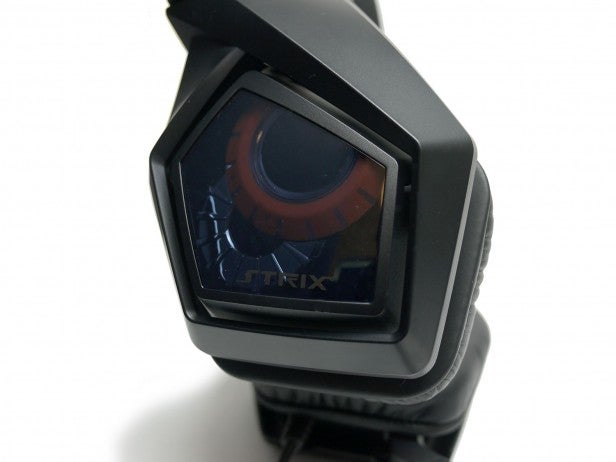 While
there is a nod to portability in the earcups being able to fold flat,
it’s a token effort. Flat or not this thing still takes up the same
space as a dinner plate and is a good couple of inches thick when laid
flat. What’s more the cable isn’t removable. In fact that’s an instant
black mark to our minds as it means the headset is ruined if the cable
gets damaged. Removable ones ensure you can simply swap in a
replacement.

Although nearly all plastic, overall build quality
is decent with big chunky pieces used throughout. The leather-covered
padding of the earcups and very-stretchy headband is ample and plenty
soft enough too.

Along with the headset itself comes a desktop
volume control. This follows the same design ethos of lots of angles and
orange lights. It’s well built too, with a decent heft to it. Combined
with three large rubber feet on the underside and you have a unit that
generally stays put, unlike some flimsy lightweight volume controllers
that just get dragged along by the headphone cord.

As
well as giving you an easy way to adjust volume, the desktop unit is
also the heart of this headset. It can be used to adjust the balance of
the surround sound speakers (front, centre, side, back, sub) as well as
turn the lighting from ‘on’ to a breathing effect and switch between
different sound spectrums – EQ settings, basically. 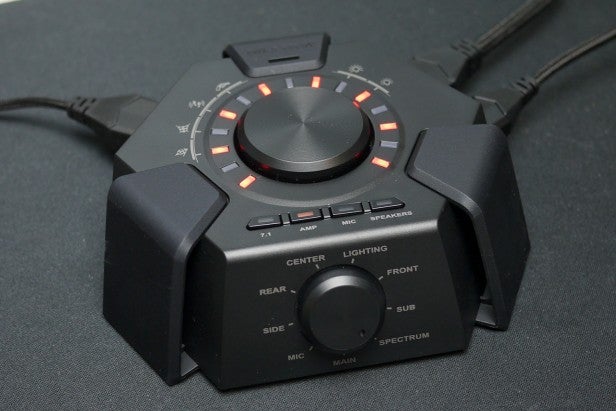 These
are all adjusted via the front selection dial and a top-mounted digital
volume dial, with surrounding lights used to show the selection or
level. It’s a simple but effective system, though a more prominent
marker on the front dial would be useful to tell which settings you’re
adjusting.

Four buttons along the front also allow you to choose
between 7.1 channel audio and conventional stereo, switch on the
in-built amp to boost volume, turn the mic on/off and engage the
speakers.

The latter option is for switching to a second sound
source. This can come either straight from an HDMI source or via the
quad-jack to HDMI converter included with the headset – the idea being
you can hookup a games console and enjoy surround sounds without
disturbing the neighbours. The headset can receive either stereo, 5.1 or
7.1 audio signals with the side drivers turned off for 5.1 output and
the side and read drivers turned off in stereo mode.

The headset
itself also attaches via an HDMI cable, again emphasising how it would
be completely ruined were the cable to be damaged – this would be no
easy fix.

As for connecting to your PC, the volume controller is also the sound card so connects via two USB plugs. 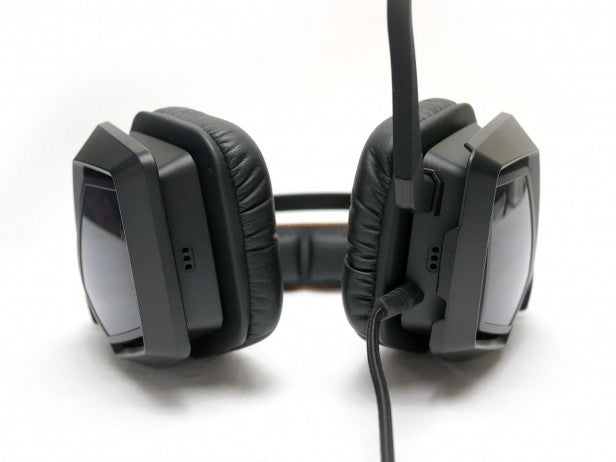 Looking
again at the headset, each earcup packs in five drivers to create its
surround sound effect, with each earcup having a ‘center’ and sub driver
of its own, as well as front, side and rear.

You might think
the eye pattern would correspond to the driver arrangement but that
isn’t the case – the design was inspired by them, perhaps, but doesn’t
incorporate them.

A detachable microphone slots into the left
earcup and thankfully it uses a standard 3.5mm jack socket so can be
replaced by an alternative if the original is lost or doesn’t suffice.

There’s
also a microphone in the USB hub which is used in conjunction with the
headset mic to offering background noise cancelling. 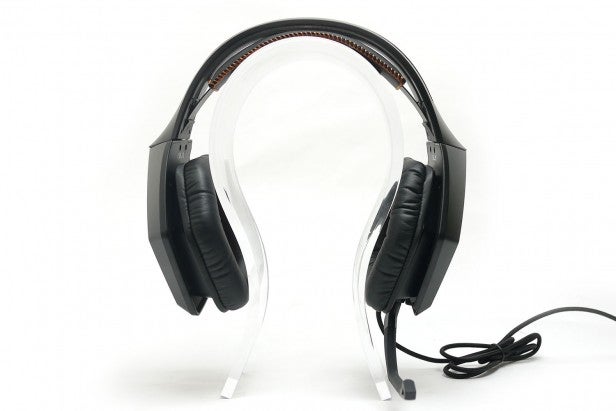 Asus Strix 7.1 – Comfort and ease of use

Setting
up the Strix 7.1 is a breeze with Windows instantly recognising and
installing the controller as a 7.1 speaker system that shouldn’t need
any configuring. If you want to listen in stereo mode rather than
surround you can just tap the 7.1 button on the controller and it’ll
flip to a normal stereo presentation.

Likewise, if you want to
switch to another source, it’s just a button tap away, while the dial
surround-balancing system works really well – we were setup and ready to
go in no more than a couple of minutes.

Sadly, we were less taken with the ergonomics of the headset.

For
a start, we’re never fans of folding earcups on large headsets as they
just make the headset unwieldy, with the whole thing flopping around and
being far more difficult to put on and remove as well as find a secure
place to lay them when not in use. 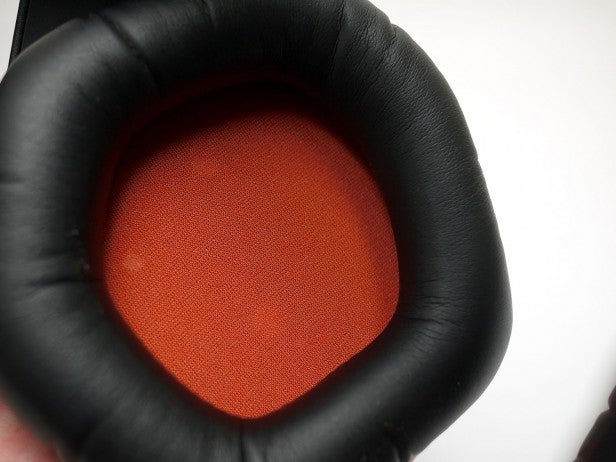 More
importantly, though, the earcups themselves aren’t all that
comfortable. Understandably they’re fairly large so that all the drivers
can be squeezed in but we just find them a bit too cavernous, resulting
in them moving too freely on our ears.

There’s also no means of
adjustment, with them instead relying on the stretchy headband to find
the right balance. However, we found they sat just a little low for our
liking.

The earcups also don’t pull out very far meaning you have
to squeeze your head in to get them on, plus they do creak quite a bit
if you move your head.

Thankfully the padding and headband are
reasonably gentle so there’s no long term discomfort from any pressure
points. The large volume of internal air also means your ears don’t get
too sweaty. 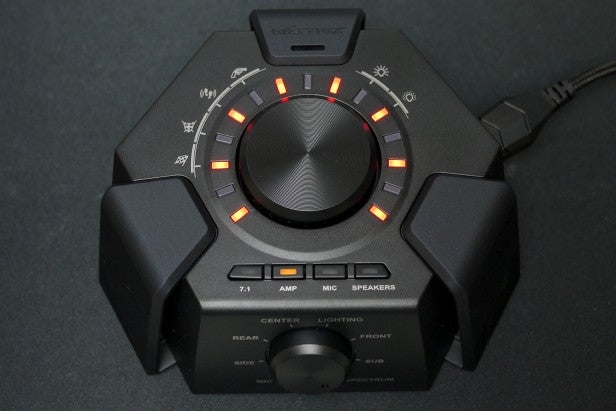 In
terms of day to day stereo listening the Strix 7.1 are definitely a
step up from your average gaming headset but don’t blow us away when it
comes to music.

Bass is as high in the mix as you’d expect for a
gaming headset, and there is an impressive depth to it here, thanks to
those separate sub drivers. It also comes over without muffling the rest
of the presentation making for a fairly easy-going fun sound that still
has detail.

There’s definitely a lack of top-end sparkle,
though, and the mid-range is just a little low in the mix. The result is
that cymbals fizz rather than shimmer and vocals sound a little flat.

All told, they’re adequate for music but nothing special. 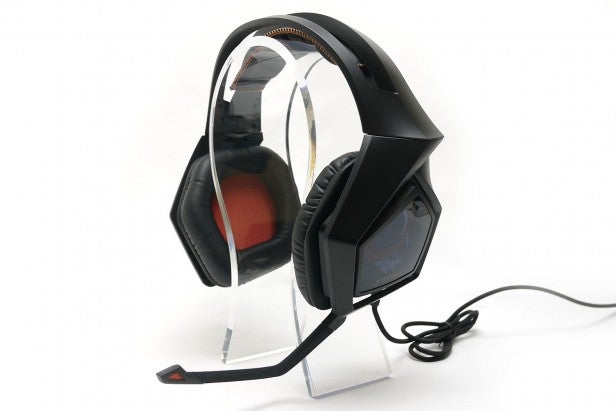 It’s
switching to surround mode where they really come alive. While the
overall sound quality doesn’t change, the surround presentation is
excellent. Movies are far more immersive as sounds dance around you
while gamers are given a distinct competitive edge as it becomes much
easier to pinpoint the direction sounds came from.

As ever with
surround sound in games, the audio balance can be a little off, with
things like character footsteps and the rocket jump sound in Titanfall
sounding like they’re coming from behind you rather than… well, from
you. Largely, though, these are a big step up from stereo headphones
when it comes to hearing the virtual world around you.

As for
the noise cancelling microphone, it does an excellent job, delivering
clean, crisp audio. We also particularly liked the mic arm which can
really easily be bent to whatever position is needed. 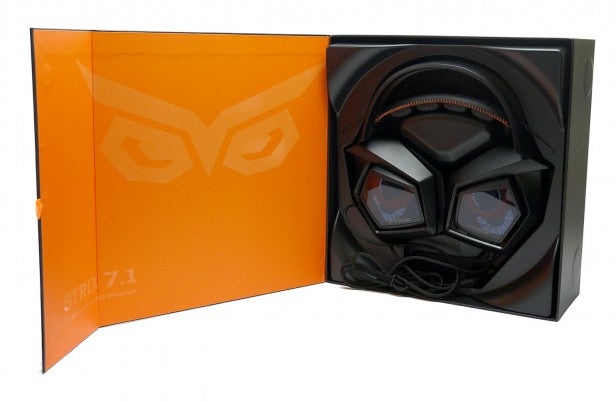 The
Asus Strix 7.1 is a great gaming tool that brings impressive surround
sound to both PC and console gamers. Its accompanying desktop controller
is also a useful and easy to use addition.

The headset isn’t
the last word in sound quality, particularly for music, but for the
price it’s about the level we’d expect given all the other features
you’re getting here. Plus, the surround sound experience is excellent.

However,
we didn’t find the headset particularly comfortable and it had an
annoying habit of creaking. Also, we’re always wary of headsets that
don’t have removable cables. Headphone cables break – it’s just a matter
of time – and the system used here would be nearly impossible to
replace it the worst were to happen.

That, and we just aren’t into having glowing eyes on the side of our head.

Don’t think the Asus Strix 7.1 is for you? Then check out out Best Gaming Headsets roundup.

The
Asus Strix 7.1 is a great surround gaming headset that will be a great
addition for gamers that don’t have a surround-sound graphics card and
do also have their console next to their PC. In one unit it’ll provide
surround sound gaming for both. However, we’re just not that into the
styling or fit and we’ve concerns about spending so much on a system
that doesn’t have easily replaceable cables.