A couple of months ago we reviewed the Asus Striker II Extreme. Despite the high price we were very impressed by the 790i Ultra SLI chipset as it crams in just about every feature you could wish for and then some.


Good though it was, with the Striker II NSE, Asus has done the sensible thing and come up with a way for you to save a modest amount of money but not lose too much in the way of features. It’s unclear what NSE stands for (unless it’s ‘Not exStreme Edition’) but we do know that the difference between the Extreme and the NSE comes down to the chipset. The Extreme uses the nForce 790i Ultra SLI chipset while the NSE uses the nForce 790i SLI. The missing Ultra part doesn’t make a whole heap of difference to the key features as the NSE comes with three graphics slots that support the latest Core 2 Penryn processors with Tri-SLI.


What ”does” set the two apart is the NSE strikes out on its own path when it comes to memory support. Both the Extreme and NSE have four DDR3 slots and officially support memory up to 1,333MHz but the 790i Ultra SLI adds speeds of 1,600MHz, 1,800MHz and 2,000MHz for when you’re overclocking. By contrast the NSE ‘only’ supports speeds up to 1,600MHz. That ‘only’ is deliberately placed in inverted commas because the lack of support for 1,800MHz and 2,000MHz memory is of little consequence to all but the most extreme of overclockers and dropping it is well worth a saving of £25. 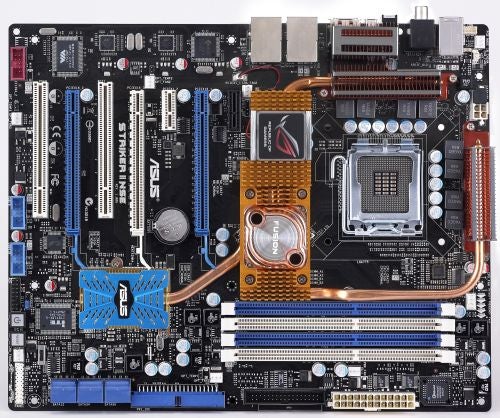 The layout of the NSE is identical to the Extreme which is to say that it is very good. The Fusion cooling system looks great, is securely fixed to the chipset and power regulation hardware and gives you plenty of options for hooking up the CPU and system coolers of your choice.


There are also three PCI Express graphics slots that support Tri-SLI, though it’s not a perfect set-up as two of the slots have 16 lanes of PCI Express Gen 2.0 while the third slot is original PCI Express. Presumably you’re considering an Nvidia chipset because you want to run SLI – if you plan on using a single graphics card then an Intel P35, P45 or X48 will get you the same performance and features for less cost in both power consumption and initial outlay.


Back to the board at hand, other neat features include the external LCD Poster, the Reset button on the I/O panel, the flick switch to clear the BIOS and a PCI Express x1 slot above the top graphics card that accommodates an audio riser card. You can read about those features – and more – on the original Striker II Extreme review.

Testing the NSE threw up a couple of curious issues. Our sample was supplied with BIOS 0305 and Asus sent through version 0403 as an update but neither the Windows-based Asus Update utility nor the updater in the BIOS would accept the file. The update failed with a message that ‘the file wasn’t recognised for this model.’ We’ve had similar problems with two other Nvidia chipped Asus boards in recent months so there appears to be a common theme developing. Rather than booting into DOS and forcing the issue – with the very real possibility of bricking the NSE – we played safe and stuck with BIOS 0305.


The other issue was our power supply which is an Enermax Galaxy 850W. We were testing with a single GeForce 8800GT and the system refused to start until we changed to a tiddly Antec 550W PSU. We’ve had similar trouble in the past with AMD motherboards from Sapphire but these tended to be low or mid-range models that have a low power draw. It was a real surprise that the NSE didn’t have enough of a kick to spur the Enermax into life. 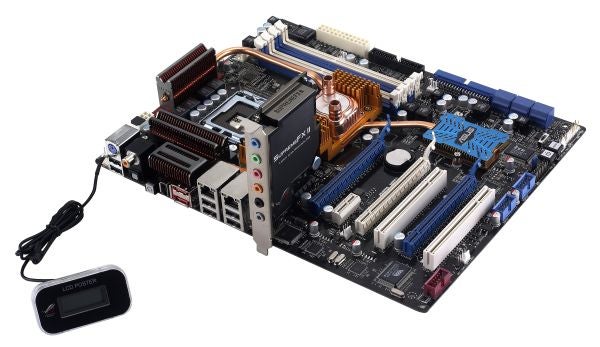 The Asus BIOS has a colossal list of options but despite that the layout is clear and logical. We knew our Kingston KHX13000 memory would require extra voltage so we used the hardware monitor feature to check the default voltages and then got busy overclocking. We raised the CPU voltage from 1.28V to 1.45V, RAM voltage from 1.64V to 1.9V and the Northbridge MCH voltage from 1.31V to 1.56V.


We had no trouble raising the clock multiplier from 9x to 11.5x on the stock 333MHz front side bus which raised the CPU speed from 3.0GHz to 3.83GHz. Naturally that increased performance handsomely but we were unable to raise the front side bus by any useful amount and still complete PCMark Vantage.


So far we had kept the RAM speed at 1,066MHz but we needed to look at memory speed to see whether the NSE could match the Striker II Extreme. Raising the memory speed to 1,333MHz was easy enough but couldn’t maintain the same memory timings. We had to slow the settings from 7-7-7-20 to 8-9-9-26 which resulted in lower performance than running the memory at 1,066MHz with tighter latencies. Going for broke we bumped up the memory to 1,600MHz and had to slow the latencies ever further to 8-11-11-30. This lowered performance even further and convinced us that memory speed is pretty much irrelevant on a standard front side bus.


Based on our results you’d be well advised to buy the NSE rather than the more expensive Extreme but you’re still spending a small fortune for the privilege of running SLI.